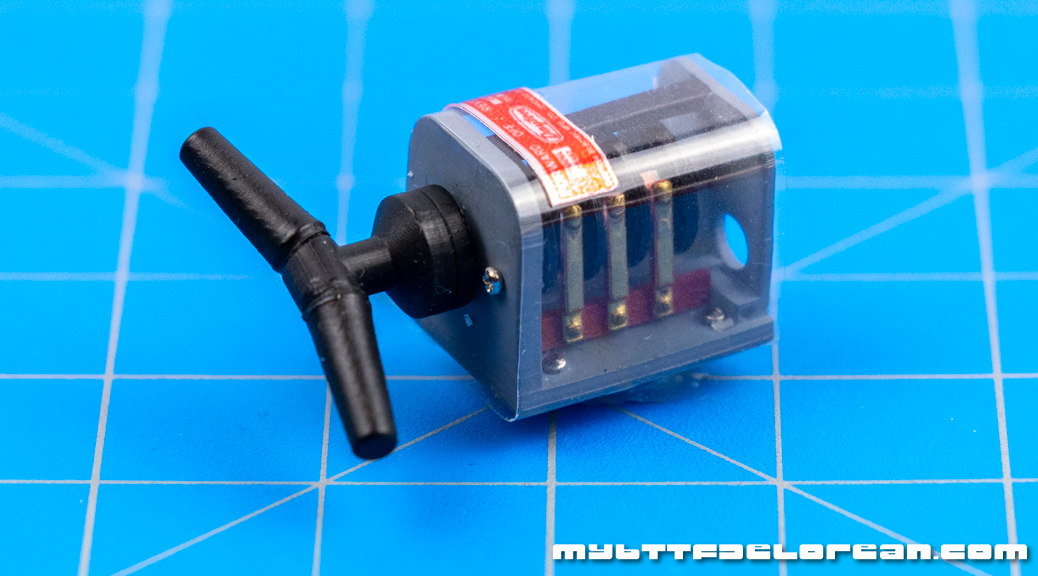 Almost daily, I am surprised by the talent of the modding community that has swarmed around the Eaglemoss 1:8 scale Back to the Future DeLorean

partwork build. Many of us know about the big players like Model Modz and Mike Lane. But, there are other builders (such as Darren Gurney and Bill Will Green) who create other unique mods that bring even more realism and detail to the build. Rafel Lin is one of those builders, and deserves some of the spotlight as well.

Online, Rafel goes by the name Rallbart. He has long had a Shapeways shop full of detailed 3-D printed bits for our models. I have been interested in a lot of those parts for a while. But recently, he has begun selling completed mods.

One of his latest projects is this beautiful replica of the TFC Switch that is typically installed during Issue 43. While the Eaglemoss version is comprised of 3 pieces of plastic with a sticker, Rafel’s is handmade from eighteen different pieces of steel, aluminum, acrylic, and 3-D printed resin. It also includes accurate paintwork and miniature bits that really bring it to life. See for yourself: When you compare it to the Eaglemoss part, the improvements are remarkable. I found a photo online of the original part to show the differences (I borrowed this photo and will replace it with one of my own when I get the relevant issue):

The cost of Rafel’s TFC Switch is €39 plus shipping. It is quite delicate, but the handle turns as expected. If you feel details like these would improve your build experience, reach out to Rafel and pick one up! He can be reached via his YouTube channel and can ship anywhere in the world. It only took about a week to get mine.

Until next time, thanks for visiting!