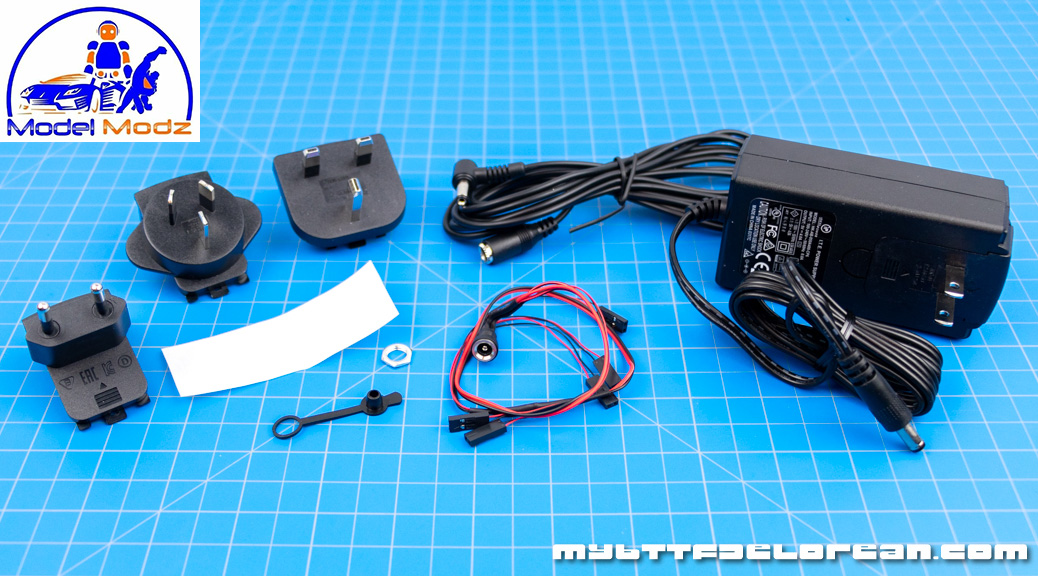 Normally, our Eaglemoss 1:8 scale Back to the Future DeLorean

is powered by three AAA batteries. For normal operation of the stock build, this is fine. However, it is likely insufficient to power any additional electronic modifications, such as EL Rope or a custom Flux Capacitor/XMAS tree. Also, the stock circuit board draws power even when no lights in the car are on, so the batteries die faster.

To the rescue comes Corrie and Chloe from Model Modz! They have created The Power Mod kit that replaces the use of batteries with an AC/DC adapter and custom power wiring. It is built in the UK and costs £40.

For an additional £4, you can also have this inline power switch: 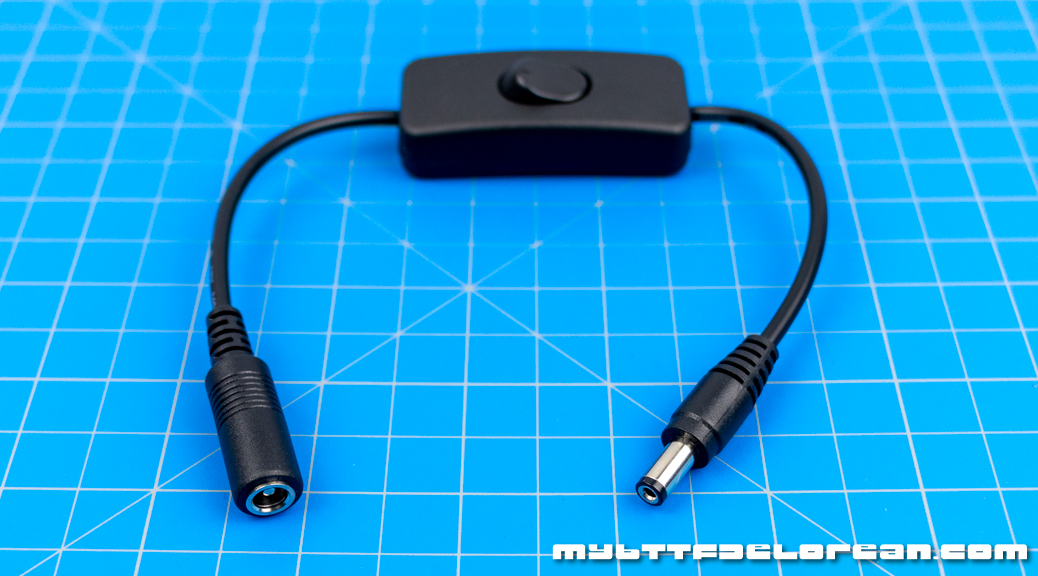 I knew very early on that I would be adding custom modifications to my DeLorean, so I ordered The Power Mod back when I started the model. It had been sitting here waiting for me to get to the appropriate steps in the build and today is that day! Now, it is time to share my installation with everyone else. Let’s go!

NOTE: As of this writing, I was only at Issue 34 in the build so these steps are based on that level of completion. If you are farther along, you may have to remove additional parts of your model to access some of these components. Also, I have painted a lot of my parts and added other small details (see my MODS page), so your model may look a little different.

You will need to decide if you are going to keep your original Battery Box and power cable installed. The Power Mod can be installed with them in place, but I saw no need to the keep either one. Also, if you plan on installing The EL Light Mod from Model Modz in the future, this Battery Box will have to be removed anyway. If you choose to uninstall them like I did, you will first need to remove these three Tabs holding down the old power cable: 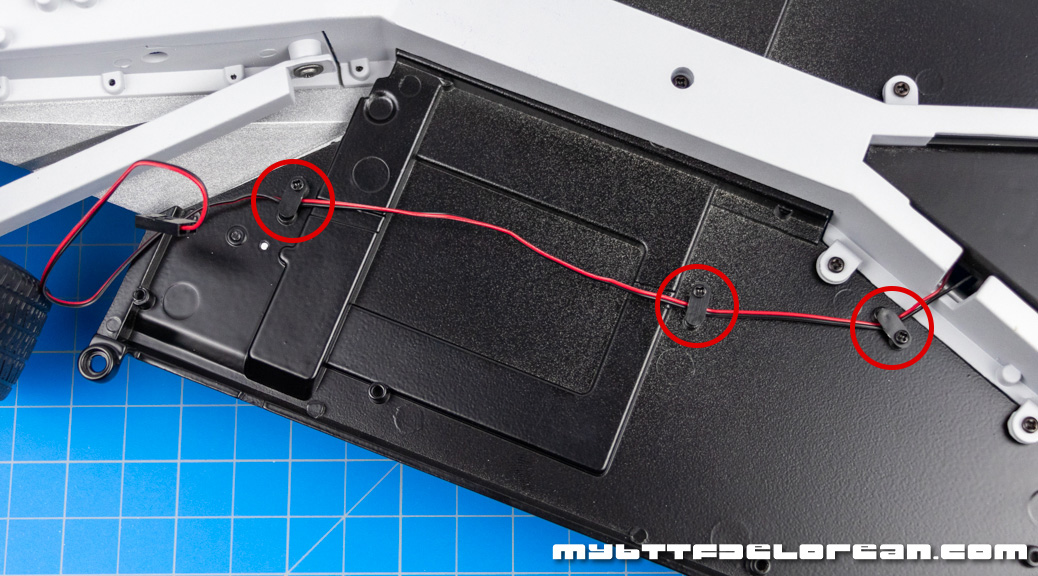 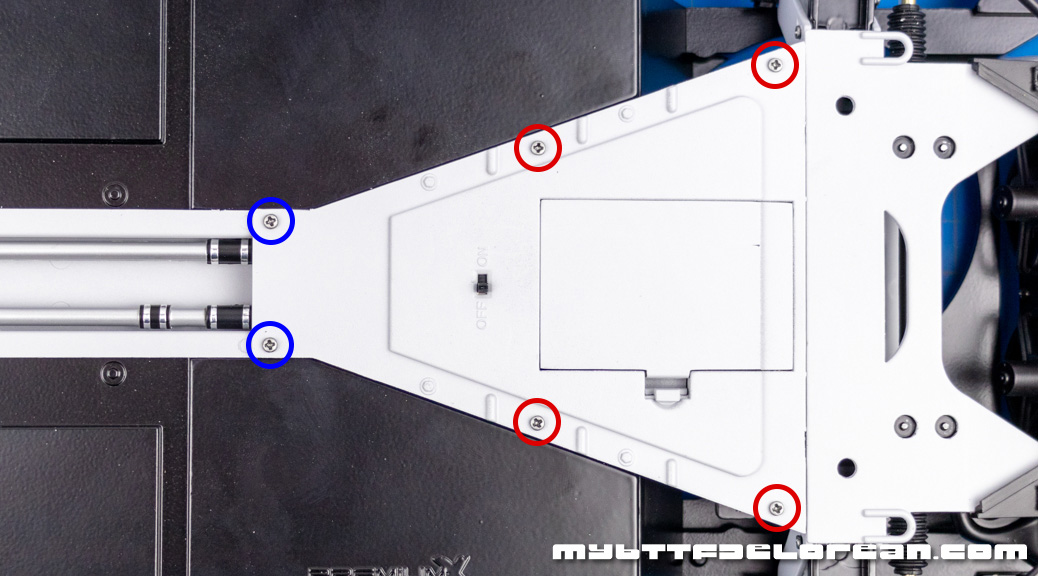 If you are uninstalling the Battery Box (like I did), remove these three (3) FP screws and take the box, switch, and power cable out of the car: 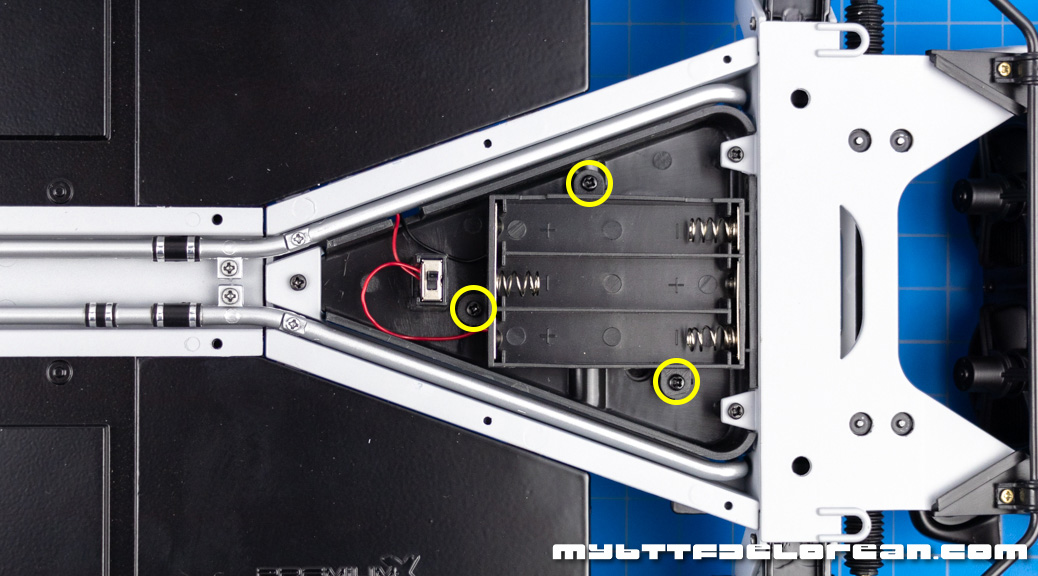 You should be left with an empty Fuel Tank, like this: 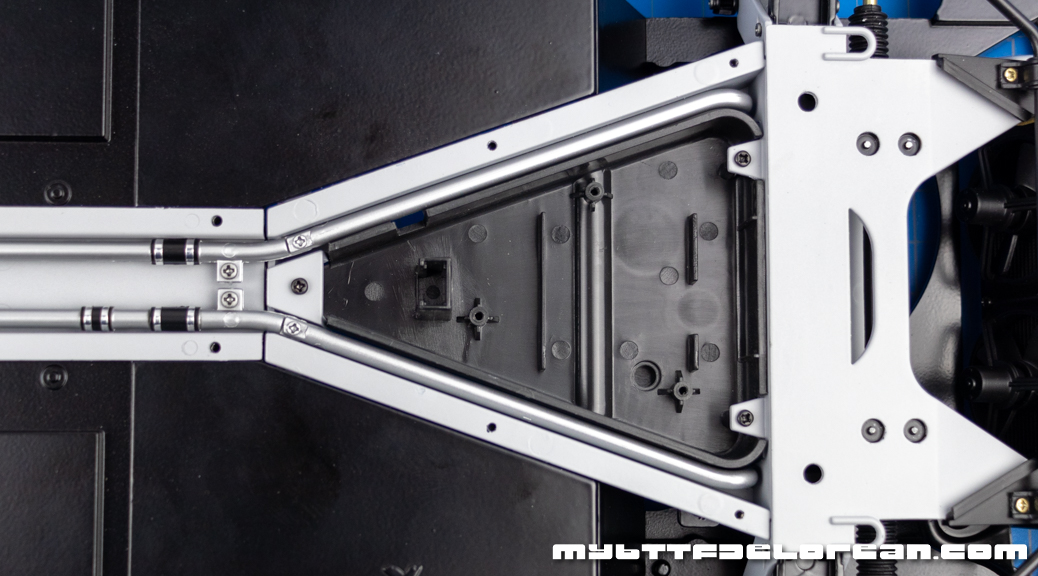 Next, we will need to drill an 5/16″ (~8mm) hole into the Fuel Tank Cover. Start with a smaller bit to initiate the hole, then move up to larger bits until you get to the final size. If you start with the large bits, you could chew up your Fuel Tank Cover.

I tried to center it between the rectangular switch hole and the raised ridge of the cover. Any farther to the rear and The Power Mod socket will not fit down into the Fuel Tank: 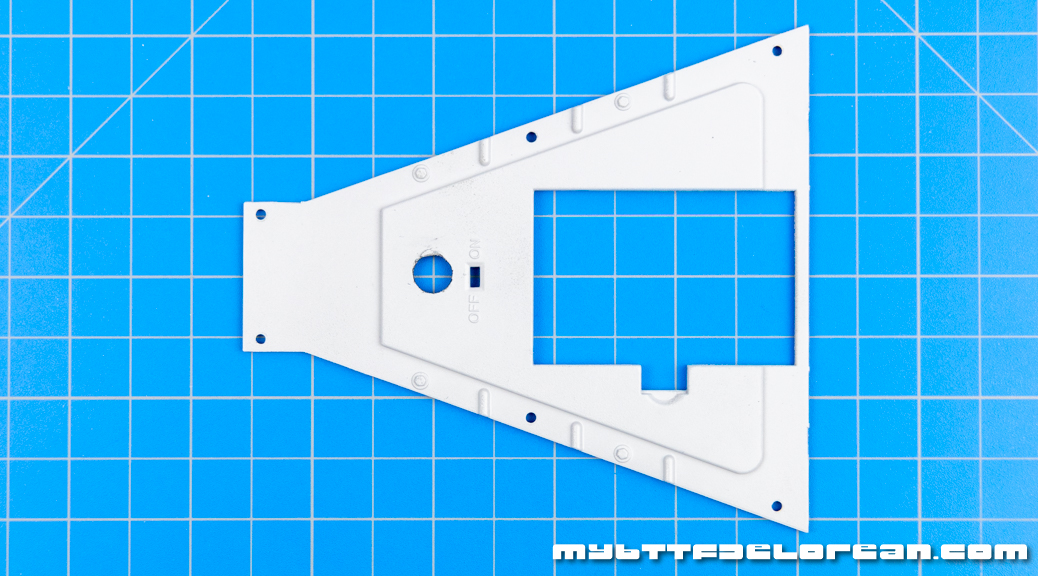 Now it is time to start prepping the The Power Mod cable. If you want to add the included rubber dust cover, you will need to feed all of the plugs and wires through it first: 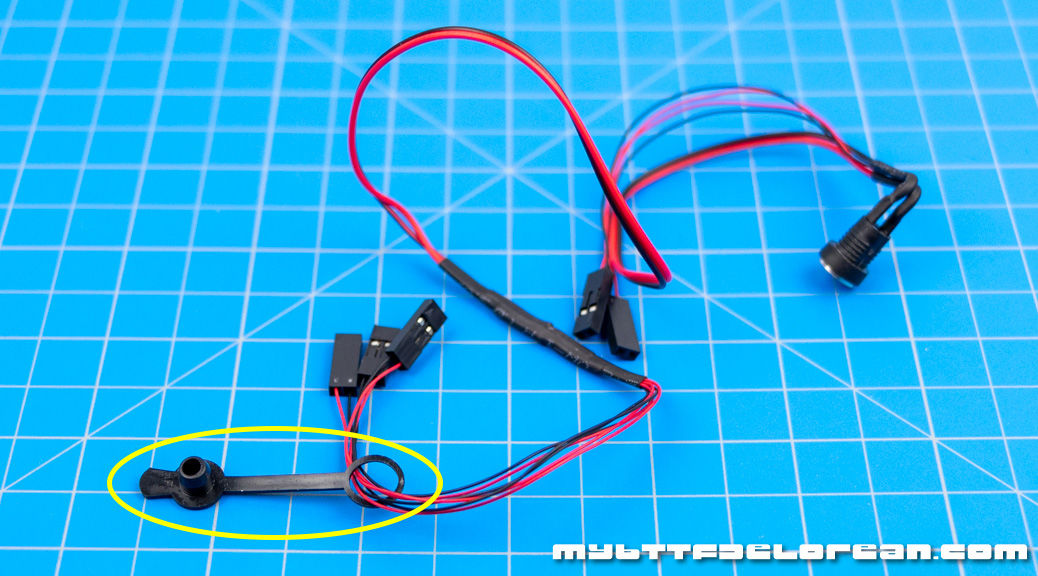 Continue to move it along the cable until it is resting up against the barrel socket, like this: 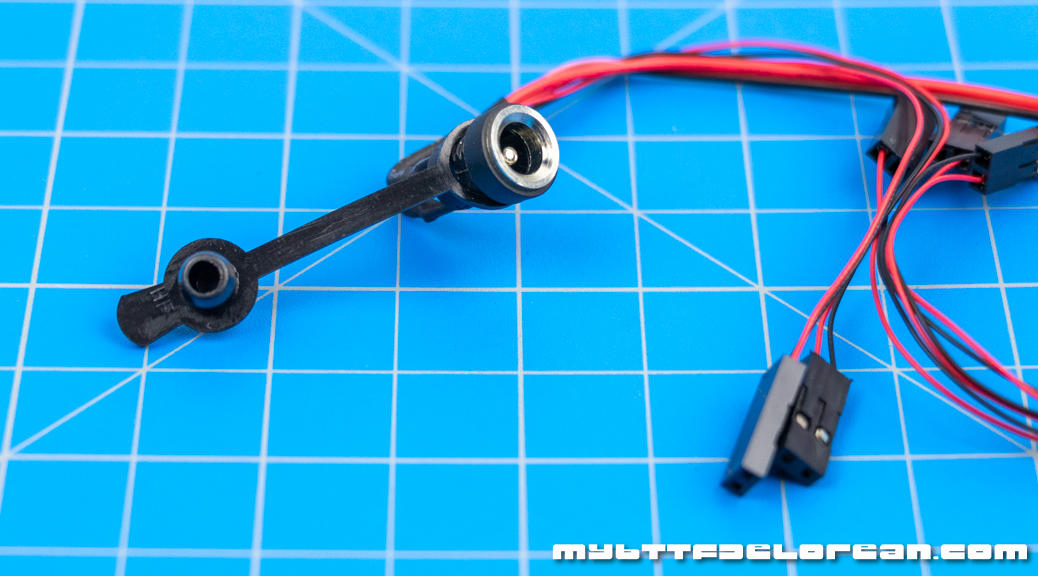 The next step is to begin routing all of the plugs and power cable through the hole we drilled into the Fuel Tank Cover. Insert the plugs one at a time as space is limited: 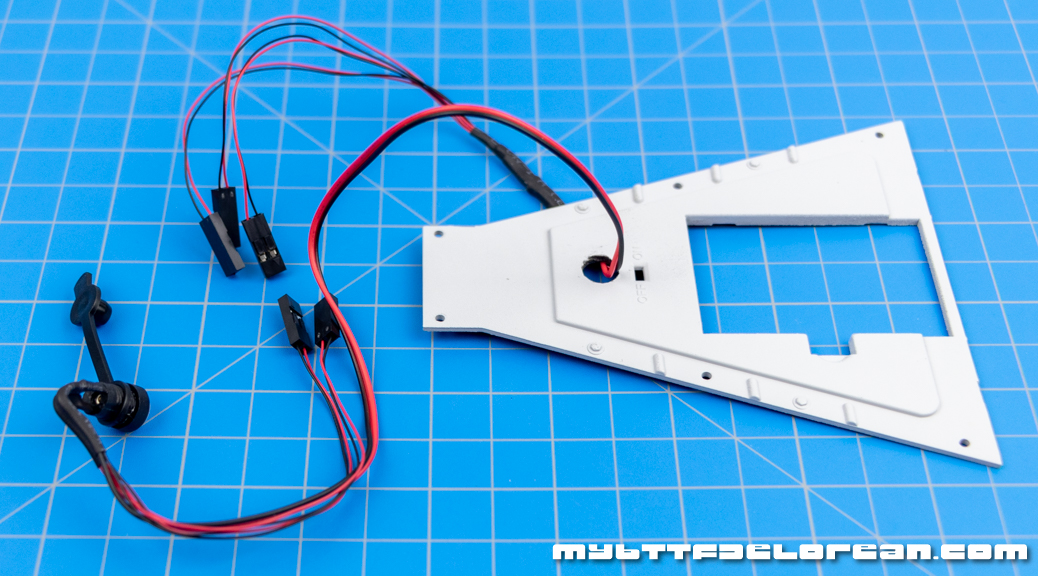 Continue to feed all of the plugs and power wire through the hole until the socket is sitting flush on the Fuel Tank Cover, like this.

This is a good time to decide which direction you want the rubber dust cover to face. After I took this photo, I rotated the cover to be parallel to the old switch hole and facing the ON side: 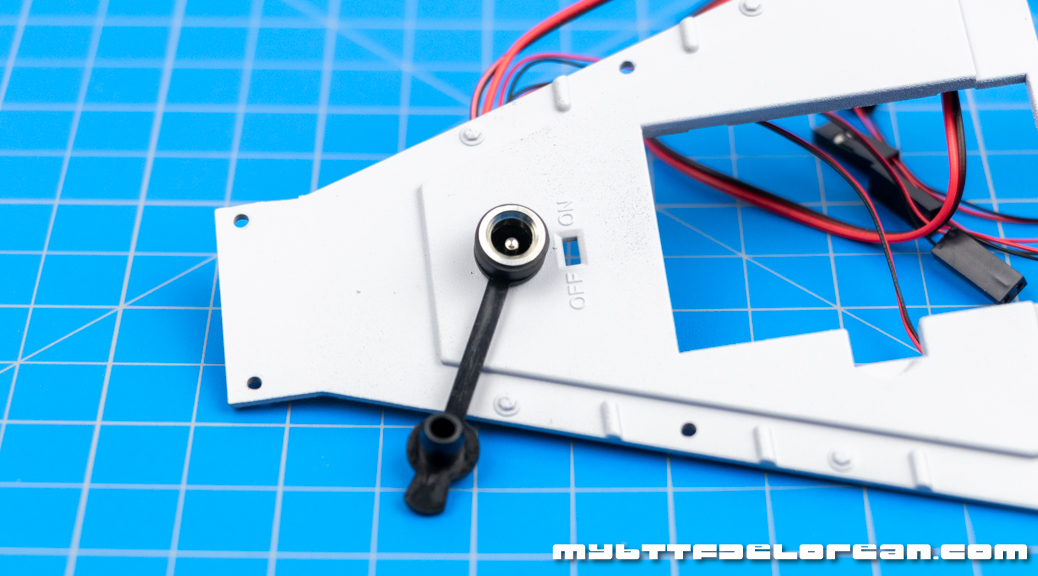 To secure the barrel socket in place, we need to install the included nut. Start by sliding the nut over the ends of the power cable plugs.

This is exactly like adding the rubber dust cover. Feed one plug at a time through the nut to make it easier: 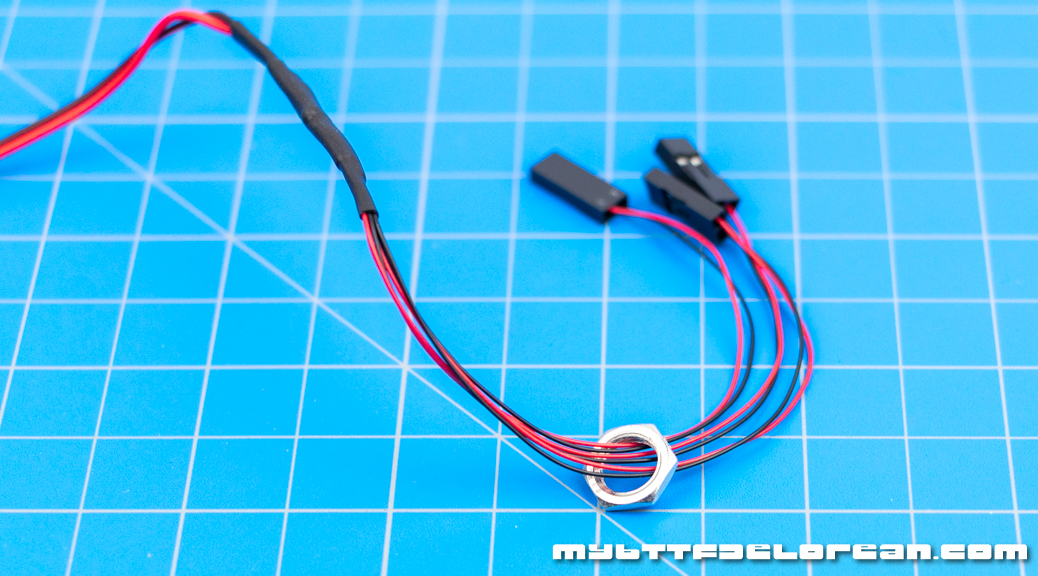 Feed it all the way along the power cable and plugs until it can be screwed over the barrel socket, like this.

Before you use a wrench or some pliers to tighten this nut, be sure to orientate the wires (and rubber dust cover) as desired. I chose to face them towards where the notch in the Fuel Tank will be: 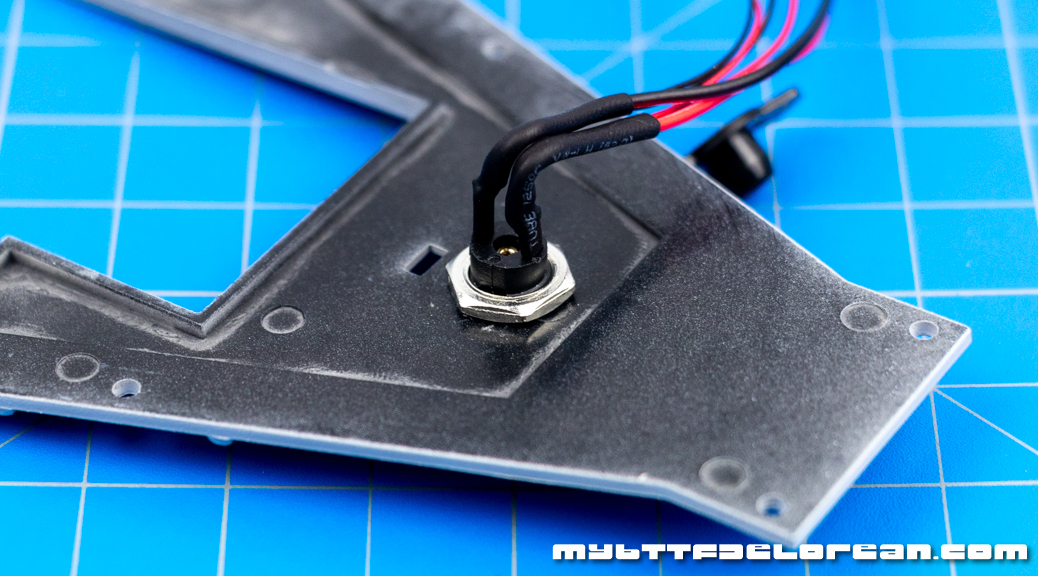 With the socket secured, we can now bring back the car and start the final steps of installing The Power Mod. Begin by feeding the plugs of the new power cable through this notch in the Fuel Tank and Chassis: 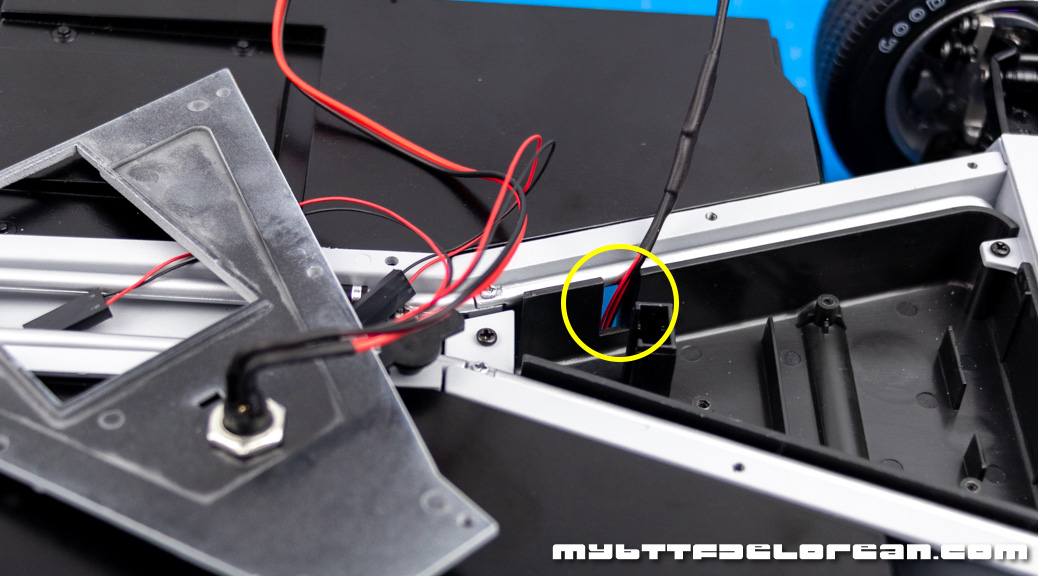 Continue to feed the plugs and cable through the notch until you can fit the Fuel Tank Cover back into place: 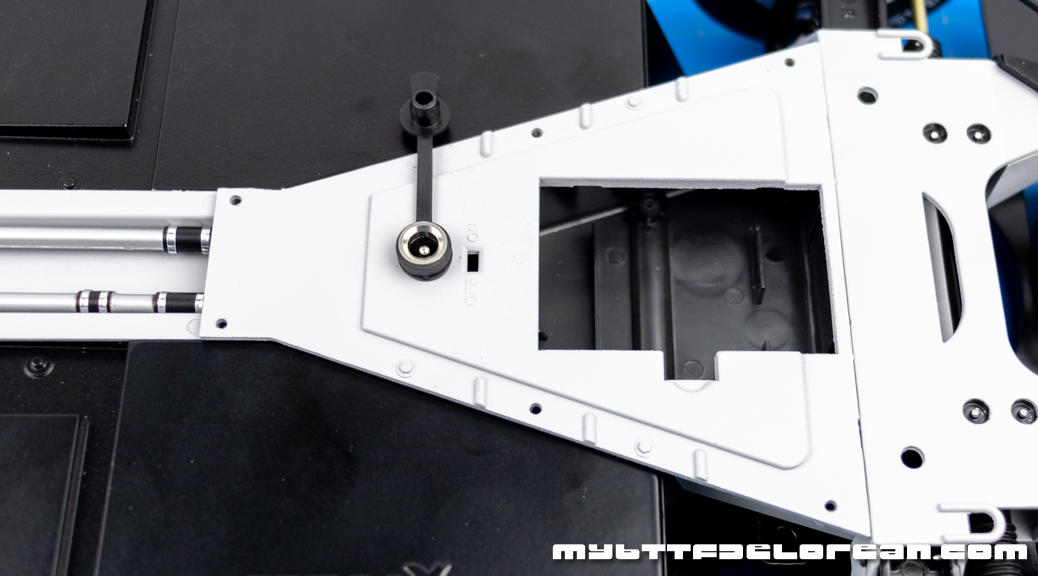 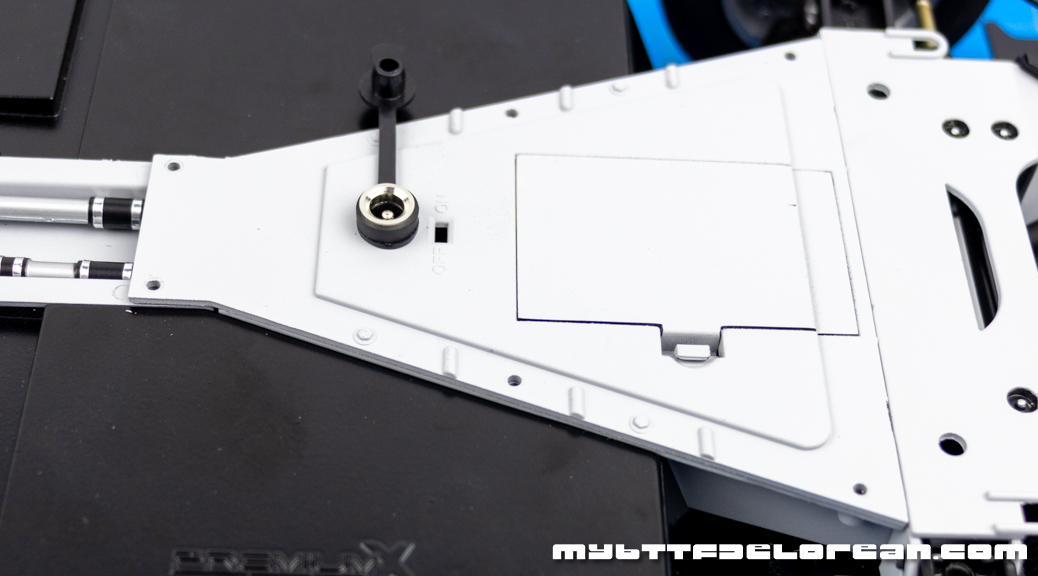 To finish up the bottom of the car, re-install all six (6) screws we removed in Step 1. Remember, the two longer LM screws fit towards the rear of the car, while the shorter BM screws fit the four holes to the front. Once completed, you can also close up the socket’s dust cover: 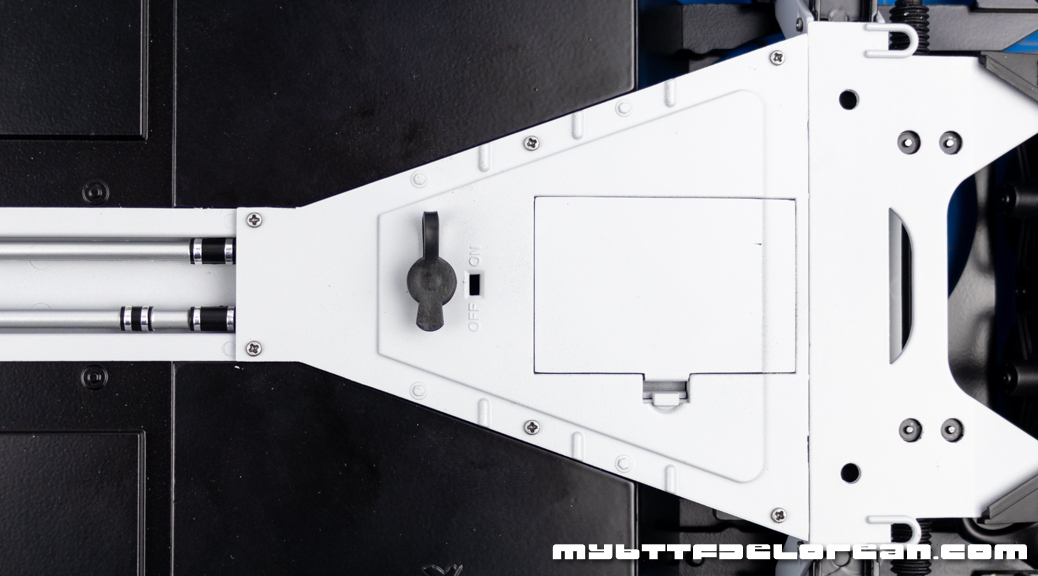 The final step is turn the car over and route the power cable along the path of the original, securing it with the removed Tabs and KM screws. Notice that you now have two power connectors at the front of the car and three at the rear. 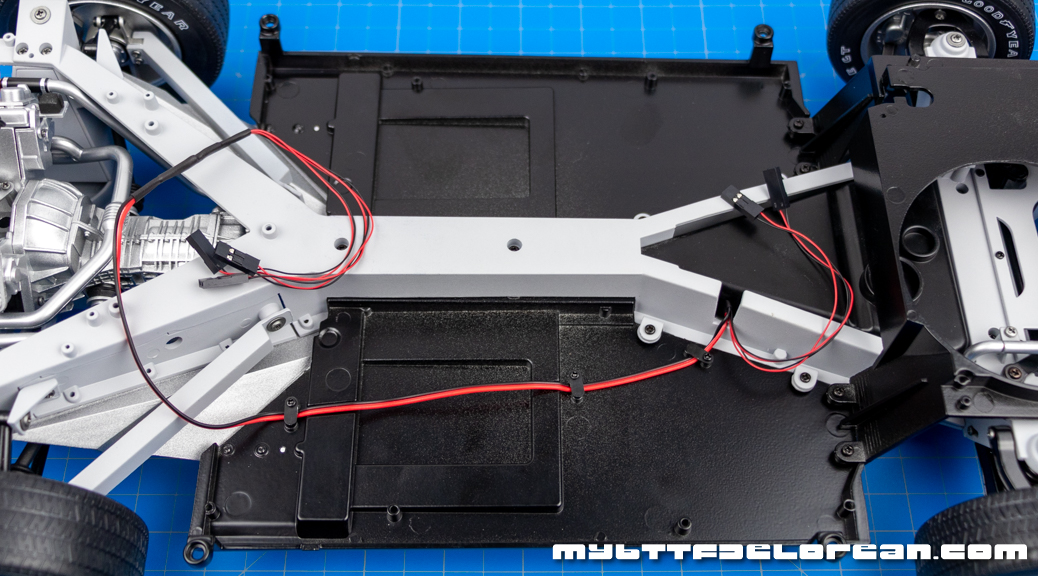 That’s it! The Power Mod is now installed and ready for use.

As a test, I connected the AC/DC adapter to my wall outlet, attached the 3m extension cable, and then plugged it into the socket under the car. Then, I checked for power at the end of each of the plugs with a multimeter. All of them showed the correct 5V, so I am ready to move on with my build and not concern myself with any lack of power in the future!

For any builders with a plan to install future modifications, or any that don’t want to keep lifting the heavy completed car to access the batteries, this is a almost a requirement. And, since the Eaglemoss circuit board constantly drains on any installed batteries, replacing them would become a chore. Thankfully, The Power Mod from Model Modz solves all of these problems.

The five power plugs can be utilized for a variety of power consumers, from custom Flux Capacitors/XMAS Trees to EL rope and dashboard lighting or sounds. The AC/DC adapter even comes with plenty of cable length to allow the car to be displayed nearly anywhere (including inside a case). The optional inline switch then makes it easier to leave the wall adapter plugged in and only power the car when desired.

Overall, I am thoroughly satisfied with The Power Mod, both in quality and ease of installation. Thank you Corrie and Chloe!

11 thoughts on “THE POWER MOD”