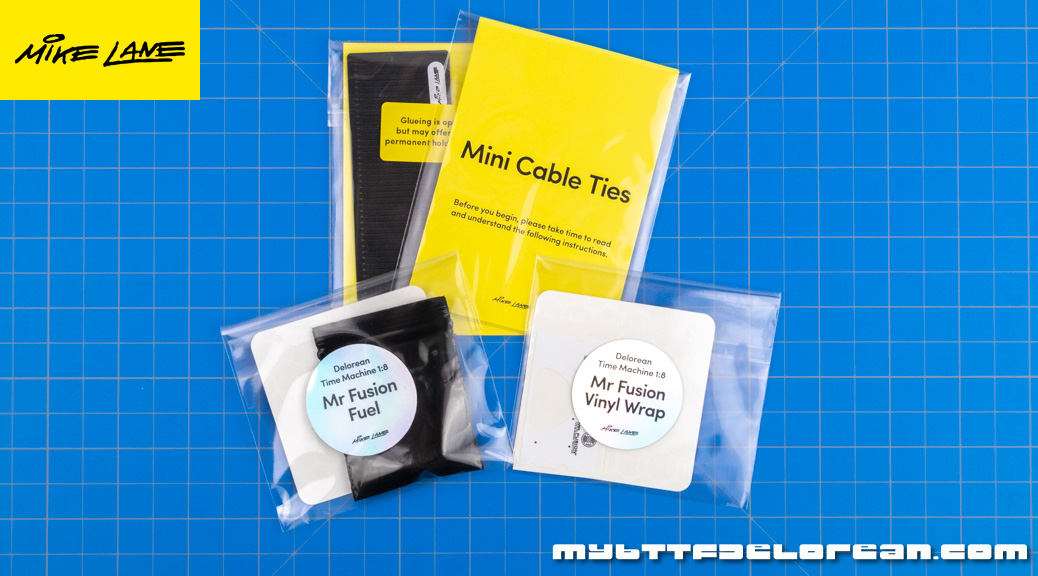 Just when you think Mike Lane has done it all, he creates even more! This time around, he has added a few new items for the Mr. Fusion reactor on the Eaglemoss 1:8 scale Back to the Future DeLorean

partwork model. I quickly ordered two of these new products and will happily add them to my build. I also picked up a set of his Mini Cable Ties in black for some of the interior wiring, but this post is for the Mr. Fusion mods.

As most builders know, the completed Mr. Fusion has three ugly screw holes on the passenger side. Mike has created this vinyl wraparound sticker to cover up these holes and fix the incorrect graphics Eaglemoss used. Additionally, Mike has also created a Mr. Fusion Transfers kit containing just the graphics in dry transfer format. This is for those builders who want to actually fill, sand, *and* repaint the entire Mr. Fusion. I didn’t want to go this far so I did not order this, but it is there for those who do: This product is more of a novelty display item instead of a correction to the model. It consists of the 1:8 scale Miller Lite beer can and a couple of old banana peels as seen at the end of the first film to power Mr. Fusion. Mike also includes a plastic disc that is mounted under the reactor bodywork to keep them from disappearing. These will add a very nice touch to the completed model. If you are interested in any of these mods, click on over to Mike Lane Mods and pick them up before they disappear!

Check out my updated Issue 04 for my own installation details and more pictures. This is the end result compared to the original: