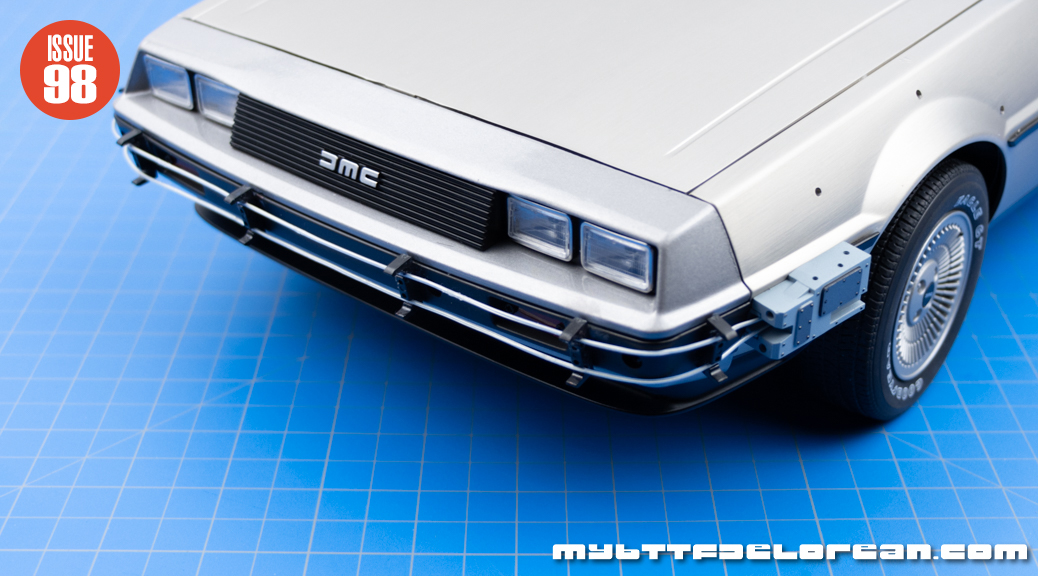 “Install the first of the clear filaments that will bring the power coils of your DeLorean to life!”

NOTE: I am installing the EL Light Mod from Model Modz as I build my model. There are some changes that need to be made during this issue to include this mod. I will note them where needed. If you are not using this EL mod, you likely can ignore these notes.

Materials: All of the parts in this issue are plastic, although I think the Filaments are some kind of soft, yet solid PVC tube. 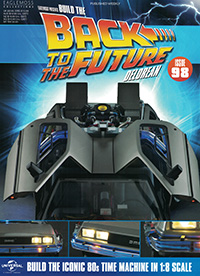 At the front left of the car, remove and discard the Adhesive Sticker holding the LED in place.

EL Light Mod change: This photo is from Issue 91 as I do not have these LEDs installed. However, this is the tape you would remove to access the LED: 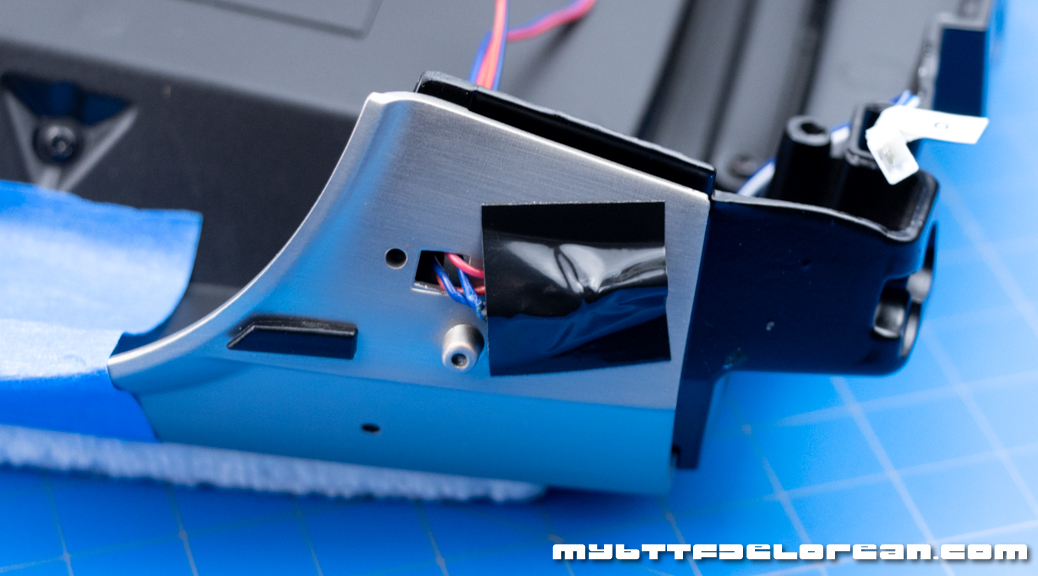 Place a piece of Adhesive Tape behind the LED and one end of each Filament. The Filaments should touch against the ‘head’ of the LED, as shown: 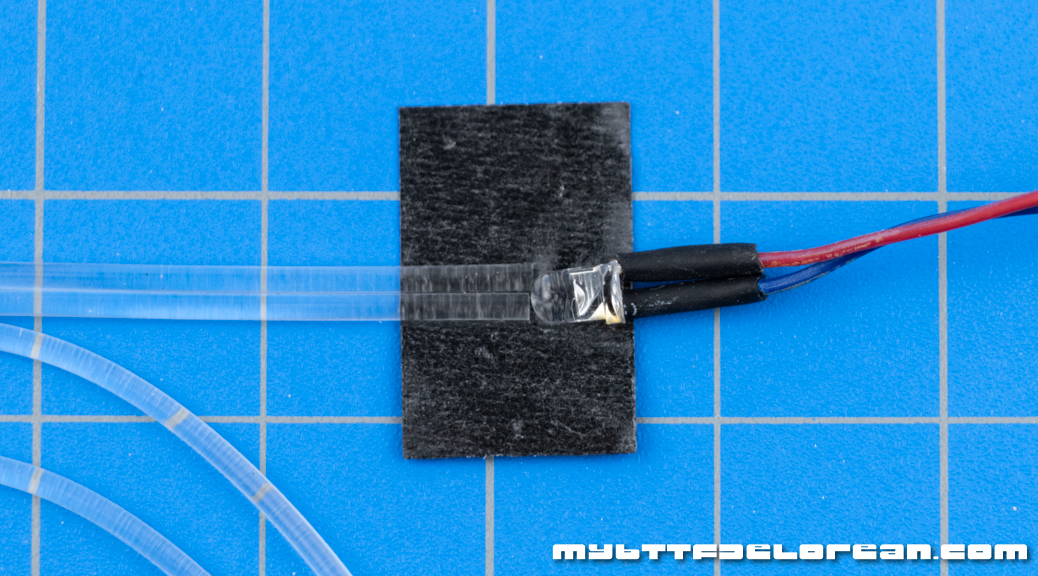 I knew in advance that this is how the Filaments were held in place, but I was not convinced it was very good. It would just be so easy for the Filaments to become dislodged or pulled away from the LED during installation, which could dim them. While I am not going to use the LEDs, I did buy these 3d-printed 1:8 BTTF DeLorean Fiber Cylinders from Shapeways a while ago to help align everything. They were designed by 3Dynamics (Adrian) and come in a set of eight: 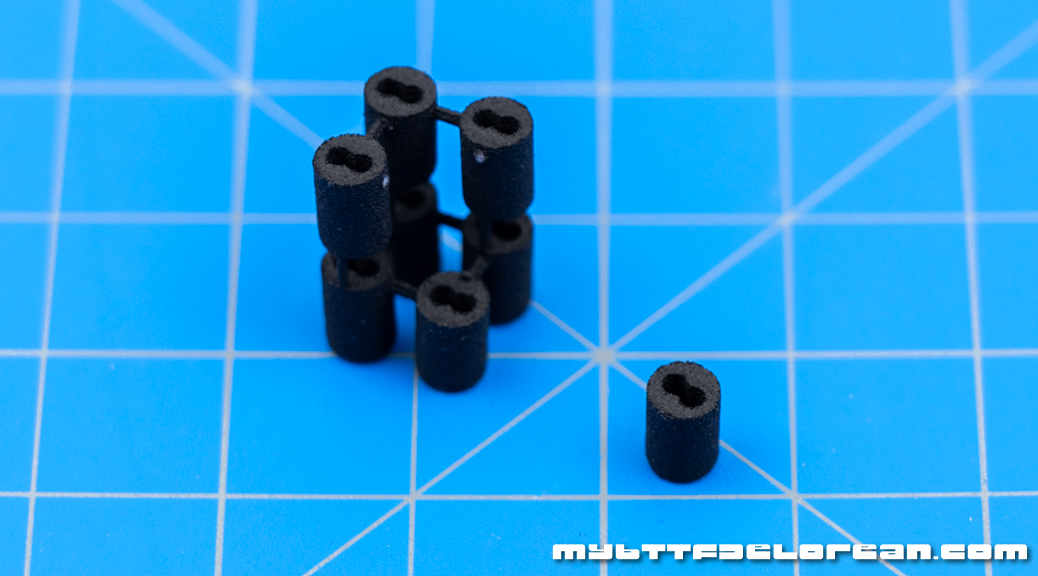 These cylinders hold the LED in place and have two holes for the Filaments to keep everything neat and aligned. Very nice if you are using the LEDs: 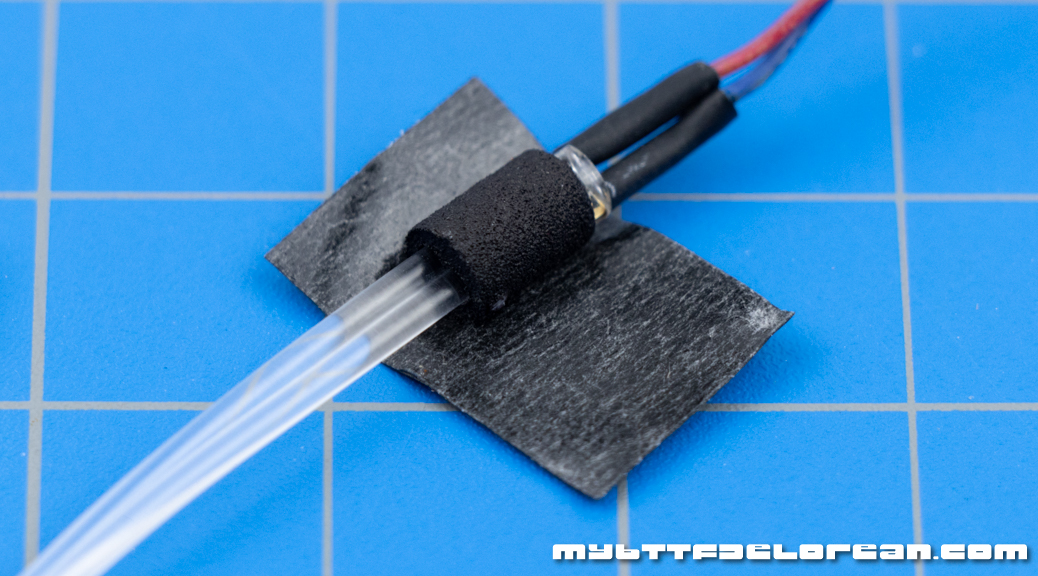 Wrap the Adhesive Tape tightly around the LED and Filaments to hold them together: 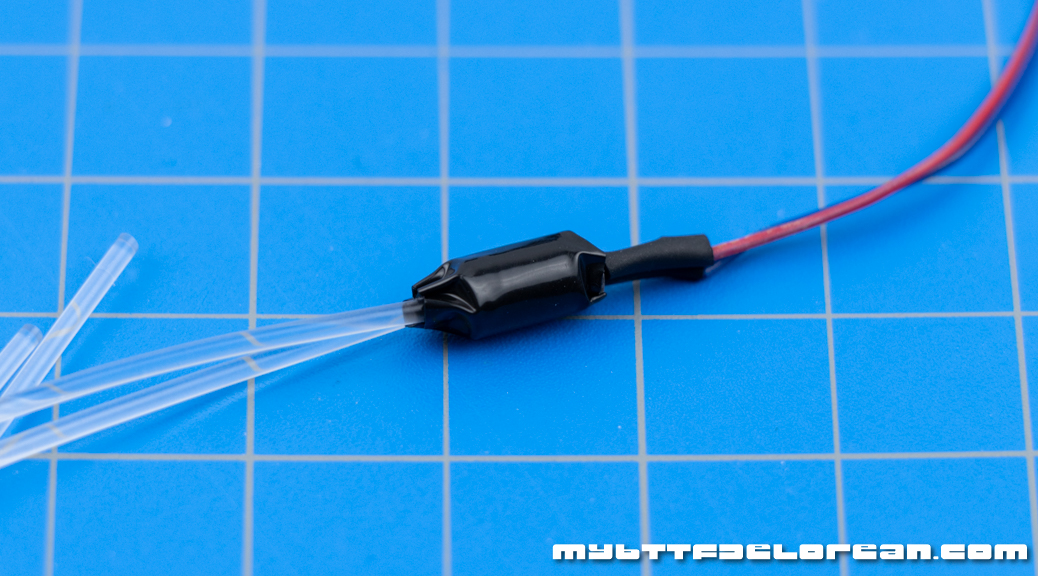 Place this taped section into the Junction Box (98B marked ‘L’) as shown, making sure you do not twist any wires or filaments: 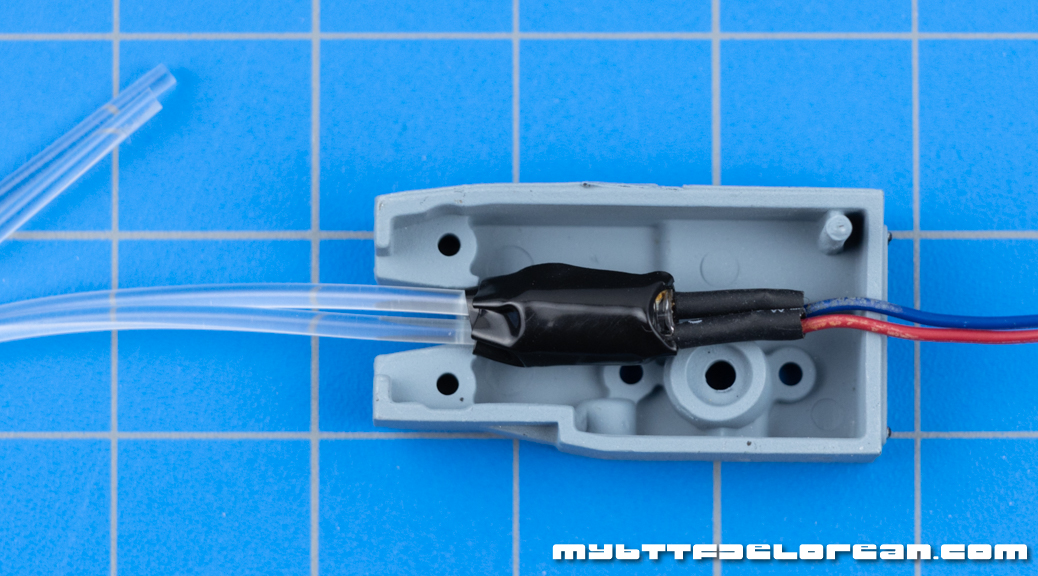 Fit the Divider (L) into the filament end of the Junction Box and secure with two (2) IP screws.

The two Dividers are marked L and R, make sure you use the correct one. 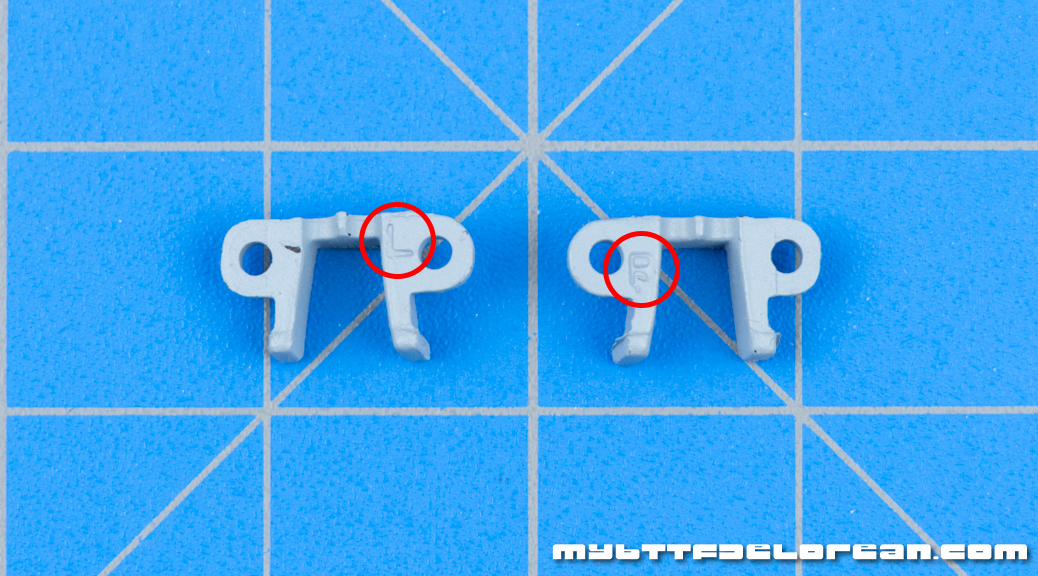 These Dividers hold the Filaments in place: 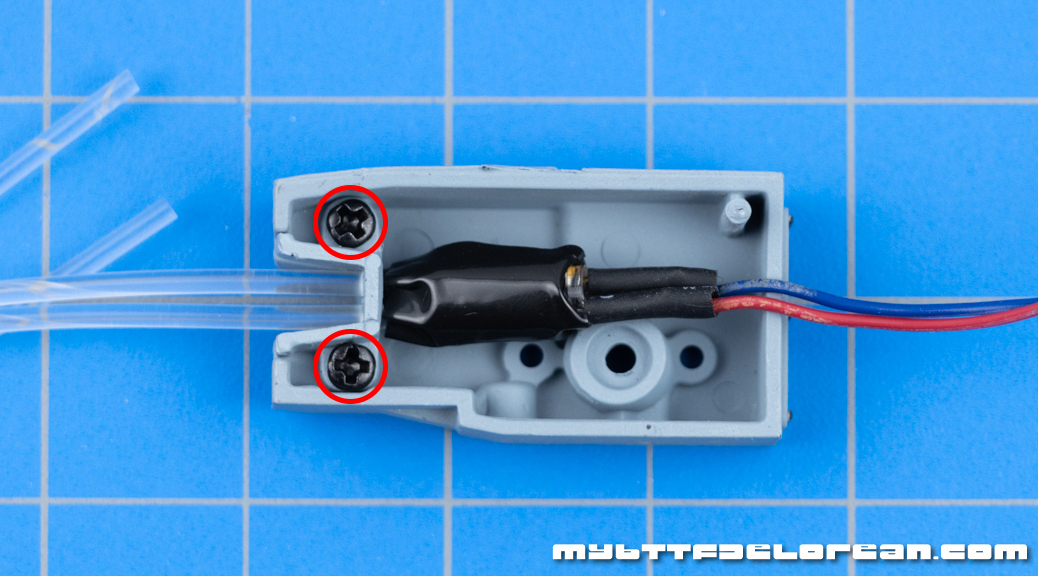 EL Light Mod change: Instead of using the LED/filaments, we want to loop the halfway point of the front EL wire (with the blue heat-shrink) through this Junction Box and secure it down with the Divider: 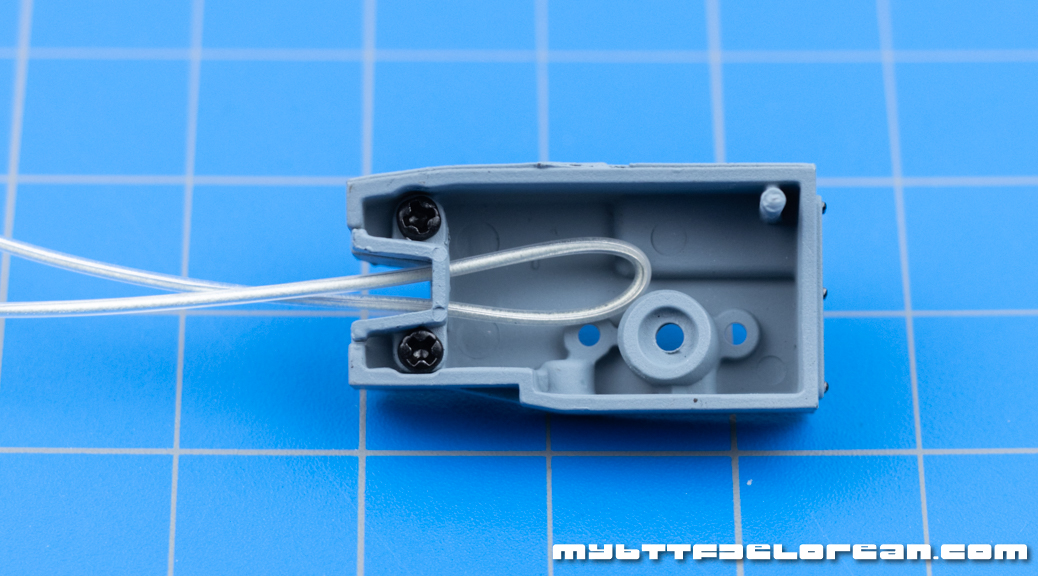 Fit the Junction Box into place on the body as shown, ensuring you do not twist anything, and secure it to the body with one (1) KM screw. At the same time, gently feed the two filaments into the matching notches of the closest Power Coil Bracket (95A), as shown.

There is an alignment peg and post that will align this Junction Box to the body correctly. This is also your friendly reminder to try using 3-in-One Oil on all screws going into metal: 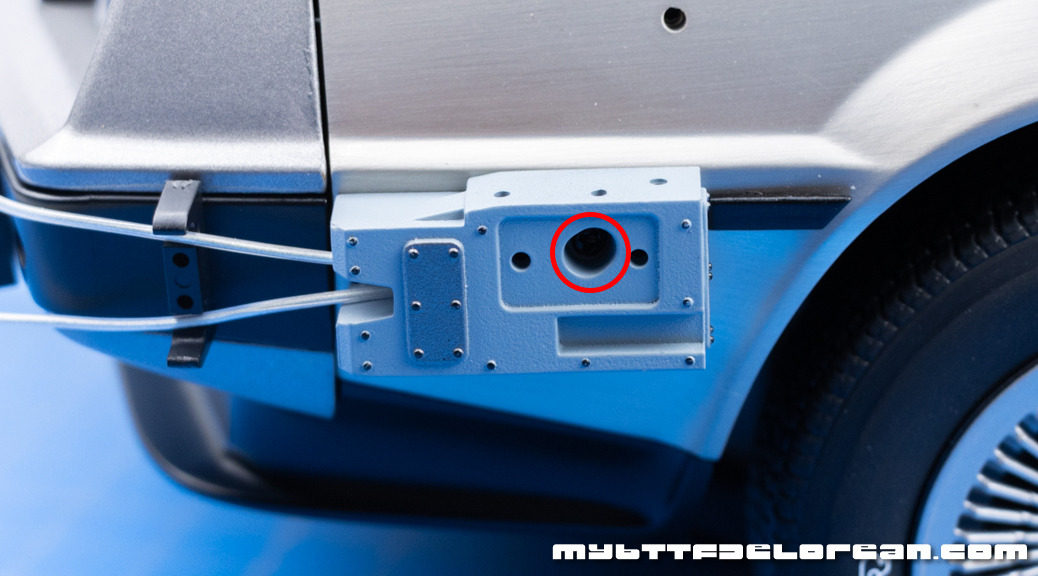 Push one of the Plates over the screw hole of the Junction Box, aligning the two pins.

This is friction-fit and did not require any glue/screws. Still, you may want to leave this off until you are completely done with the issue just in case you need to remove the Junction Box again to adjust your wires: 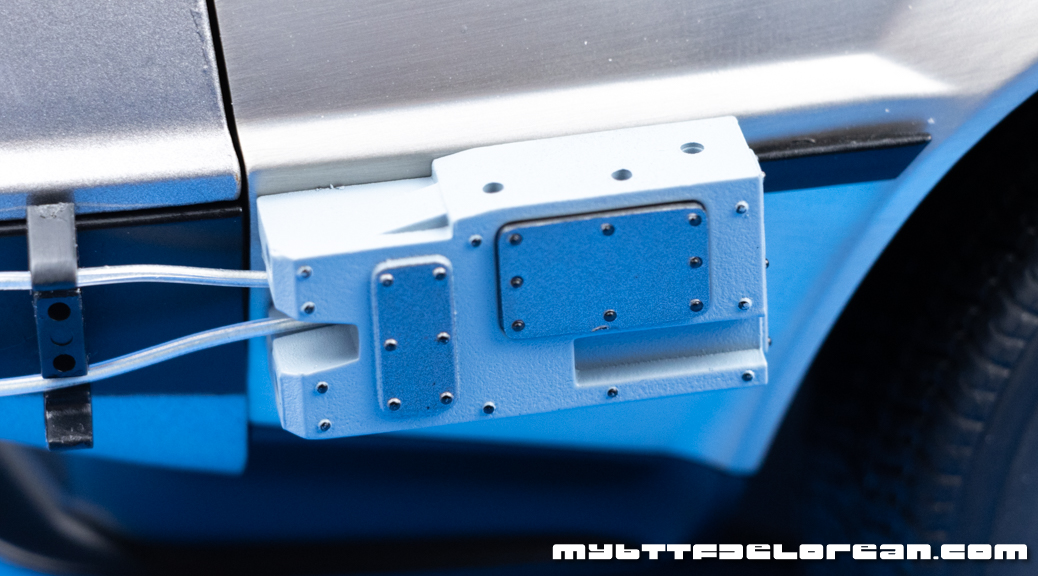 Gently guide the two Filaments/EL wire into the matching notches of the Power Coil Brackets along the front of the car: 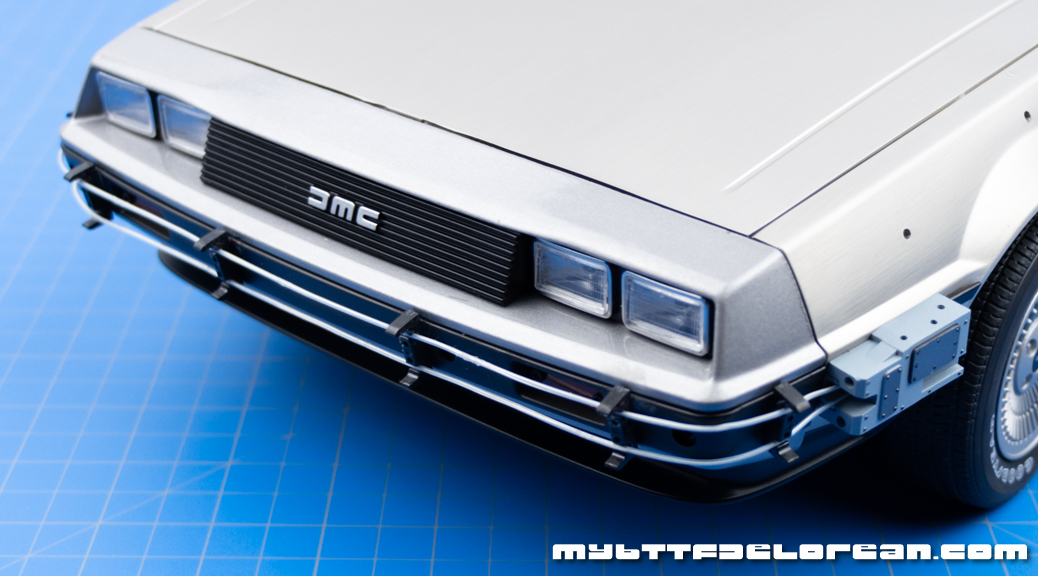 In the same way, repeat the previous steps on the right side of the car to:

EL Light Mod change: Instead of using the LED/filaments, we want to fit the capped end of the front EL wire, as well as the blue heat-shrink joint, inside this Junction Box and secure it down with the Divider: 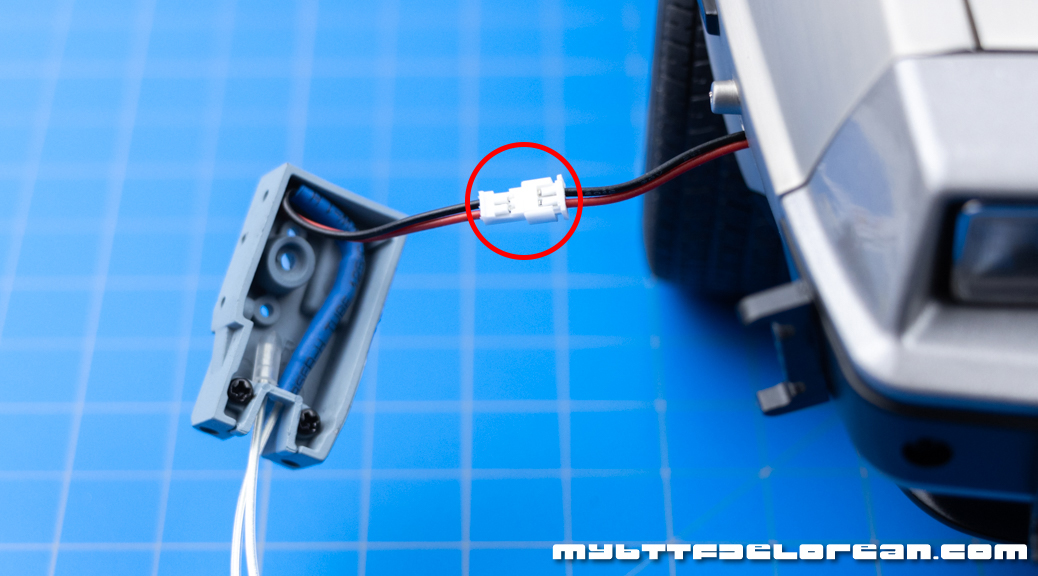 Push the Junction Box into place on the body as shown, ensuring you do not twist anything and secure this to the body with one (1) KM screw: 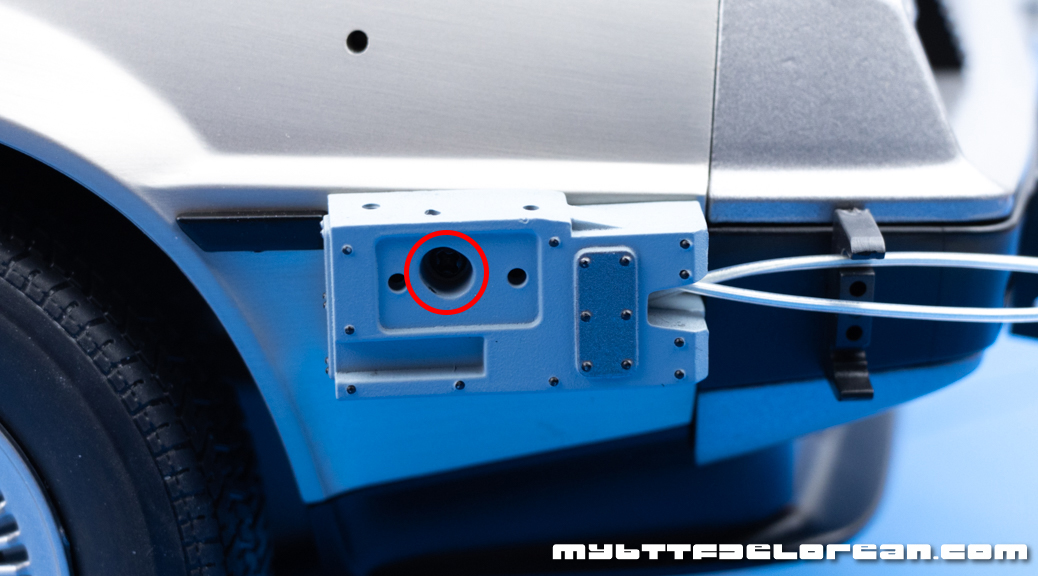 Gently guide the two filaments into the matching notches of the last Power Coil Bracket and push the remaining Plates over the screw hole of the Junction Box, aligning the two pins: 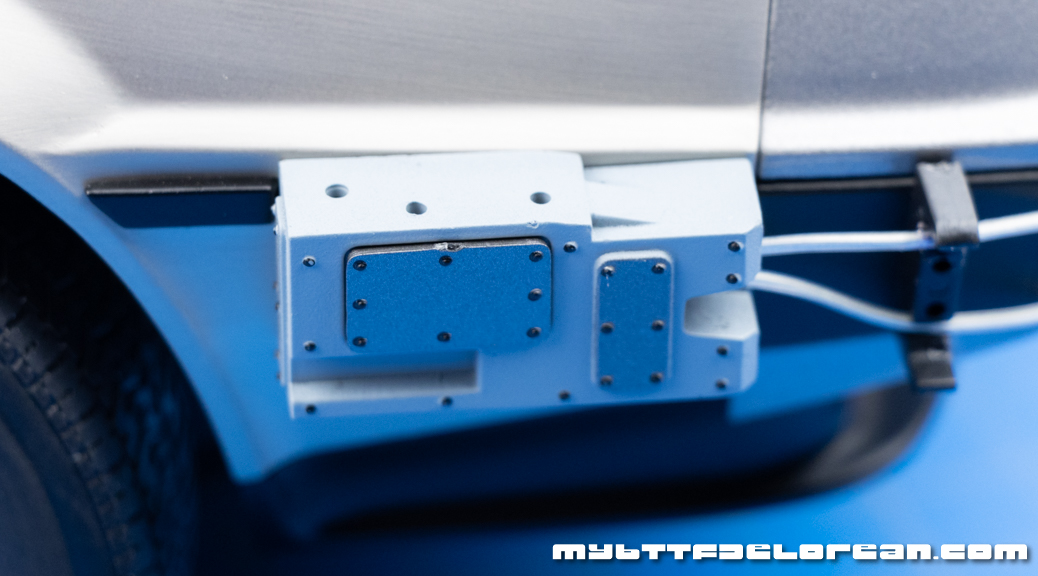 Although that is the end of this issue, I kept working on this lighting to get it just right. I wanted my wires to be straight and shaped nicely, so I went back through the issue and removed/reinstalled parts as needed to get the look I wanted. Even though the following pictures depict the EL wire, the stock Filaments likely could likely benefit from this too. The first thing I noticed is that I was going to have to secure the Filaments/EL wire to each Power Coil Bracket to get the look I wanted. Therefore, I tried a variety of rubber cement and super glues: 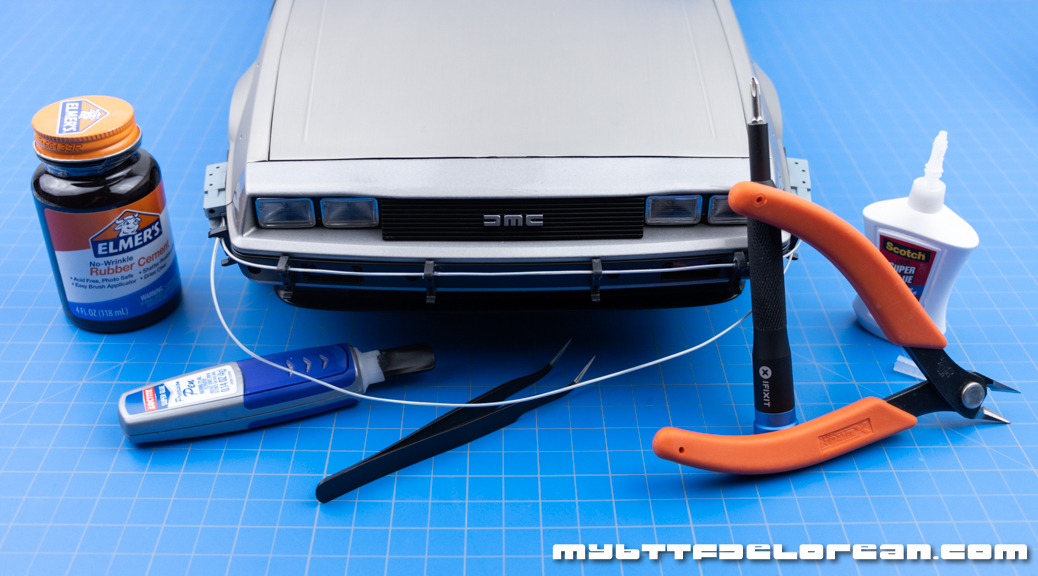 Of all the adhesives, regular liquid super glue seemed good but it still does not hold it that well. I needed to be delicate and let the glue fully dry or else the Filaments/EL wire kept popping loose. In the end, I found that just using painter’s tape (or other removable tape) to hold it all in place while you work seemed to work best: 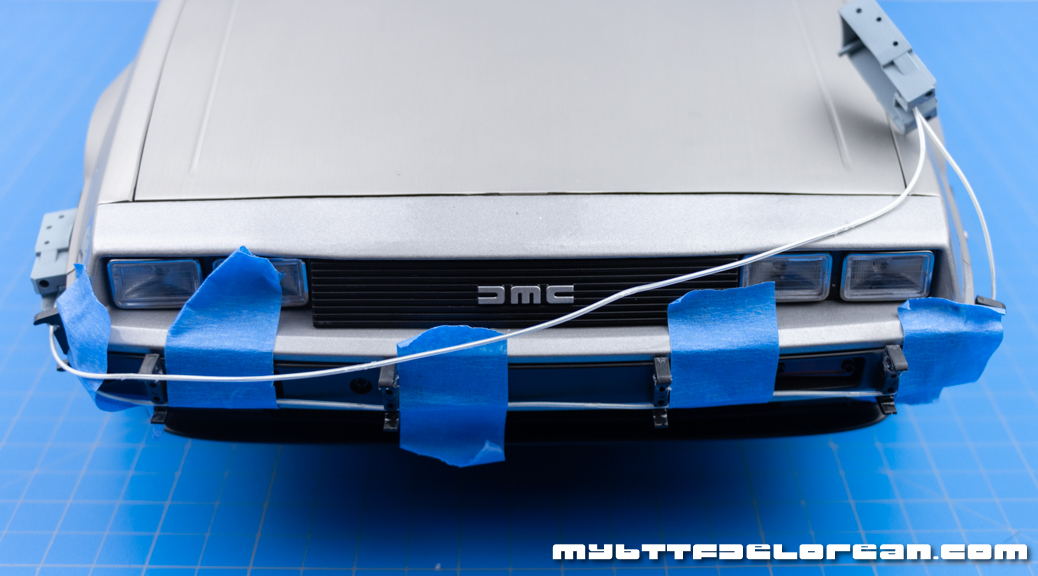 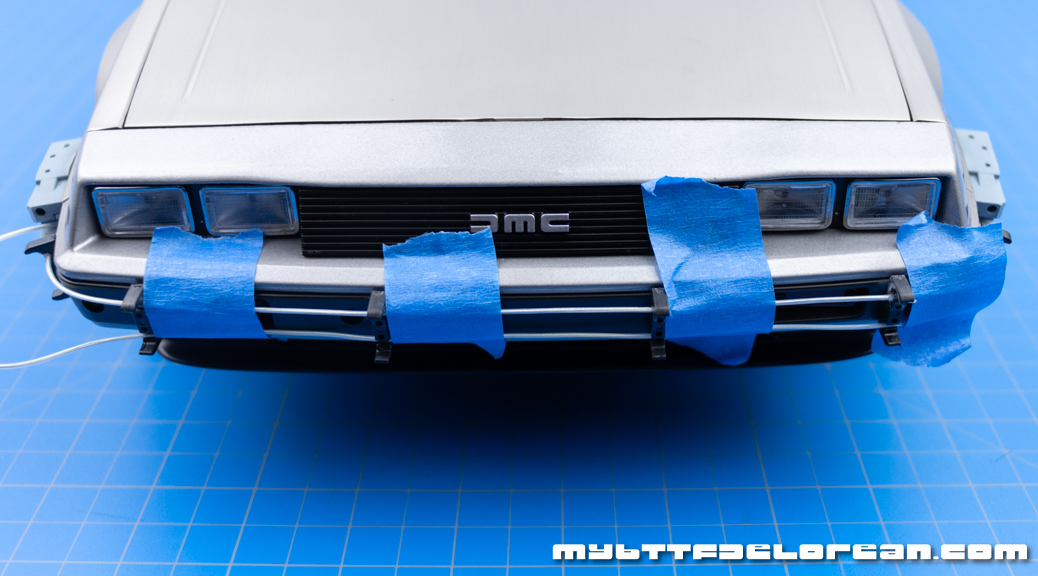 After getting the wires the way I wanted, I ended up with a little extra EL wire: 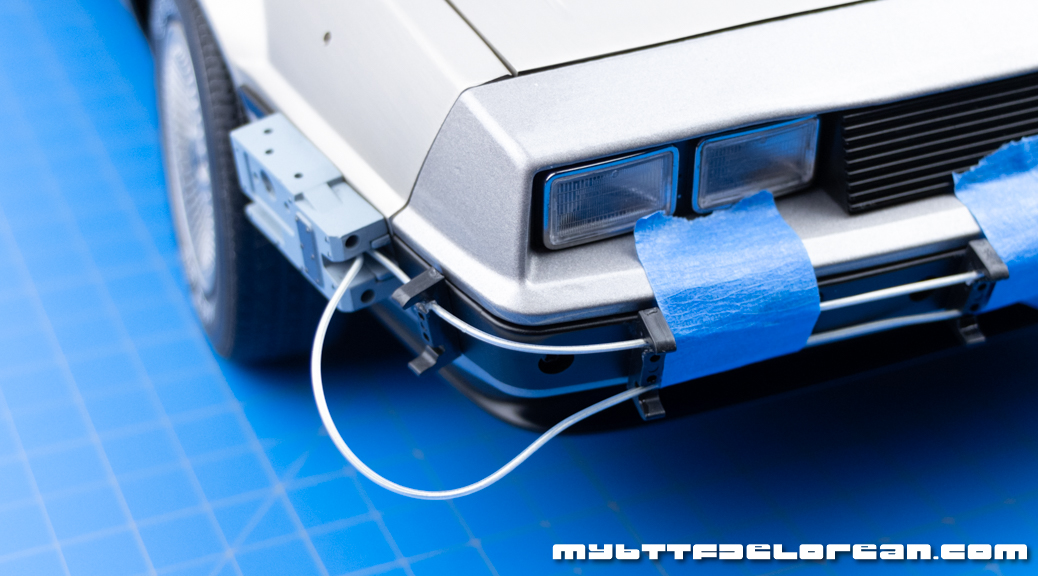 This was fixed by removing the right side Junction Box, sliding off the little protective end cap, snipping the EL wire to the length I needed, and replacing the end cap. You can cut EL wire to any length you desire and it will still work. Just make sure to replace the cap as exposed EL wire can shock you.

If you are using the stock Filaments, they can also be cut to length as needed. 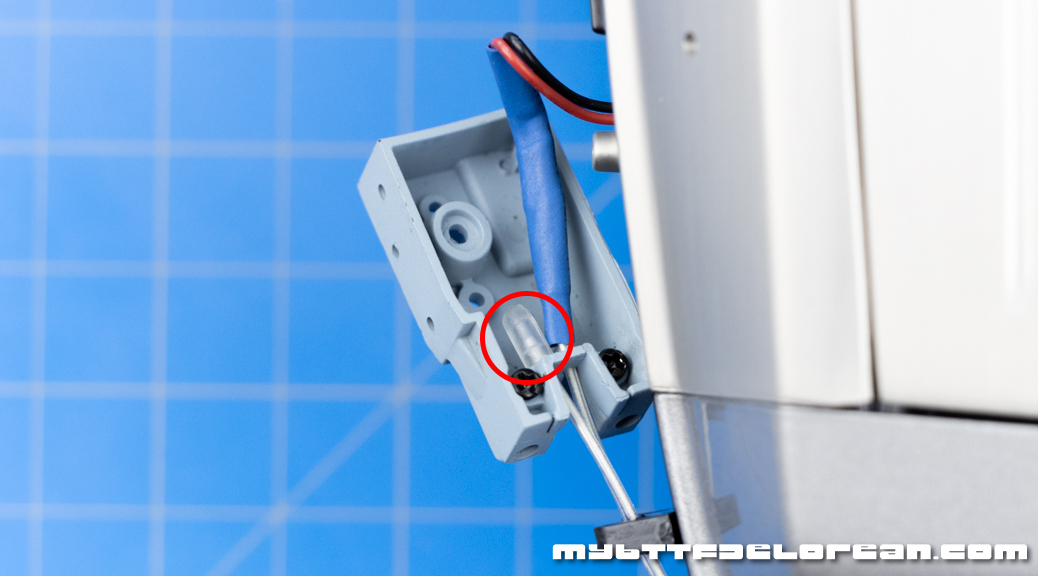 The Junction Box was then reattached to the car: 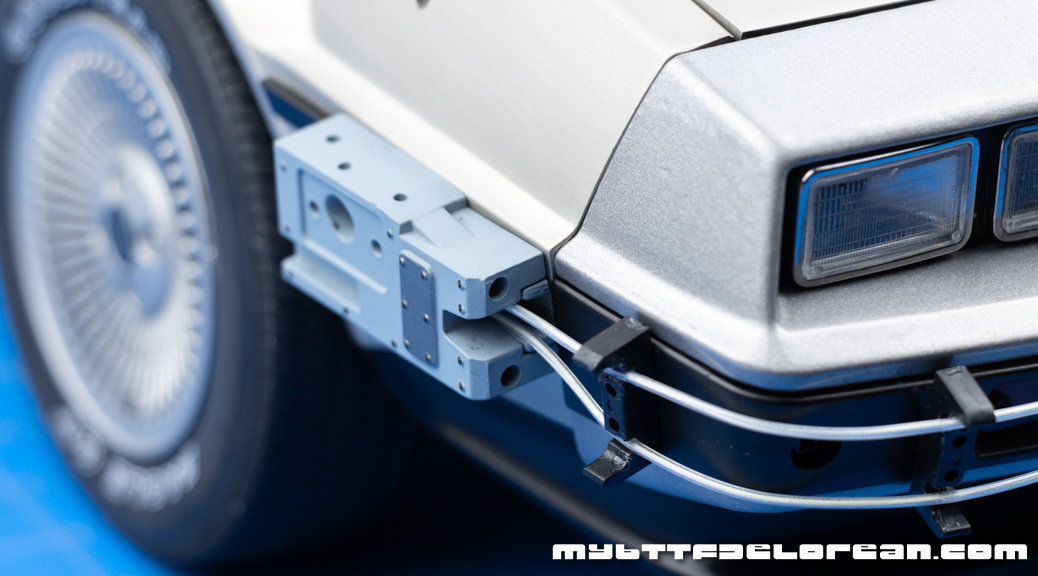 All in all, I took about an hour to get the front flux lighting to look like this. I feel it was well worth it. This was the front view before I trimmed down the EL wire and put it back in the Junction Box. This is as straight as I could manage: 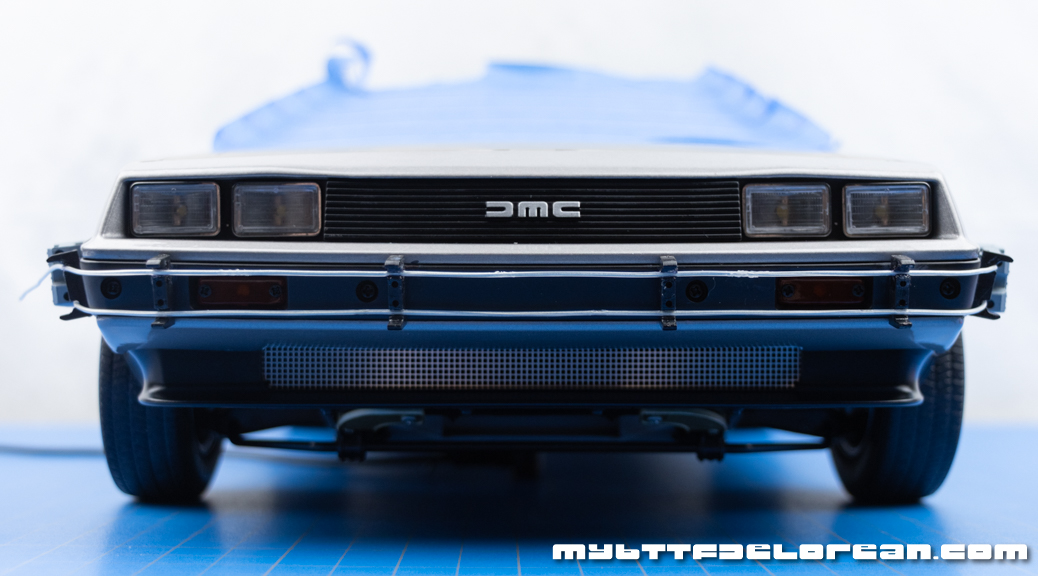 Finally, just for fun, I powered up the car and pressed Button 1. The EL wire immediately came to life and I think it looks fantastic! 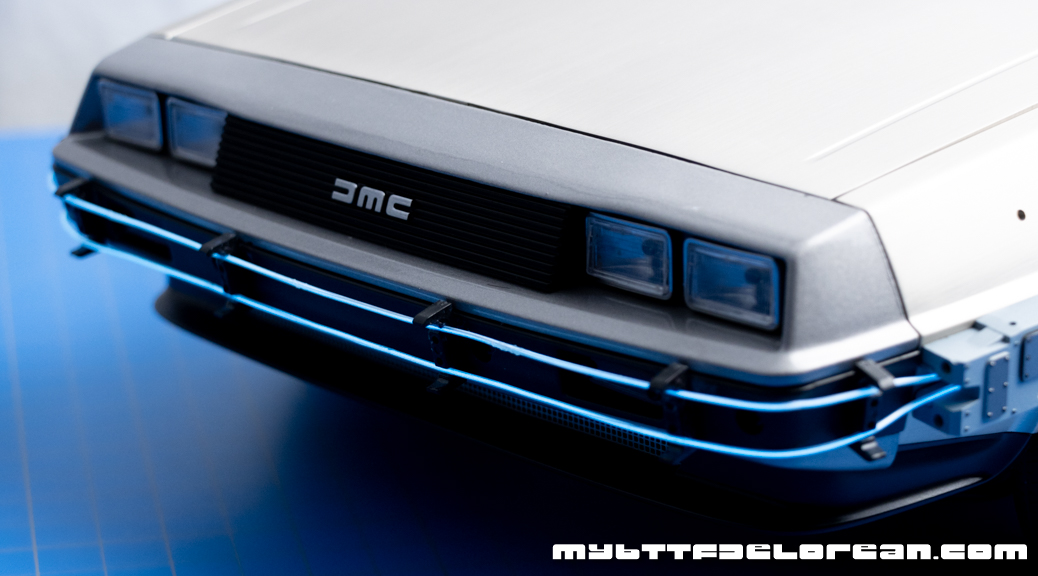 I apologize if this issue was a bit hard to follow. It is tricky to describe the build for both sets of builders: those installing the EL Light Mod and those who are not. Still, both end results give us our front Flux Band lighting and that is surely wonderful!