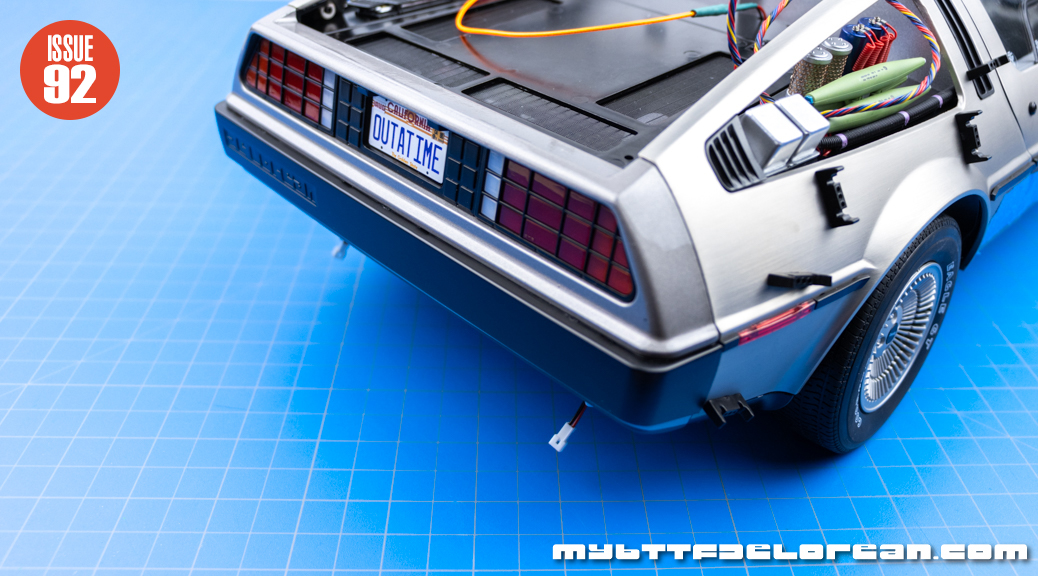 “Fit the LED board to the tail light assembly of your DeLorean, then fix the assembly in place.” Materials: The Tabs are the only non-electrical part in this issue and they are plastic. At the right rear of your DeLorean, connect the LED Wire (numbered 10) to the existing blue/green wiring plug, as shown:

This will be the engine bay light: The instructions are a bit weird here; they show this LED just kind of placed near the hole behind the Engine Lamp lens. There is a hole for the LED and it does fit into it so I carefully bent the LED’s pins 90 degrees and actually put it into the hole where it seems like it belongs anyway: When the car is powered, and Switch 6 is pressed on the center console box, this LED lights up: Retrieve the Rear Taillight assembly we completed way back in Issue 02. Carefully remove the plastic Rear Bumper by unclipping these eight catches.

Squeeze the catches towards the center of the bumper and this comes off easily: Fit the LED Boards into the Rear Taillight assembly as shown. Make sure the top row of LEDs are securely set into each matching hole.

The LEDs on my boards were at all sorts of odd angles and did not line up with the holes. I had to very carefully bend a few LEDs into the right position so these would fit correctly. Try hard not to damage the LEDs/circuit board! When the LED Boards are seated, they sit almost flush: Secure the wires of the LED Boards in place with the remaining three Tabs and three (3) KM screws, as shown. Use the two Adhesive Stickers to cover the circuit board backs on each side, as shown.

I feel that these are not meant to hold the LED Boards in place as much as prevent the circuit boards from shorting out on the body: Bring this Rear Taillight assembly to the rear of your DeLorean and connect the black/white wires (numbered 6) together, as shown: Connect the green/red wires (numbered 11) together, as shown: Carefully fit the Rear Taillight assembly to the back of your DeLorean as shown, making sure not to pinch or break any wiring.

You can tuck any excess wire/plugs inside the cavity behind the right rear quarter panel: Secure the Rear Taillight assembly to the car with three (3) DM screws, as shown: Clip the Rear Bumper back onto the Rear Taillight assembly: With that, the issue is complete. I powered up the car and checked that my lights are still working, they are! This issue was a sweet escape from the previous one, it was so peaceful and smooth! I really enjoy that we finally were able to install the rear bumper assembly we started off the entire build with. It is amazing how far we have come on this journey!