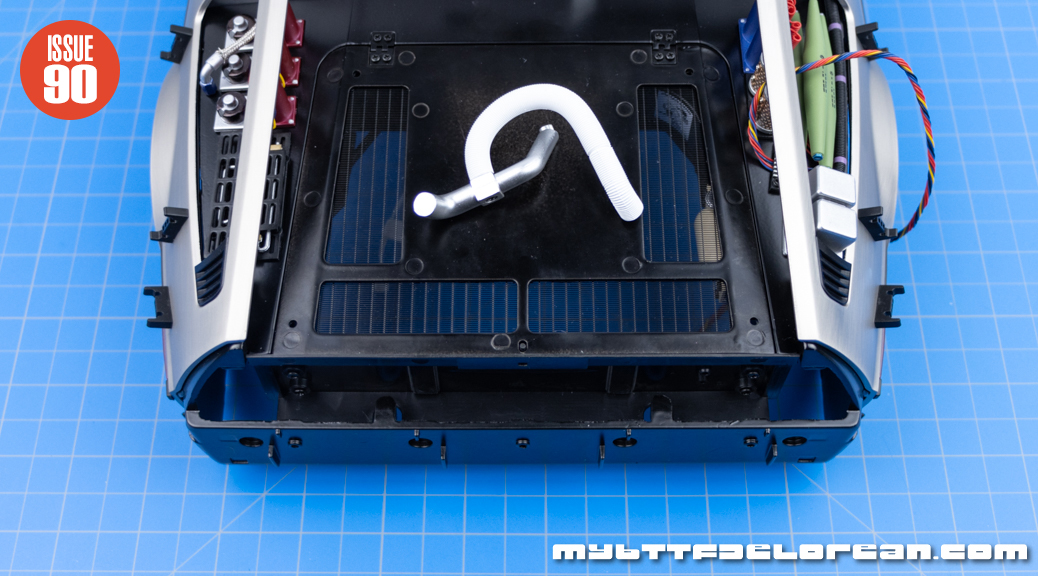 “… fit a spring catch and stay, then fit the engine cover to your DeLorean’s upper body assembly.” Materials: The Stay Part spring (90E) and loop (90B) are metal, but the rest of these parts are plastic. The pin without the spring on it goes down into the Engine Cover and the spring should be compressed in the slot, like this: Secure this assembly in place by fitting the Spring Catch Part (90F – cover) over it and using two (2) QM screws.

Make sure this catch cover is orientated with the tab facing the center of the Engine Cover, as shown. This is also your friendly reminder to try using 3-in-One Oil on all screws going into metal: On the other side of the Engine Cover, ensure the pin of Spring Catch Part (90D) is poking through the slot and you can slide it back against the spring.

This pin is what we will use to unlatch and open the Engine Cover once mounted to the body: Secure the Stay Part assembly to the Engine Bay Centre with two (2) AP screws, as shown: Fit the Engine Cover assembly into the engine bay opening as shown and secure the hinges into place with four (4) QM screws.

You should be able to latch the cover closed at this point: Turn the entire assembly over and fit the pin of the Stay Part (90A) into this matching hole of the underside of the Engine Cover and secure it into place with one (1) QM screw, as shown: NOTE: The Engine Cover can only be opened this far; do not force it farther up! The L-shaped slot in the Stay Part allows you to lock it open: Fit the tab of the white u-shaped Pipe (90H) into this recess of the short white Pipe (90G) and secure with one (1) AP screw: The main part of the body assembly is now finished, at least the insides of it. Prepare yourself for a BIG issue coming up next!