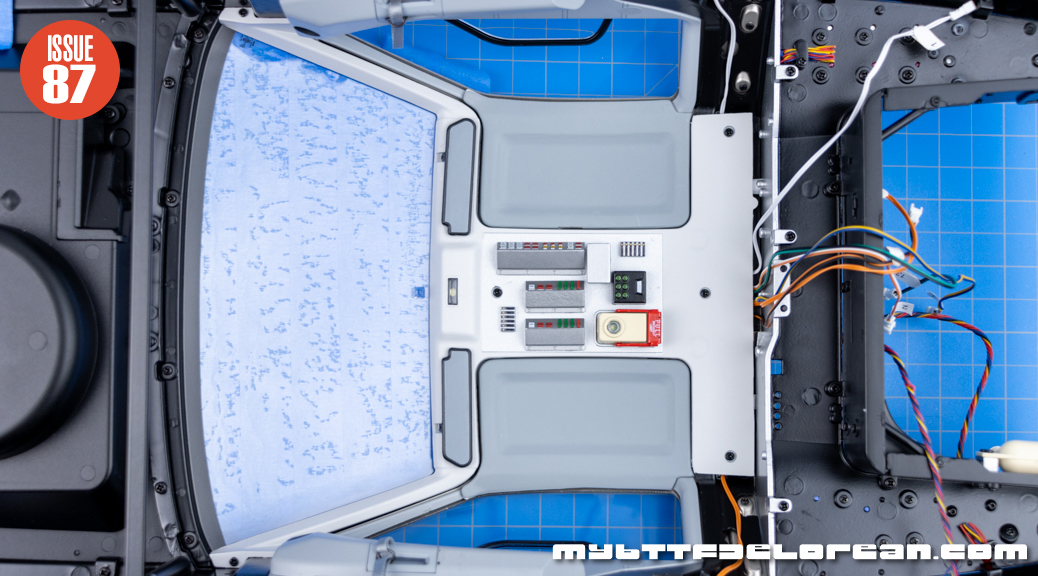 “… add more details and lights to the interior roof panel, and fix it into your DeLorean.”

There is so much to do in this issue that they eliminated the extra sections of the magazine! 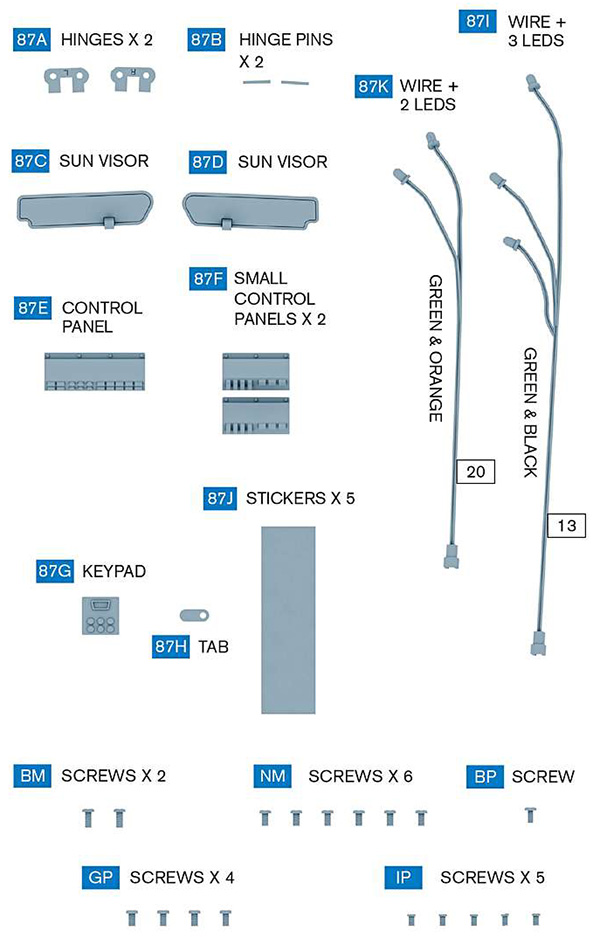 Materials: All of the non-electrical parts in this issue are plastic, but the Hinge Pins are metal. 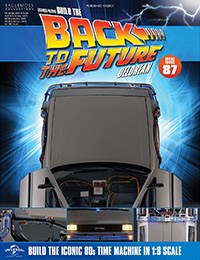 Retrieve the Roof Interior Panel assembly from the previous issue. Fit the Control Panel into place at this location: 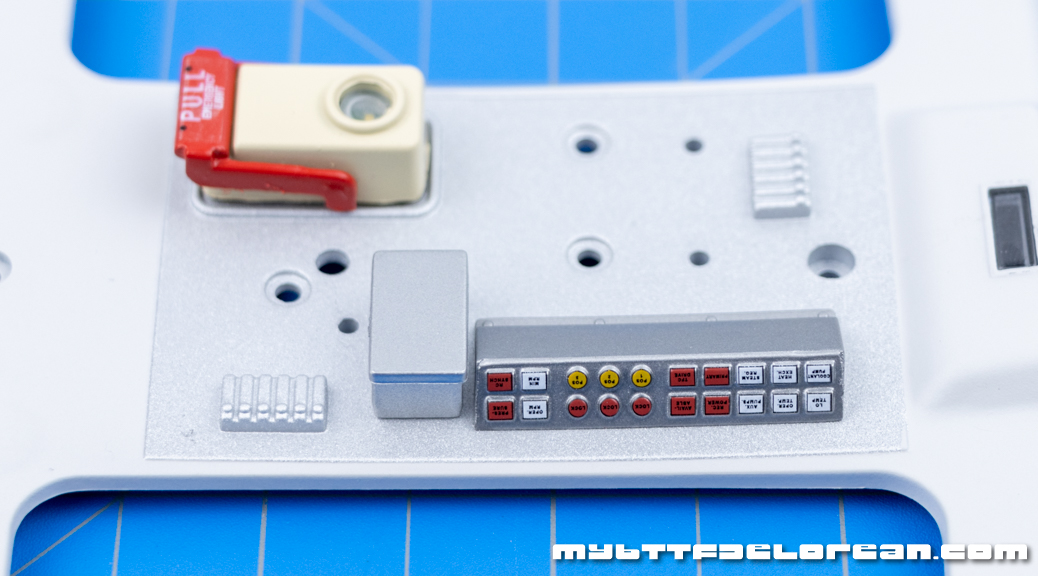 This panel is extremely detailed; you can even read the text on every button: 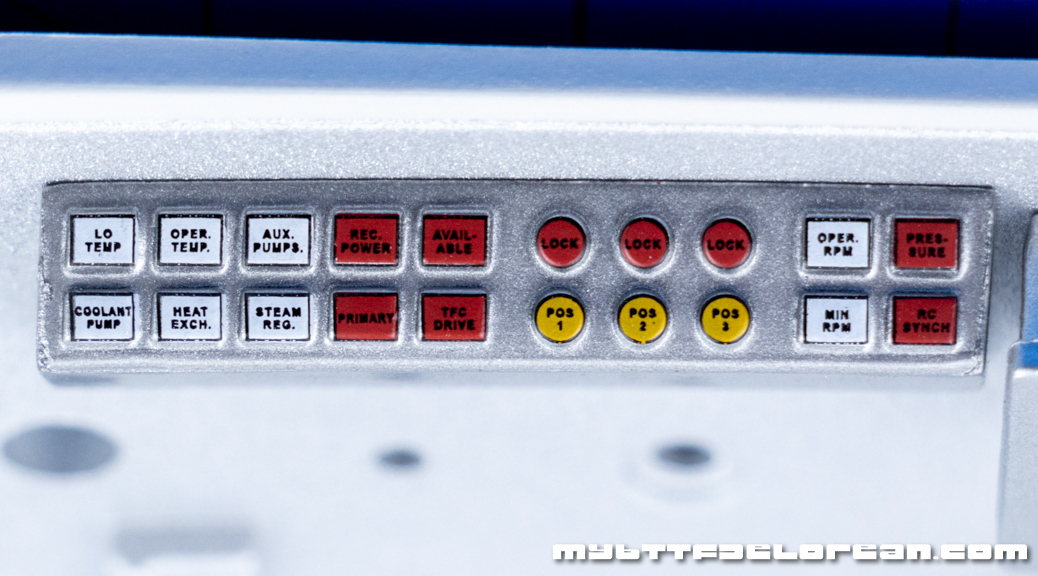 Secure the Control Panel from below with two (2) GP screws: 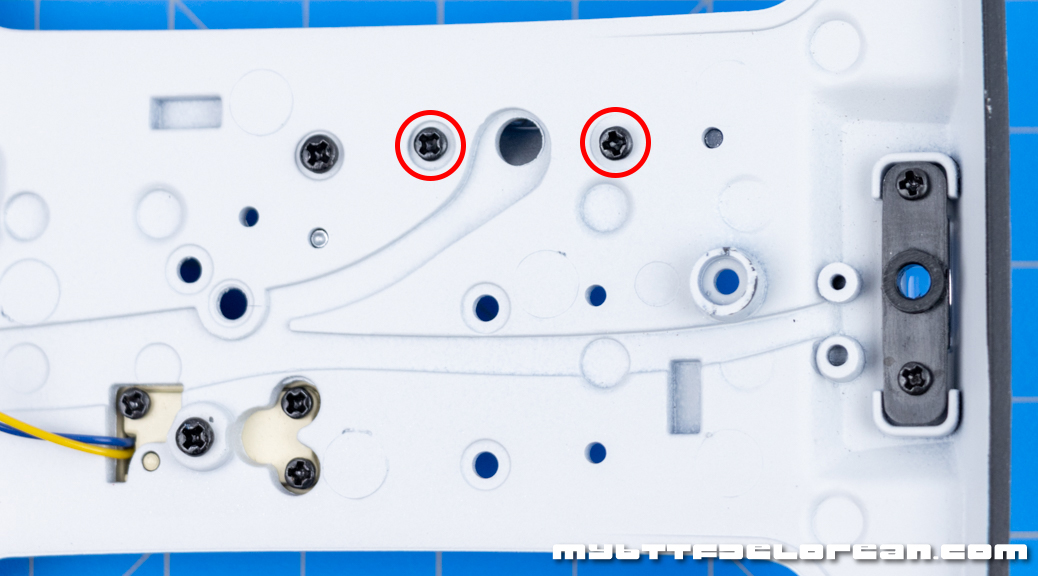 Fit the two Small Control Panels into place at these locations on the Roof Interior Panel: 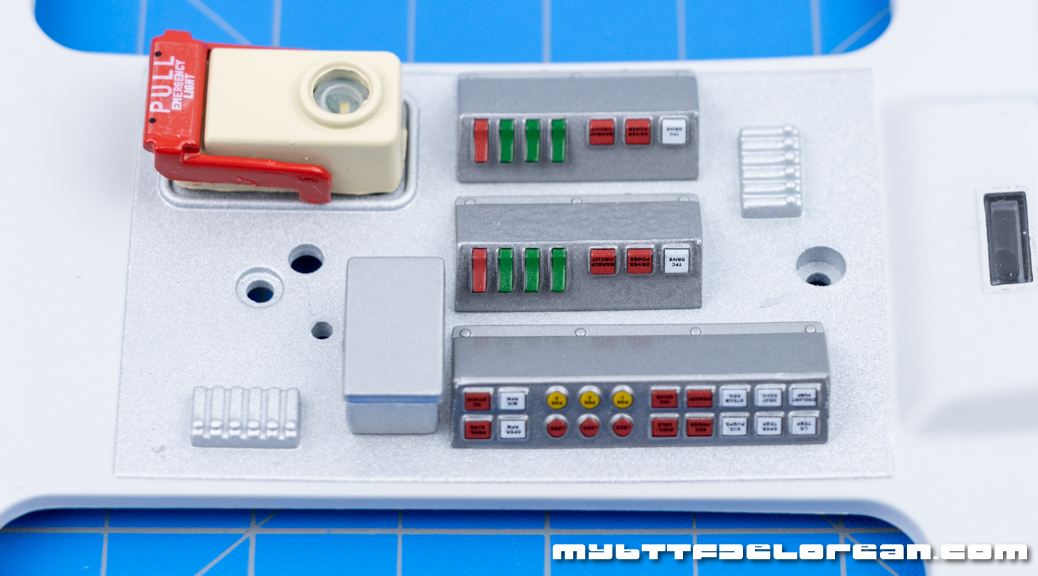 Secure the Small Control Panels from below with two (2) GP screws: 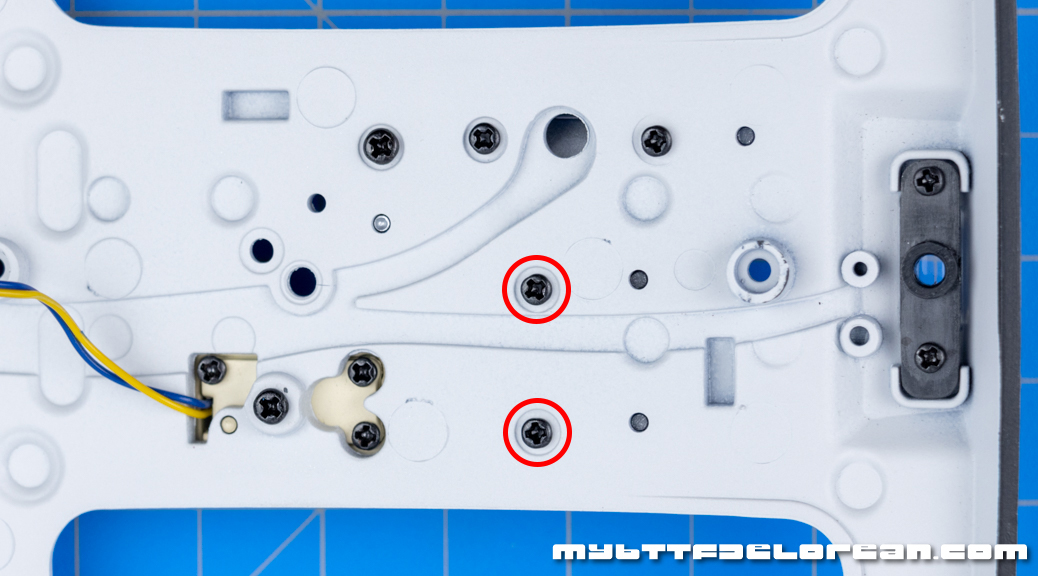 Fit the Keypad into place at this location on the Roof Interior Panel: 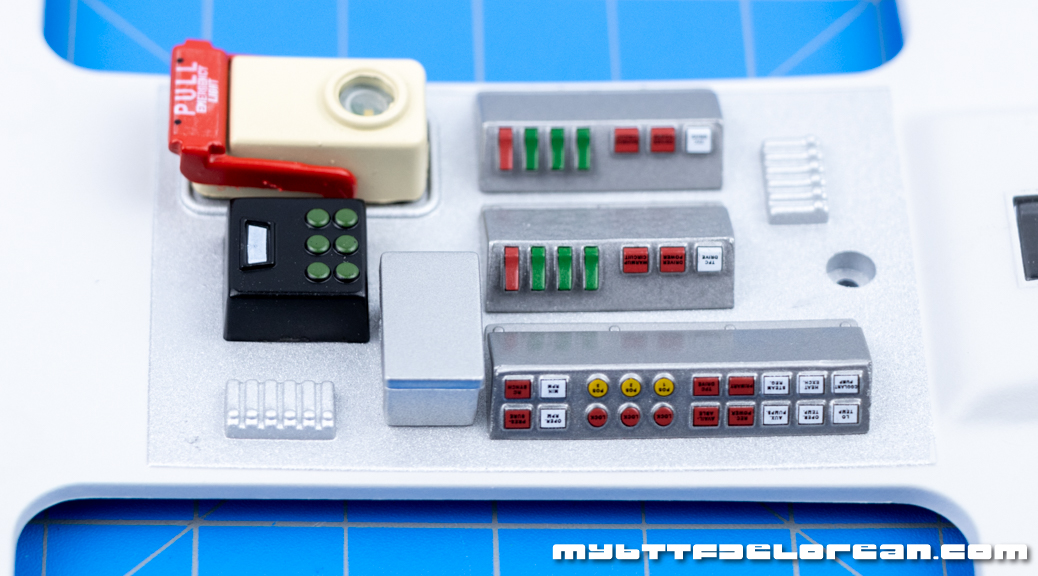 Secure the Keypad from below with one (1) BP screw: 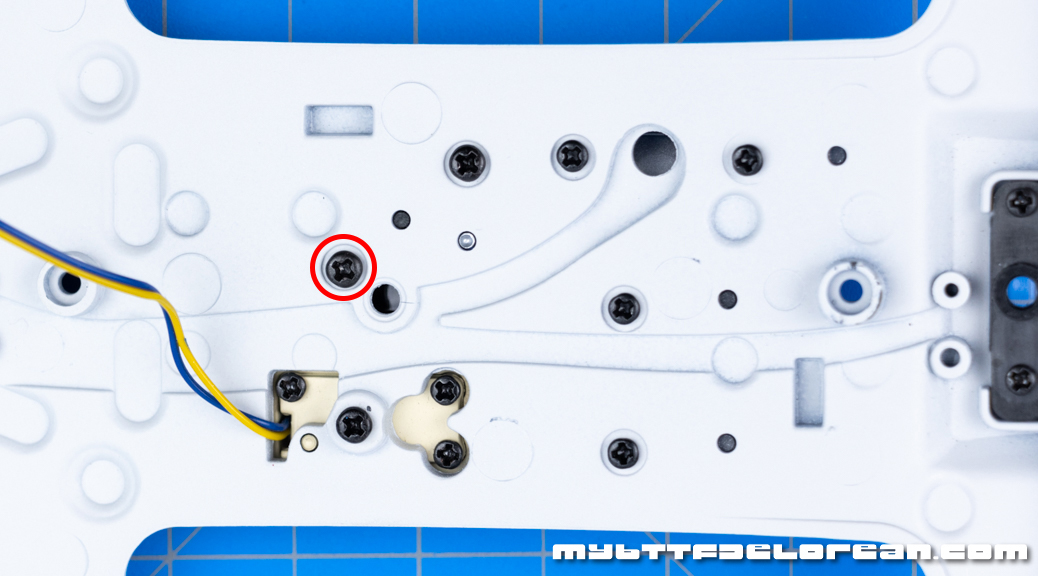 I wanted to add a little color to the junction blocks on this panel, so I took my Black Sharpie and my Metallic Gold Sharpie to them: 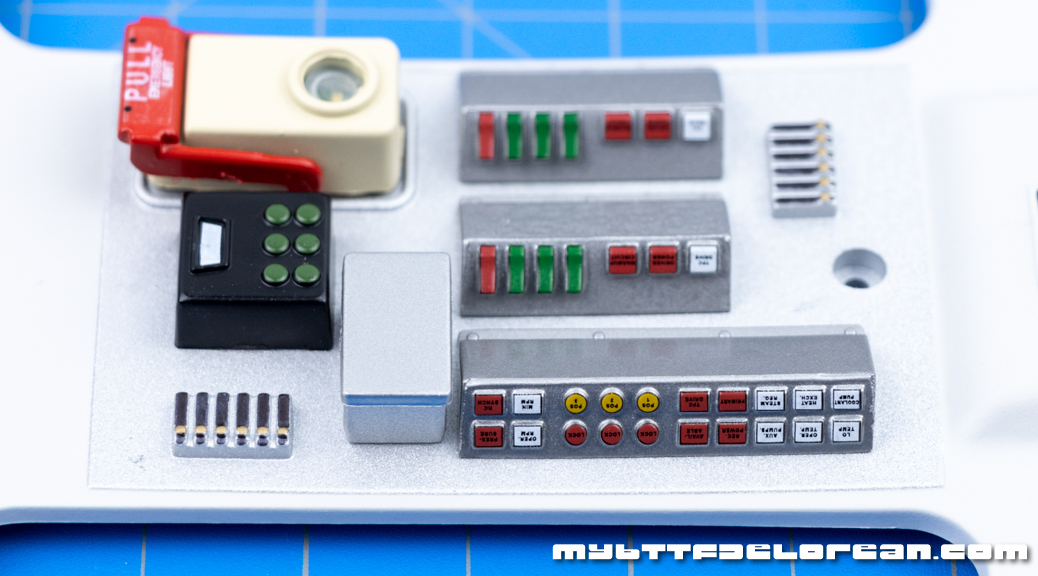 Slide the tab of the Sun Visor (87C – left side) through this notch in the Roof Interior Panel, as shown: 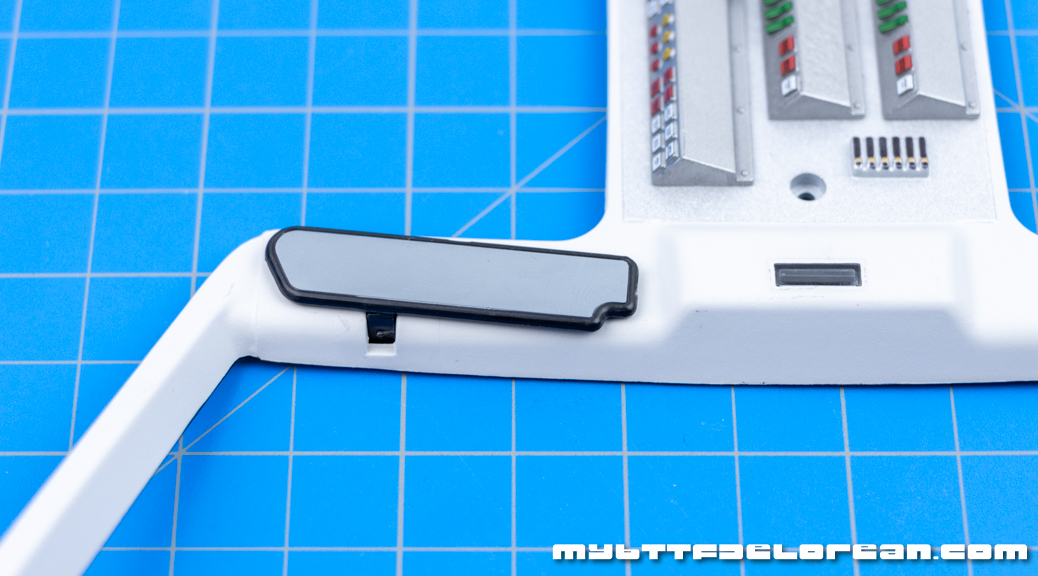 Turn the panel over and push up slightly on the Sun Visor to align the holes, then slide one of the Hinge Pins through them all to hold the Sun Visor in place.

I found that my Sun Visors were a bit loose, so I first put small balls of Blu Tack around the pin grooves to seal them up: 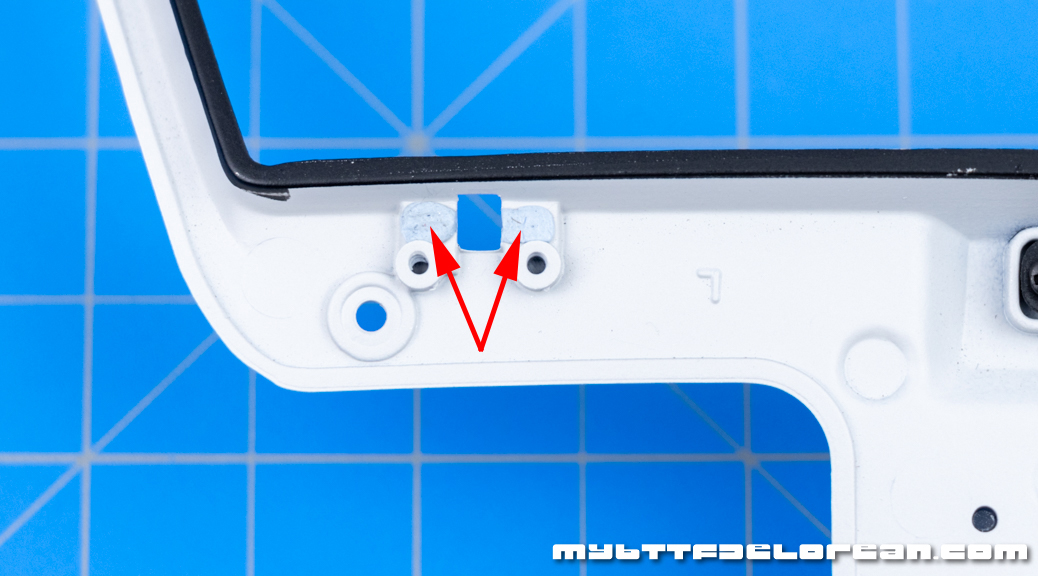 Then, I installed the visor and pin, sticking it in the putty: 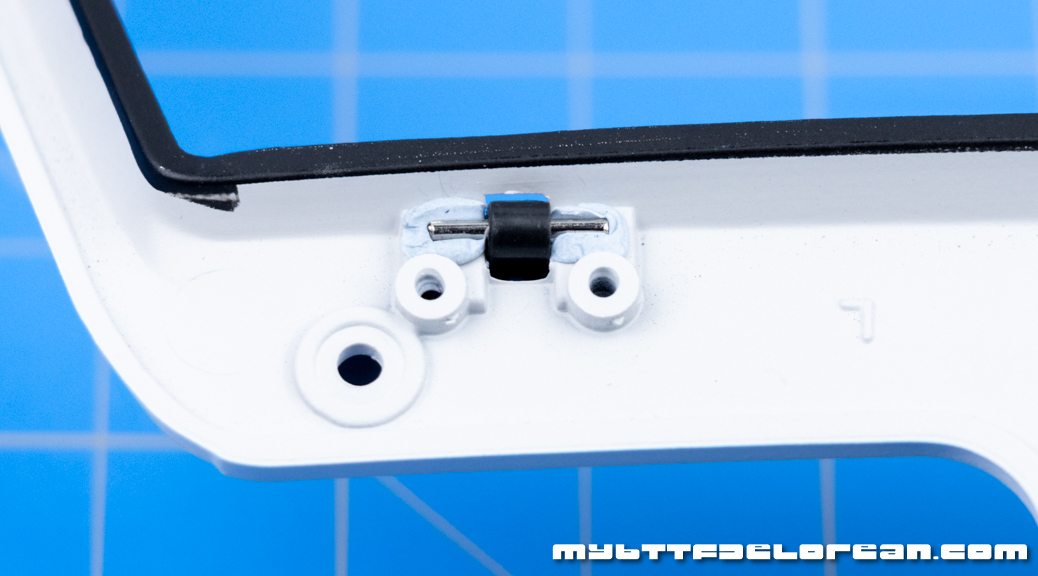 Next, I added a little more Blu Tack on top: 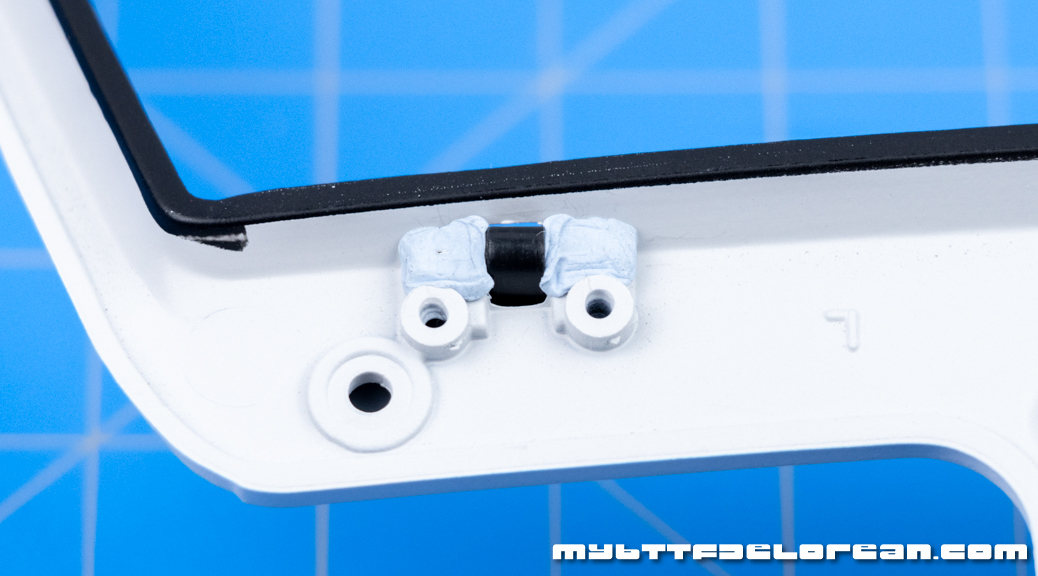 Fit one of the Hinges over the pin as shown, and secure it into place with two (2) IP screws.

With this small addition of Blu Tack putty, the visor is now quite stiff and does not fall down: 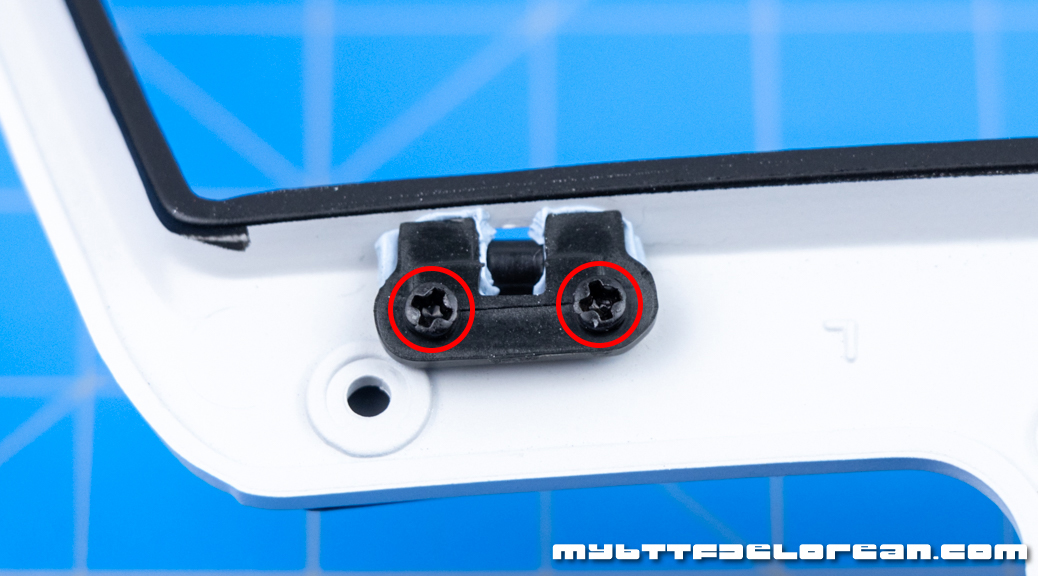 On the other side, slide the tab of the Sun Visor (87D – right side) through this notch in the Roof Interior Panel, as shown: 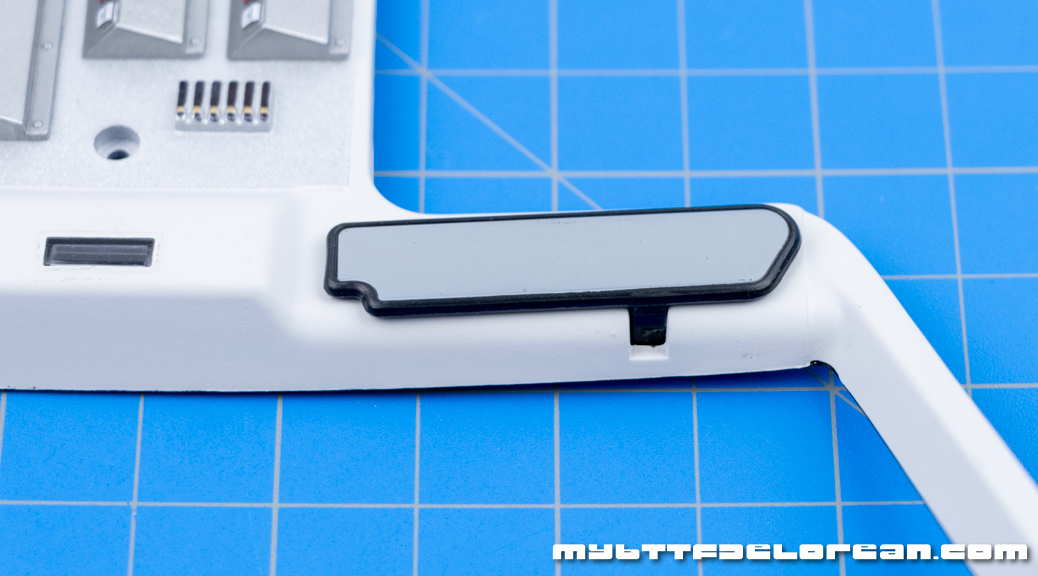 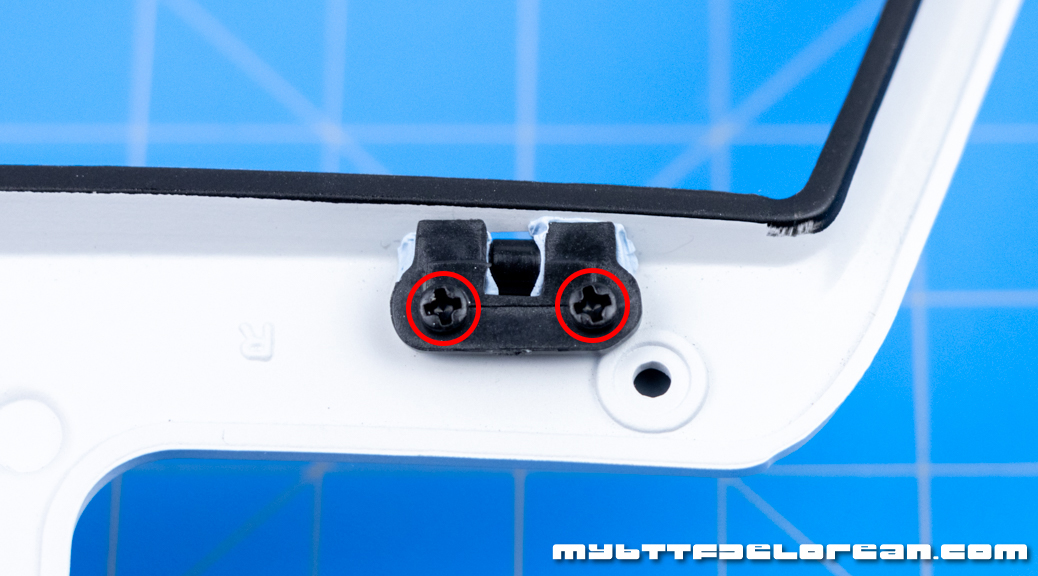 Push the three LEDs of the green/black Wire + 3 LEDs (labelled 13) into these holes of the Roof Interior Panel, as shown: 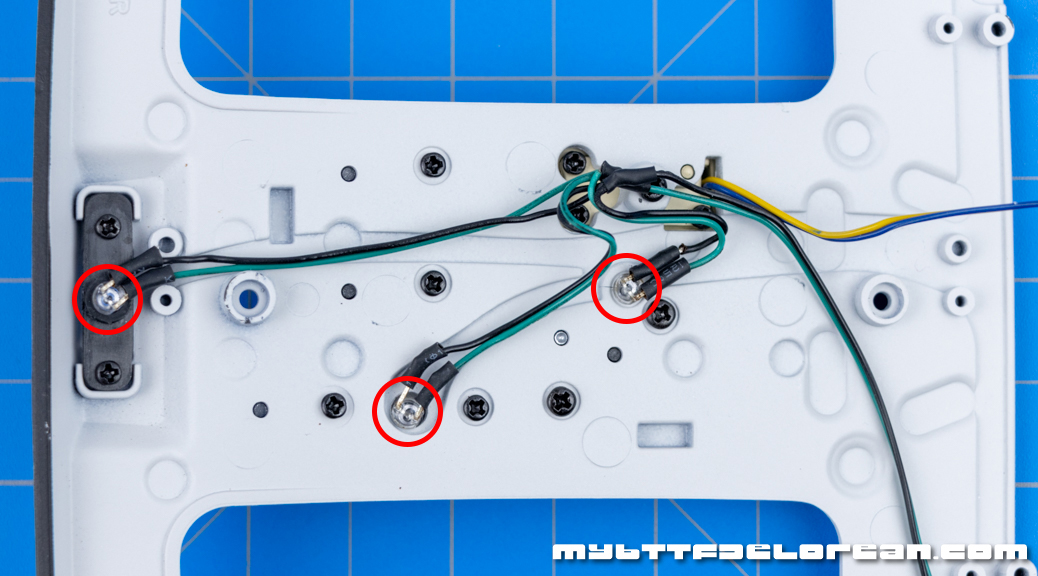 Use three pieces of adhesive Sticker to hold each of these LEDs in place:

These pieces of tape are more likely needed to keep the LEDs from shorting out by contacting the metal roof: 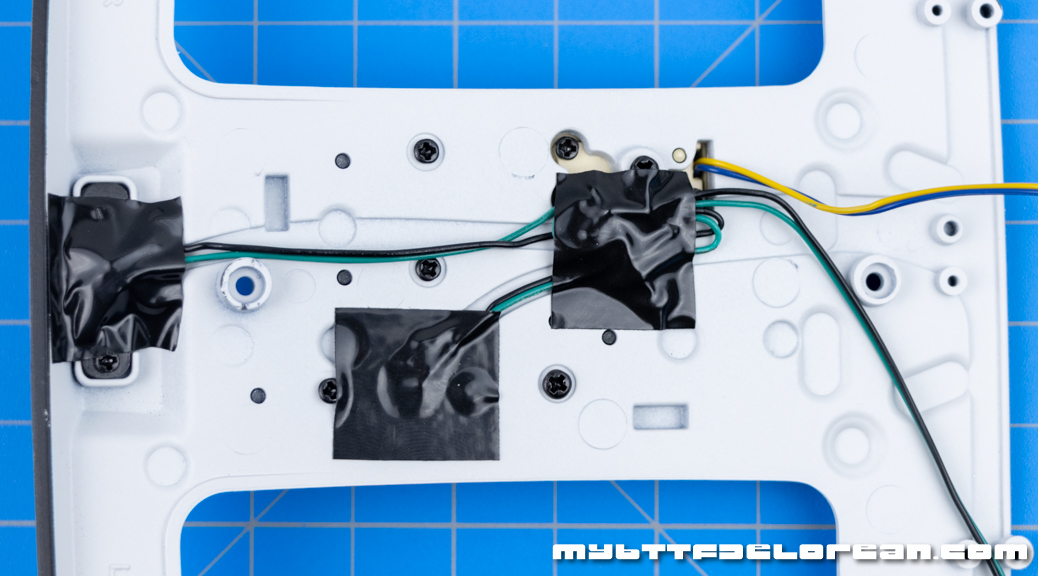 Feed both sets of wires between these two posts at the rear of the Roof Interior Panel and secure them into place with the Tab and one (1) IP screw: 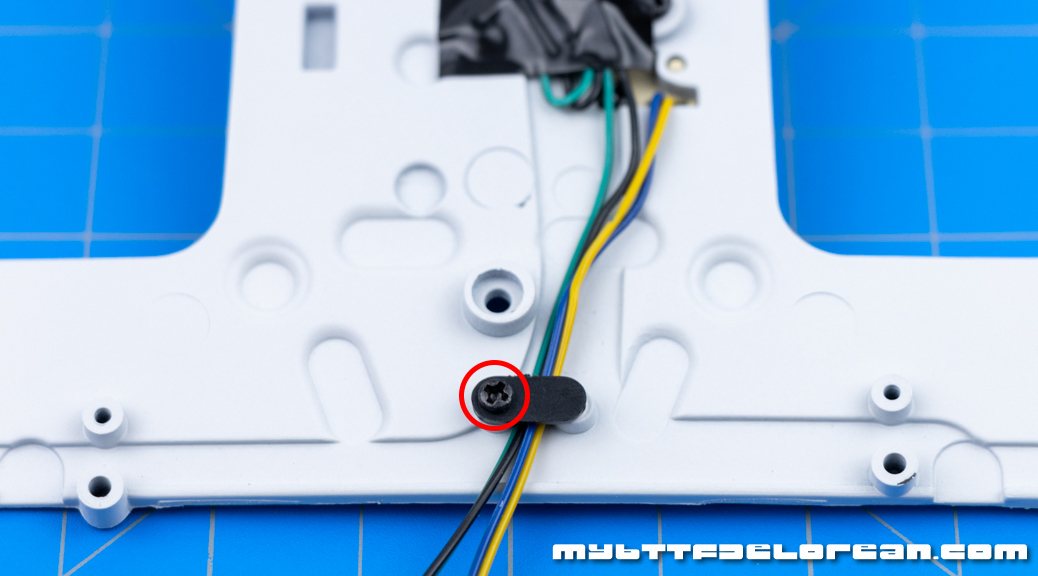 Retrieve your DeLorean body assembly. Locate these two holes in the roof behind the doors and feed the two LEDs of the orange/green Wire + 2 LEDs up through these holes (one on each side):

NOTE: These LEDs are meant to light the flux bands on the roof. However, many builders discovered that they were sent incorrect yellow LEDs in this stage instead of the correct blue LEDs. I hooked mine up to a 4.5V source (three AAA batteries with an inline 470 Ohm resistor) to double-check the color and I did receive the correct blue ones. If yours are yellow, you may receive replacement blue LEDs in Issue 90. 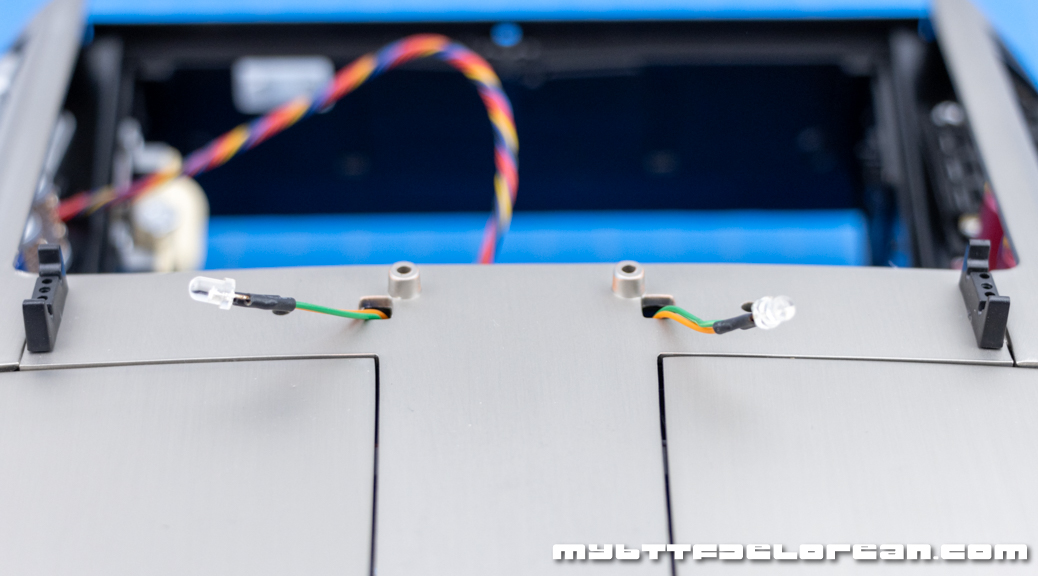 Use two pieces of adhesive Sticker to temporarily secure the LEDs to the roof of the car, as shown: 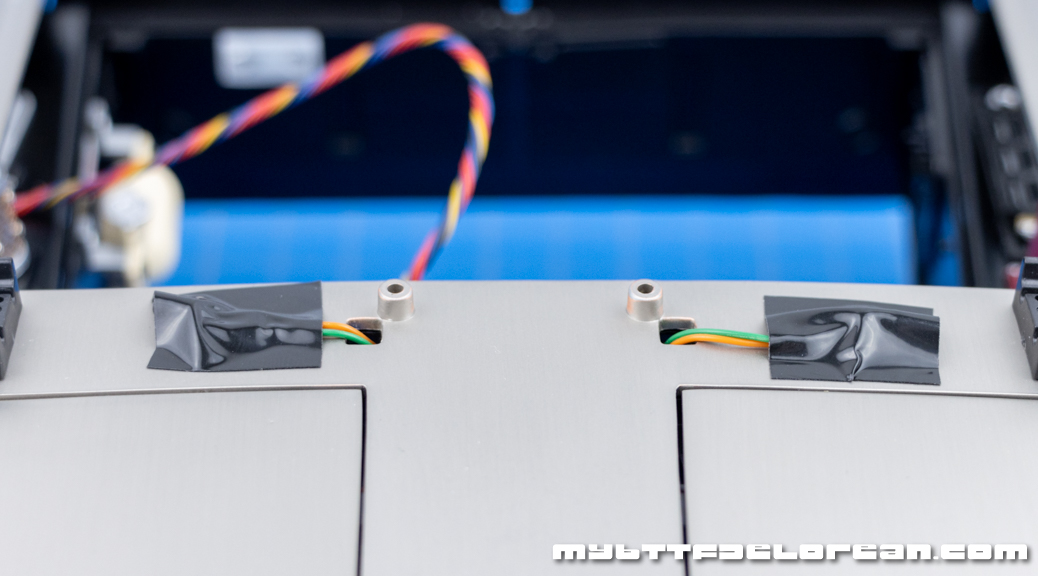 Inside the car, move all of these wires backwards to make room for the Roof Interior Panel: 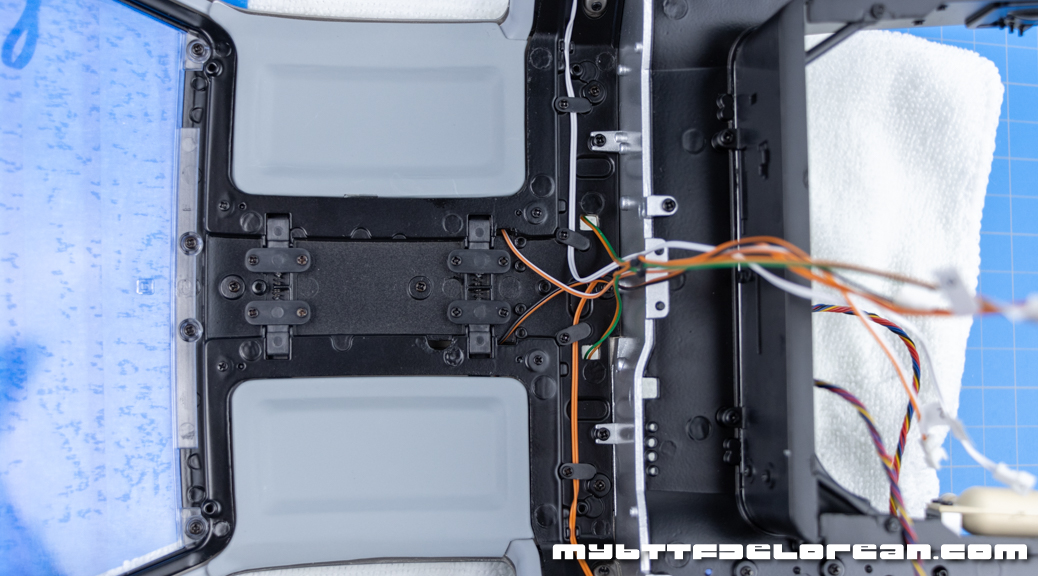 Carefully test fit the Roof Interior Panel assembly into the car (avoiding the rear view mirror, if installed) while making sure all of the wires are clear and facing the back of the car: 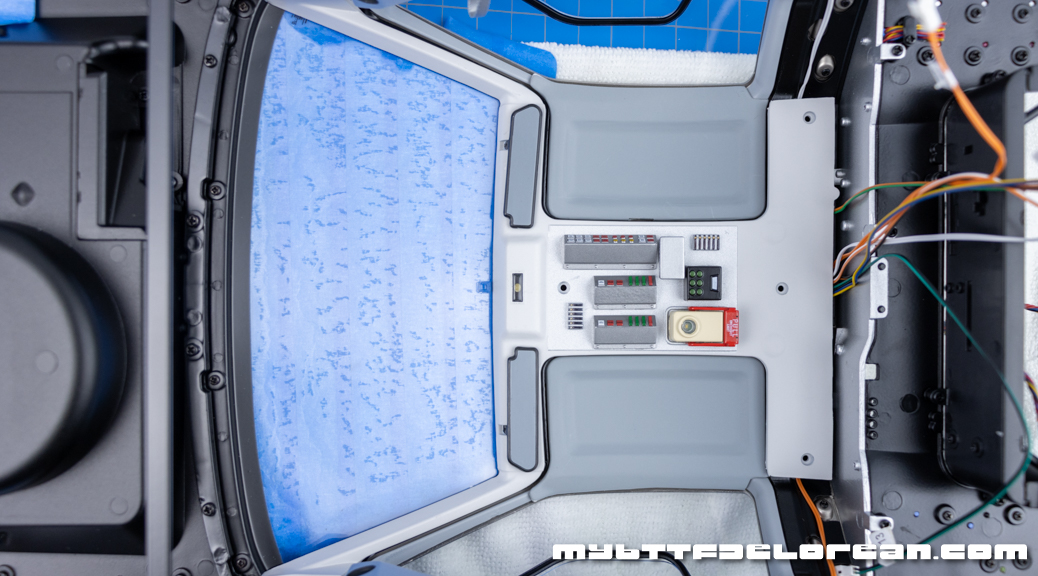 After I test fit this panel, I removed the orange/green Wire + 2 LEDs from the roof because I am installing the The EL Light Mod from Model Modz, I only showed the previous steps for those builders not going that route. These LEDs are not needed when using the EL mod: 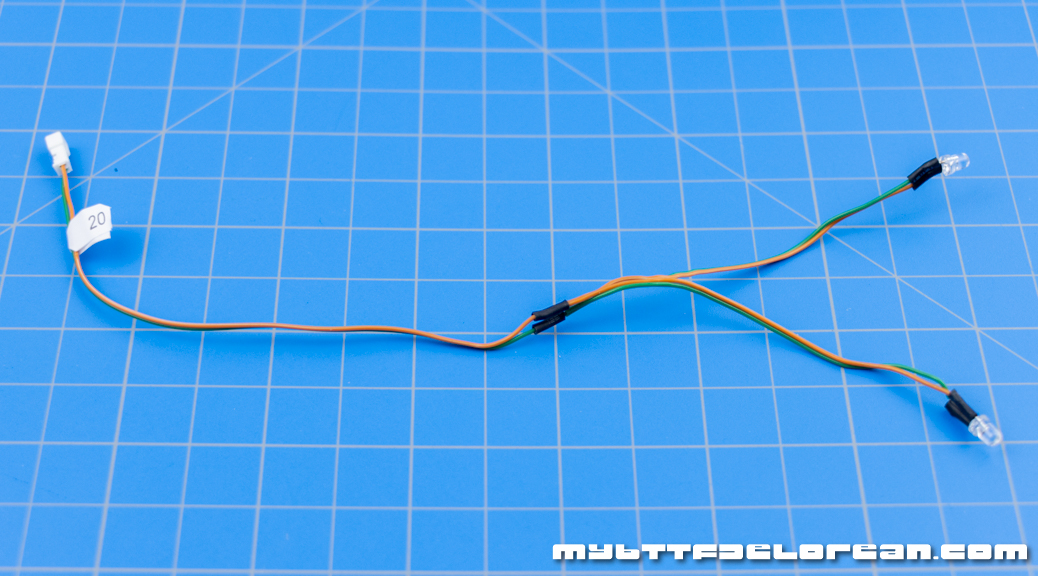 If the test fit is successful, flip up both Sun Visors up to gain access to the screw holes underneath and secure the Roof Interior Panel to the body with six (6) NM screws, as shown. 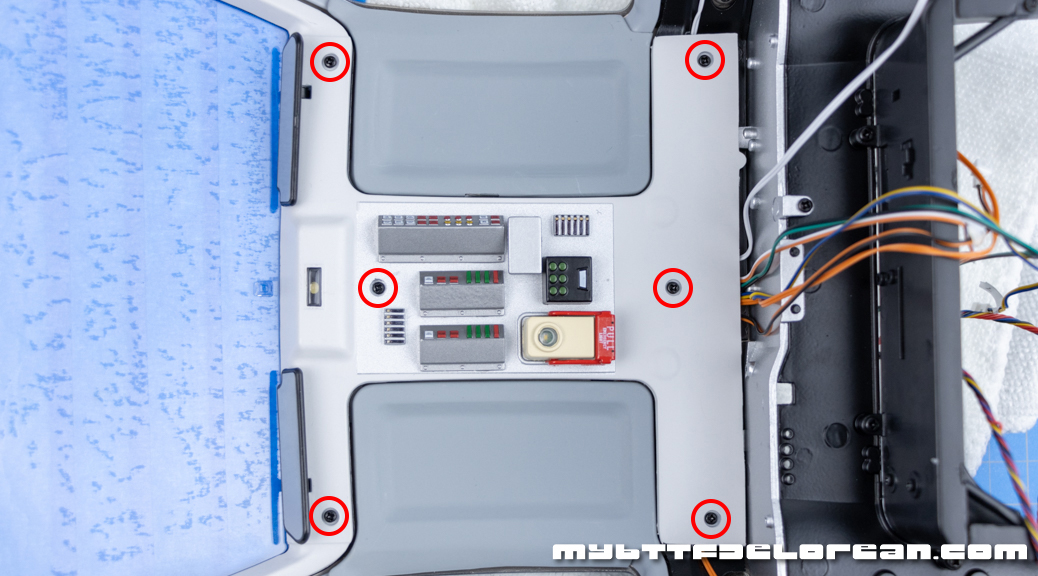 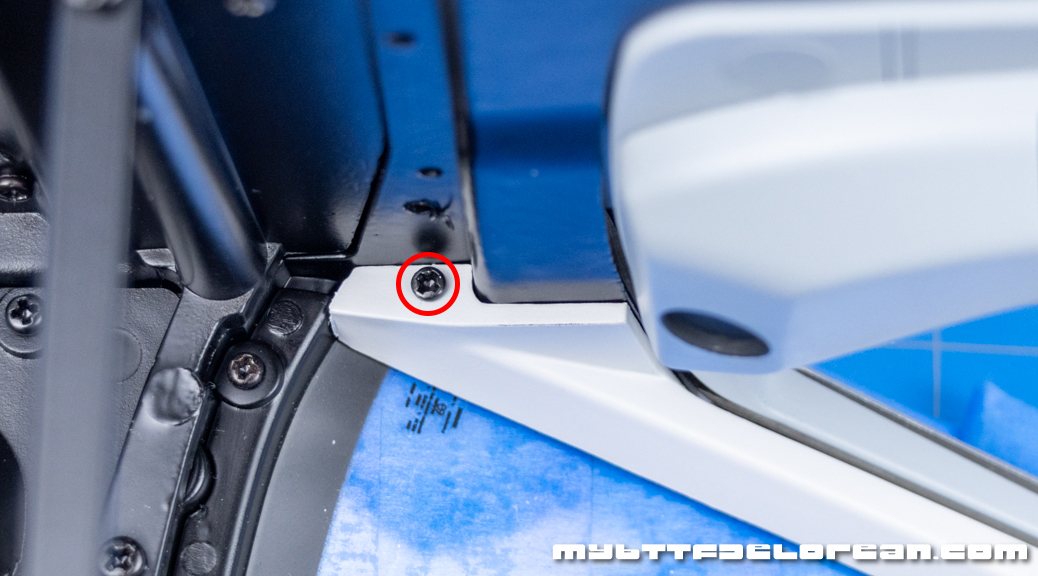 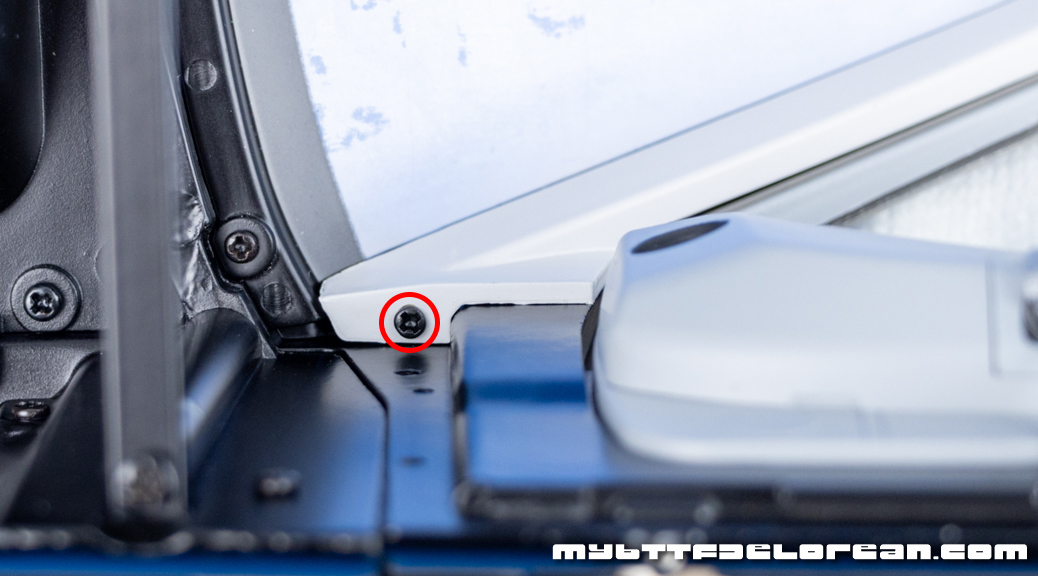 There was a lot to do in this issue, but we have our roof installed and complete. It looks pretty sharp!