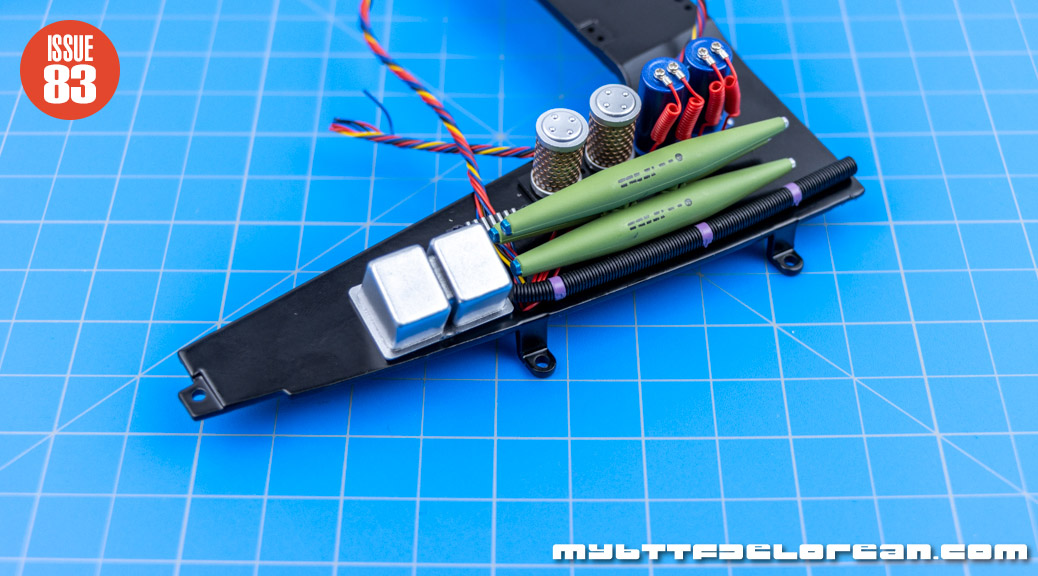 “… construct and add more details to the right side of the engine surround.” 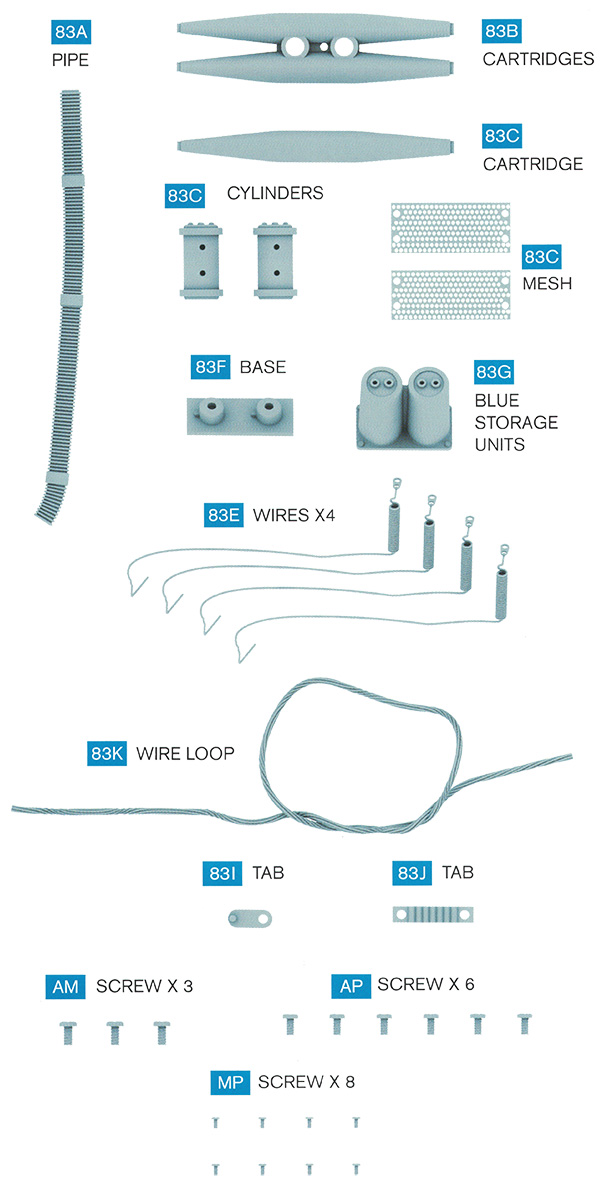 Materials: Other than the photo-etched metal Mesh, everything non-electrical is plastic in this issue. 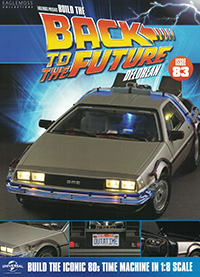 On The ‘A’ Car, these Cylinders are model 44AW56 small air flow mufflers from Atomufflers. 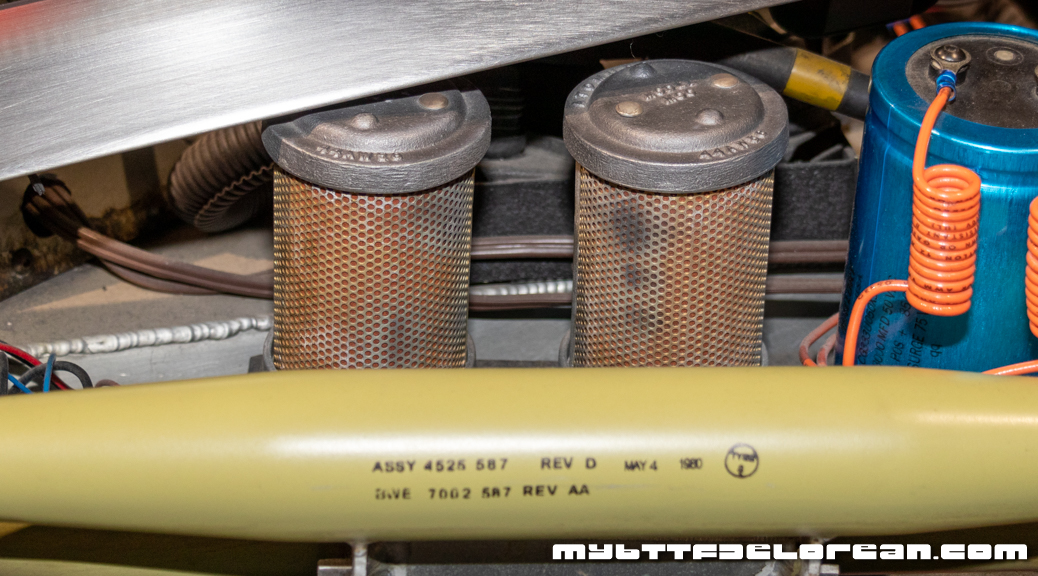 The stock parts are a shiny silver photo-etched Mesh. I decided to at least get close to the real car by using my Metallic Bronze Sharpie on them: 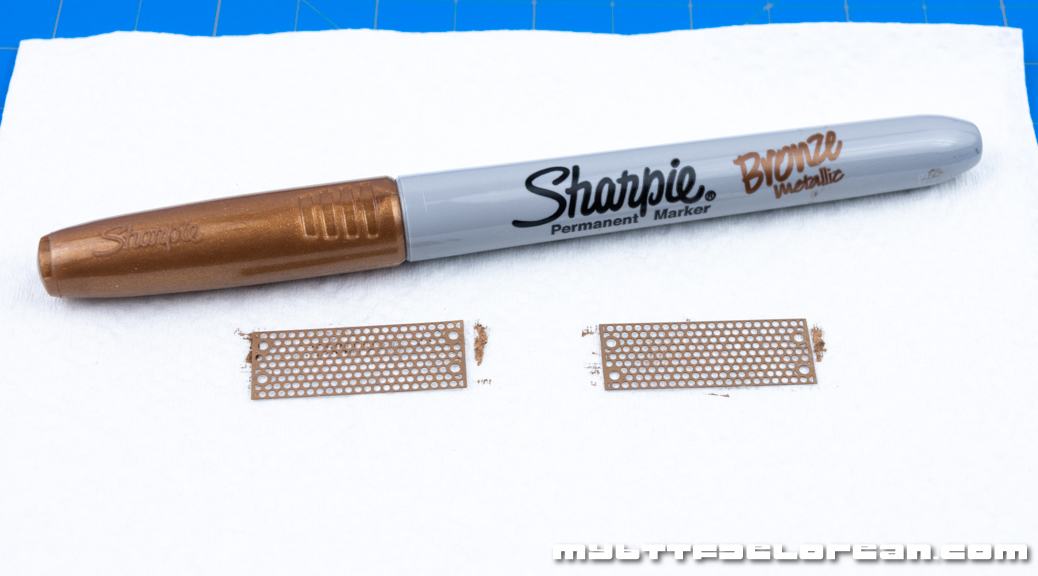 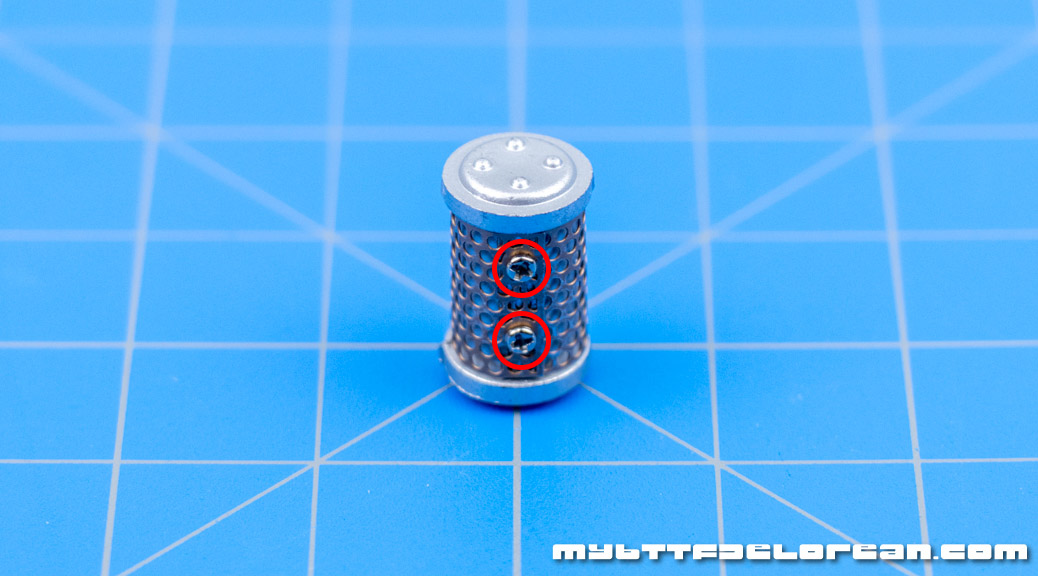 Repeat the previous steps using the remaining Mesh and Cylinder to create a second one using two (2) more MP screws: 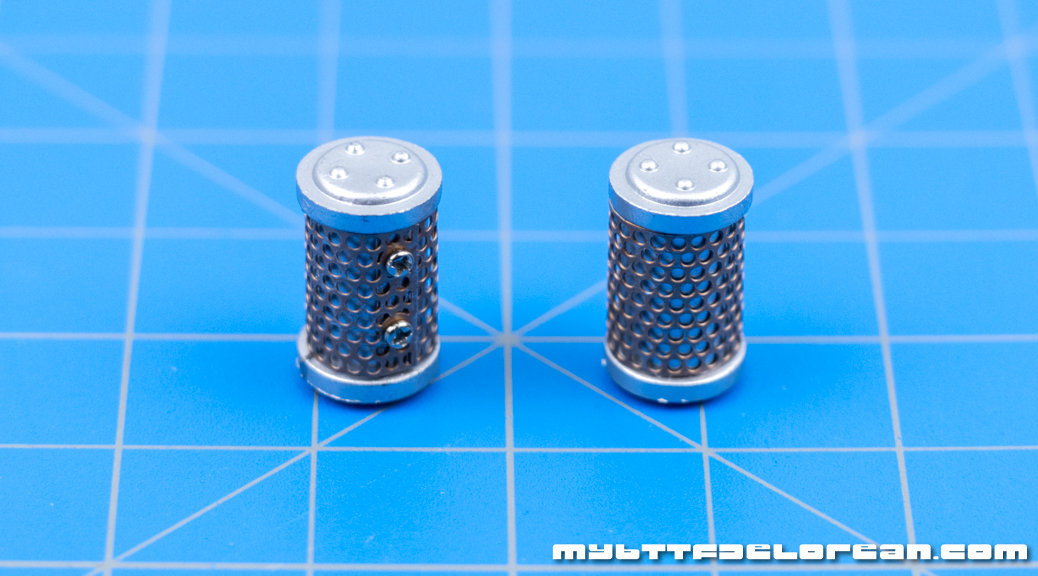 Fit these Cylinder assemblies over the two keyed posts of the Base, and secure the Cylinders to the Base from below with two (2) AP screws: 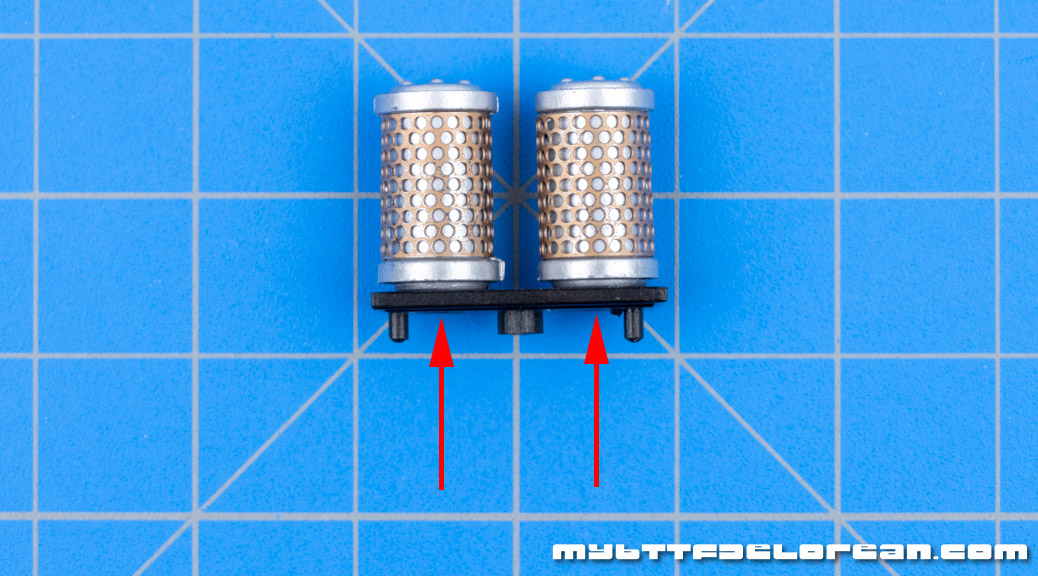 The MP screws used to build the Cylinders should be facing inward towards the center of the car: 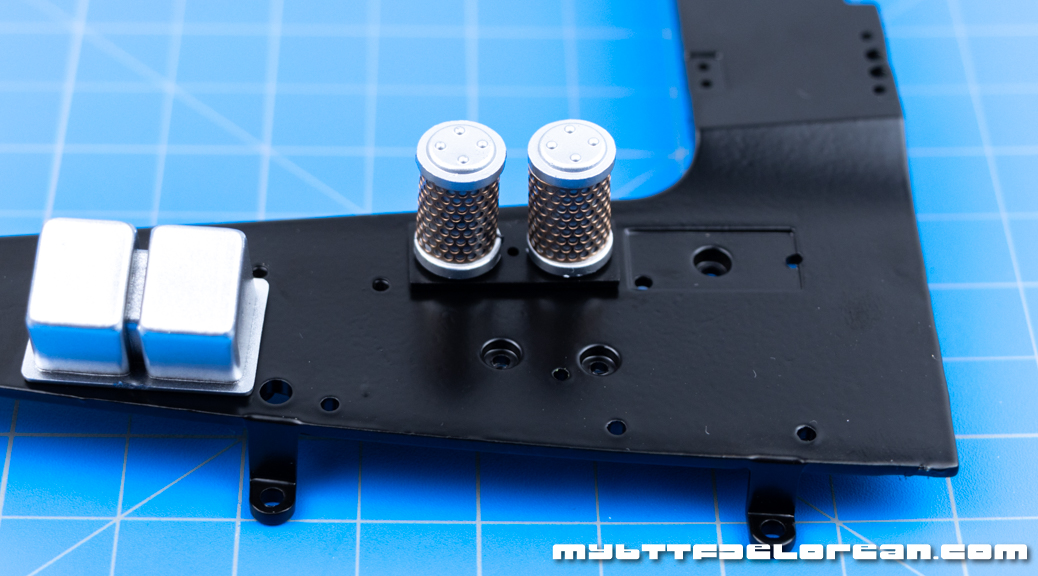 Secure this assembly into place from below with one (1) AP screw: 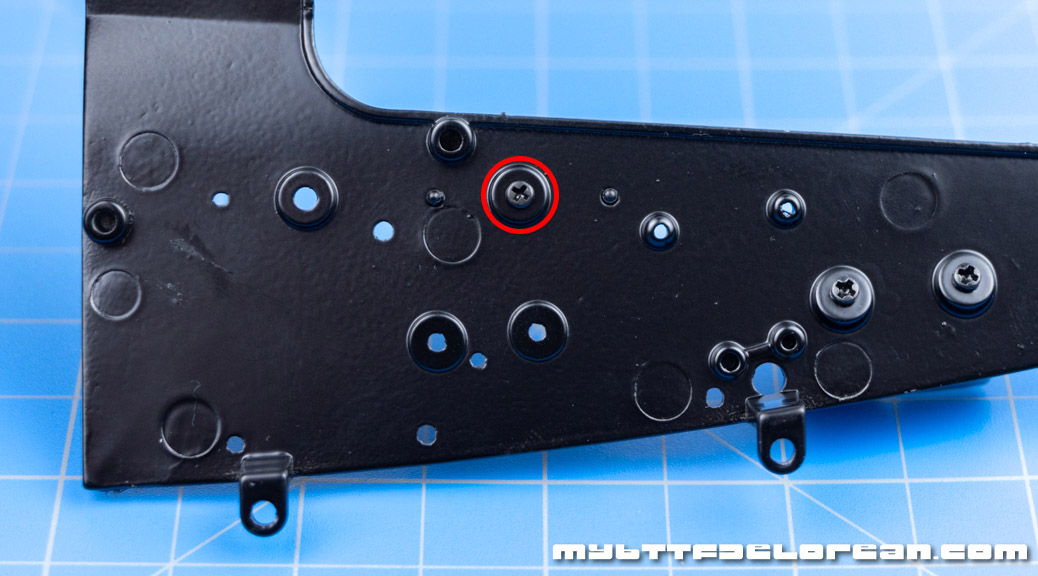 Fit the Blue Storage Units to the Engine surround as shown, aligning the pins and post as shown:

Fun Fact: On The ‘A’ Car, these are model CG333U050X5L capacitors from Cornell Dubilier (formerly Mallory): 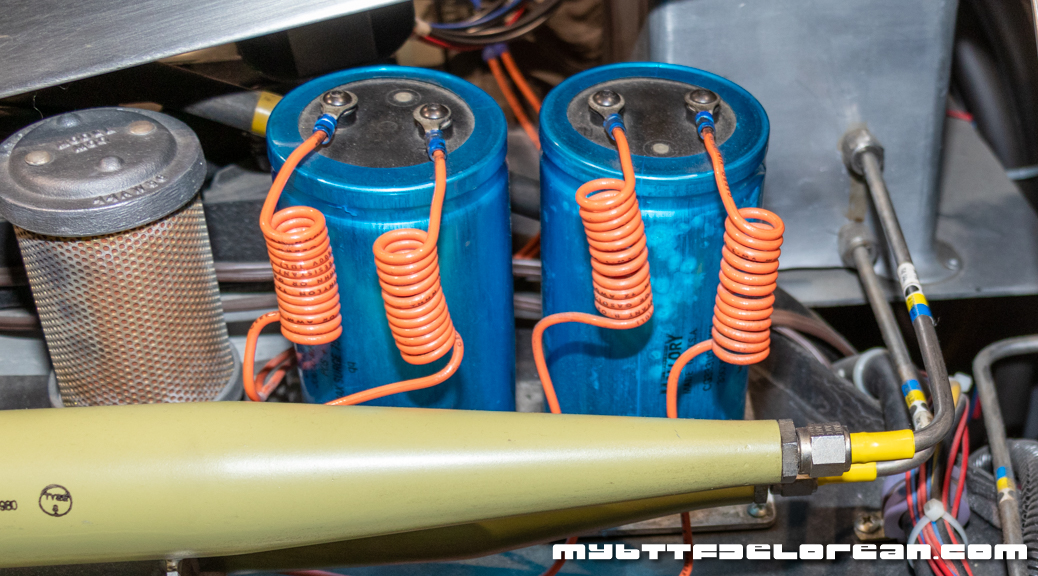 I touched up the ‘screws’ on the base plates with my Metallic Silver Sharpie here: 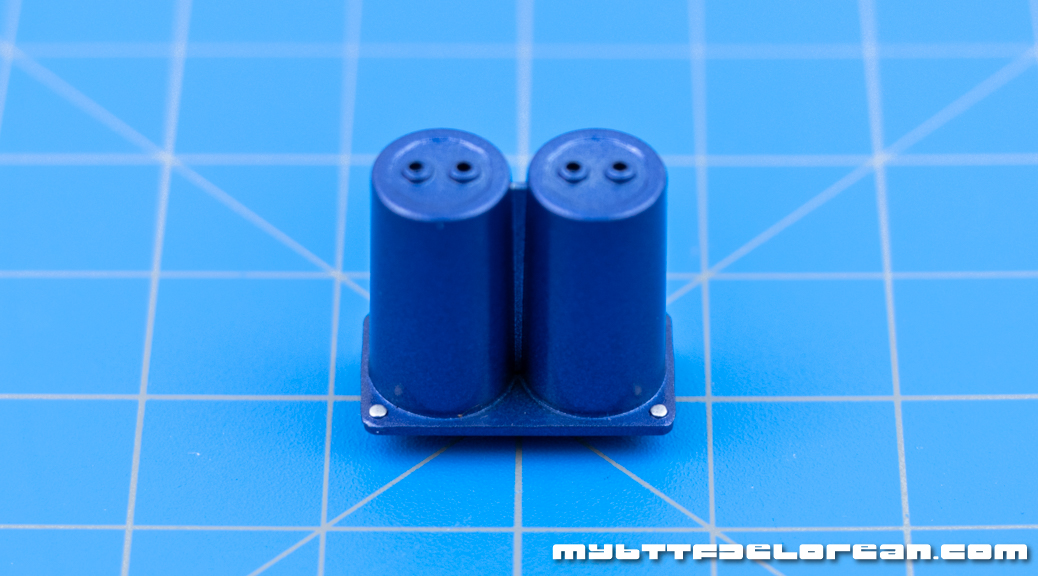 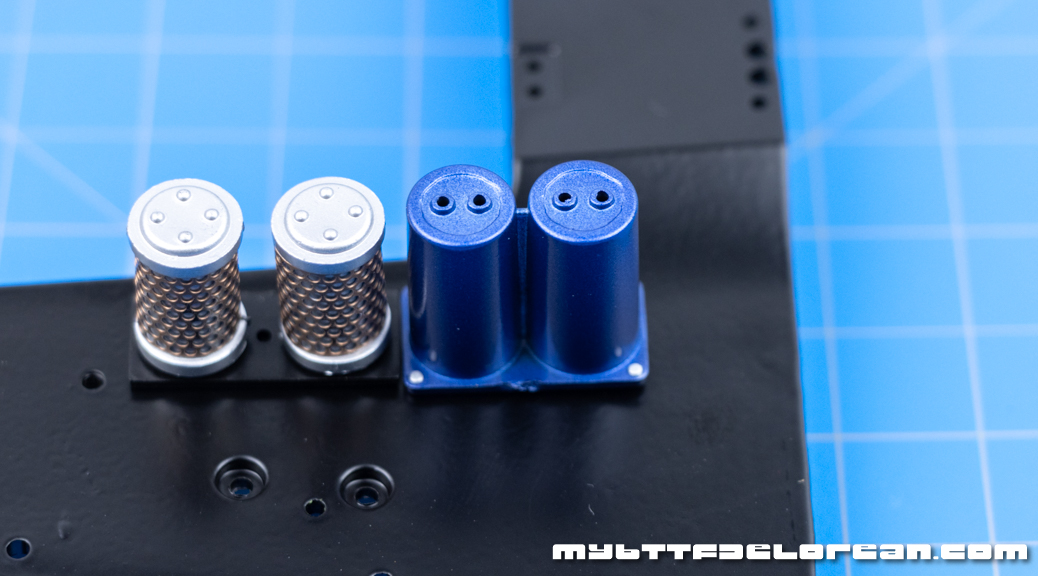 Secure these Blue Storage Units from below with one (1) AP screw: 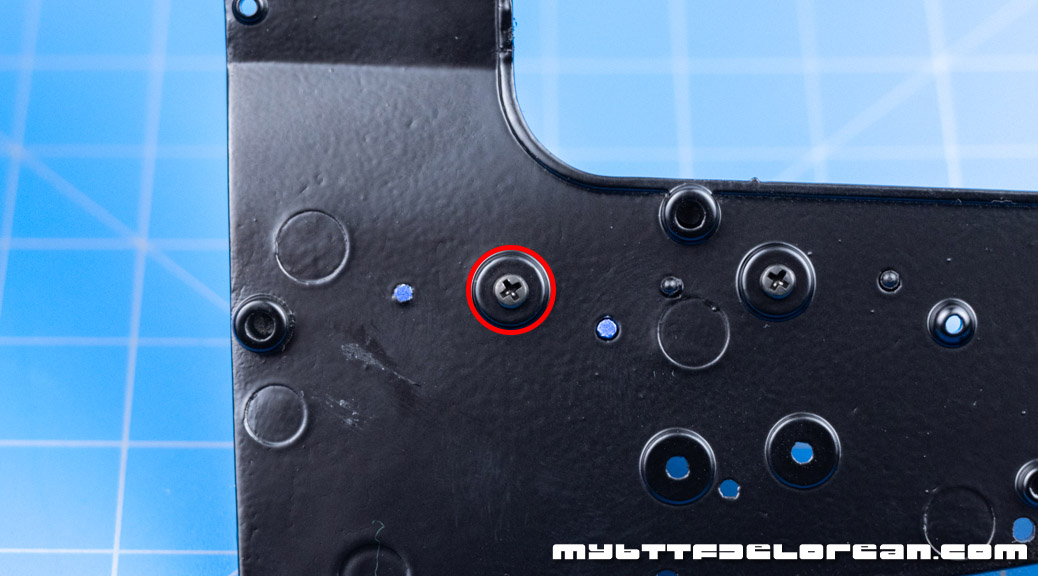 Attach the metal rings of two Wires to the posts on the forward Blue Storage Unit with two (2) MP screws, one each. Run the free end of the wires through the circled hole of the Engine Surround: 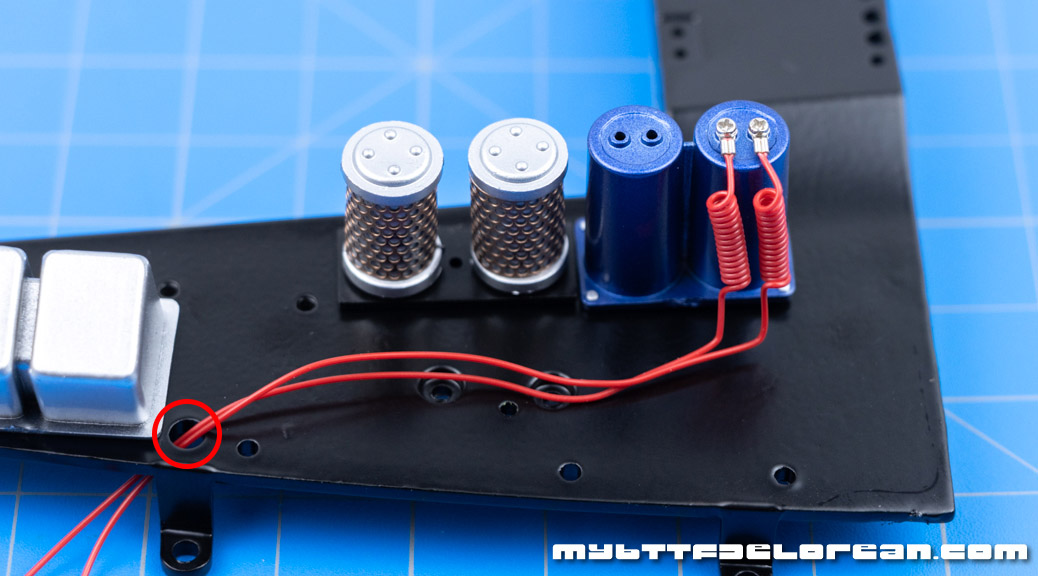 Attach the metal rings of two Wires to the posts on the rear Blue Storage Unit with two (2) MP screws, one each. Run the free ends of these wires through the same hole: 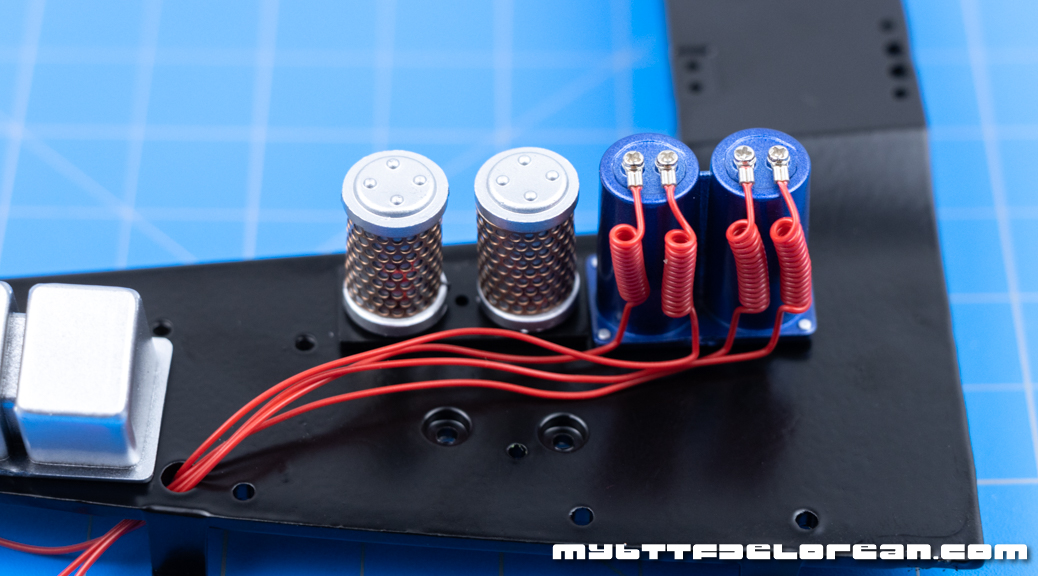 Fit one end of the Wire Loop down through the same hole in the Engine Surround as the previous step: 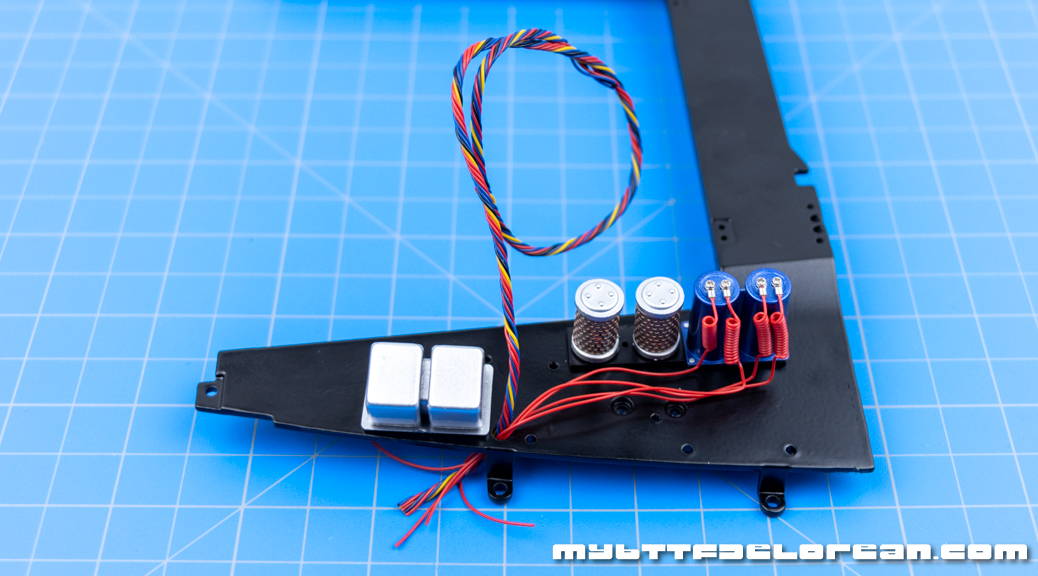 Turn the Engine Surround over and secure all of these wires using the round Tab (83I) and one (1) AM screw.

Only capture enough of the Wire Loop to secure it place, we may need the length later: 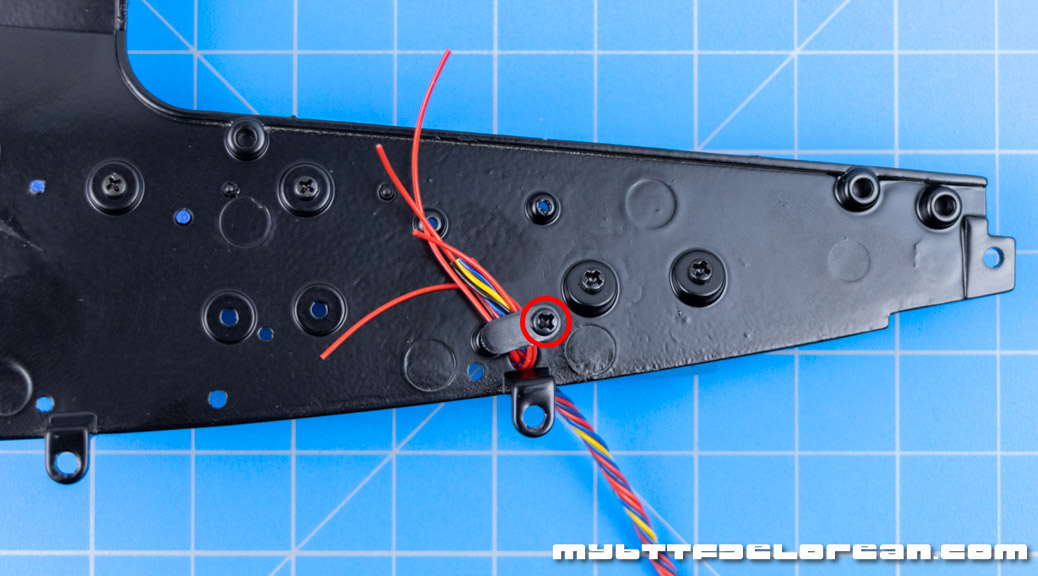 Flip the Engine Surround back upright and secure the Wire Loop under the long Tab (83J) with two (2) AM screws.

I ‘unwound’ the Wire Loop a little at this spot so it appears to be connected to the ‘junction block’ Tab: 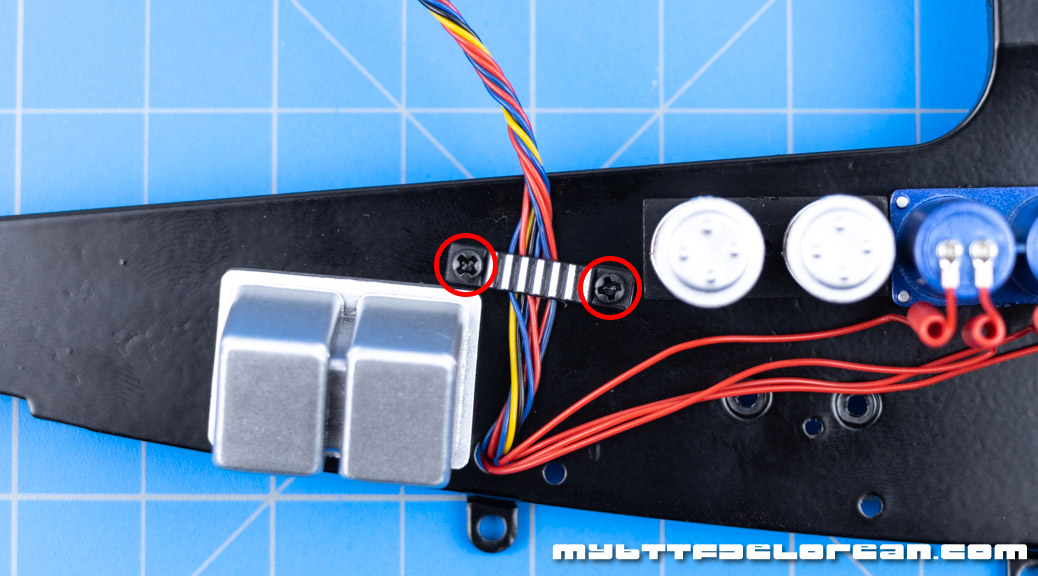 Push the three pins of the Pipe into these matching holes of the Engine Surround.

This is a press-fit and does not require any screws or glue: 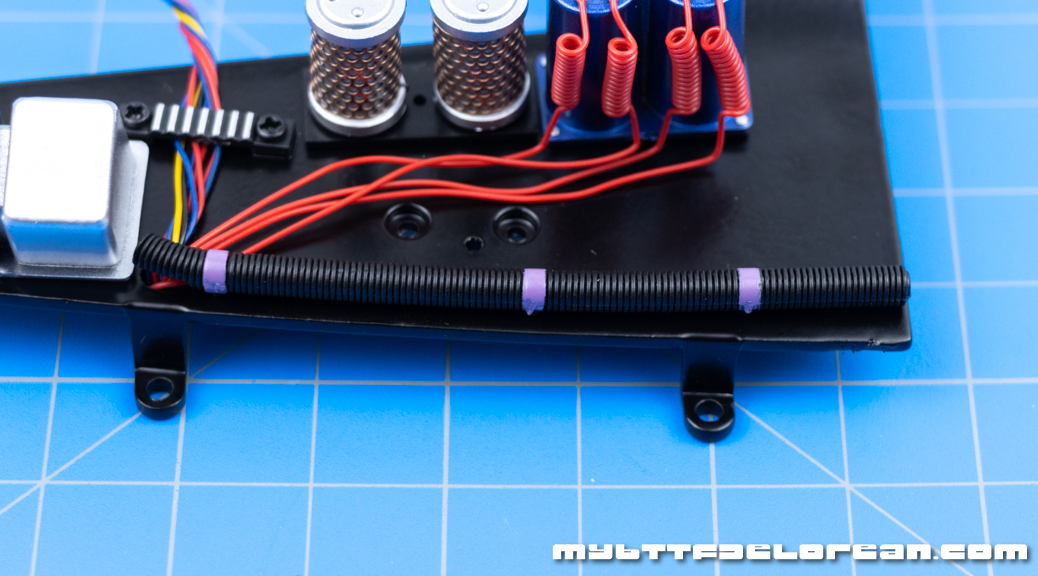 On The ‘A’ Car, these ‘Cartridges‘ are Aircraft Rigid Connecting Links from Tyee: 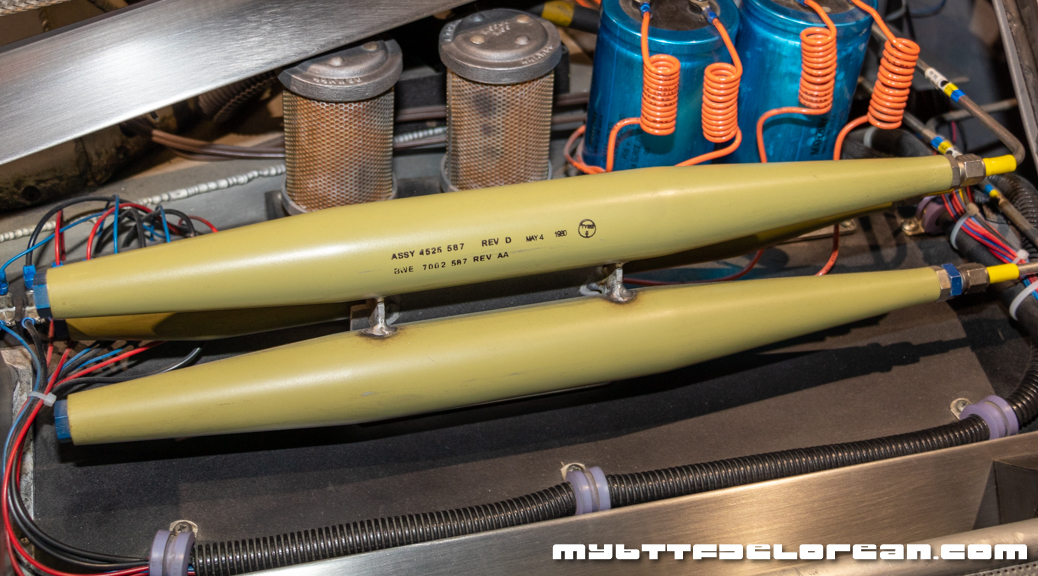 I did not like color of these parts, so I airbrushed them with Model Master Green Zinc Chromate 4852 to better match the real car: 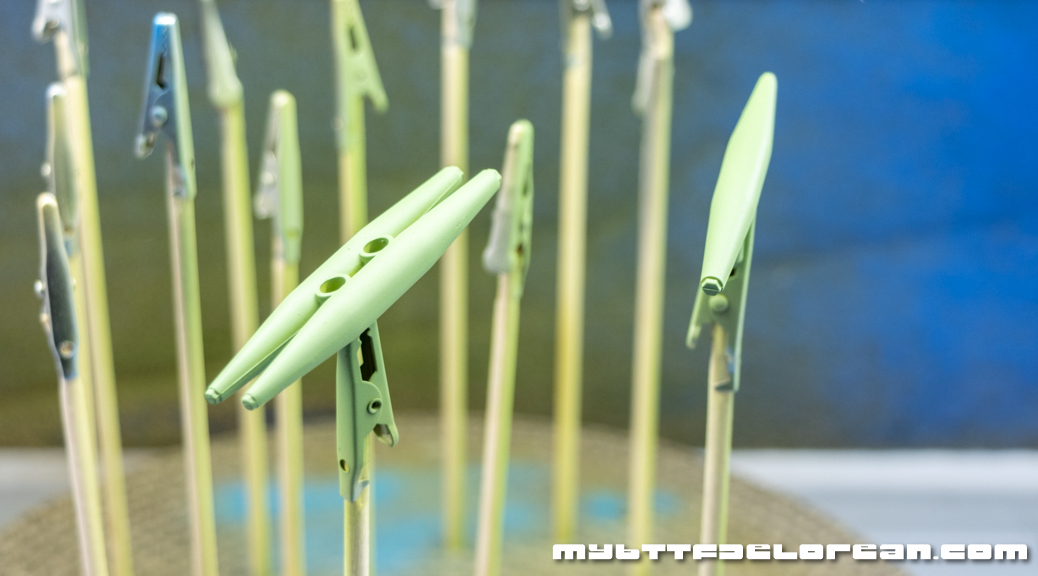 To recreate the colored bolts in each end, I used a tiny brush to apply Tamiya X-13 Metallic Blue acrylic paint on the ‘bigger’ rear bolts: 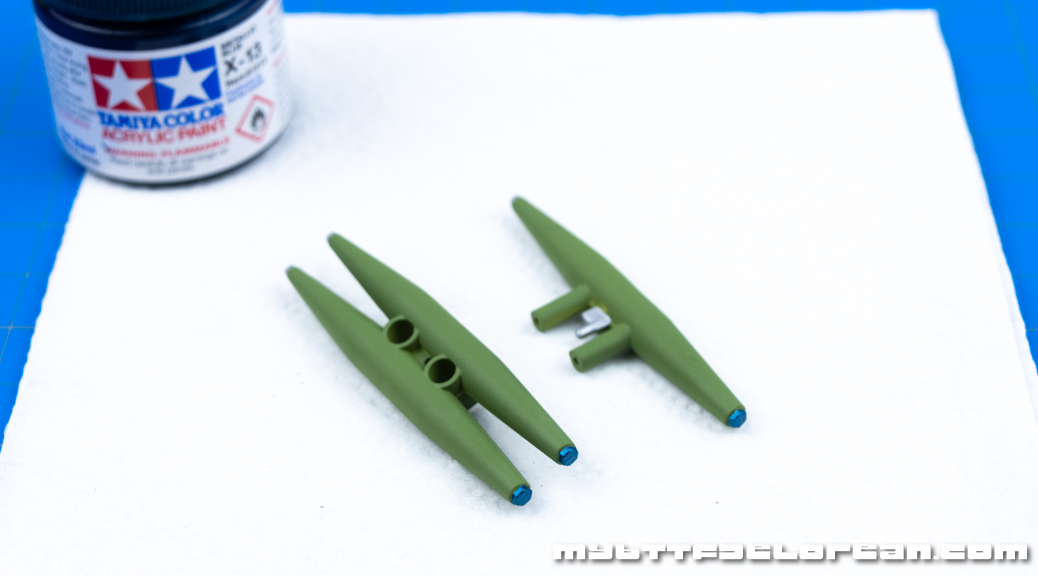 For the bolts on the other end, I just used my Metallic Silver Sharpie: 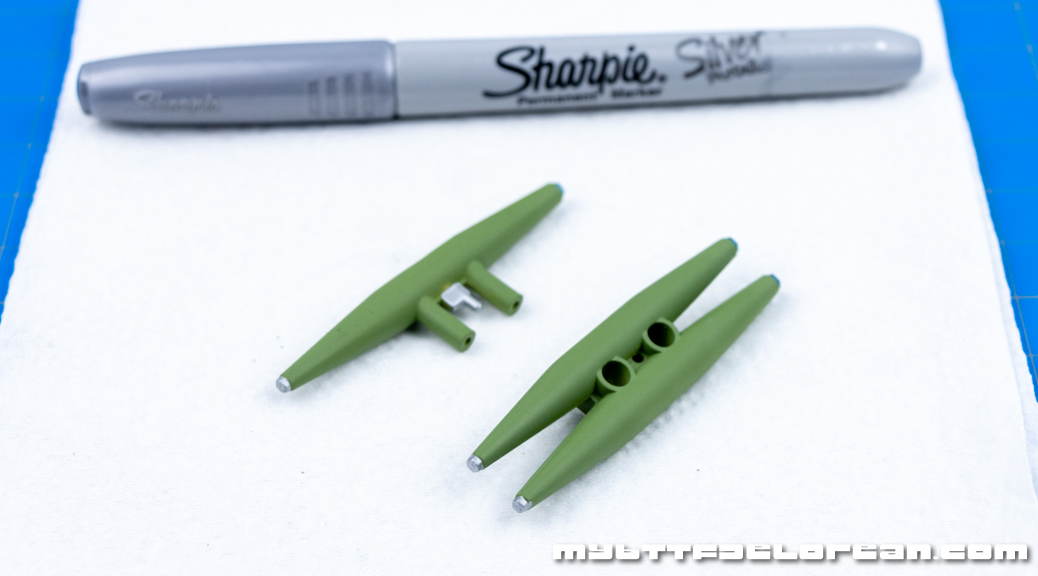 Slide the single Cartridge down into the double Cartridges, aligning the posts as shown.

Ensure the colored ends of all three Cartridges match: 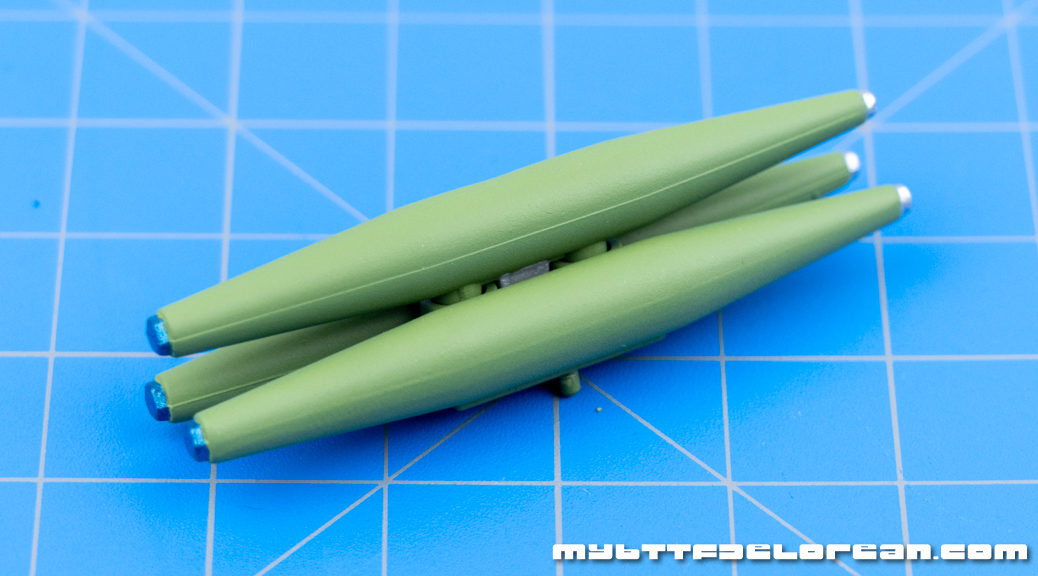 Fit this Cartridges assembly to the Engine Surround, aligning the posts and pin as shown: 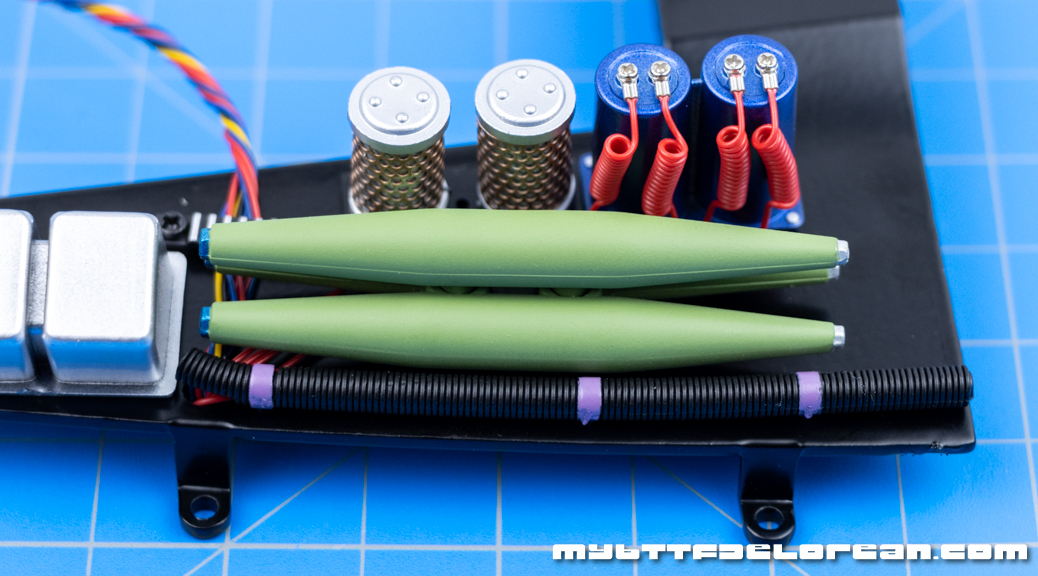 Secure these Cartridges into place from below with two (2) AP screws: 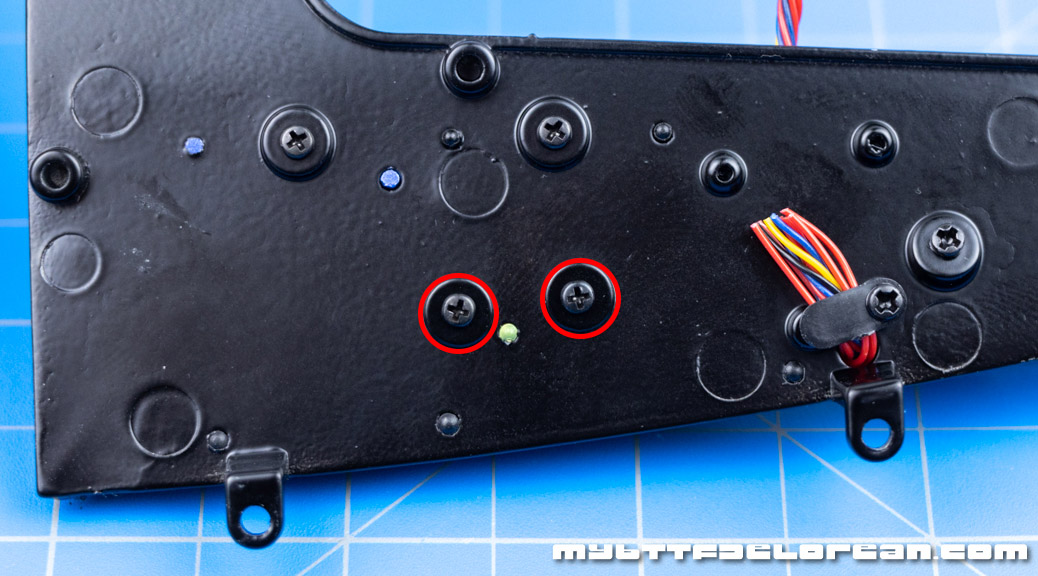 Now that these Cartridges are mounted, I wanted to add the lettering seen in the ‘A’ car photo above. Luckily, Mike Lane has created two options for this. One is a set of decals in his Decal Set III. The other is this fantastic Green Tube Transfers mod! These dry transfer decals are applied in the same way as the radioactive symbol on the Reactor Disc 3 back in Issue 04: 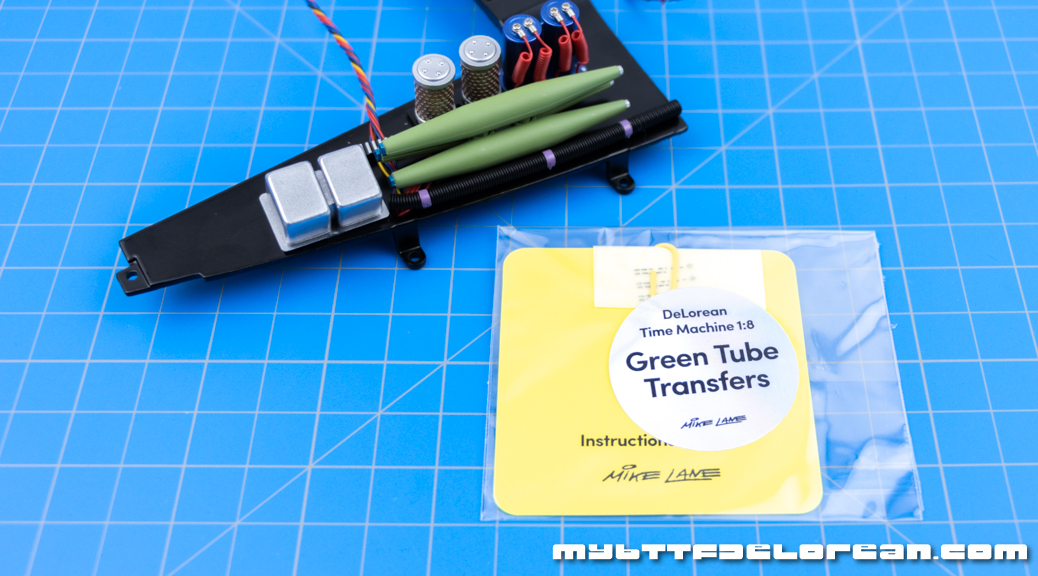 These are great! The real car only has the label on the top one visible, but I liked it on both. They really make the Cartridges pop! 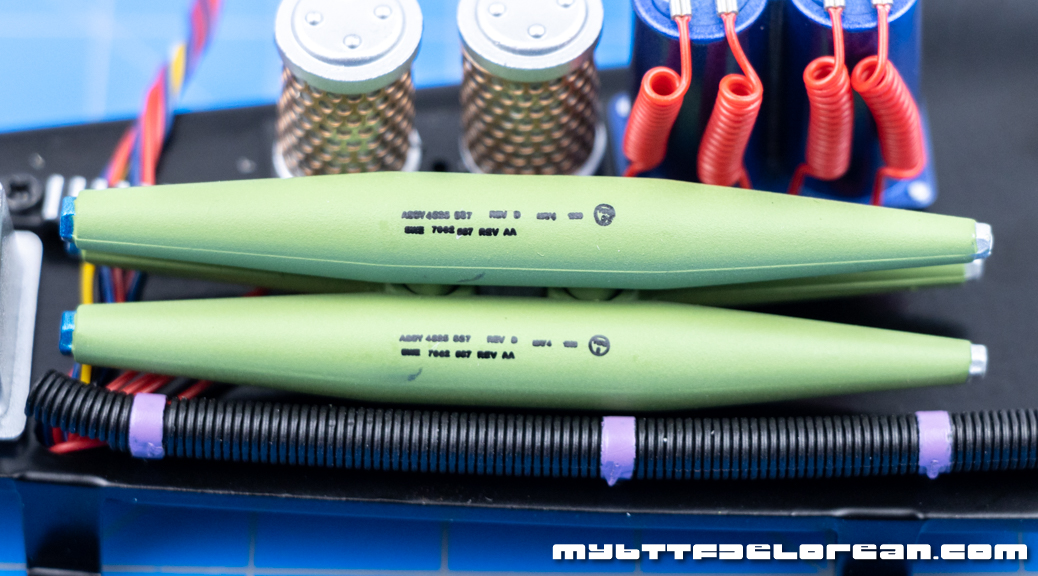 I’m not going to cover these last two steps of the instructions. They only serve to store the Wire Loop until we need it later, but it can be confusing to many builders. Just leave the Wire Loop alone for now; it does not need to be wrapped around anything:

This issue was a lot of work, but that is because I modded so many things!