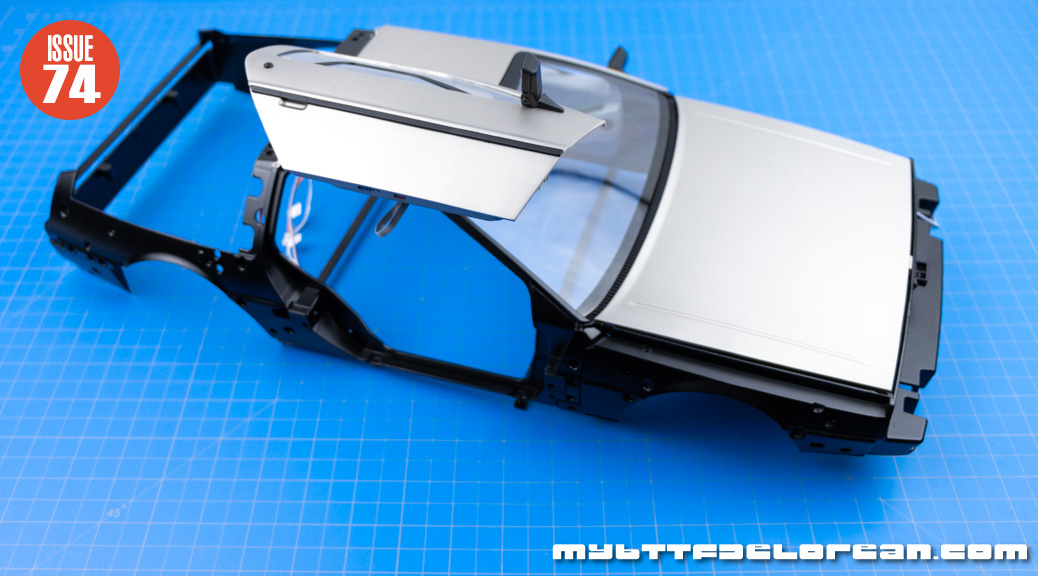 “In this issue, you’ll fit the right-side door to your DeLorean… Ensure that the wire for the door lights passes freely through the opening at the top of the door.”

This issue is a near duplicate of Issue 70, just with the opposite door. This was also one of the really hard to find issues as it was out of stock at Eaglemoss for a very long time.

There is an undocumented part included with this issue: a small black plastic rectangle. This is the other door block to hold this door open. Materials: Everything in this issue is metal. Retrieve the door assembly from the previous issue and turn it over. Place the Hinge Panel into position as shown, making sure the wires come out through this small gap: Secure the Hinge Panel to the door with four (4) NM screws, Retrieve the body assembly (last used in Issue 70). Fit the Hydraulic Arm into this small recess on the passenger side roof, as shown: Secure the arm to the body using the Arm Plate and one (1) QM screw, as shown.

Like the first door, my QM screw would not go all the way in, so I cut about 1 mm off the end of it. Then, it went in fine: Feed the plug/wire from the door assembly through this square hole at the center of the body assembly roof: Take the door assembly and place it into position on the body assembly, aligning the hinges like we did on the first door: If the Hinge holes line up, secure both sides from inside the body with two (2) QM screws.

NOTE: It is pretty well known that these hinges are delicate and the QM screws can be too long. You can either cut 1 mm off each QM screw, or use a couple of your spare KM screws (I had two KM spares at this point). However, unlike on my first door, I used the KM screws again and BOTH of them snapped off: Therefore, I had to order a replacement of this issue. When it finally arrived I noticed something odd. My stockpile of older QM screws and the ones supplied with this issue are DIFFERENT. The QM screws with this issue are shorter and have different heads. Maybe that’s why Eaglemoss was taking so long to get these issues out to people; they had to change the screws. Perhaps that is why this particular issue was so hard to find for so long. Regardless, I removed the old useless Hinge Panel and threw it out. Since this is the point in my build where I started using 3-in-One Oil on all my metal screws, I took the replacement Hinge Panel and pre-threaded the hinge screws with the supplied shorter QM screws. I had no problems so far: This time, the door attached to the body just fine. I did not over-tighten these as it feels like they could strip with too much force: Turn the entire body over again and secure the free end of the Hydraulic Arm to the Hinge Panel with one (1) QM screw, as shown: This step is the last of the issue, but we have this odd plastic block left over. Do not discard this! This is the other door block as described in Issue 70: Slide it into this gap to hold the door open as needed: With the second door now installed, I can install the other custom headliner cover from Bill Will Green as in Issue 70: Both of the DeLorean’s door are mounted! I wish those KM screws hadn’t broken as it took a while to get a replacement issue. Still, the car is looking better and better with each issue.