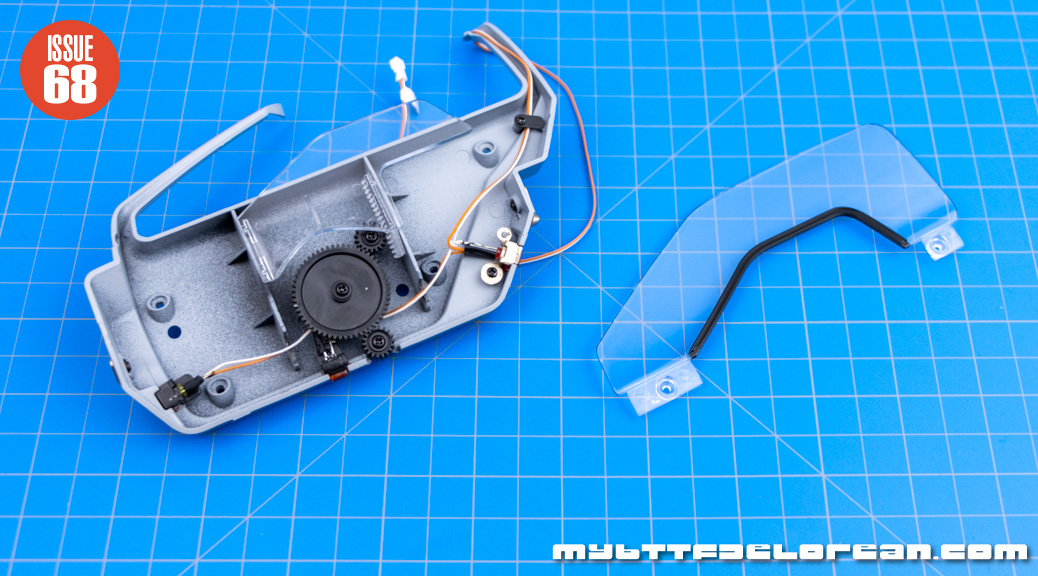 Materials: Everything non-electrical in this issue is plastic. As I mentioned in the previous issue, the DeLorean door’s center marker light should be yellow. While we already tackled the lens color, I am also going to change out the middle LED of this Cable. Eaglemoss installed a red LED here, and behind our orange lens, it will not look right at all: For this Cable, the longer positive (+) lead is attached to the white wires: I found some 3mm Yellow LEDs on Amazon in a Multi-Color LED Pack. I placed one of the new LEDs next to the existing to match the polarity and cut the leads down to the same length as the old LED (this picture was before I shortened the new LED leads): To get started, we need to remove the two small pieces of heat shrink tubing on each lead. I used a hobby knife for this: Now, we need to remove the middle red LED from the Cable. This job required my soldering iron, so be sure you are taking the necessary safety precautions from the high heat. Please don’t injure yourself! Only touch the iron to the solder long enough for it to liquefy, then remove a set of wires: Do the same process to remove the other set of wires from the LED. We will no longer need this LED: Next, I cut a few short lengths of new heat shrink tubing and slid a piece down each set of wires: I reattached the orange wires to the short lead of the new LED. Again, just a few seconds of the iron is all that is needed to melt the solder: Then, I did the same to attach the white wires to the longer lead of the new LED. Unfortunately, I held the iron to the solder a little too long here and it stuck my heat shrink tubing to the wires too far down. No worries, as long as one side is insulated, we are OK: When done, we should have two yellow LEDs on the end of the Cable and a red one towards the plug end. I put a 220 Ohm resistor on our battery pack and wired it up to this Cable and everything works! Push the LED at the end of the Cable into this socket at the front edge of the door: Push the next LED of the Cable into this socket at the middle edge of the door: Push the final LED of the Cable into this socket at the rear edge of the door: Now is a good time to see if our new LED looks right: This small modification is so much more realistic! One thing real quick. These two vertical ‘dividers’ inside the door do not allow much room to fit the Cable underneath the gears we are about to install, so I used my Dremel to grind a small notch into each one: Press all of the wiring into the door, then run the plug end of the Cable between these posts and up the channel in the door. Secure the Cable at the posts with the Tab and one (1) AP screw, as shown: Take the thinner small Wheel (gear) 68C and secure it to this post inside the door with one (1) HP screw: Take the thicker small Wheel (gear) 68E and secure it to this post inside the door with one (1) HP screw. The screw head should go down into the recess of the Wheel: Take the Large Wheel (gear) 68D and secure it to this post inside the door with one (1) HP screw. These gears were really easy to spin on my model. If this happens to you, you may find out later that the lower window does not stay ‘rolled’ up. To fix this, I put a thin brass washer under the Large Wheel. I can now use the tightness of the screw to control the friction of the entire gear system: Place the Left Window (Lower) onto the two vertical ‘rails’ so the toothed track aligns with the upper small Wheel.

There is nothing that holds this in place just yet, so it will fall out quite easily. Try not to scratch the clear plastic: It is kind of sad that we have to mod so many things on a $1000+ model to get them right. The soldering work in this issue was one of the more advanced mods we have had to do, and should have been unnecessary. The window rolling up and down is a nice feature, but I am pretty sure I am going to keep it closed anyway. The Left Window (Upper) was not used this time, but it will be needed in the next issue.