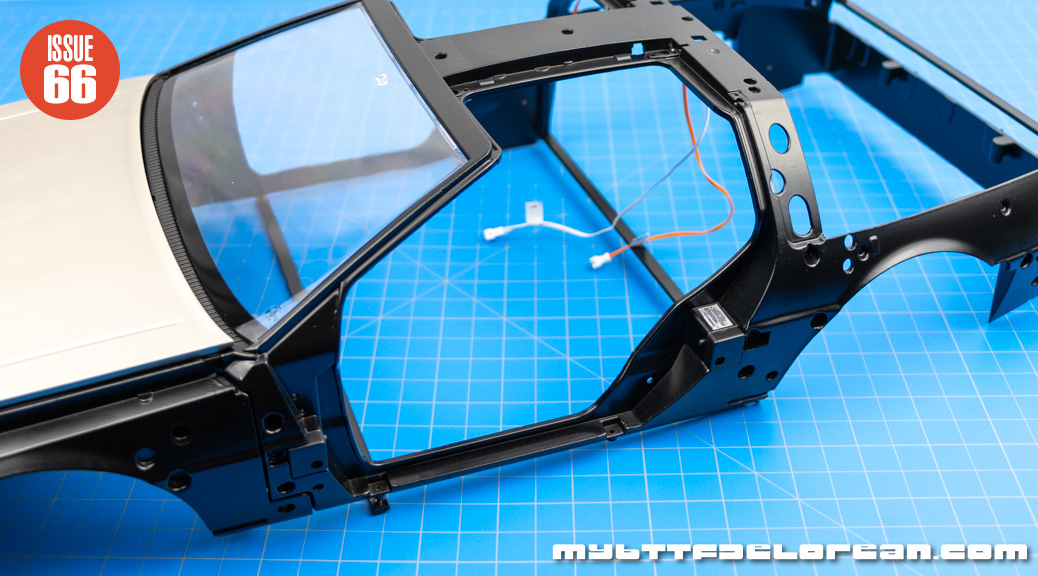 “In this issue you will be working on the upper body. Fit the catches that will secure your DeLorean’s distinctive gullwing doors.” 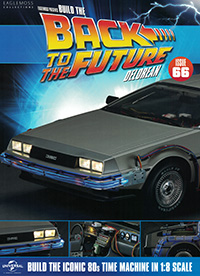 Fit a Spring over the post of each of the four Door Catches: 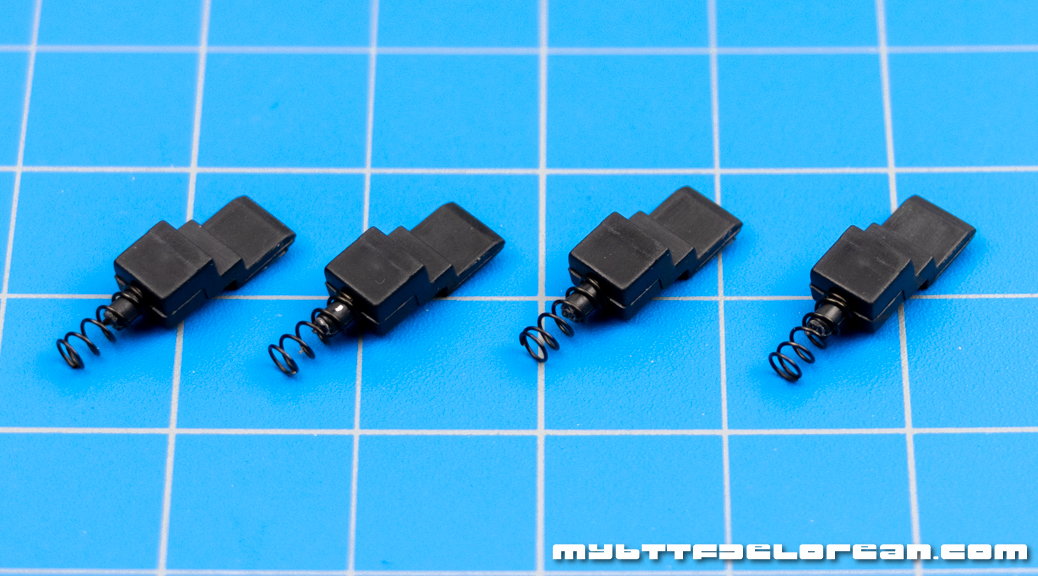 Retrieve the Frame assembly from the previous issue and tape the Hood down so it won’t open up on us during these next steps: 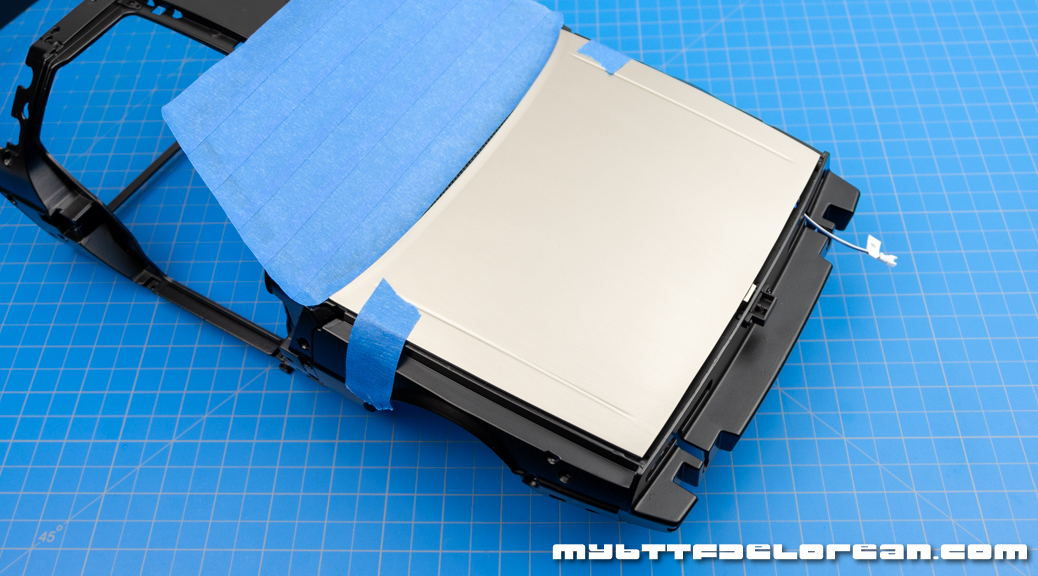 Turn the Frame assembly upside down. In the center section of the roof, fit one of the Spring/Catch assemblies into the matching groove.

These should be inserted with the ledge on the Catch facing up: 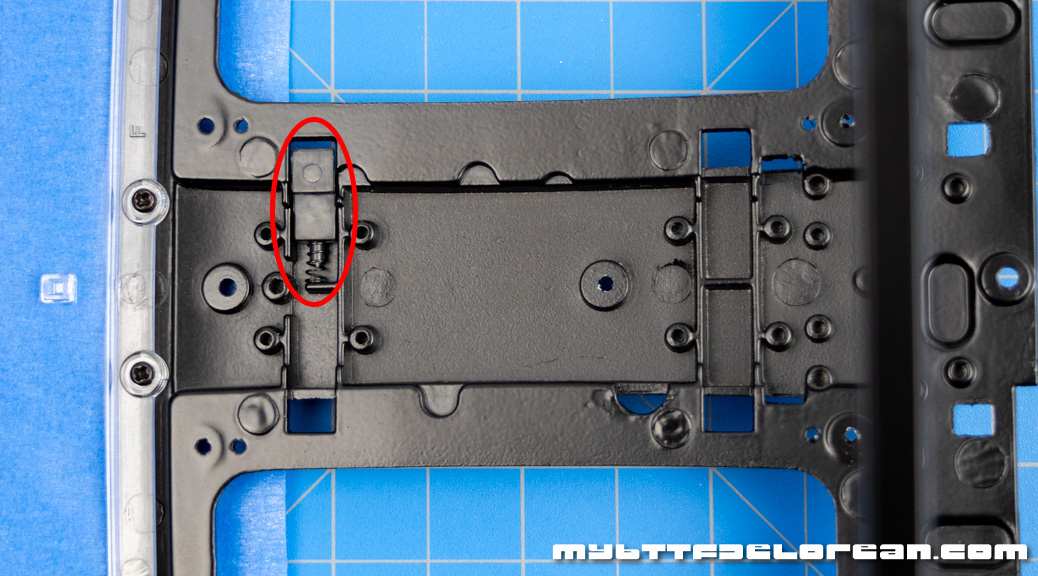 Secure the assembly into place using a larger Tab (66G) and two (2) AM screws. 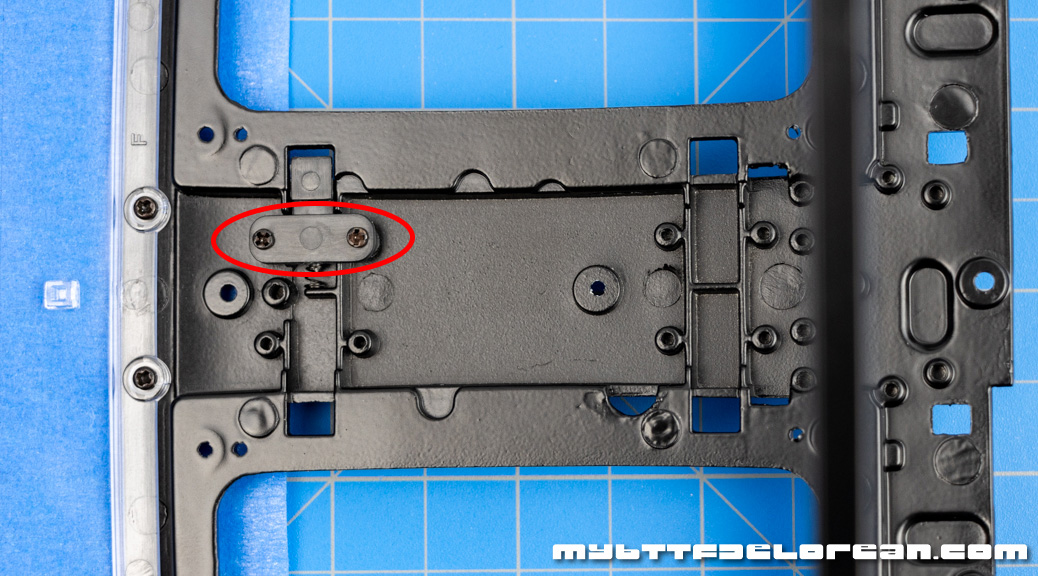 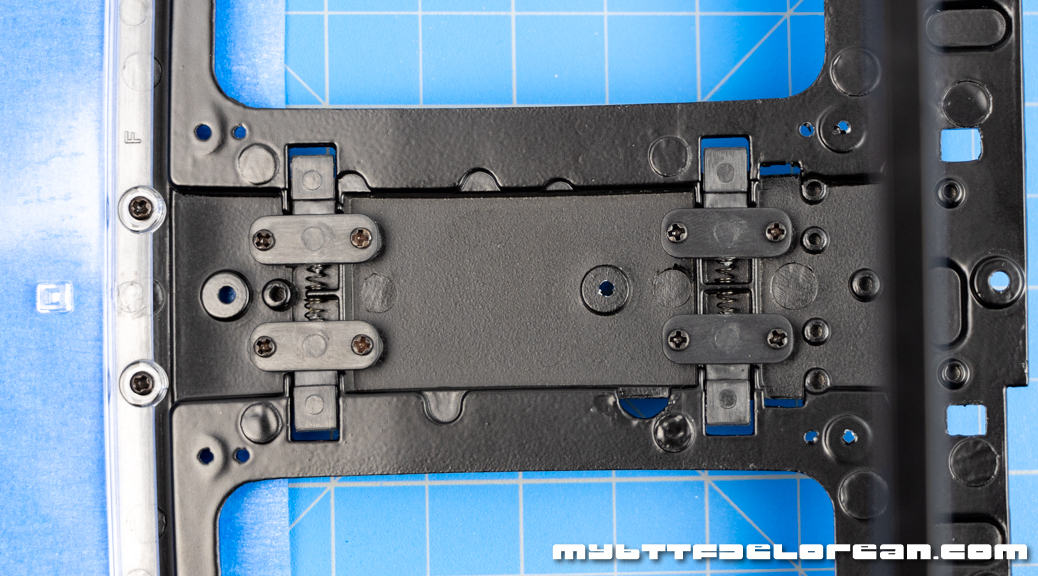 Flip the Frame assembly back upright. Slide one of the Pins into this slot on the driver side at the rear of the door opening.

The square base of these Pins has long edges and short edges. It will only fit in there if one of the short edges is facing out: 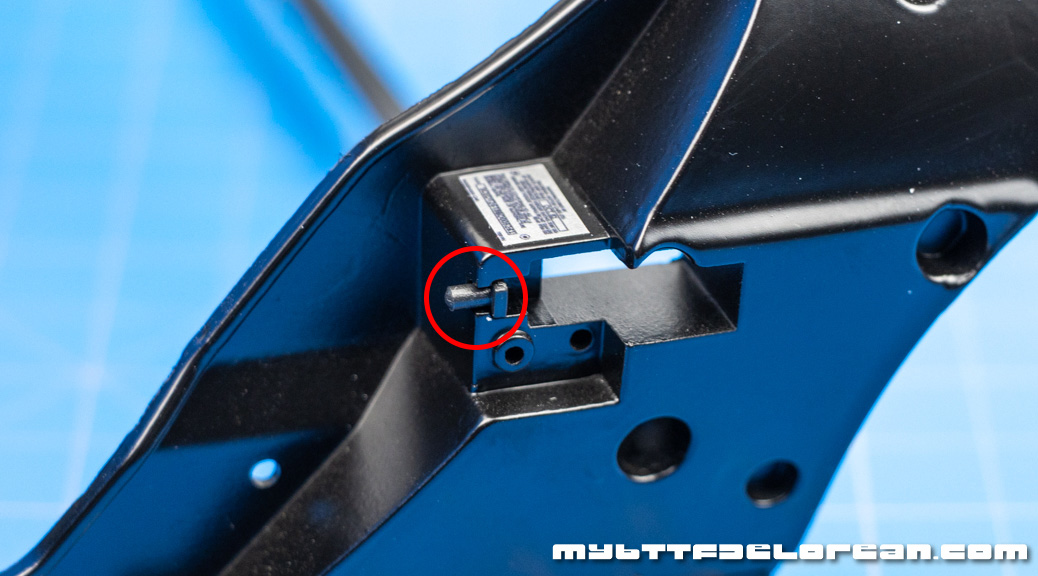 Pass the plug end of the Grey and White Cable (66H) through the opening behind the Pin:

Eaglemoss is color blind. This wire is white/white: 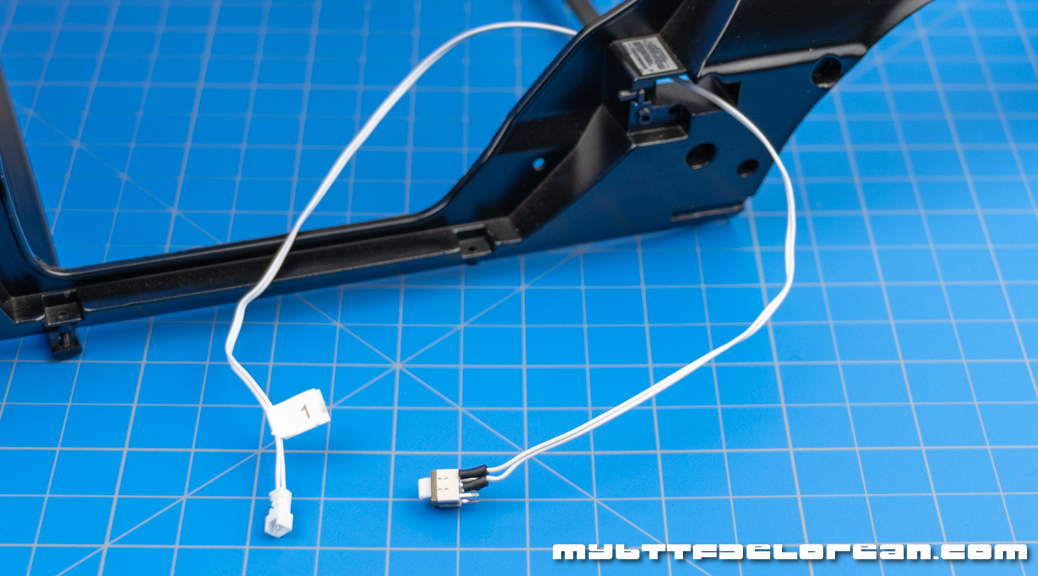 Fit the switch end of the Cable (66H) into the Door Lock Left housing, as shown.

I recommend sliding this switch into the Frame instead (with the wires at the bottom), then install the housing in the next step: 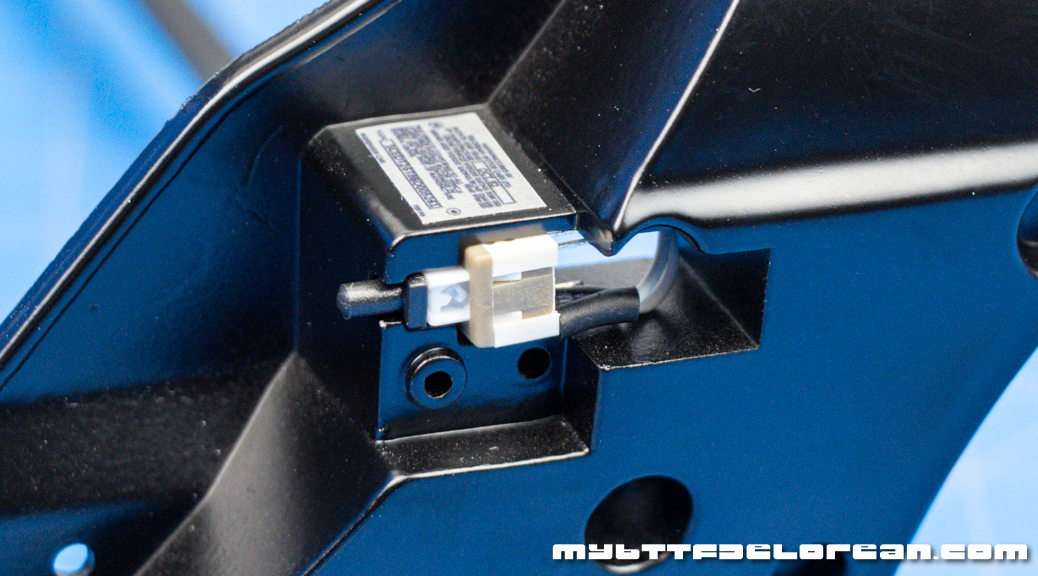 Secure the Door Lock Left housing to the Frame assembly with one (1) AM screw.

This housing will secure the Pin and switch in place: 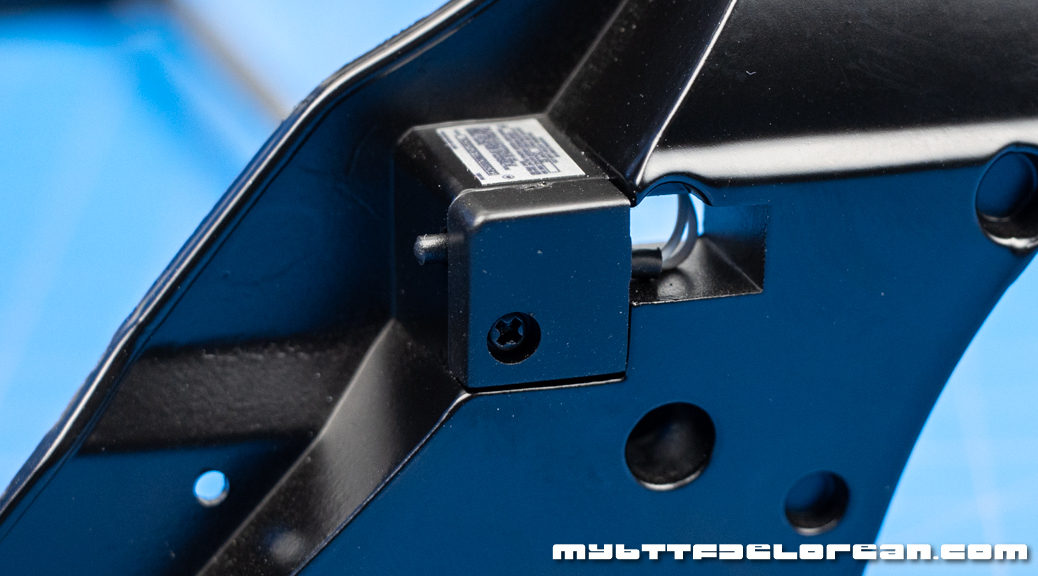 Turn the Frame assembly around and repeat the process on the passenger side. Slide the remaining Pin and switch on the Orange and Brown Cable (66I) into this slot.

Once again, Eaglemoss has the color wrong on the parts list. This wire is orange/orange: 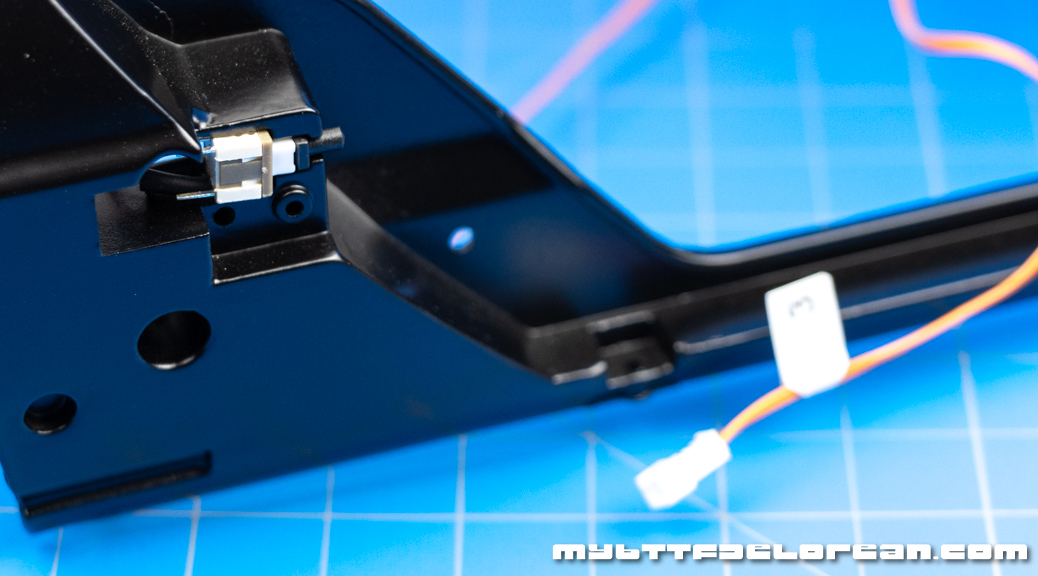 Secure the Door Lock Right housing to the Frame assembly with one (1) AM screw: 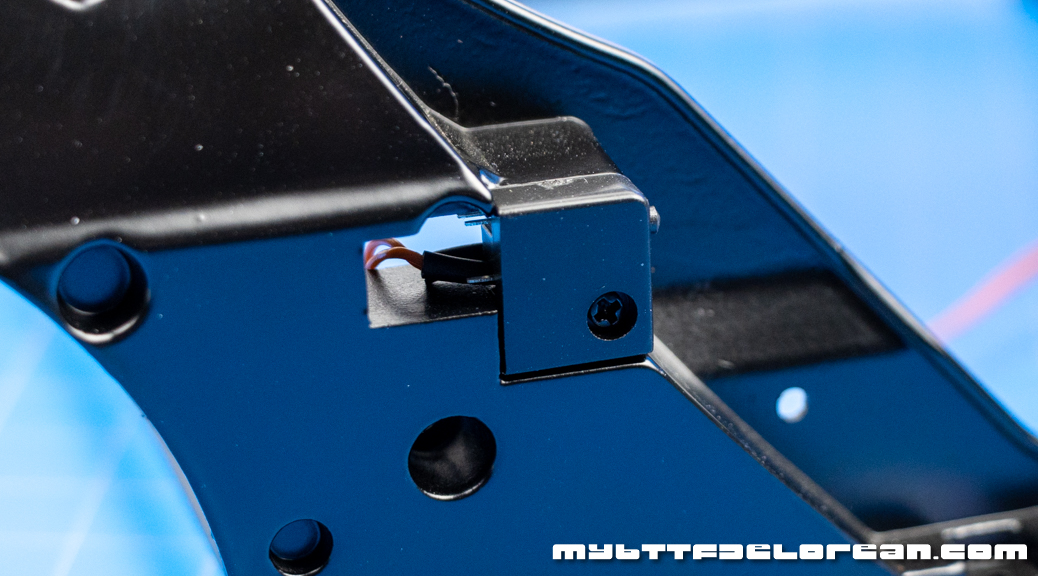 Once the tabs are installed, bend the plug end towards the rear of the car: 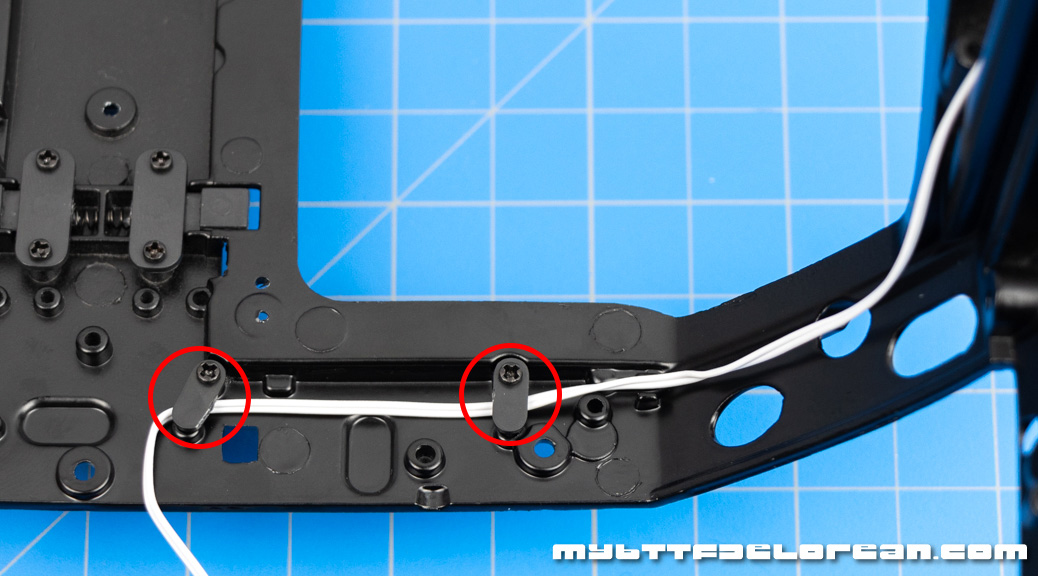 Repeat the previous step with the orange/orange Cable (66I) using two smaller Tabs (66D) and two (2) AM screws.

As before, once the tabs are installed, bend the plug end towards the rear of the car: 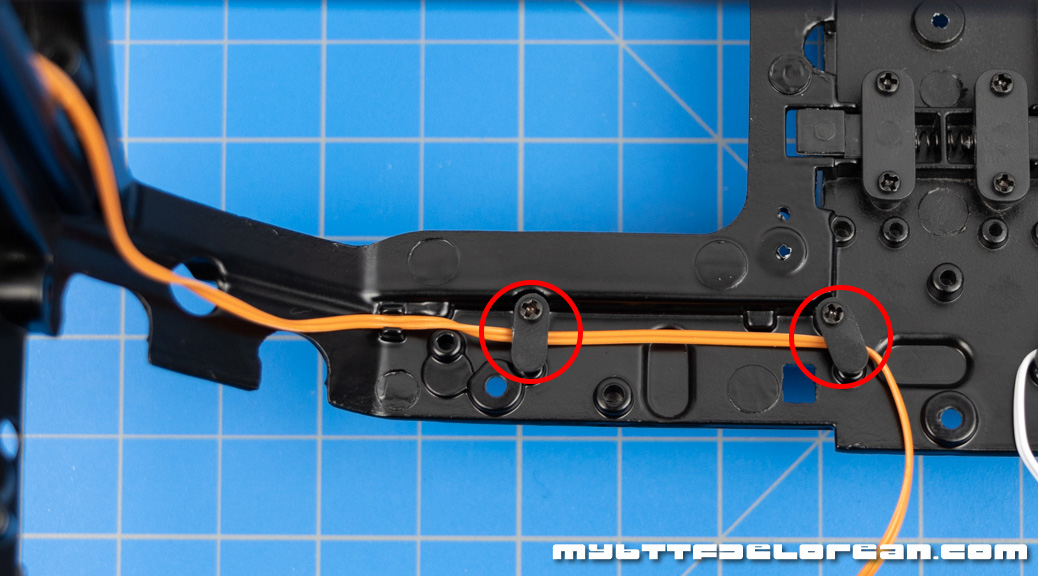 This issue was all about preparing for installation of the upcoming gull wing doors. The Latches in the roof are supposed to hold the doors open (they won’t) and the switches activate the interior/door lights when the doors are opened (they will). Many of these parts are small, so it took a little longer to finish the issue, but I did not encounter any problems.