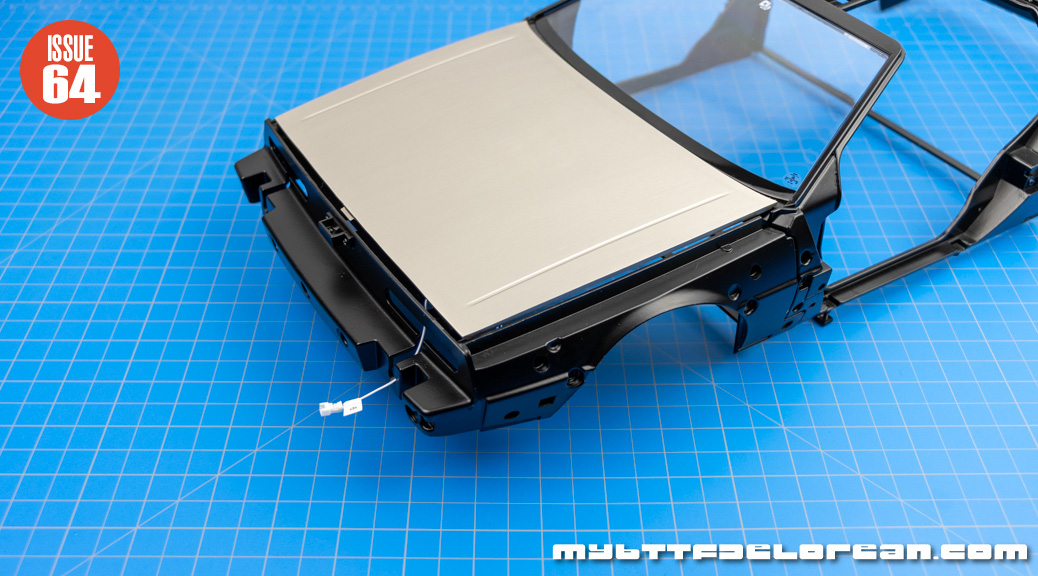 “First complete the hood frame by adding a catch and a light, then fit the hood to the body of your DeLorean.”

Materials: Everything non-electric in this issue is plastic. 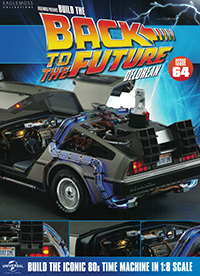 Press the Hood Catch onto these two pins at the edge of the Hood Frame.

The small ledge/post on the side of the Hood Catch should face down towards the pins. No glue was required: 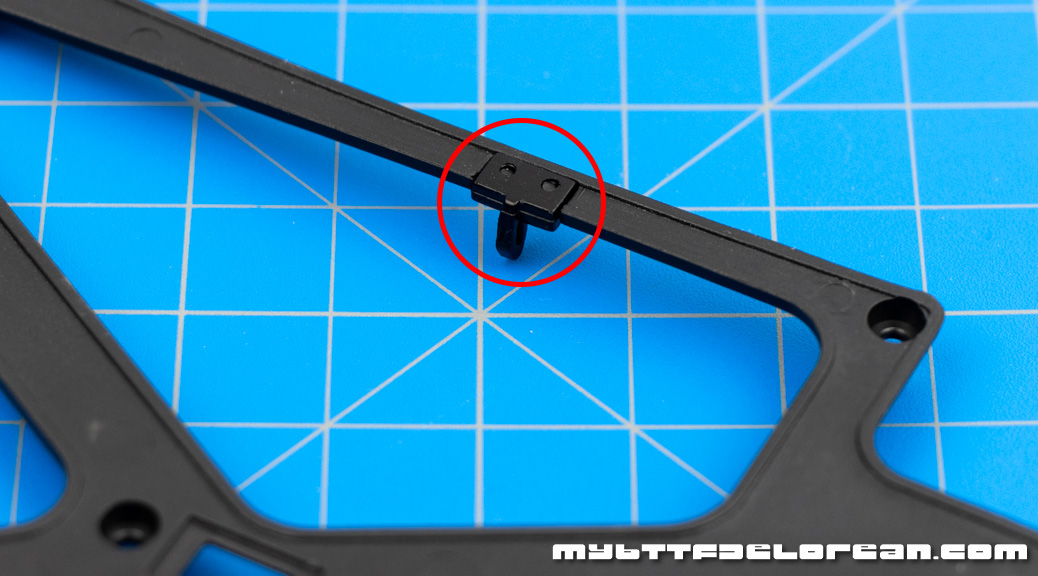 Push the Light into this hole at the center of the Hood Frame.

One side of the Light has a notch cut out of it. This is the side that should face towards the groove in the Hood Frame: 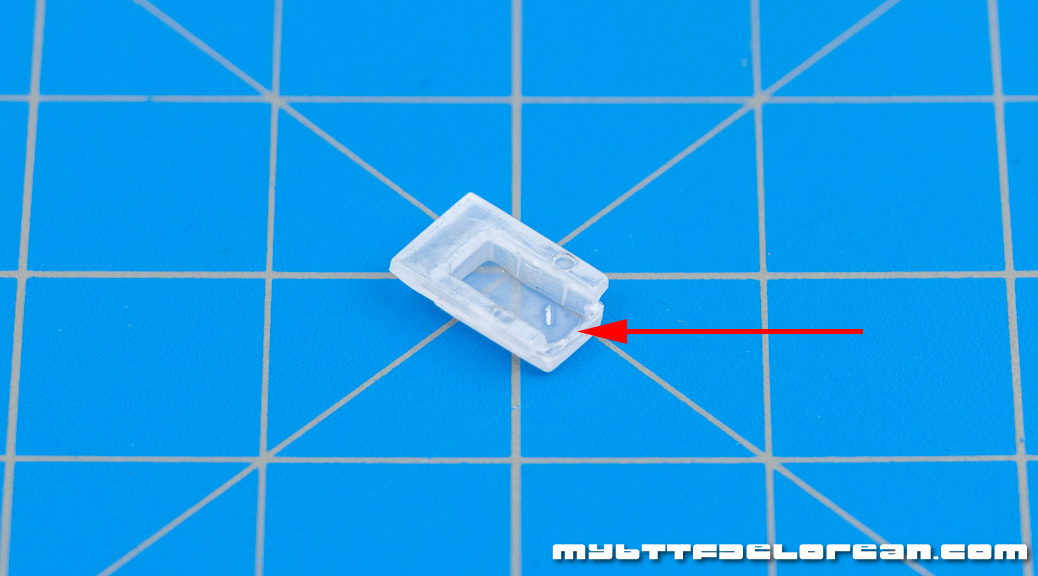 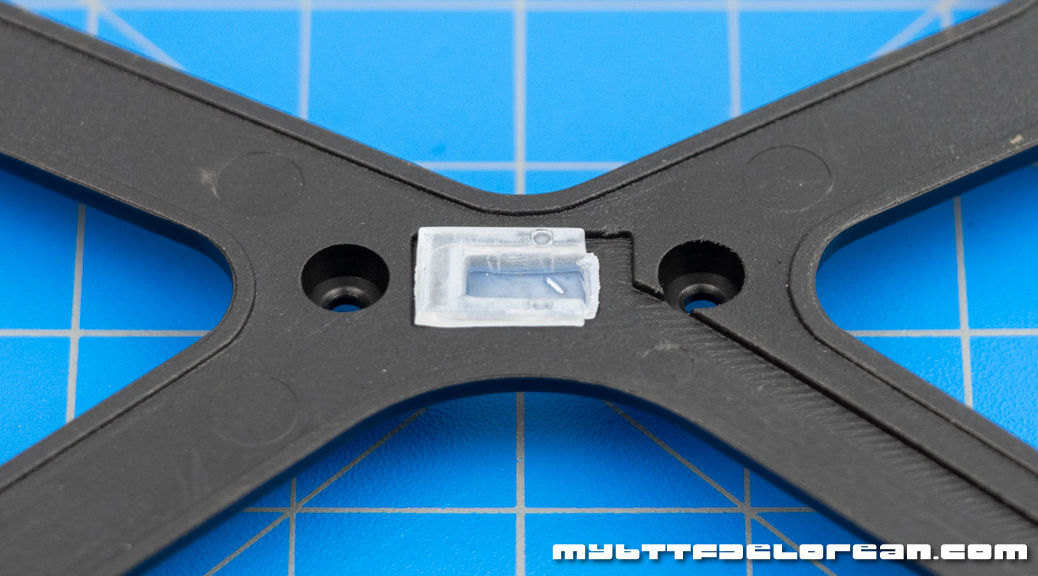 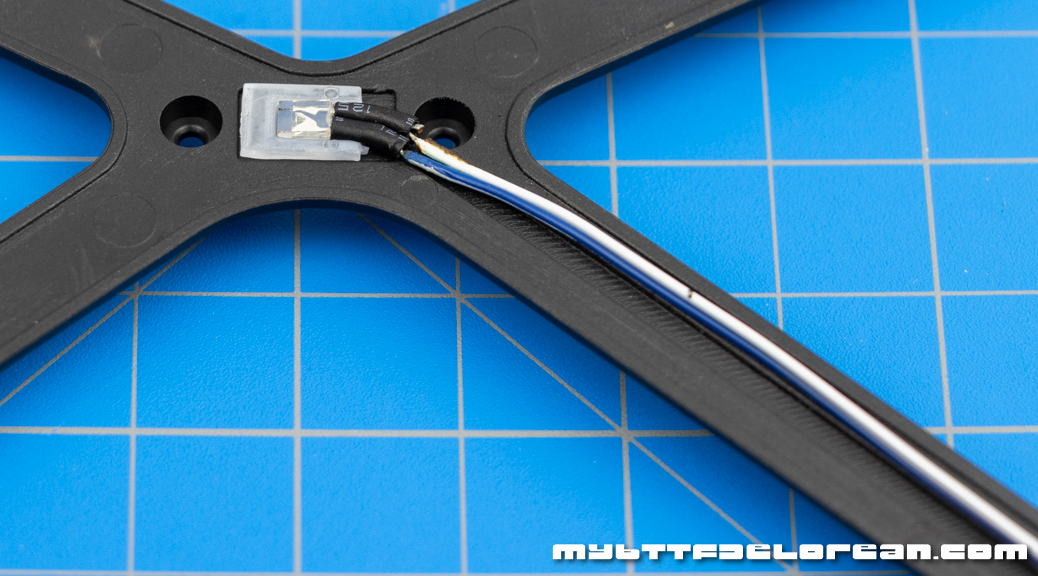 Remove the backing paper from the Adhesive Stickers and use them to secure the LED and wire into the groove.

I used small pieces of black electrical tape here to secure the wire along the channel in a few more locations. It is important that this Cable sits flush in the Hood Frame so it does not cause the Hood Frame to interfere with the closing of the Hood: 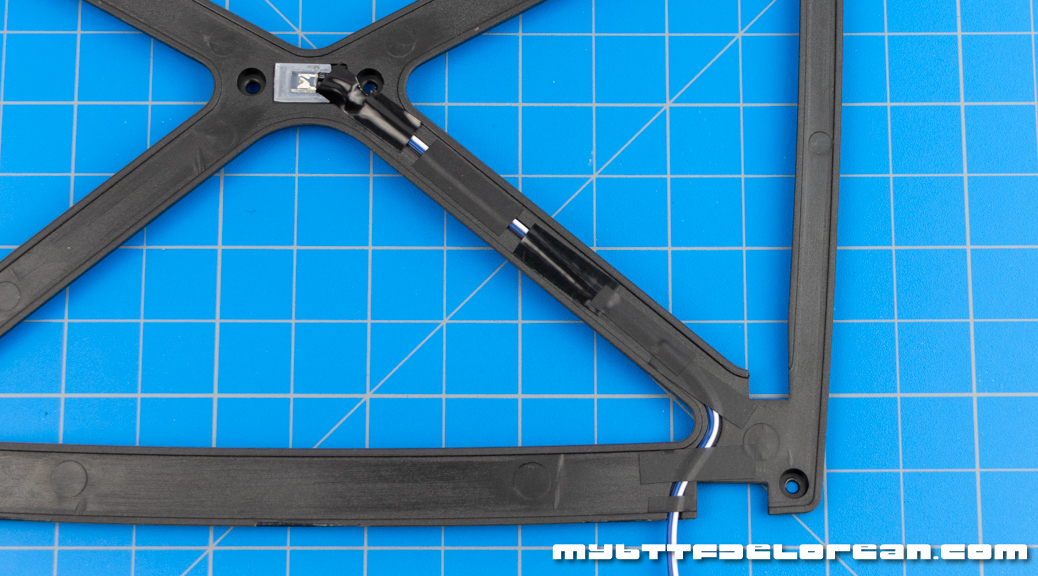 Before we attach the Hood Frame to the Hood, it is a good time to install the upper part of the Bonnet and Luggage Compartment Set from Mike Lane.  This consists of a pre-cut carpeted sheet with a self-adhesive backing. This installation is very similar to the Carpet Set install we have already completed. See that page for more details on how I install carpeting like this. 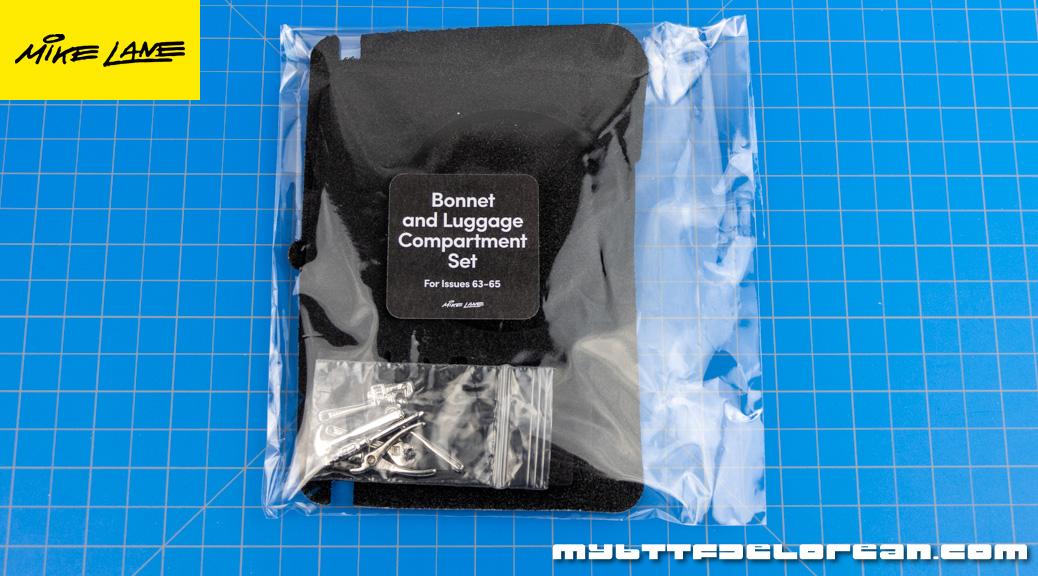 First, I lined up the carpet with the shape of the posts on the underside of the hood and used painter’s tape to temporarily hold the rear and side edges in place: 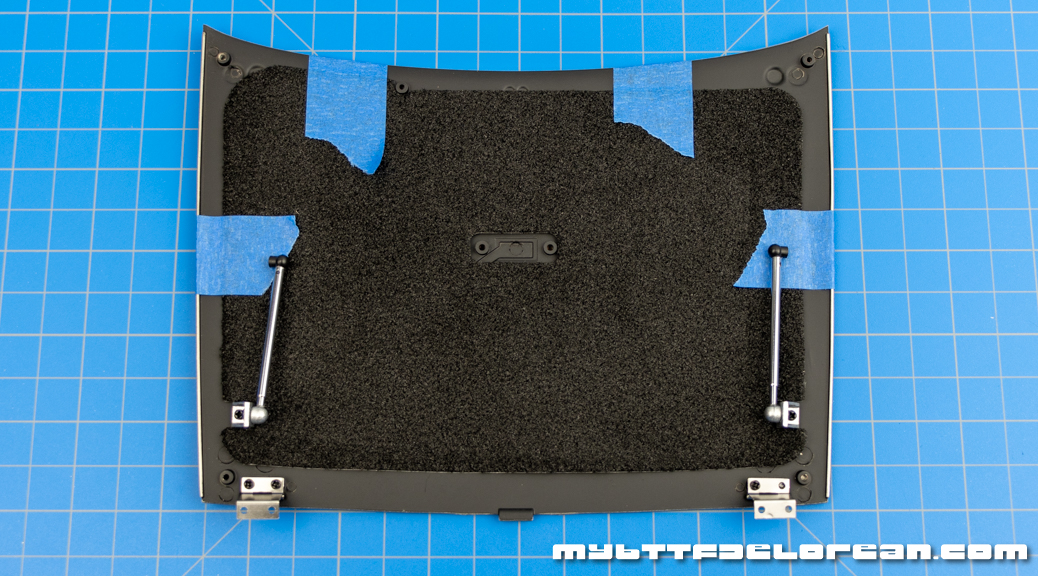 Next, I lifted the front edge of the carpet in order to peel back about 1″ of the backing paper and cut it away: 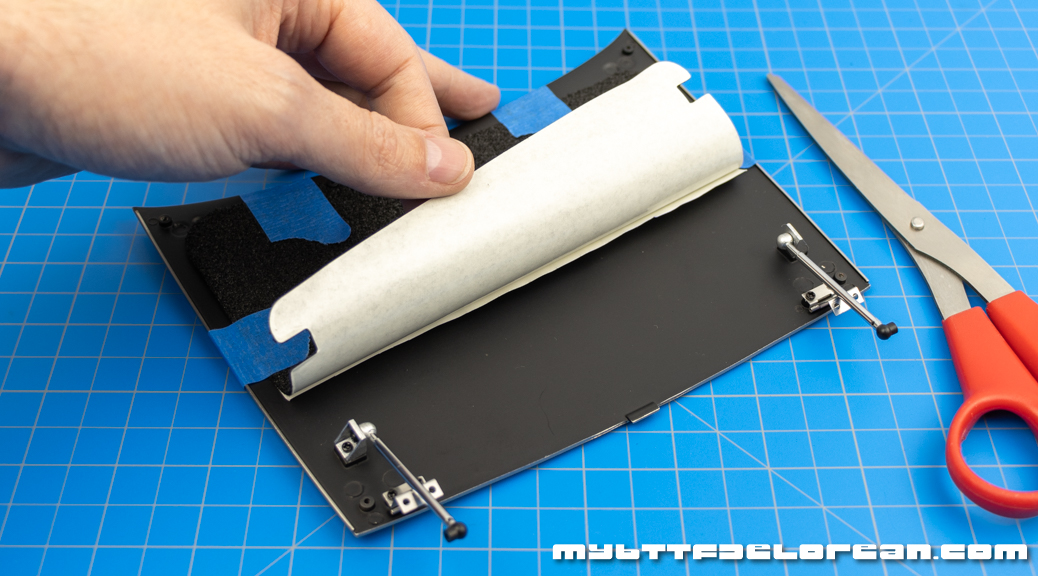 Then, I pressed the front section down into place, making sure it fit between the raised Hood posts correctly. Finally, I removed the painter’s tape and lifted the rear edge of the carpet, removed the remainder of the backing paper, and rolled the rest of the carpet in place. Somehow, I did not take a picture of the carpet installed, but you can see it in the next step.

Retrieve the Hood assembly from the previous issue and turn it over. Fit this Hood Frame assembly to the Hood, aligning the four holes to the posts and passing the Arms up through the Hood Frame.

Note how the edges of Mike Lane’s carpet are now concealed and it looks great! Make sure this Hood Frame seats flush against the Hood around the entire perimeter. This is critical if you want the Hood to sit flush once installed. You may find you have to ‘snap’ it down over the seven mounting posts and around the Arm Supports: 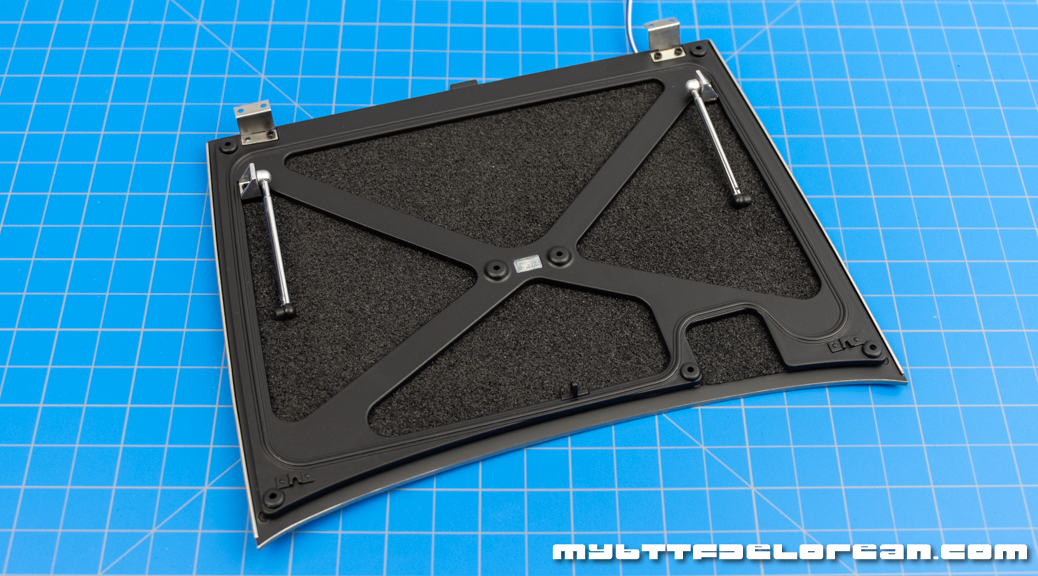 Secure the Hood Frame to the Hood with seven (7) AM screws. 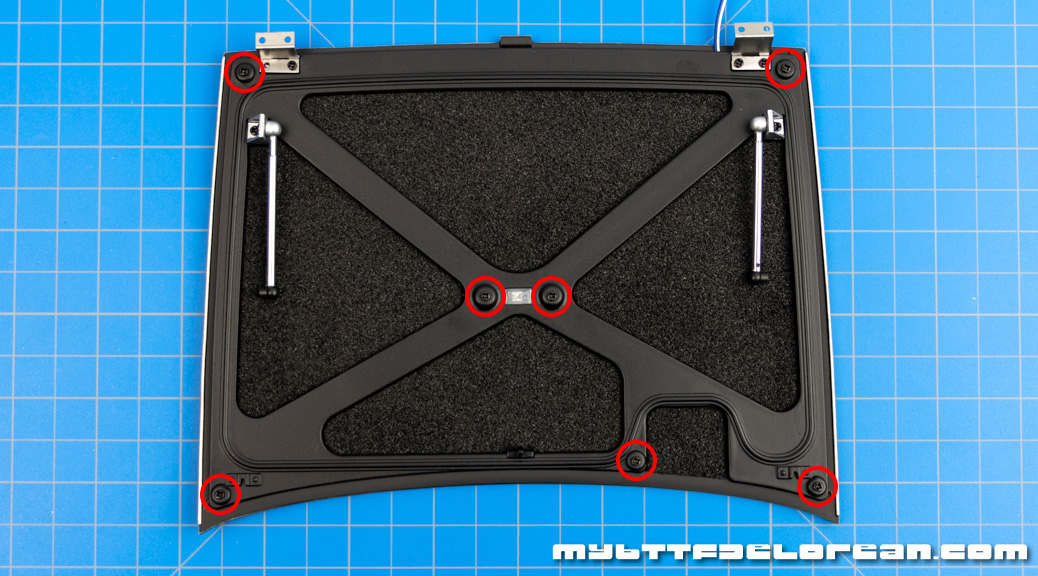 Retrieve the Frame assembly from Issue 61. Fit the Hood assembly down into the frame as shown, slotting the Hinges in at the front. 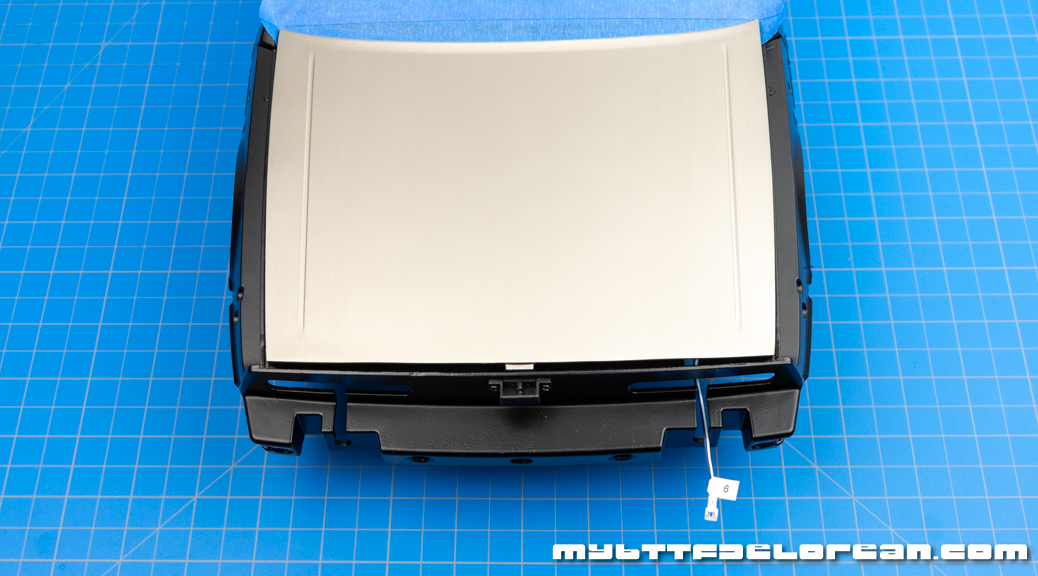 The hood Light wire/plug should fit through the small gap and out to the front of the car through this slot:

At this point, I noticed that the rear edge of my Hood did not sit flush against the base of the windshield, especially on the driver’s side. This appears to be a common problem with this build: 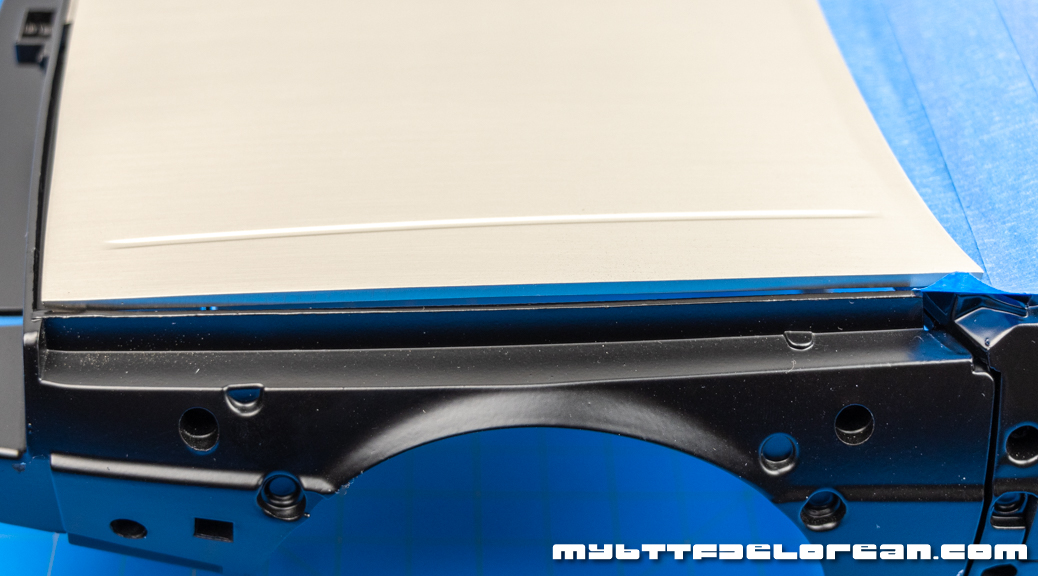 I had to remove the Hood multiple times to gently bend it into the correct shape. It is thick metal, so it took patience and time to get it right, but I did. Once you are satisfied with the position/shape of the Hood, I recommend taping the Hood closed with some more painter’s tape to temporarily keep it from opening itself in the next step: 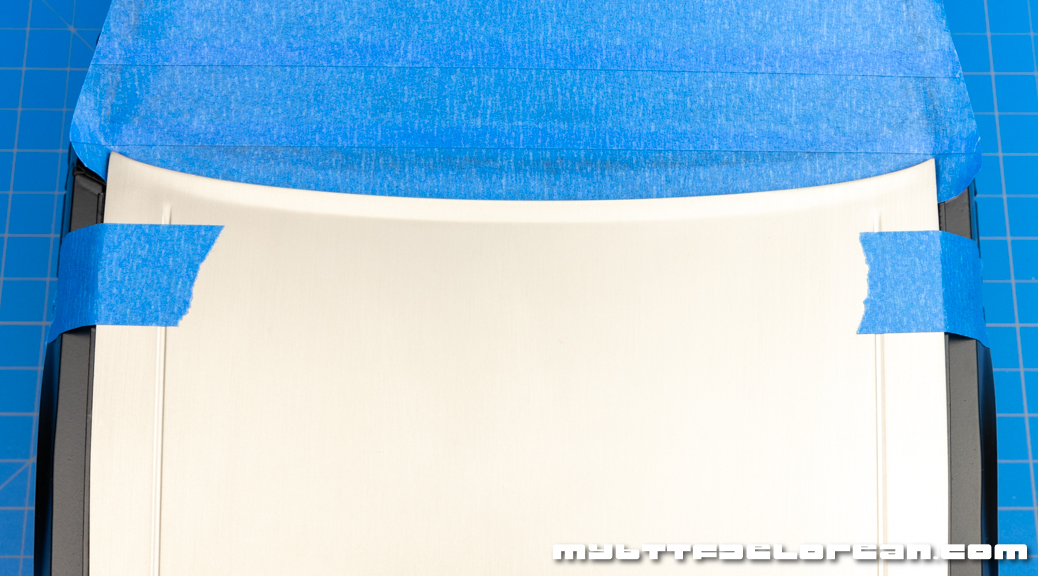 Turn the entire assembly over and secure the Hinges to the frame with four (4) AM screws: 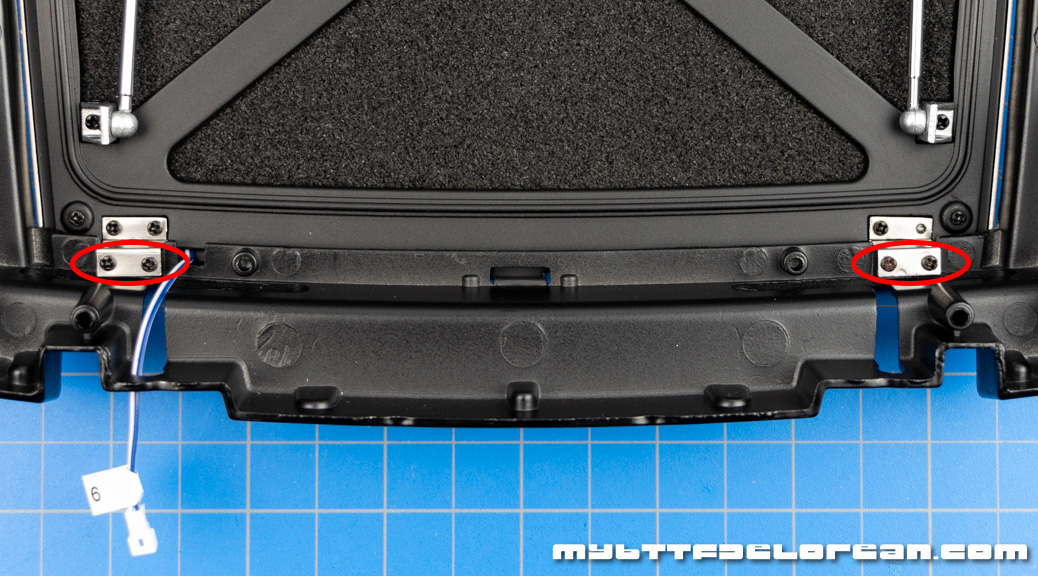 You can now turn the assembly back upright to complete the issue. If you want, you can also remove the tape and open the Hood to see it in action. It should not be opened too far, but you can get a feel for how it operates with the latch and hinges in place.

Just for fun, I grabbed my Driver-Side Wing (Fender) from Issue 02 and temporarily placed it on the frame to get a sneak preview of what this model is going to look like down the road. I think it looks pretty good! 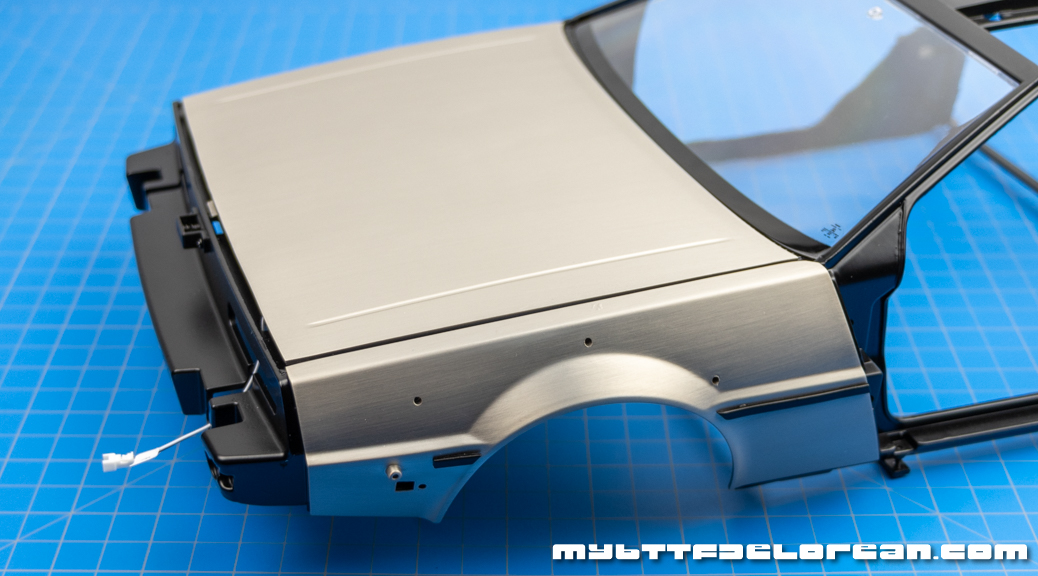 As we attach more parts to this Frame assembly, it is will likely become more difficult to move around. Take extra precautions when handling the frame, especially if any exterior surface could be damaged by your work surface.