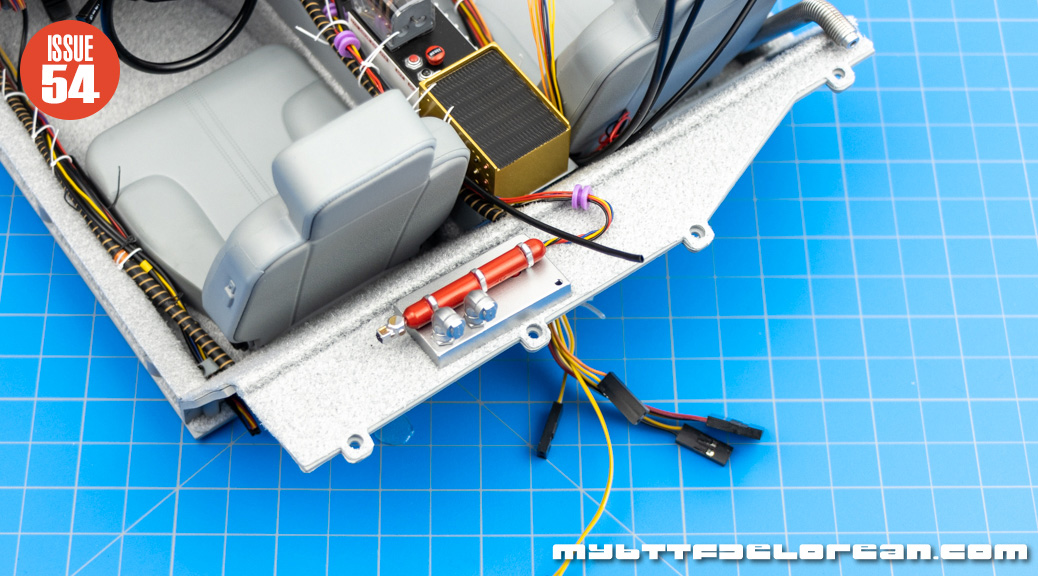 “In this issue you will continue the assembly of the interior by following these step-by-step instructions.”

Materials: Everything in this issue is plastic. Move these others wires out of the way. Separate the five wires in Cables (49F), as shown:

Really, all we need to do here is get these five red/black wires separated so we can work with them: Feed each wire into the appropriate hole of the Junction Box.

On The ‘A’ Car, this Junction Box does not exist: The reason it is included with our partwork build is because it was on Terry Matalas‘ extremely accurate replica DeLorean that Eaglemoss scanned when creating this model. I normally would not include it, but this would leave exposed holes behind the seat, so here we go… Bend the end of each wire behind the Junction Box to hole them in place, as shown.

A little super glue is very helpful here to hold everything in place: Before I started this step, I installed the carpet on the Bulkhead using the Carpet Set from Mike Lane. I have written more detailed instructions on my Carpet Set page. This is the completed result: Bring in the Bulkhead behind the seats, passing the wires from the center console through the notch, and taking note of these two holes: Fit the large and small posts on the Junction Box into those holes in the Bulkhead, as shown: From the back, secure the Junction Box into place using the upper hole and one (1) AP screw: Fit the Bulkhead into place as shown, aligning the four screw holes to the matching holes in the floor:

This is easier if you slide it straight down vertically over the center console from the top: Pay attention to these Cables so they pass through this notch: Also, make sure this silver conduit passes over the Bulkhead and sits in the notch: Turn the assembly over and secure the Bulkhead to the floor with four (4) FP screws: I wanted to add a little color to this Cylinder. In The ‘A’ Car, this is actually a WWII aircraft bail out O2 bottle and has a gauge and some fittings on it: I used my Black Sharpie and my Metallic Gold and Bronze Sharpies to spruce it up a bit: Push the Cylinder into the Base, aligning the pin and pegs to the holes: Turn the Base over and secure the Cylinder to it with two (2) AP screws: Push the two Pipes into the matching holes of the Base.

If we want to be ‘screen accurate’, both of these pipes should face the same way (to the rear):

Unfortunately, when Eaglemoss scanned Terry Matalas’ replica DeLorean for this build, one of these pipes was loose and moved out of place so they included the error in the model: To fix this, I just used a needle file to grind down a flat spot onto the post of one of the Pipes: Now, both Pipes can be installed facing the same way: Secure the Pipes to the Base with two (2) AP screws: Push the connector at the end of these colored wires (from Issue 49) into this recess on the bottom of the Base: Position this assembly onto the Bulkhead behind the driver’s seat, aligning the pin and two holes.

The bundle of wires should now be trapped under the Base: Secure the Base to the Bulkhead from below with two (2) AP screws: If you look at this image of the ‘A’ Car, you will notice there is a locking bulkhead storage compartment and red ball/wire that are missing from our build: Well, as I was finishing the last issues of the car, Mike Lane released his Bulkhead Storage Lid with ‘Bailout’ Ball and Wire mod. It would have been easier to install these around at this point in the build, so I came back here to supply a link to the install and perhaps save others some hassle! I had to make a few modifications to this issue to get the parts to be a little more accurate, but nothing crazy. These little parts really make the interior start to come to life and I appreciate the details in this build.