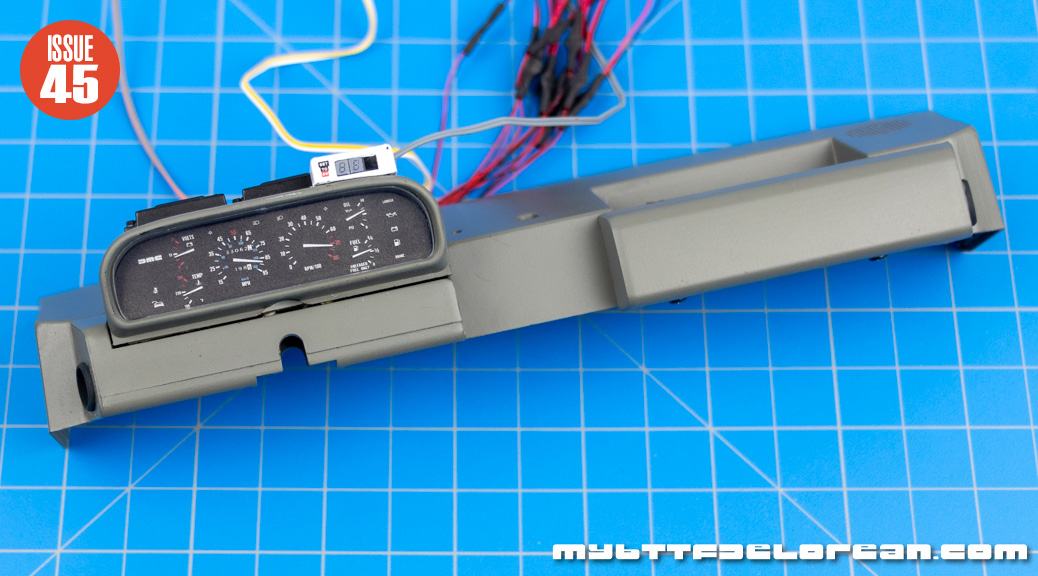 “In this issue, you will assemble the dashboard by following these step-by-step instructions.” 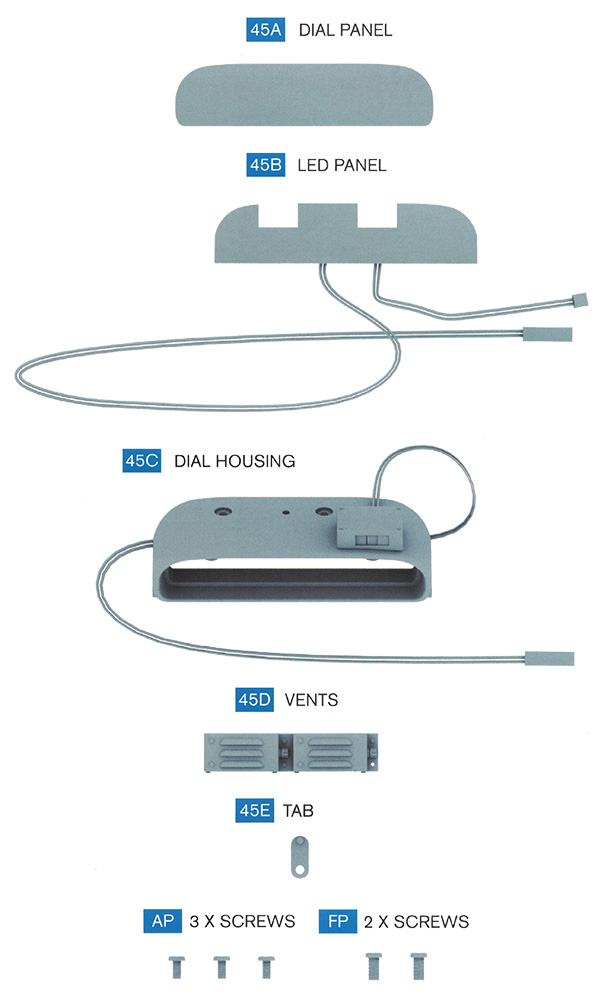 Materials: Everything non-electronic in this issue is plastic. 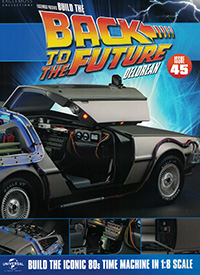 Before we get started, I must say the choice by Eaglemoss to leave the digital speedometer cable as yellow/orange was not great. It should at least be a dull grey. Therefore, I masked off the Dial Housing and airbrushed most of the cable in Tamiya XF-53 Neutral Grey acrylic paint. 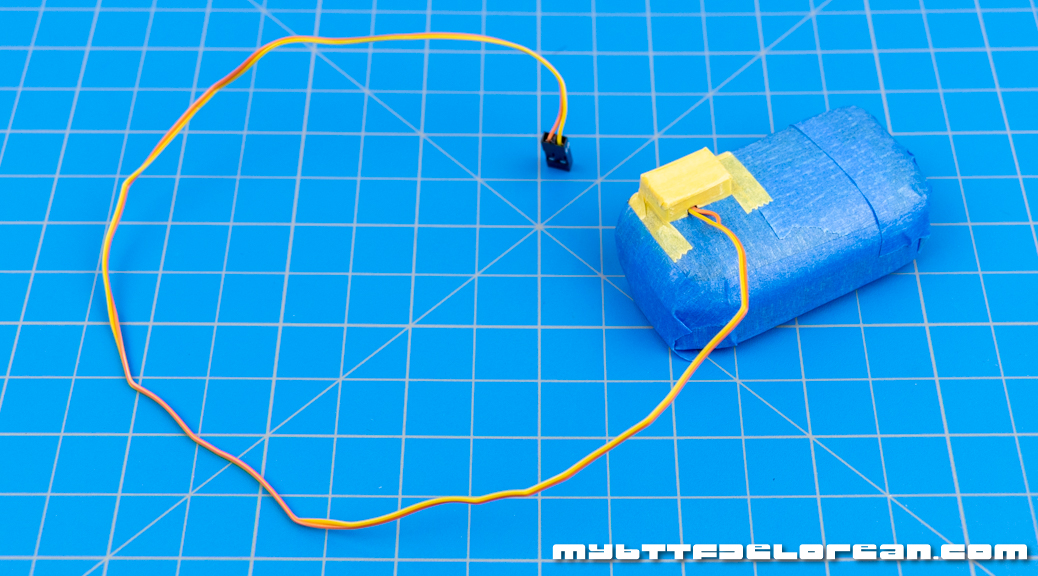 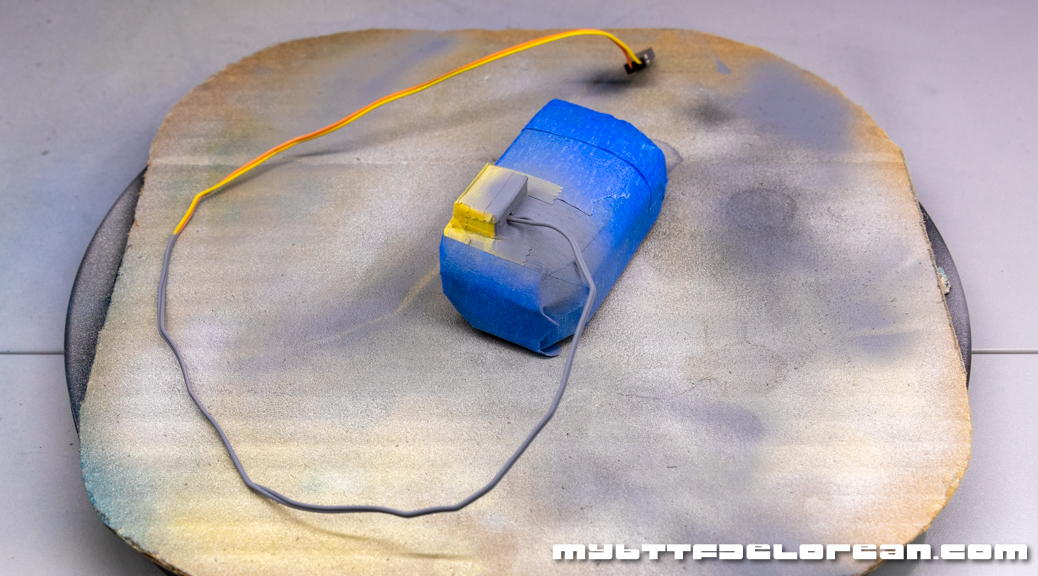 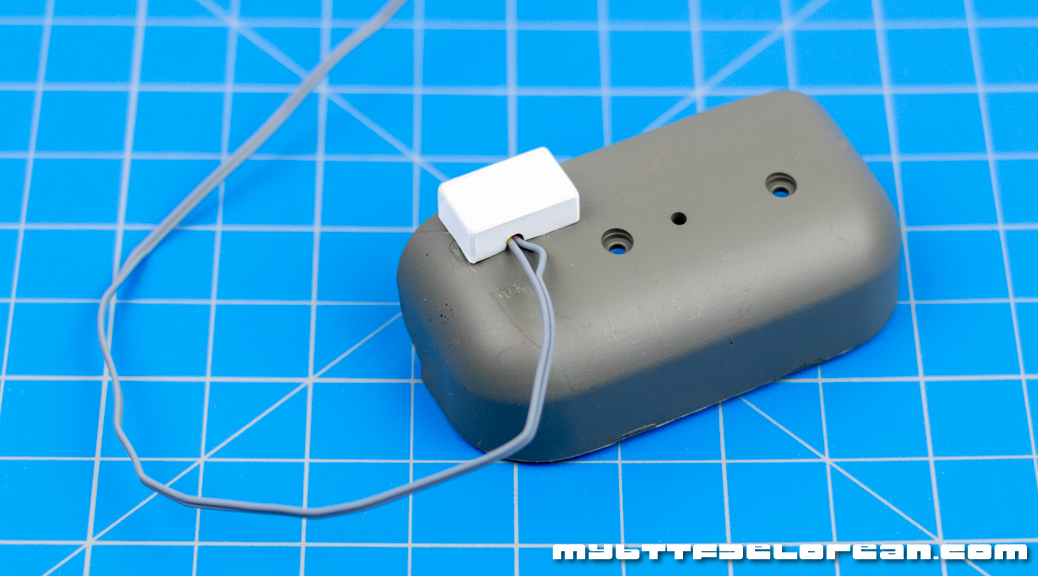 Fun Fact: On The ‘A’ Car, this digital speedometer is just three red 8-segment numeric LED displays inside a Hammond enclosure. In the movies, the producers covered up the third digit (1/10s of MPH) with gaffers tape as they felt it changing so quickly on camera was distracting and unnecessary: 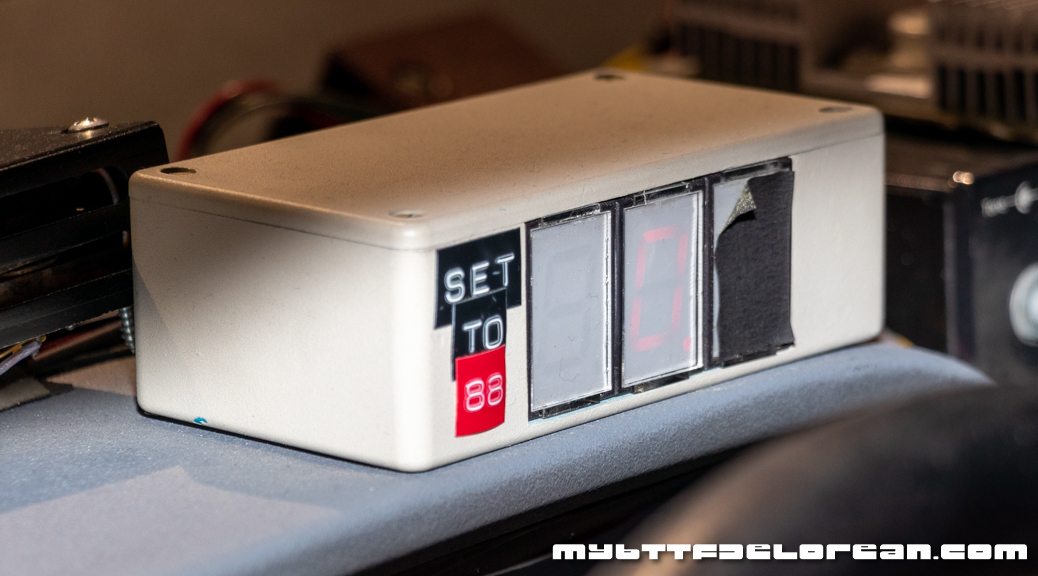 I also used a Metallic Silver Sharpie to add some screw details to the Vents: 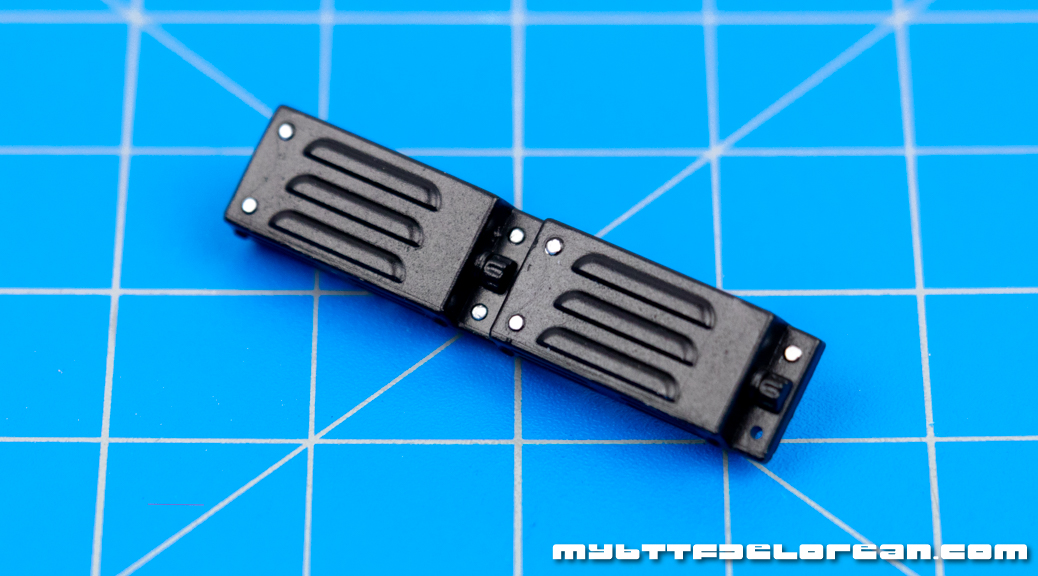 The bottom of the Vents has two posts and a peg. Insert the Vents into the top of the Dial Housing: 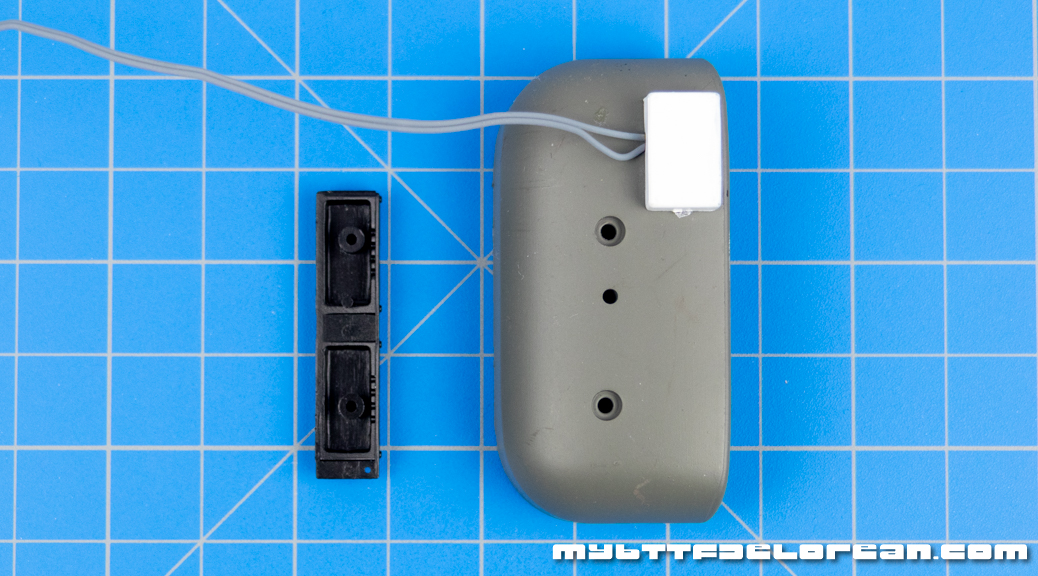 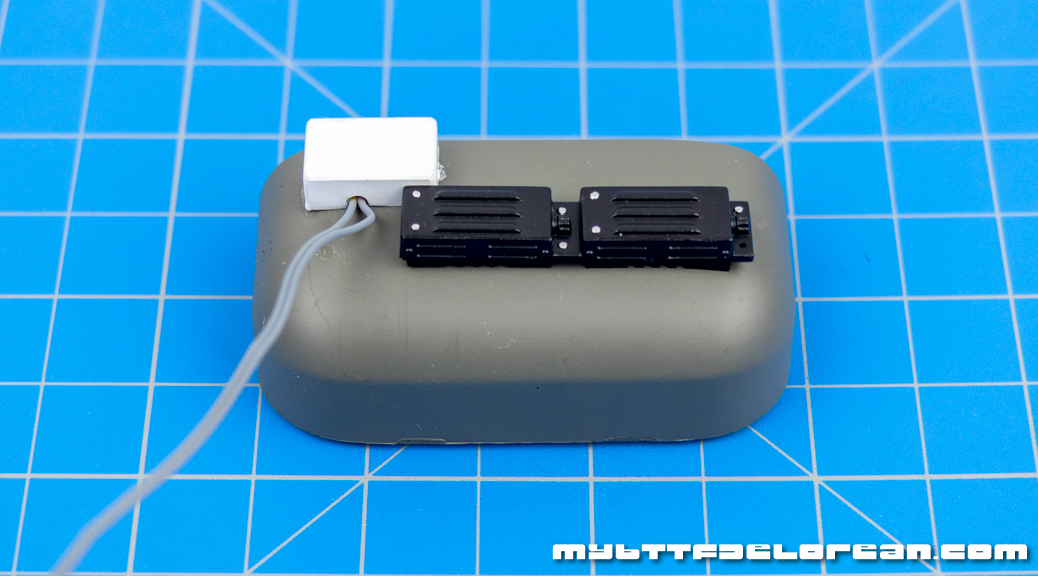 Secure these together from underneath with two (2) AP screws: 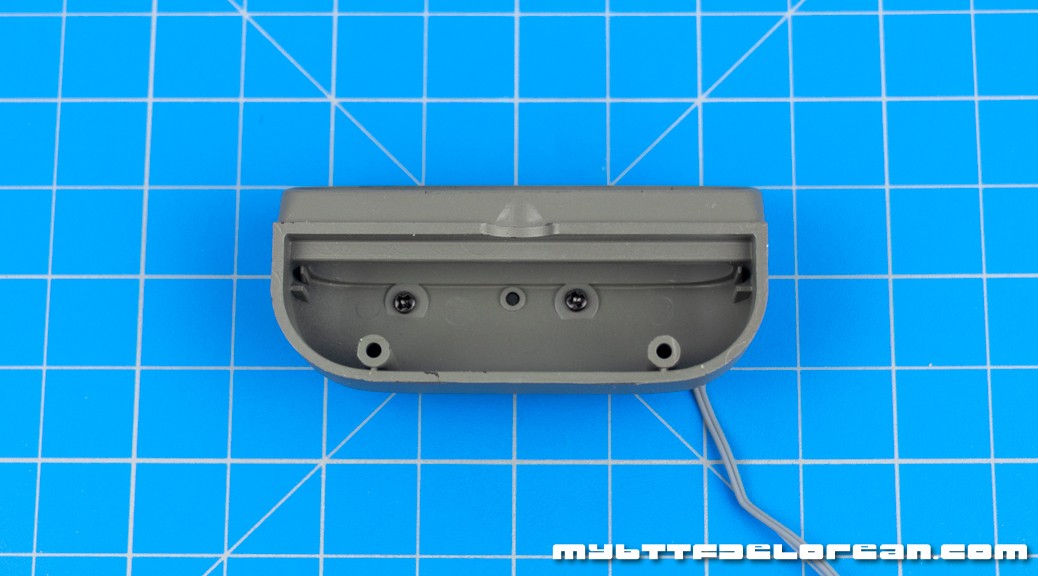 Slide the LED Panel into the slots of the Dial Housing, as shown.

I took a quick moment here to hook up the LED Panel and make sure it worked. It did: 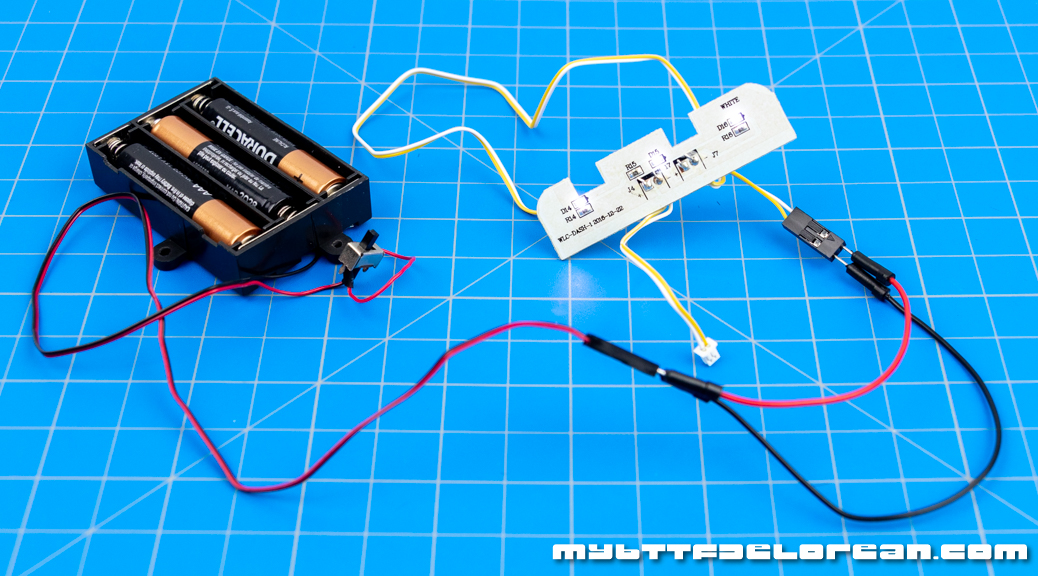 Now we can install it: 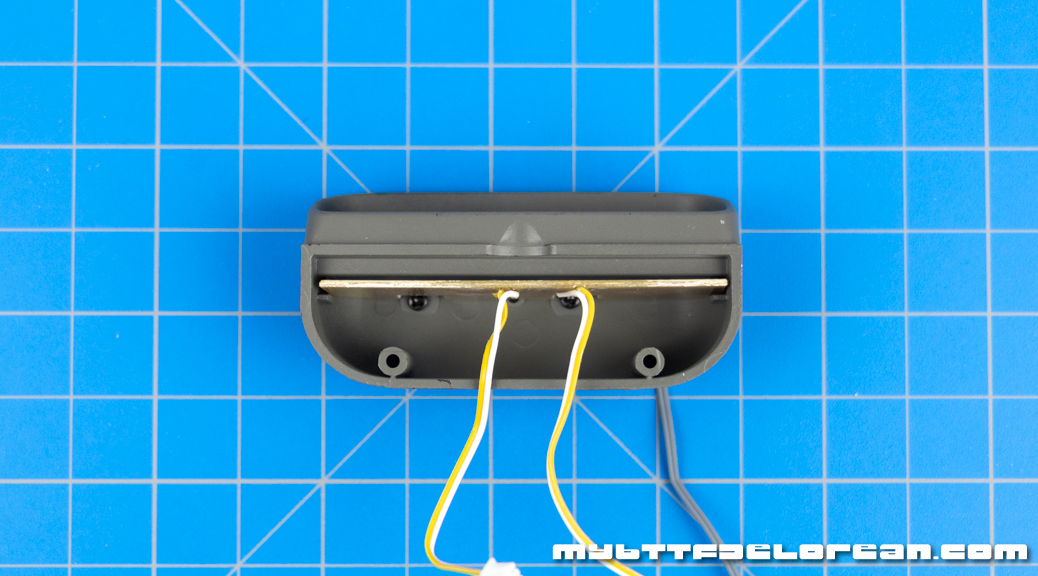 I am going to jump ahead to the guts of Step 10 here and show you what Eaglemoss’s Dial Panel looks like: 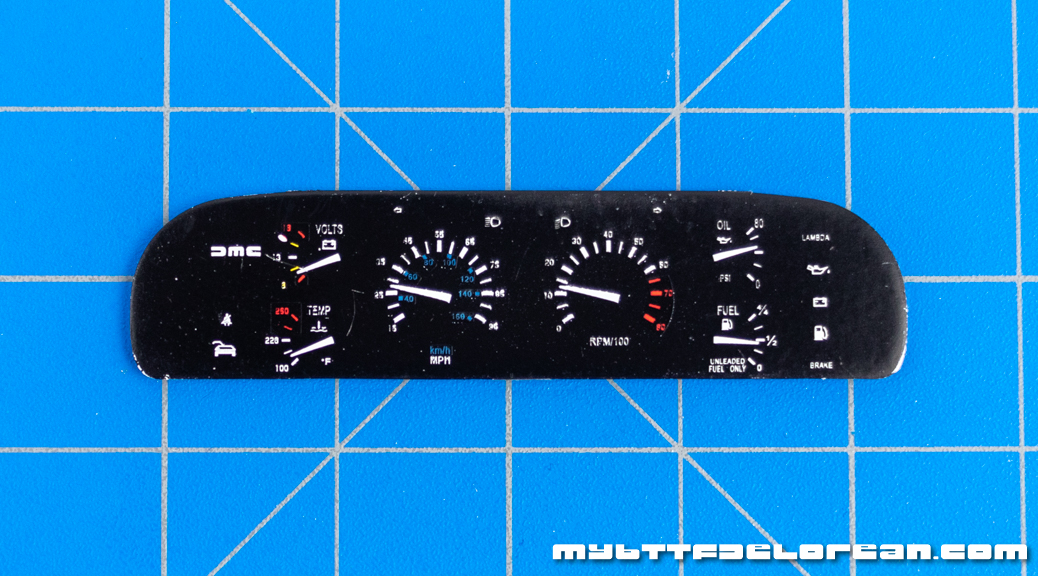 At least they fixed the upside down DMC logo many builders were getting for a long time… But, what’s with the speed they chose to display? Anyway, let’s put it in front of the LEDs to see what it looks like lit up: 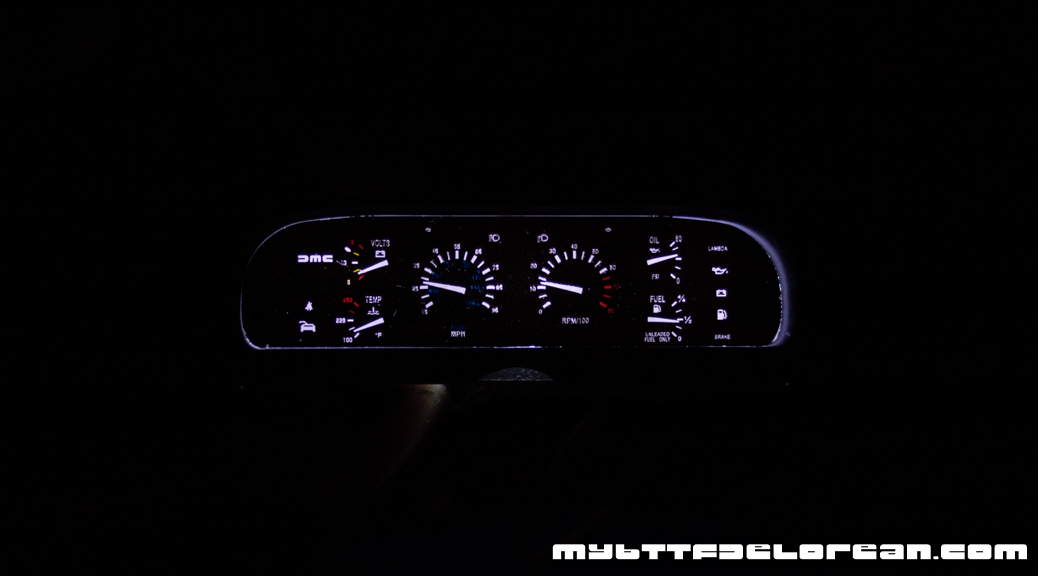 Not terrible, but we can do so much better. Thanks to the electronics talent of Model Modz and the artwork of Mike Lane, we are going to install The Dashboard Mod (88 MPH version). Every single bulb on the dash has its own nano LED and can be lit individually (with an Arduino or similar interface). The first step is to remove the LED panel and feed all the wiring down into the Dial Housing: 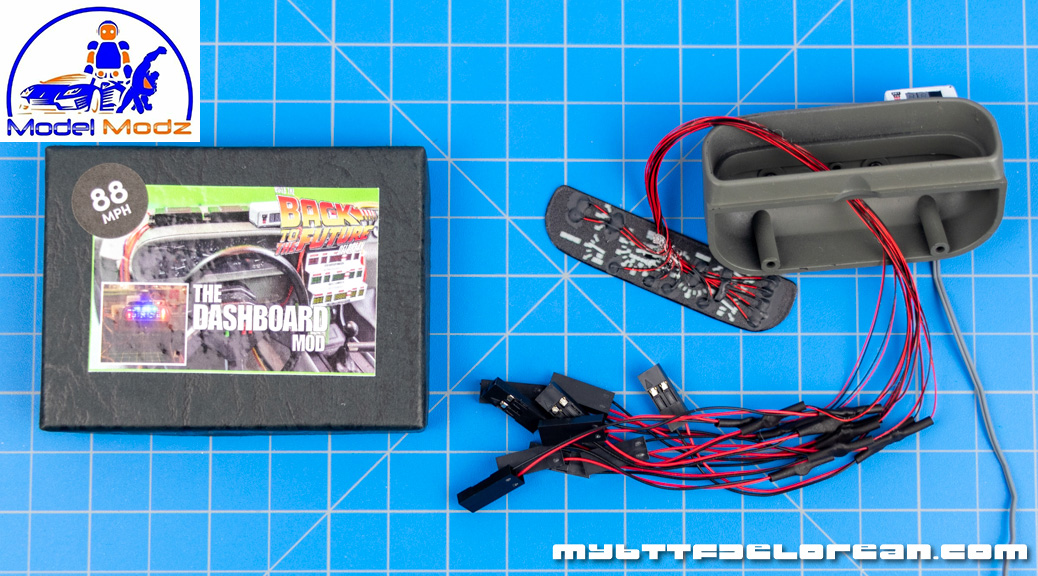 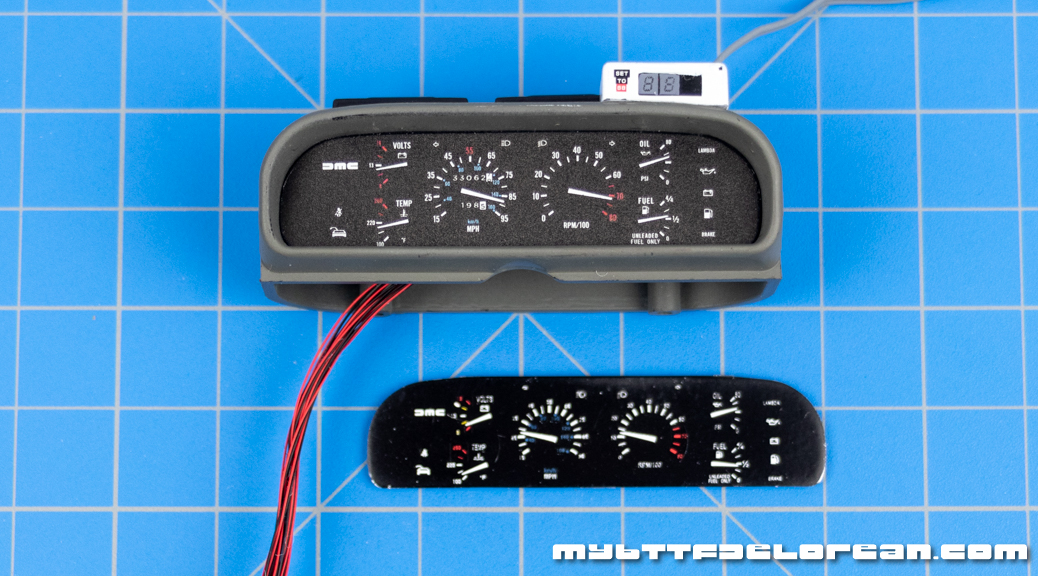 Let’s quickly put the LED Panel back in and see how these new gauges look now lit up: 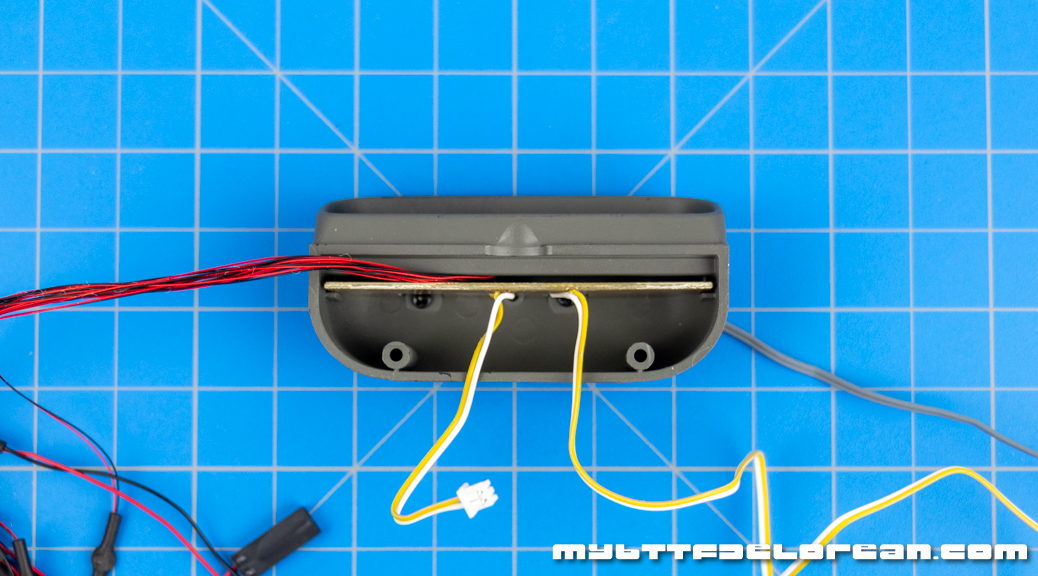 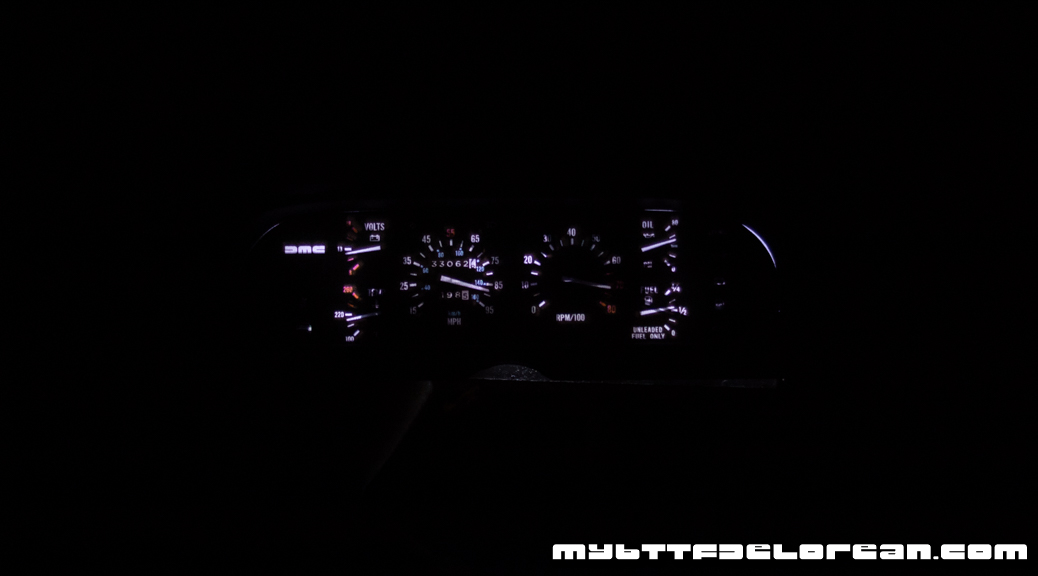 First off, the lighting looks more natural and there is a LOT less light bleed around the edges. I love it! It would have looked even better had I ran the dashboard wiring up and behind the LED Panel (which I did do before I installed it below). This mod also comes with a clear panel to cover the gauge panel, which is definitely more accurate to the real DeLorean. A small pin is included to make a tiny dent in the Dial Housing to hold it in place: 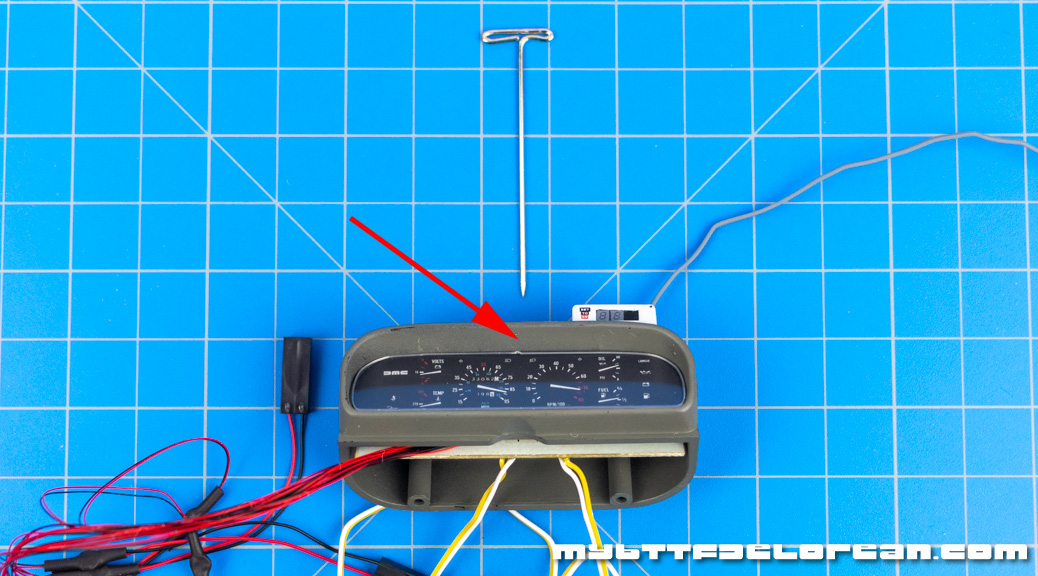 NOTE: The backlighting of both the stock and modded Dial Panel is provided by the Eaglemoss LED Panel and not by the additional red/black wiring. The additional wiring can be used to light every other lamp on the gauge panel such as high beam indicator, turn indicators, warning lights, etc. This requires a separate controller such as an Arudino. Since I am not there quite yet, these wires will be stored in the dash for later.

Feed the Dial Housing cables down through this rectangular hole in the dash.

You can see I have relocated The Dashboard Mod wiring up and through one of the notches in the LED Panel here: 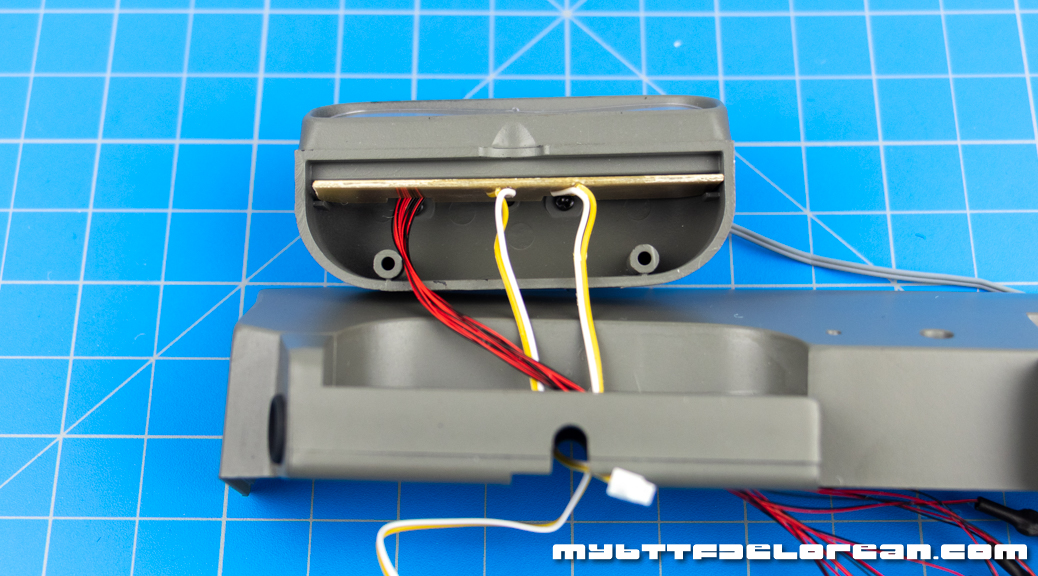 Lower the Dial Housing into the recess of the dashboard and secure from below with two (2) FP screws: 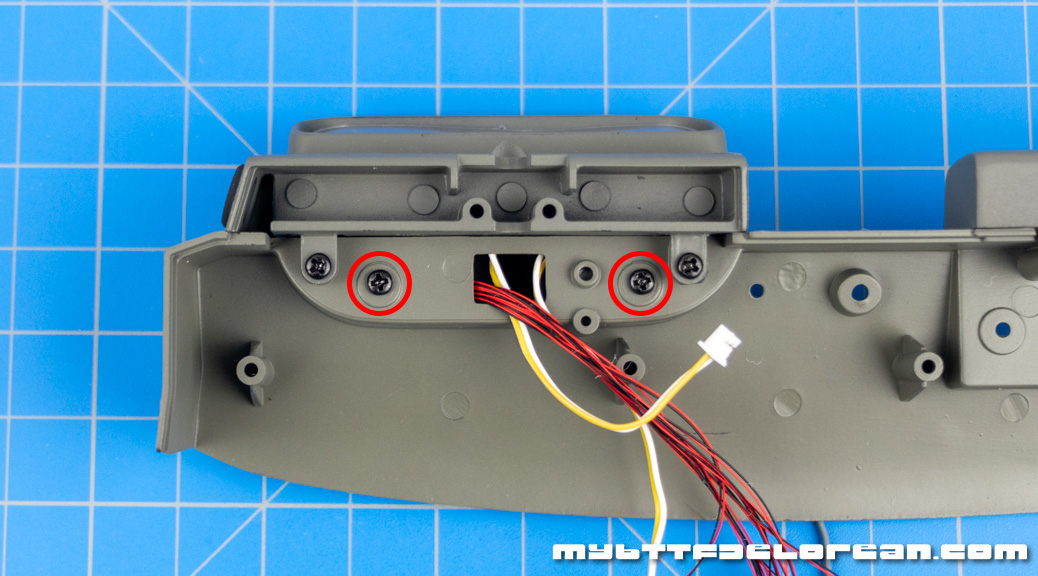 Place the Tab over the yellow/white wires and secure with one (1) AP screw: 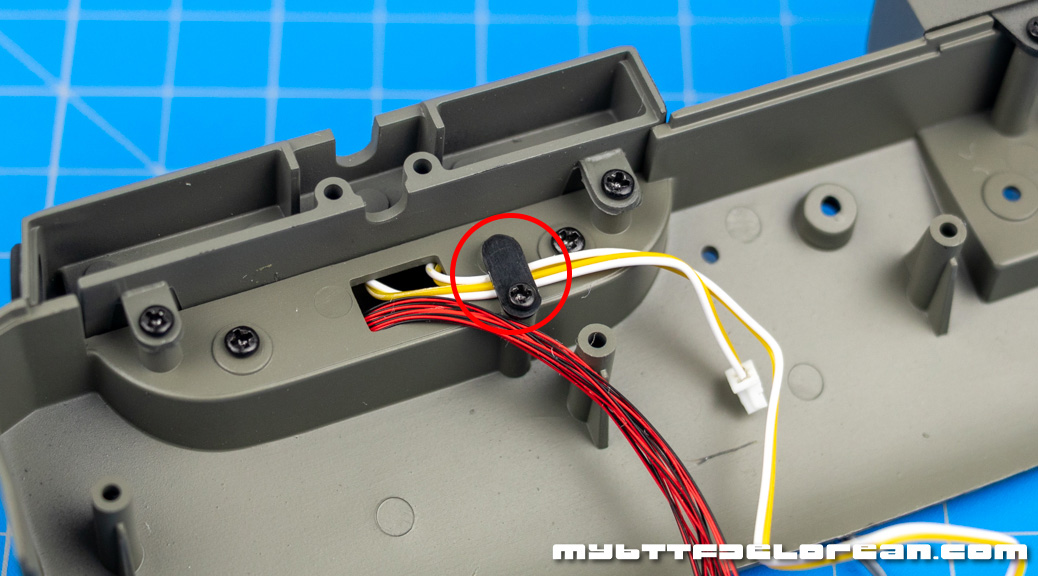 If you are not using The Dashboard Mod, this is the step where you would press the Eaglemoss Dial Panel into place.

Even though this was a short issue, there was quite a bit of modding to make me happy with the results. And, if I ever decide to fully integrate the extra dashboard lamps, I can.