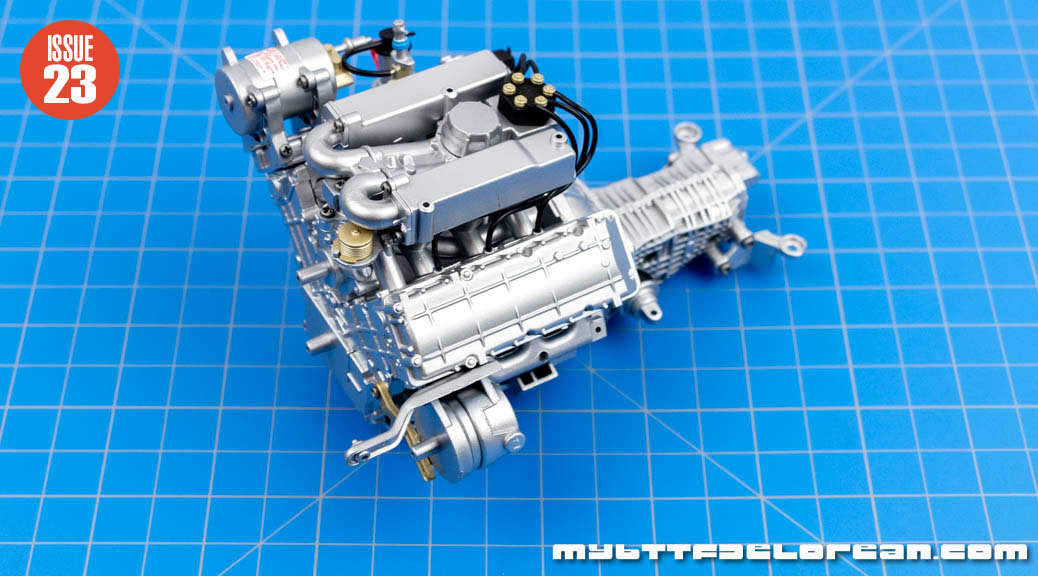 The missing manual transmission mounts have been procured! After waiting almost four months on this back-ordered Issue 23 from Eaglemoss, I ended up going out on my own and buying it from another builder. I was also able to get Eaglemoss to skip this issue and ship me Issues 24-27 so the build can move on. UPDATE: Once I heard that this issue was back in stock, I had to contact Eaglemoss to ‘unskip’ the issue. Then, Eaglemoss shipped my missing subscription Issue 23 along with Issues 32-34. This should put my build back on track.

In this issue, we will be installing those mounts, the alternator, dipstick, and a bracket. By the way, Eaglemoss incorrectly identifies the DeLorean’s alternator as a ‘distributor’. Unfortunately, Eaglemoss does not include the engine’s actual distributor or spark plug wires with the build. 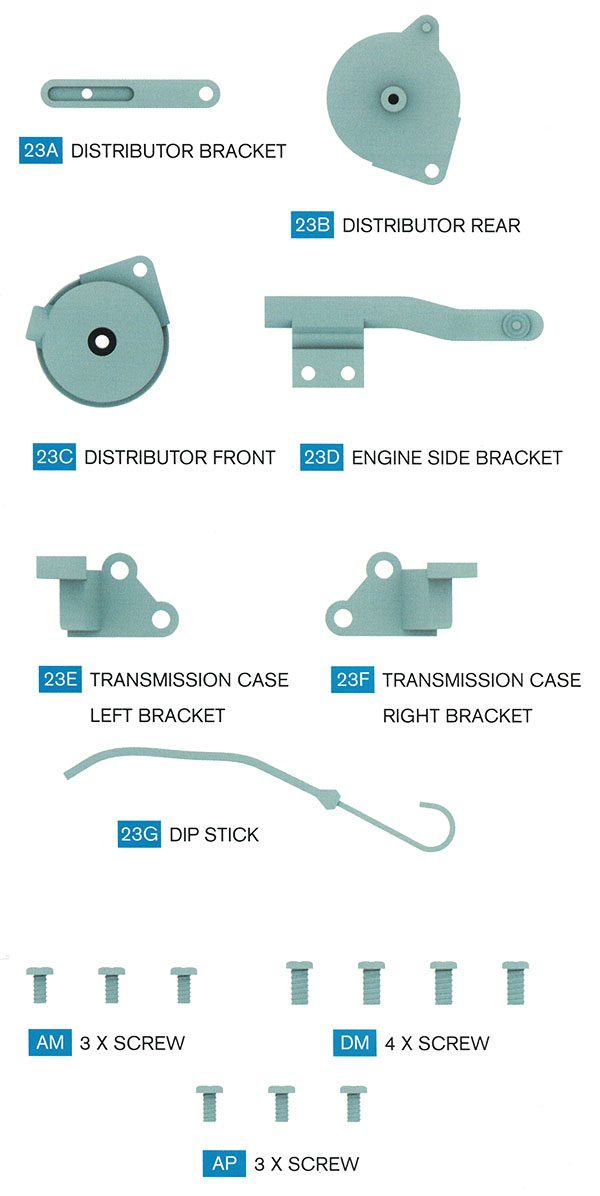 Materials: The only metal parts are the Transmission Case Brackets, everything else is plastic. 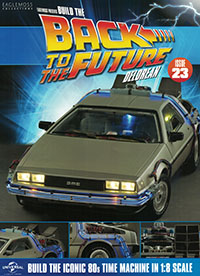 As before, I painted the heads of all exposed chassis screws with Tamiya XF-56 Metallic Grey in advance. I also shot the Distributor Bracket (Alternator Bracket) in Model Master Acrylic 4672 Brass paint just for some contrasting color: 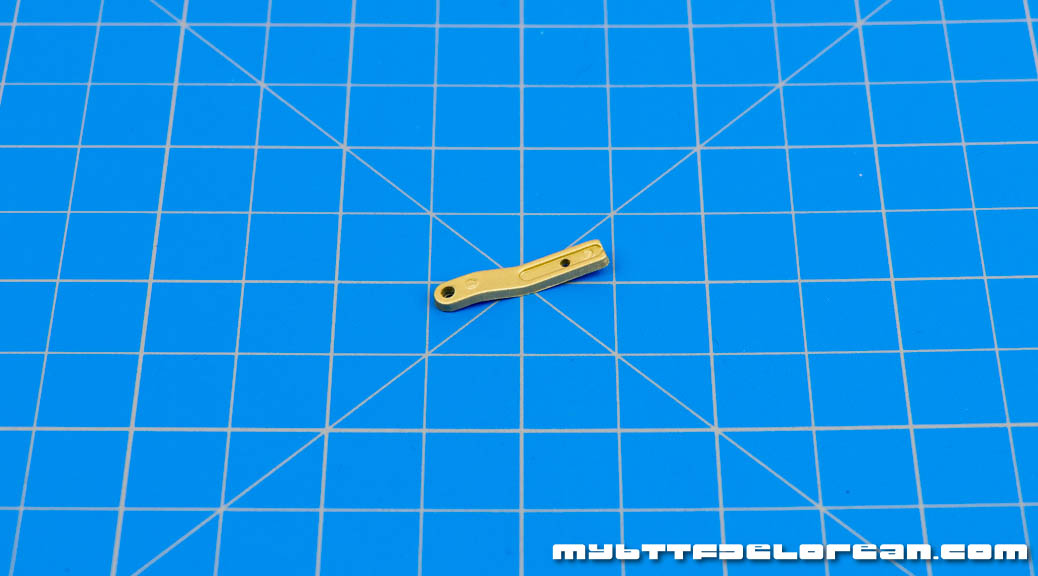 Place the Engine Side Bracket against the right side of the engine and secure with two (2) AM screws. 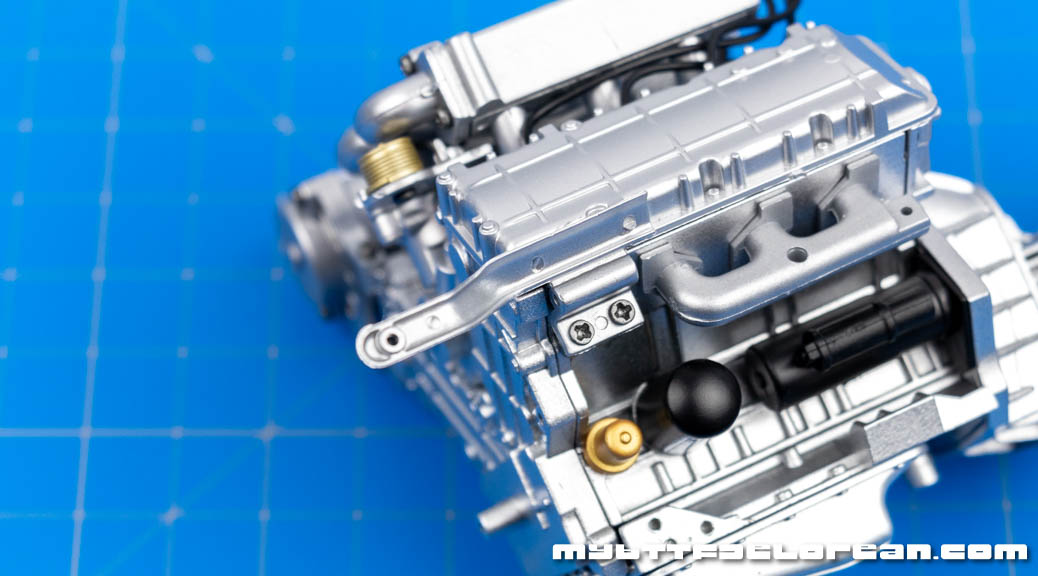 Combine the Distributor Front and Rear (alternator) parts and fix them together with one (1) AP screw:

There is a small pin and notch (circled in red below) on the two halves that align them correctly: 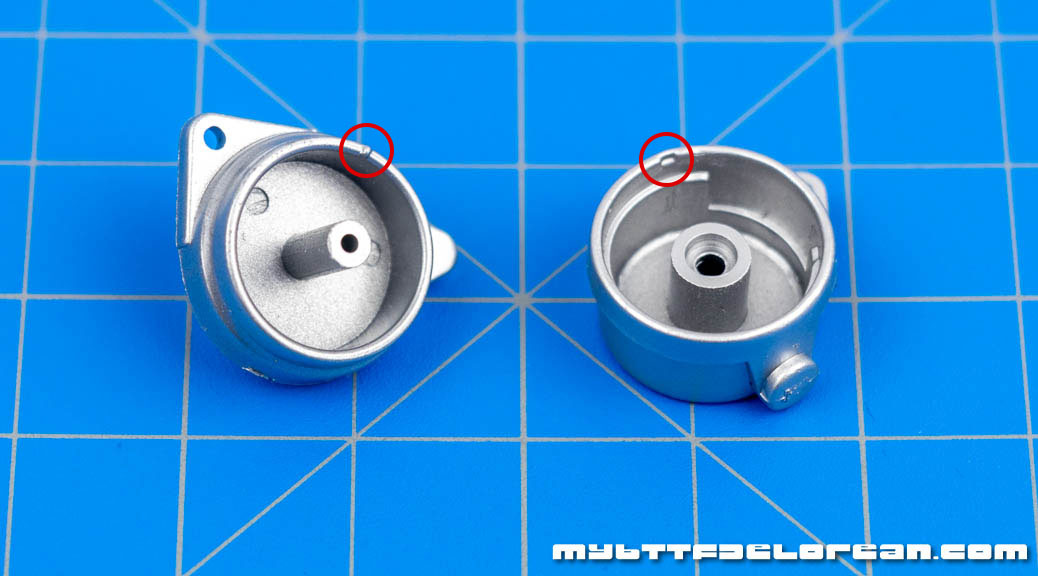 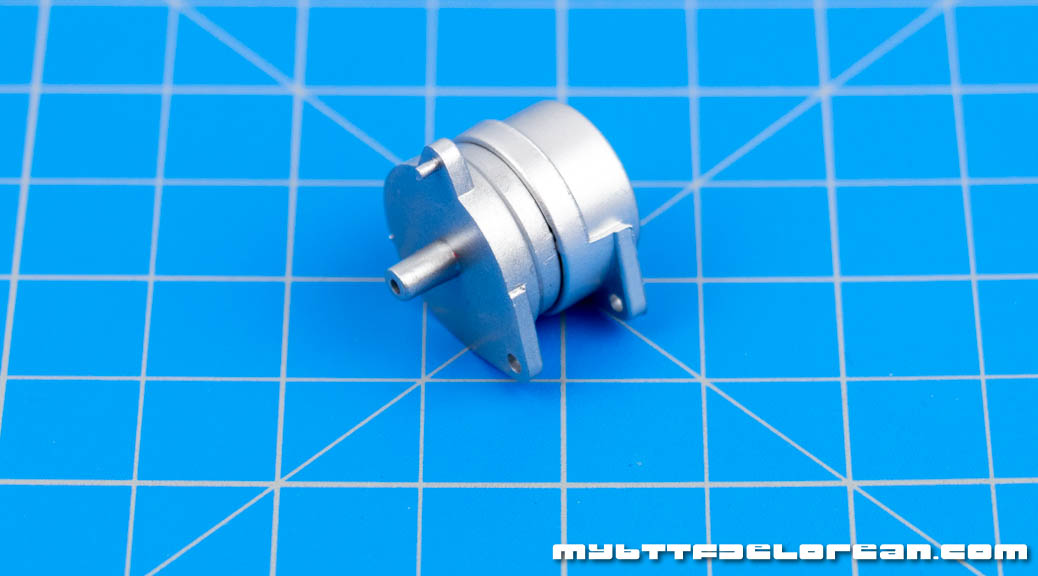 Place the alternator assembly on the right side of the engine, just below the Engine Side Bracket, and secure the rear with one (1) AP screw: 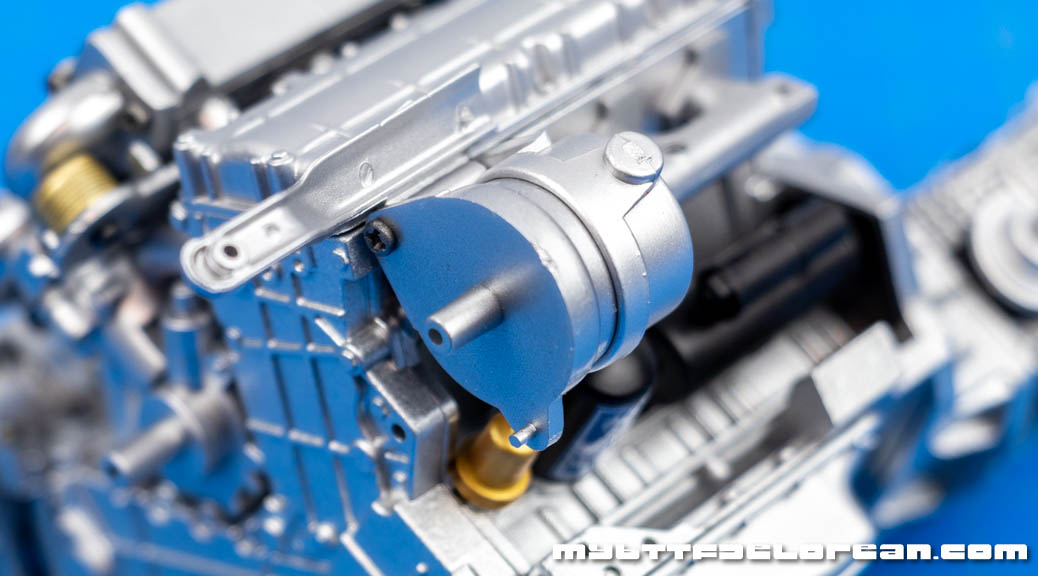 Tighten one (1) AP screw into the rear of the alternator to fix it into place.

Eaglemoss calls this the rear, but it is the front of the alternator: 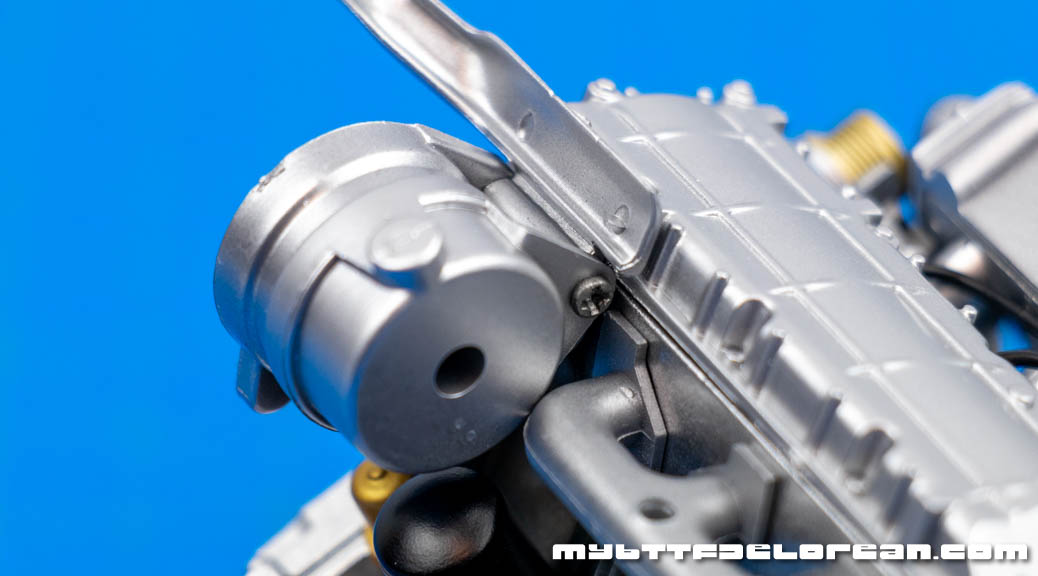 Place the Distributor Bracket (alternator bracket) onto the rear of the engine and alternator and secure with one (1) AM screw.

The pin on the alternator goes into the smaller hole of the bracket. I had to temporarily loosen the two previous screws to get this properly aligned: 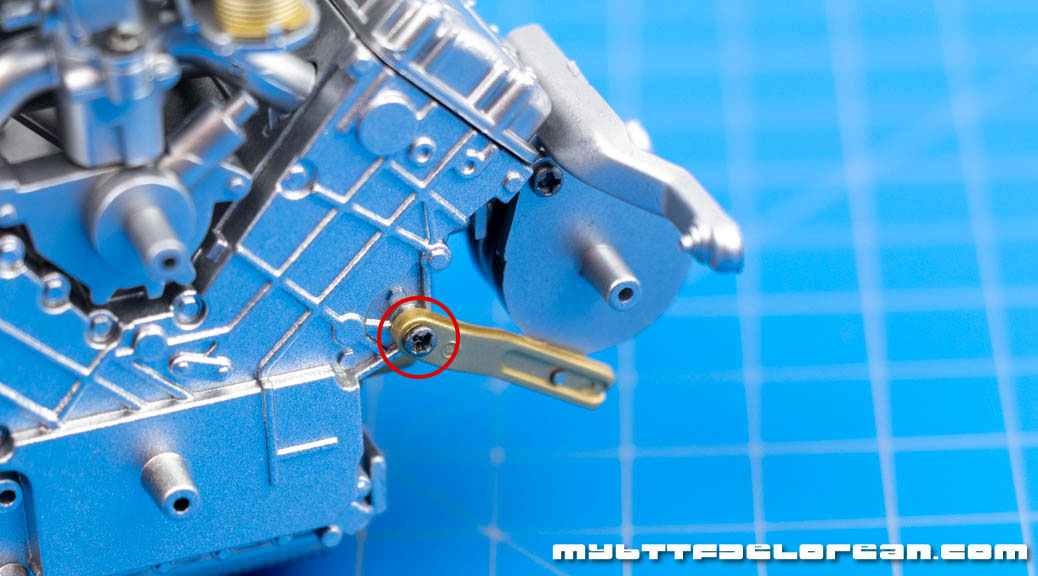 Pass the Dip Stick through the (exhaust) manifold and into the hole in the bottom of the engine.

This does not stay in place very well, so a tiny drop of super glue in the hole will help keep it where it belongs: 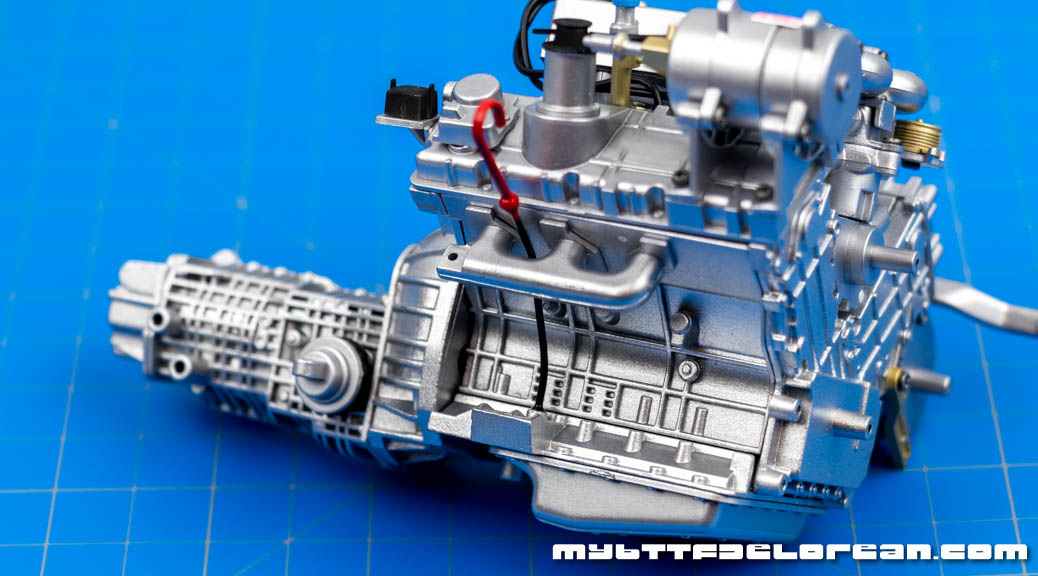 Secure the Transmission Case Left Bracket to the left side of the transmission with two (2) DM screws: 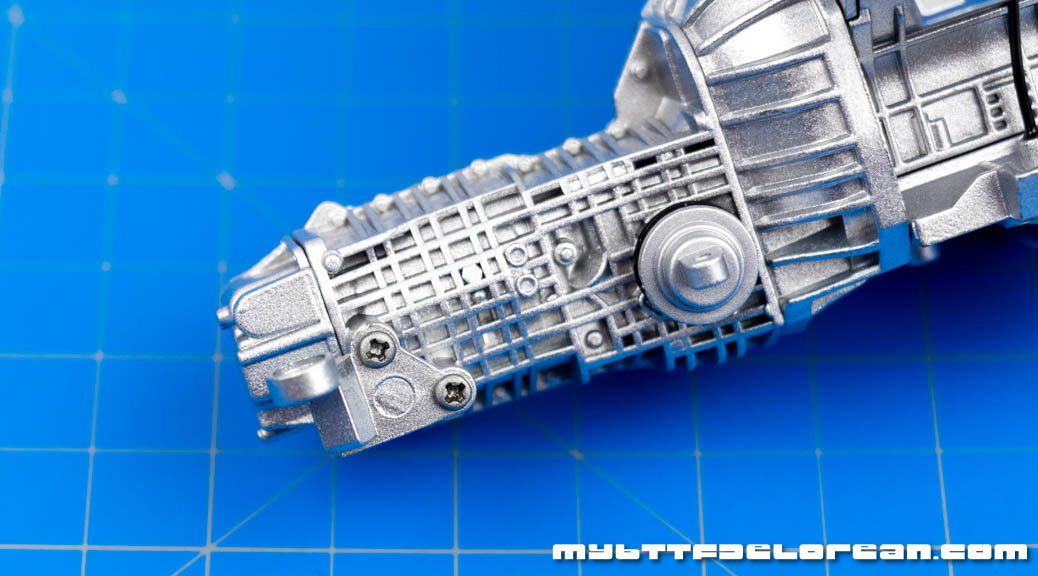 Fit the Transmission Case Right Bracket to the other side of the transmission with two (2) DM screws: 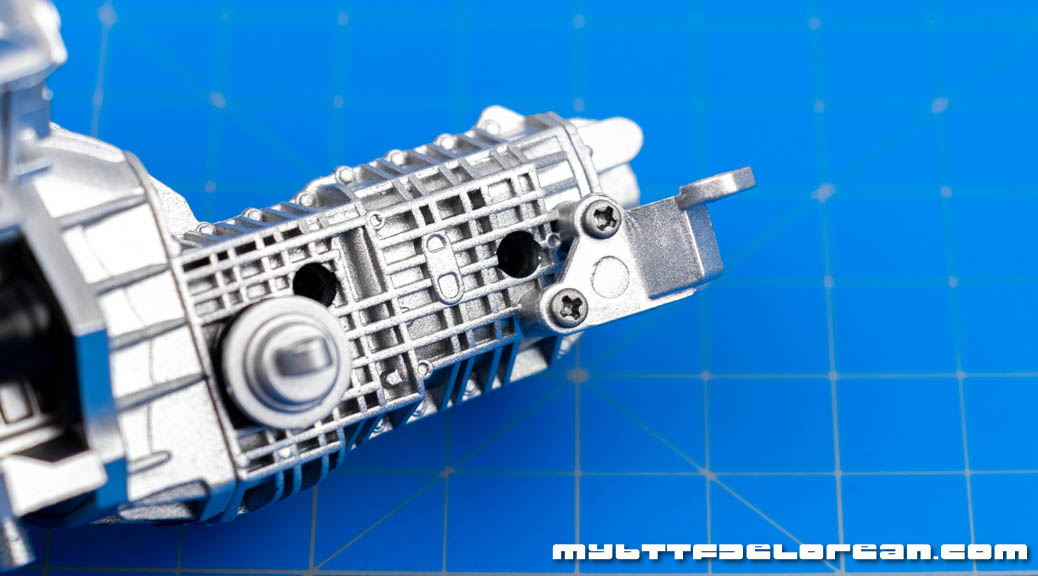 Wow! I’m so happy to finally have the manual transmission mounts installed, but otherwise, there was not a whole lot to do in this issue. Still, we are one step closer to installing the engine!