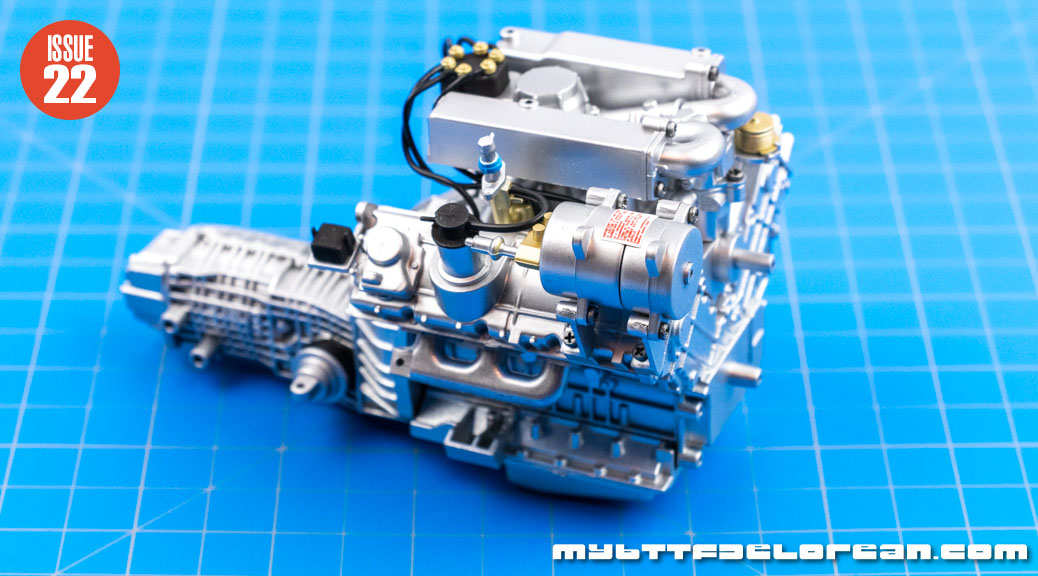 This issue concentrates on more of the detail components of the engine. There are many tiny pieces in this issue, so you might need those tweezers we received a few issues ago.

Materials: Everything in this issue is made of plastic. 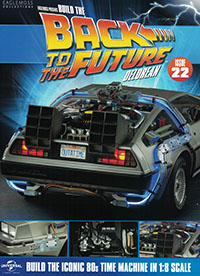 I painted the Cover piece (along with the Fuel Distributor later on below) with Tamiya XF-1 Flat Black. I also gave the Throttle Control and Fuel Injectors a coat of Model Master Acrylic 4672 Brass paint. Finally, back in Issue 19, I had already pre-painted all of the visible screw heads for this issue in Tamiya XF-56 Metallic Grey. 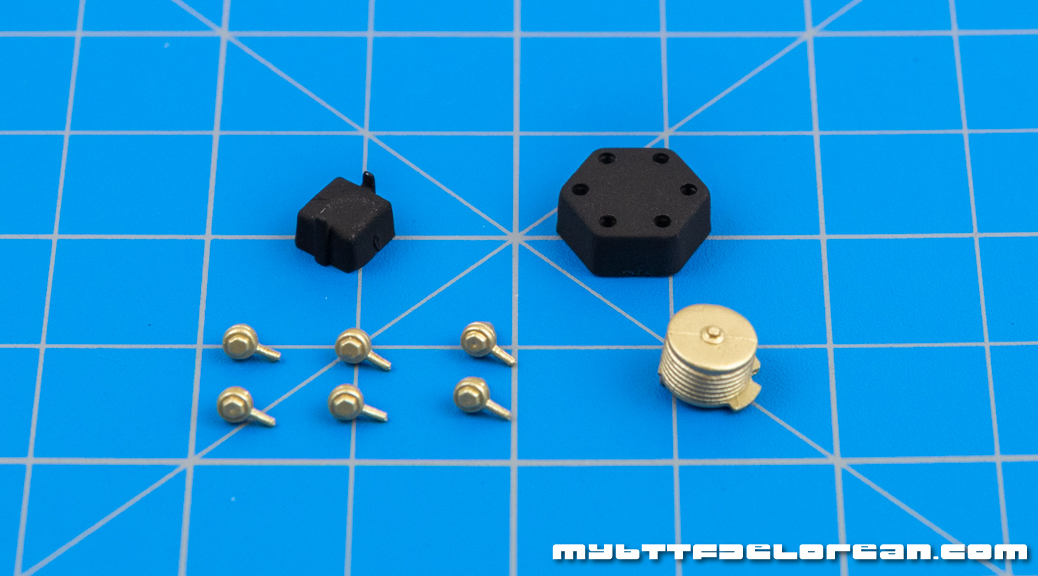 Lower the Cover onto the posts of the Bracket.

There is a key to align this correctly and it held itself in place with friction alone. But, you may choose to use a drop of super glue underneath: 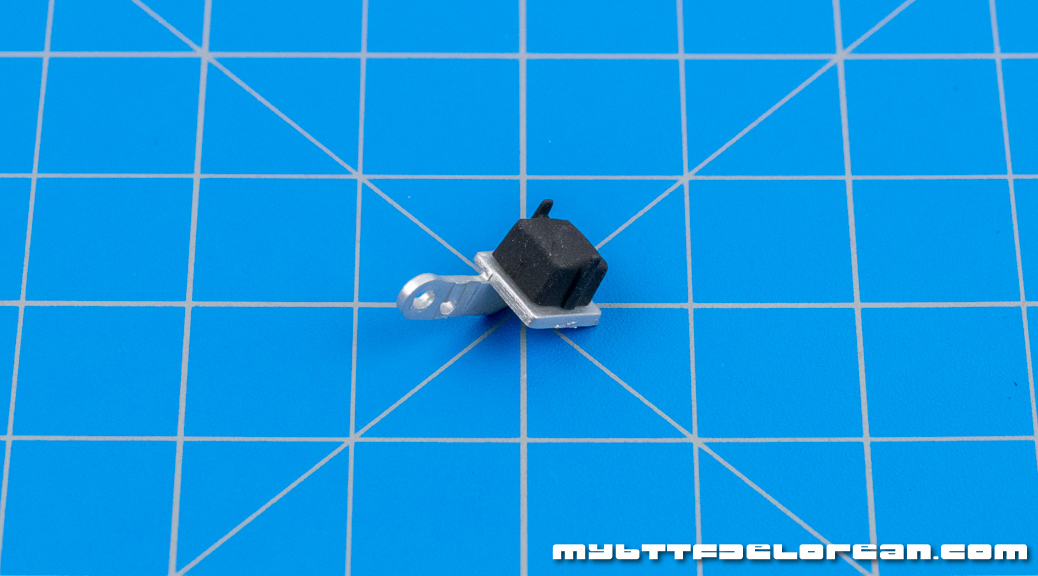 Place the assembly onto the post on the front left of the engine and secure with one (1) MM screw.

Many people have sworn out loud over this screw and some of them even had the screw shatter. That is likely because this is the thinnest screw head in the build so far. This detail and more can be found on my Screws page. I recommend using 3-in-One Oil or similar on the tip of the screw and taking the time to drive the screw in first without the Bracket until it stops. I then backed it out and attached the part without problem. Worst case scenario, this can be glued in place: 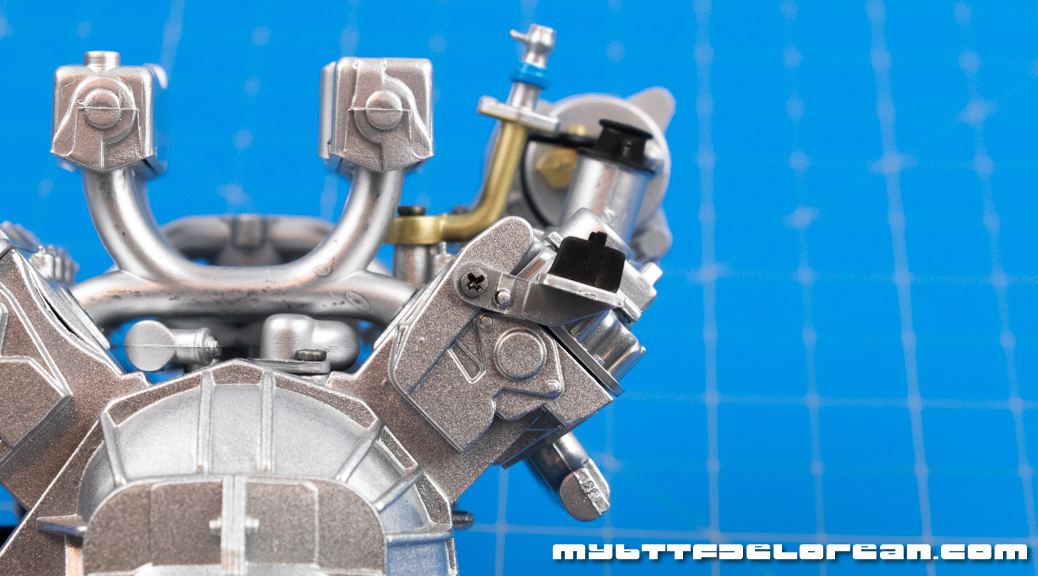 Fix the Thermostat to the top rear of the engine with two (2) AP screws.

There was a pin to align this correctly: 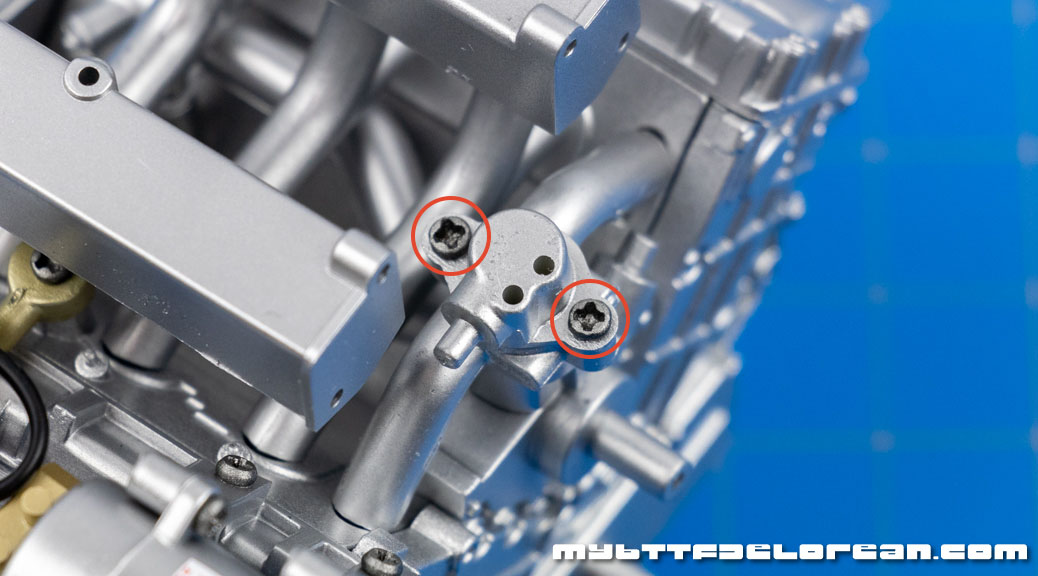 Place the Throttle Control onto the corresponding area of the Arm and secure with one (1) AP screw.

There was a tab and notch on the Throttle Control to get this seated properly: 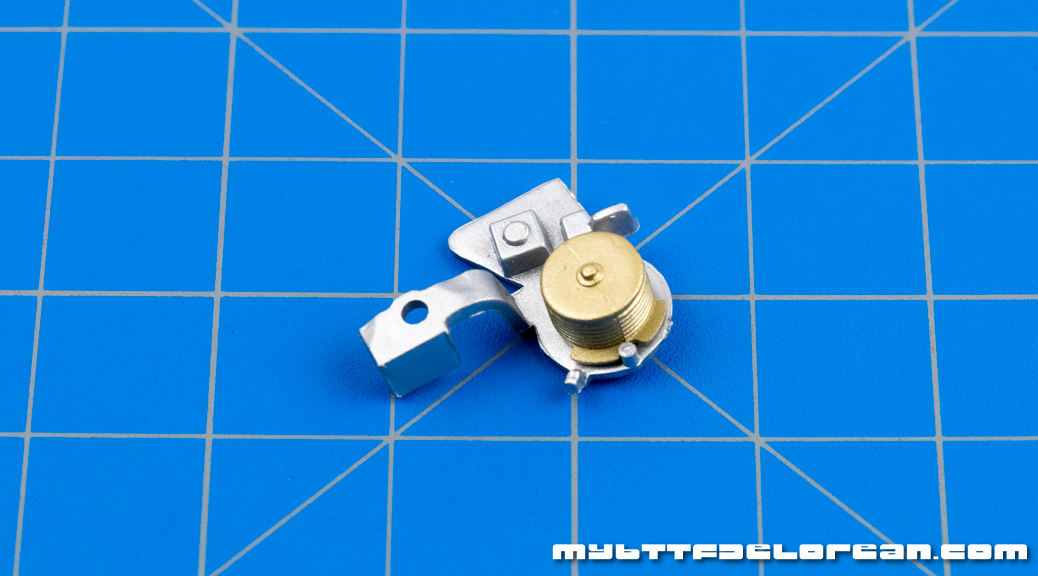 Place the assembly on the top rear of the engine and secure to the Thermostat with one (1) AP screw: 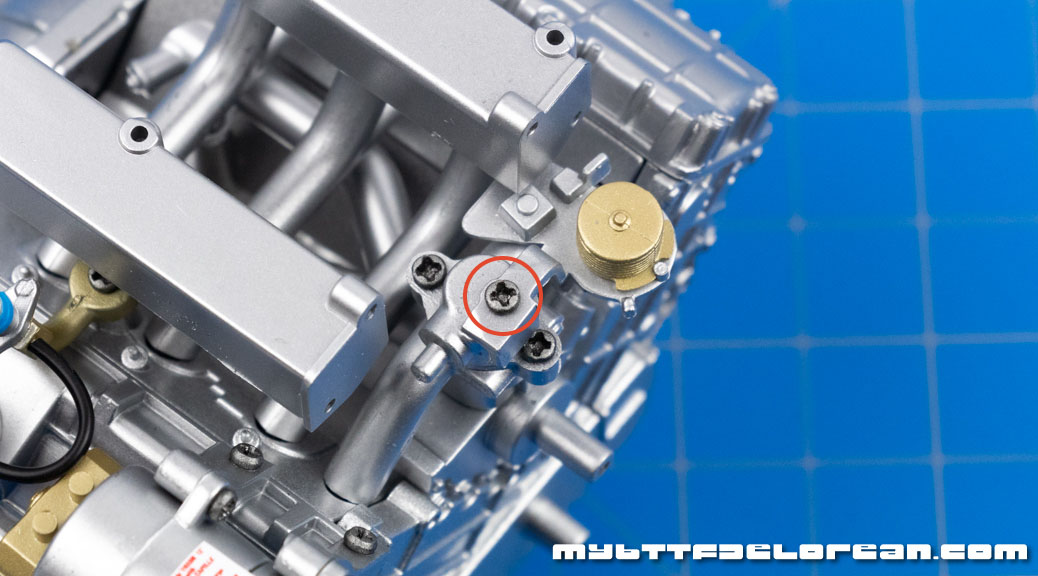 Place the Fuel Distributor onto the square part of the Mixture Control Unit aligning the holes. Tighten with two (2) AP screws: 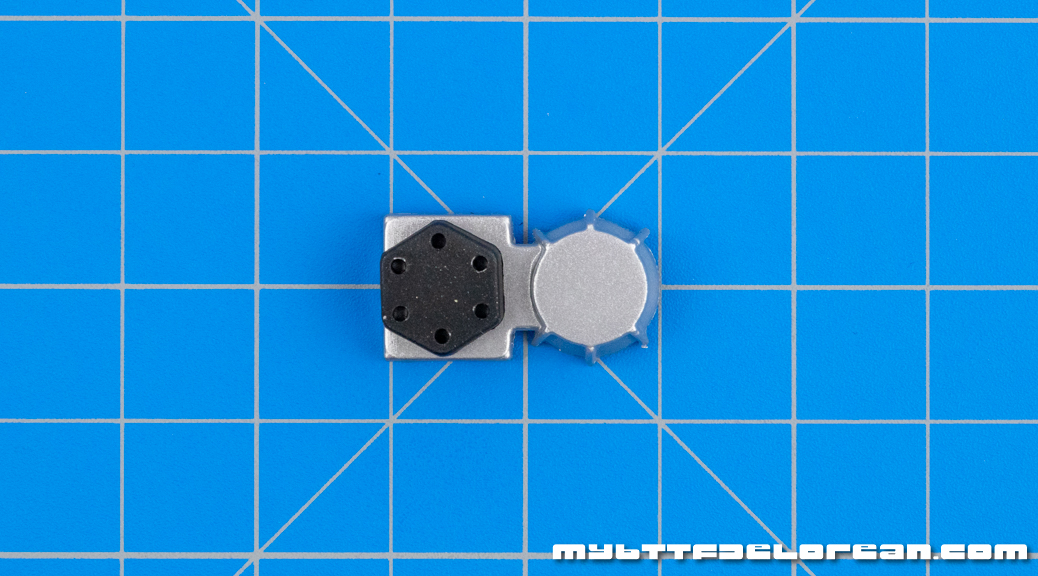 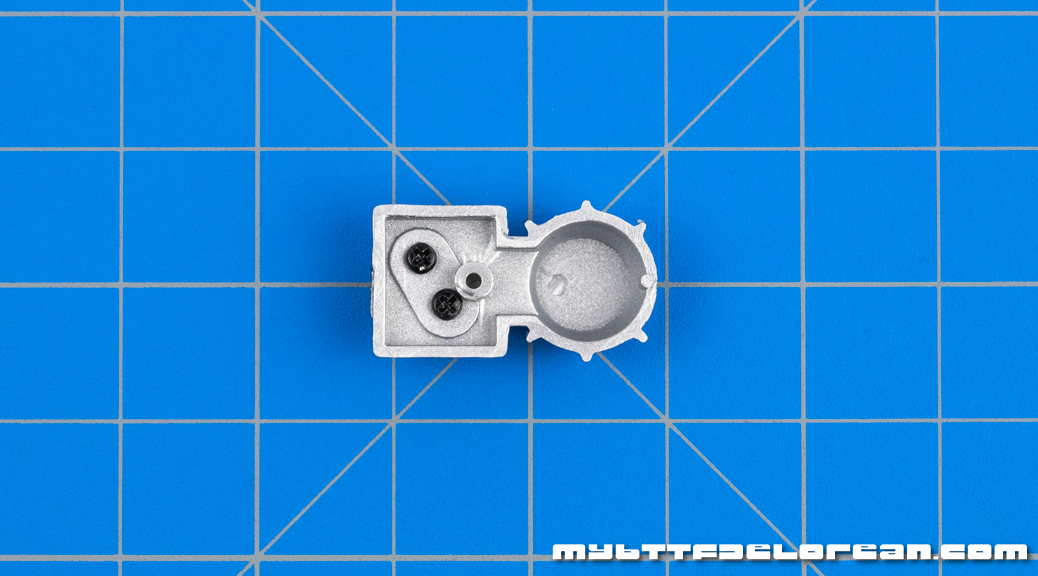 Place this assembly onto the Mixture Unit Housing And Throttle Valve Assembly and secure with one (1) AP screw: 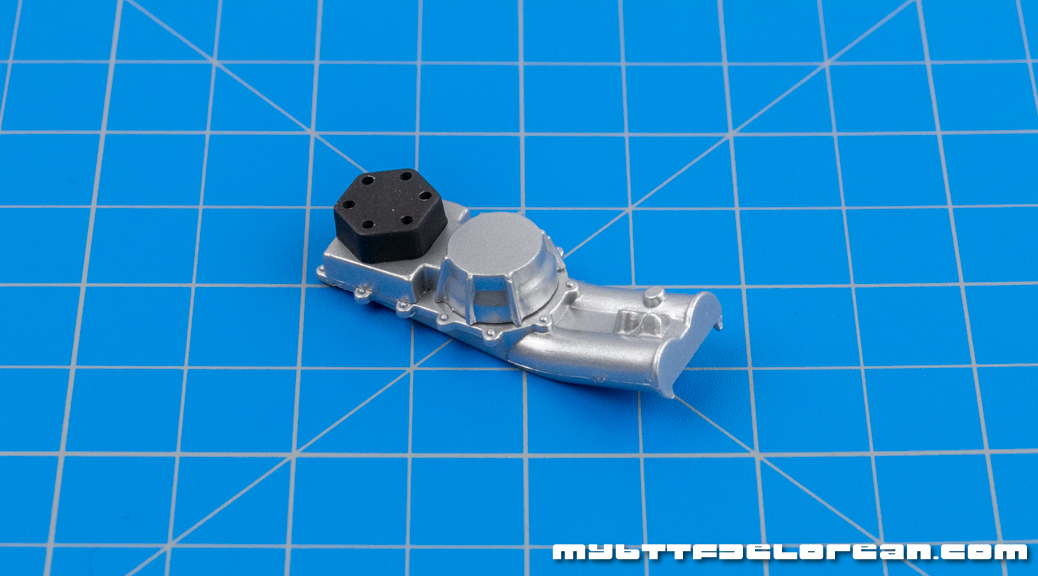 Fit the Intake Manifolds onto the end of this assembly as shown, and secure with two (2) AP screws: 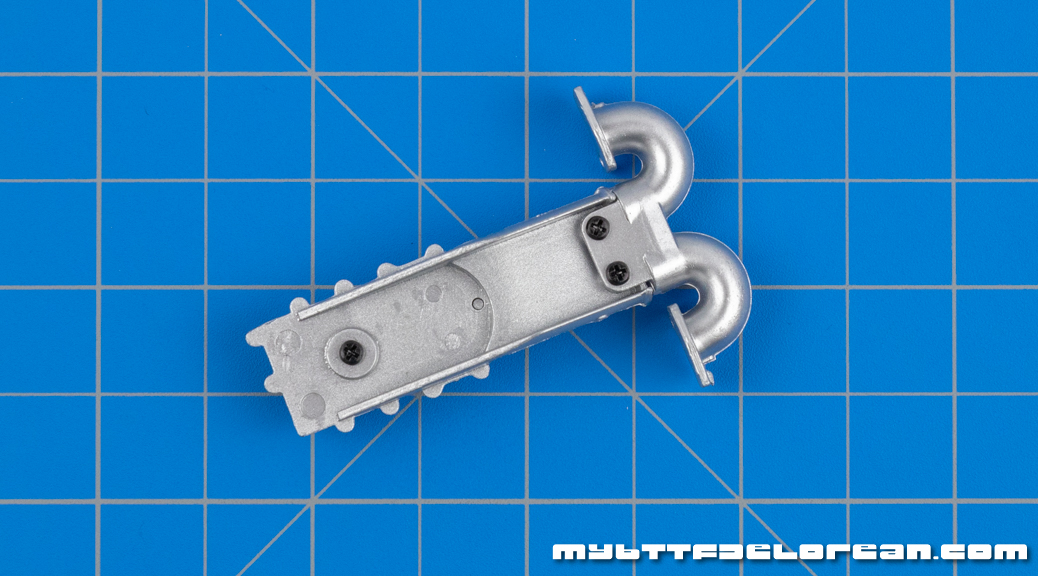 Place this entire assembly between the air intakes on top of the engine as shown. Use four (4) AP screws to secure it in place:

Before I mounted this piece, I inserted all the Fuel Injectors from the next step. The front part of this moves too much when mounted, making that part tricky. Doing it before this step makes it easier to press them in: 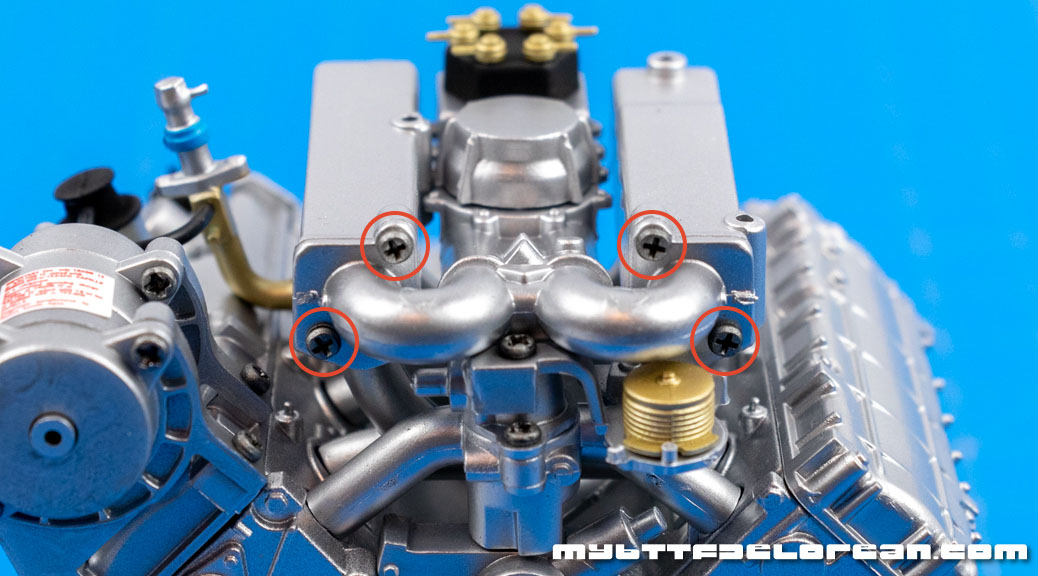 Insert the six Fuel Injectors into the holes of the Fuel Distributor facing to the sides: 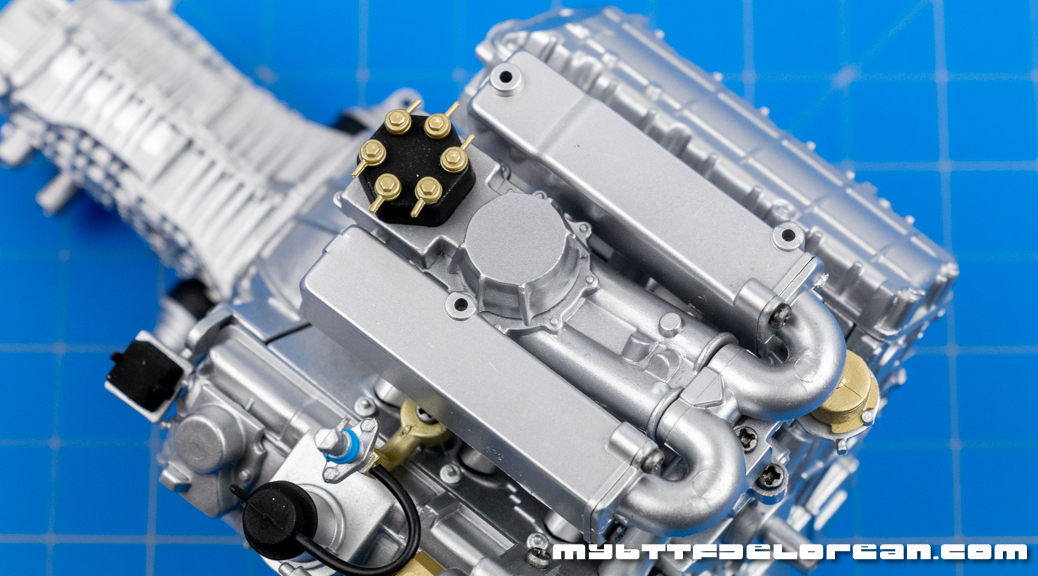 The hoses are indeed different lengths from longest to shortest, with two of each: 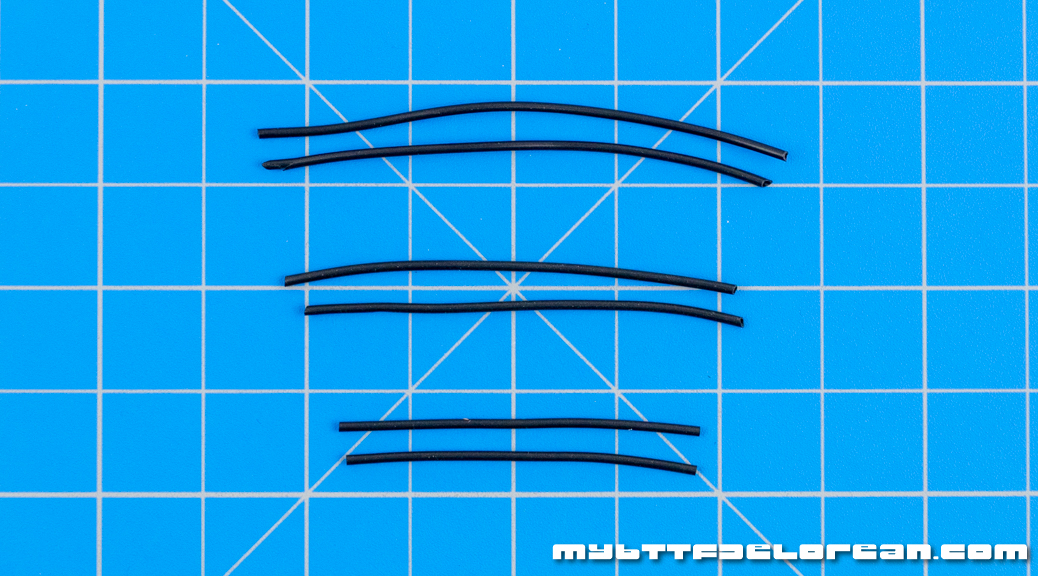 Fit one end of a Hose (Short) onto the front right Fuel Injector and the other end onto the first post on the right Engine Top.

I did not take photos of these six steps. After the first hose went in, I was unhappy with the results. Therefore, I looked for another solution. Scroll down to my MOD ZONE section below for all the details.

Fit the second Host (Short) between the front left Fuel Injector and the first post on the left Engine Top:

Fit a Hose (Medium) between the second right Fuel Injector and the second post on the right Engine Top:

Fit the second Hose (Medium) between the second right Fuel Injector and the second post on the right Engine Top:

Fit a Hose (Long) between the last two points on the right side of the engine:

Fit a Hose (Long) between the same two points on the left side of the engine:

I had seen many other builders struggle with the layout of these little vinyl hoses. Luckily, I had some 22 gauge Craft Wire handy and it fit perfectly inside them! So, I wanted to see if I could give them some rigidity and bend them into a more realistic (and manageable) shape. I started by cutting the wire into pieces a little shorter than the hoses: 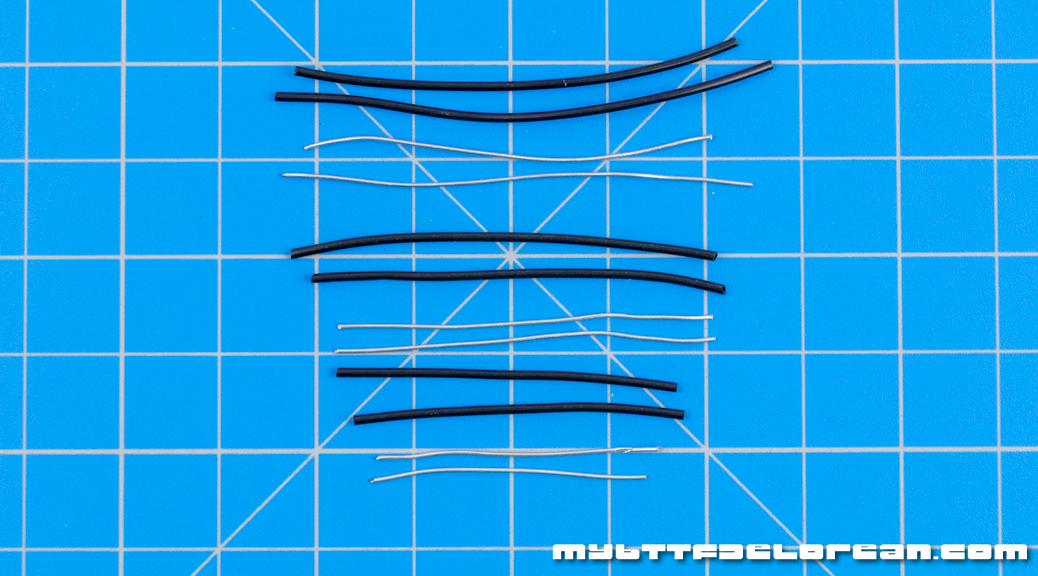 I then super glued the one end of each hose down onto the corresponding pegs on the Engine Top. The shortest hoses are near the Fuel Distributor and the longest near the Water Pump. You may also notice I rotated the Fuel Injectors to a more accurate pattern: 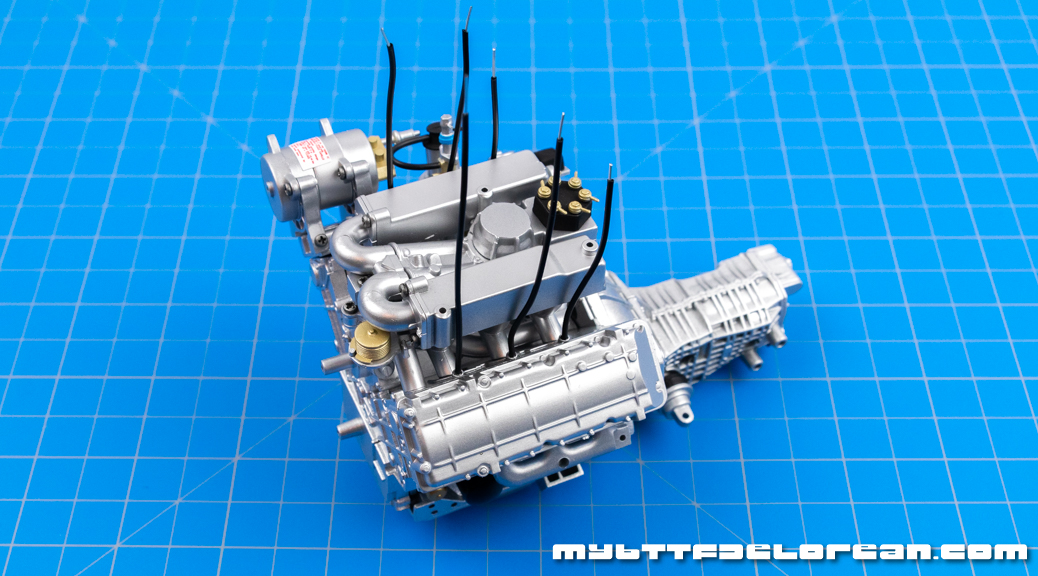 Using an ink pen to bend the hose/wires around, I worked them into the proper shape. I then slid the open end of vinyl hose down the wire a little and cut off the extra wire. This was to leave space for the pin on the Fuel Injector. Finally, I super glued the end onto the correct Fuel Injector. This was my result: 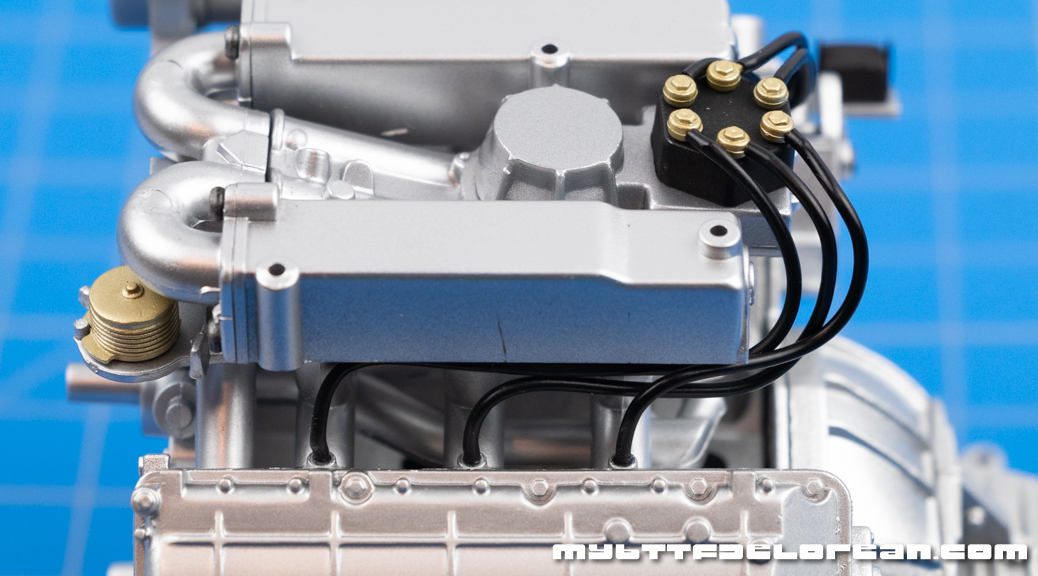 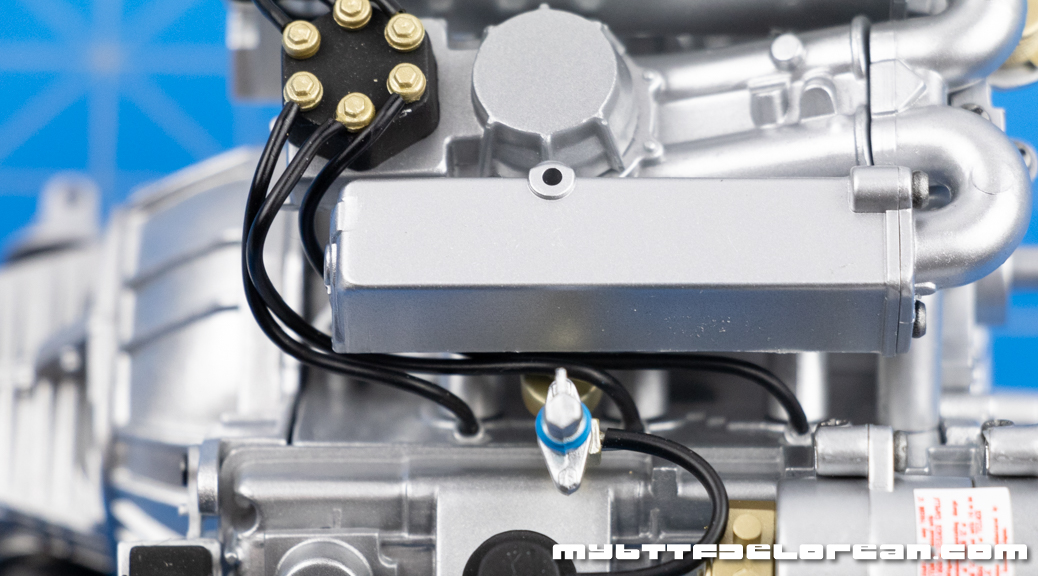 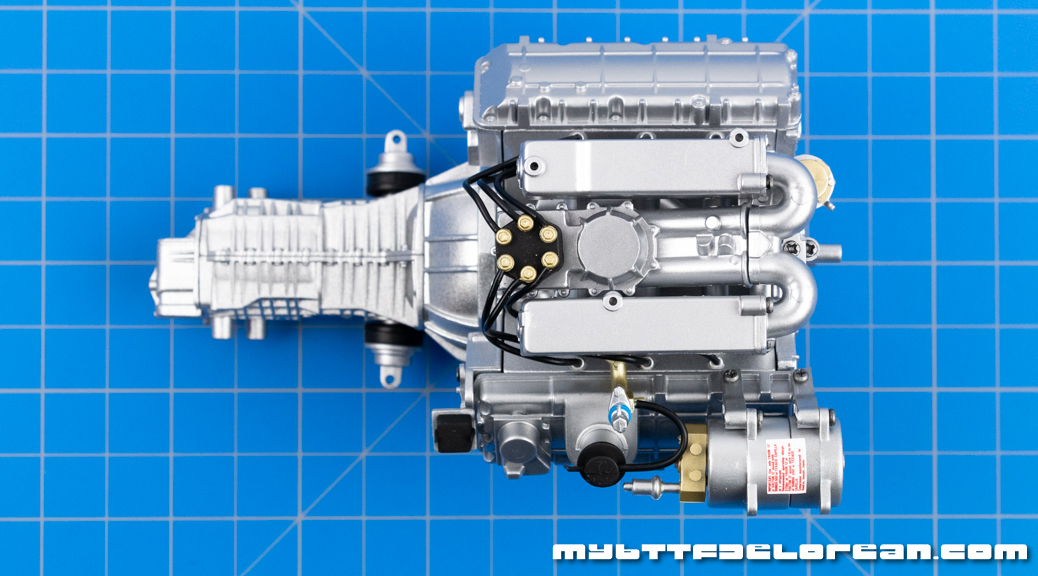 I was more than excited on how this mod turned out! It looks great and better matches the real DeLorean.

These last three issues contained a lot of tiny parts and a little bit of custom modding! Put all of this aside until next month’s shipment as that is when we will finish up the engine and get it mounted into the chassis!