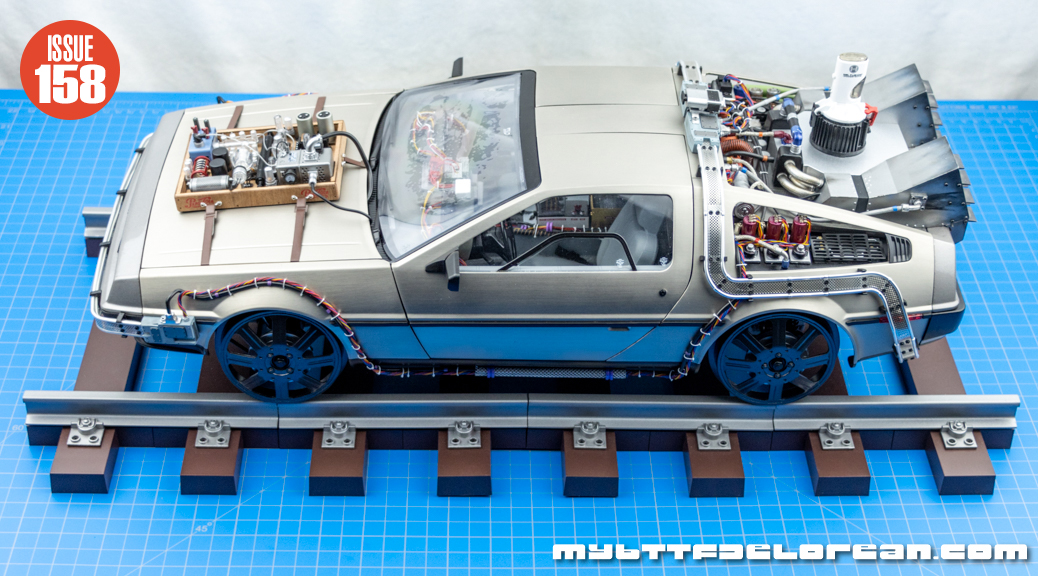 “Complete the fourth railroad wheel and fix all four wheels to your DeLorean, then fit the car onto the completed 1885-era railroad base.”

Materials: The Railroad Wheel is metal, but the remaining parts are plastic. Retrieve your DeLorean. Remove the stock wheels from the car by removing each center Hub, Washer, and GM screw.

Remember those four black plastic Brackets we received with Issue 38? Those are ‘jack stands’. Place them under the car just inside of the wheels on both sides, as shown. This keeps the weight of the car off the axles and makes removing the wheels much easier: I am using Magnetic Wheel Caps from Mike Lane so my center Hub caps come out easily using the supplied tool. However, if you installed the stock caps, try using sticky tape or Blu Tack to pull them out. Using any sharp tools may damage them: Collect all four of your Railroad Wheel assemblies built in the previous issues, including their individual Washers and Wheel Nuts: Fit a Washer over two (2) of the included TM screws, as shown: Secure a FRONT Railroad Wheel to the front axle on this side of your DeLorean using one of the new TM screw/washer sets, as shown: Then, secure a REAR Railroad Wheel to the rear axle on your DeLorean using the other new TM screw/washer set: Push the Wheel Nut into place over the screw holes.

Once these stock Wheel Nuts are pushed in all the way in, they can be quite difficult to remove later on: Instead, let’s use the Magnetic Train Wheel Caps mod from Mike Lane. These snap themselves into place and are easily removed with a supplied tool: There are two full sets of metal caps included with this mod. Which ones you use depends on the magnetic polarity of the wheel. You will know which ones to use as they will either jump into the center wheel hole or repel away from it: Here is what the Magnetic Train Wheel Caps look like installed. They are only slightly different than the stock ones, but much easier to use: Repeat the previous two steps on the other side of your DeLorean.

This process is the exact same, so I did not take a picture here.

Retrieve your Track assembly from the previous issue and carefully place your DeLorean between the Rails.

I swapped in Mr. Fusion here to accurately represent the configuration of the car when it is on the rails in the films: Ensure that the flanges of the Railroad Wheels are inside the Rails on both sides, as shown: And that’s it! We have reached the end of the Eaglemoss 1:8 scale Back to the Future Delorean build. There is still one more ‘special’ issue left, but it contains no parts or assembly steps.