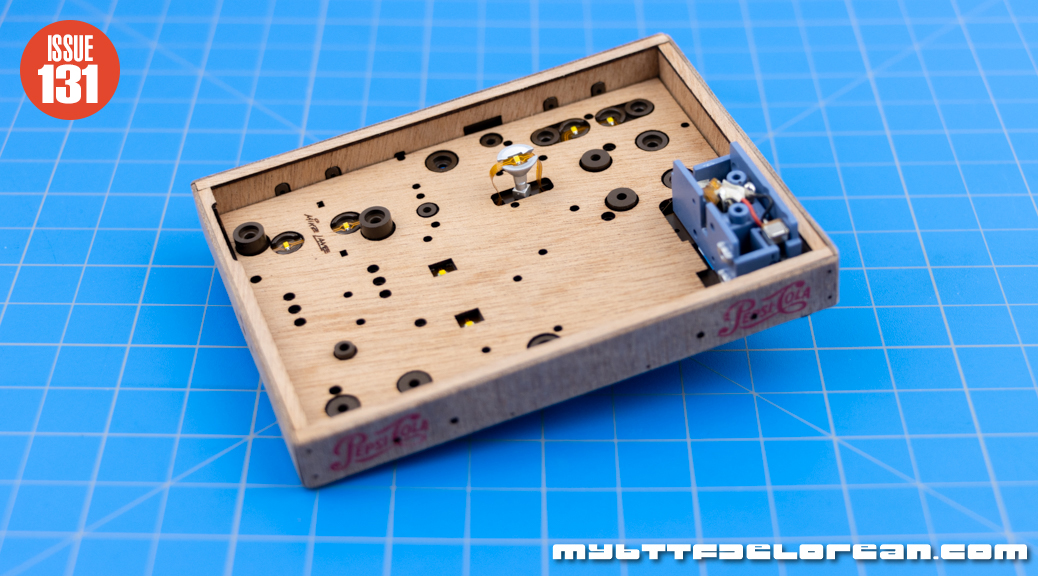 “Make the box of tricks that Doc Brown creates in 1955 to get the DeLorean to travel through time!”

This issue represents the first of the 29 optional Eaglemoss 1:8 scale Back to the Future DeLorean subscription extension issues. This extension includes the Time Circuit Box (or ‘Big Chip‘ as nicknamed by its prop creator) as well as the railroad wheels and track.

NOTE: The Time Circuit Box lighting seen here requires a CR1025 coin cell battery and this battery is *not* supplied by Eaglemoss.

Also, if you are going to install the Hood Box Upgrade Kit from Mike Lane, I would complete that mod before starting this issue. Push the bottom pin of the Support into this hole of the Time Circuit Box, aligning it as shown.

This Support will need to be removed again in Issue 134 to install the Base Plate into the Time Circuit Box (or for the Hood Box Upgrade), so I would just skip it installing this for now. I took this picture just to show where it will go: Position the two posts of the box section of the LED Ribbon and Switch into this location of the Time Circuit Box and align the LED ribbon down into these matching grooves (with the LEDs facing up), as shown.

Just for some color, I gave the cable clamp fittings on the sides of this switch box a quick shot of my Metallic Silver Sharpie: Then, I placed this into the Time Circuit Box. There is an alignment pin on the bottom of the switch box that will only allow it to fit one way: Secure the switch box section of the LED Ribbon and Switch to the Time Circuit Box from below with two (2) AP screws: Use strips of the Adhesive Tape to secure the LED ribbon down into the matching groove of the Time Circuit Box, as shown.

Be sure you do not cover any holes with these Adhesive Tape strips. I also cut two of the tape strips in halves to secure even more sections down: Pay special attention to this loop arch we created that will go over the top of the Support when we install it later on: Slide a CR1025 coin cell battery into the bottom of the box section of the LED Ribbon and Switch, as shown.

Once again, you will have to supply your own CR1025 battery here as Eaglemoss does not include one. As it turns out, this size of battery is not very common either. I could not find one locally at Walgreen’s, CVS, Home Depot, Lowe’s, Target, or even Walmart. Batteries Plus does carry them, but they are too far away. I had to order a CR1025 battery from Amazon.

While I waited for the battery to arrive, I went ahead and installed the Mike Lane’s phenomenal Hood Box Upgrade mod. Follow the link for details! From this point on in this issue, that mod will be seen in all pictures.

When you get your hands on a CR1025 battery, be sure you install it correctly, as shown: Slide this switch to the UP position (marked ‘I’) to turn on the LED lights.

The DOWN position (marked ‘O’) turns the LED lights off: Make sure all of your LEDs light up correctly. There should be nine of them (two of them are inside the blue box).

If your LEDs do not light up, try turning the CR1025 battery around. You may have installed it backwards. This is also what the finished Hood Box Upgrade from Mike Lane looks like: While this issue was a pretty simple assembly, I can’t get over how much better this Time Circuit Box looks with the Hood Box Upgrade mod. I am also happy that Eaglemoss provided a self-contained power source so we don’t have to wire this assembly to the car’s power. I am looking forward to seeing all of the little bits inside this thing. Keep this assembly safe until we need it again in Issue 134.