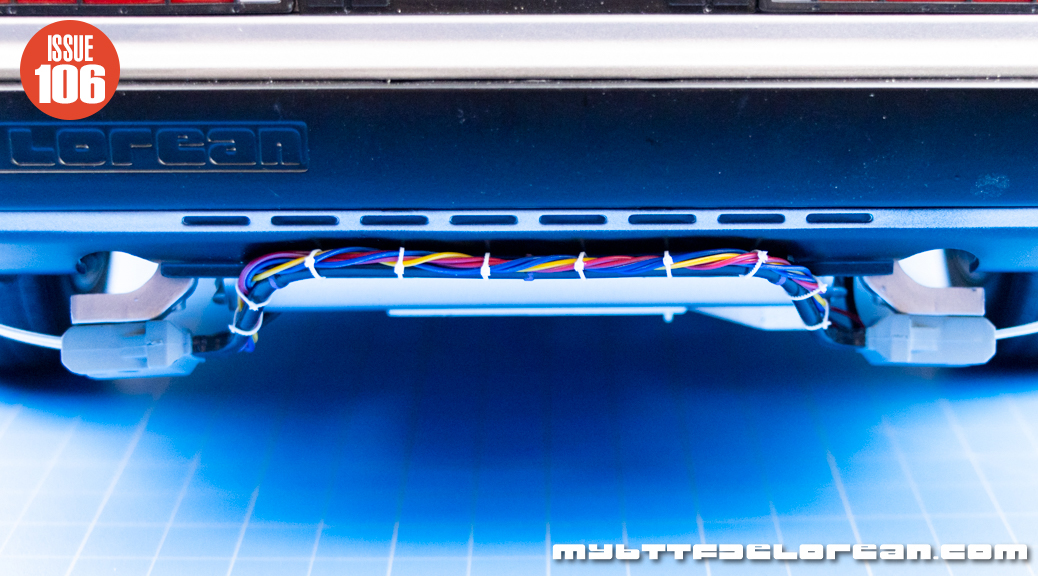 “In this issue, you will add LEDs and a support bar to the rear underside of your DeLorean.”

NOTE: I am installing the EL Light Mod from Model Modz as I build my model. There are some changes that need to be made during this issue to include this mod. I will note them where needed. If you are not using this EL mod, you likely can ignore these notes. 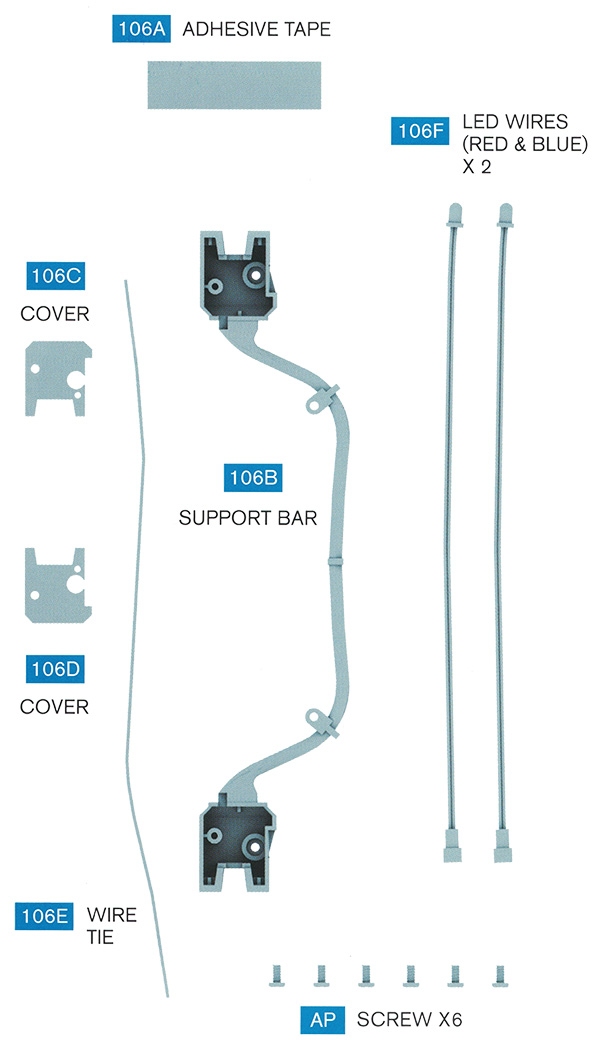 Materials: All of the non-electrical parts here are plastic, except the metal Wire Tie. 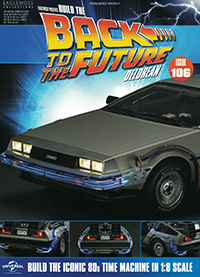 I do not have the side Lighting Filaments installed on my model due to my usage of The EL Light Mod. Therefore, I could not complete, nor photograph, the steps above. Instead, I first ran the left side EL wires through the brackets and bent them to match the shape of the Power Coils (which I pulled out of the next issue, Issue 107). I used pieces of painter’s tape to hold them in place temporarily: 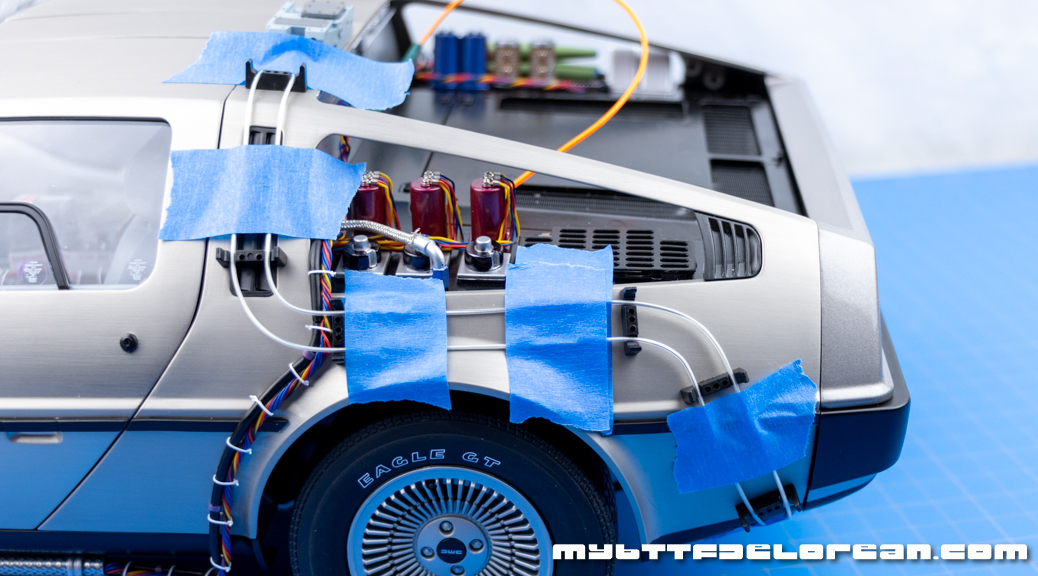 I repeated this process on the right side, using the Power Coils from Issue 108 to shape them correctly: 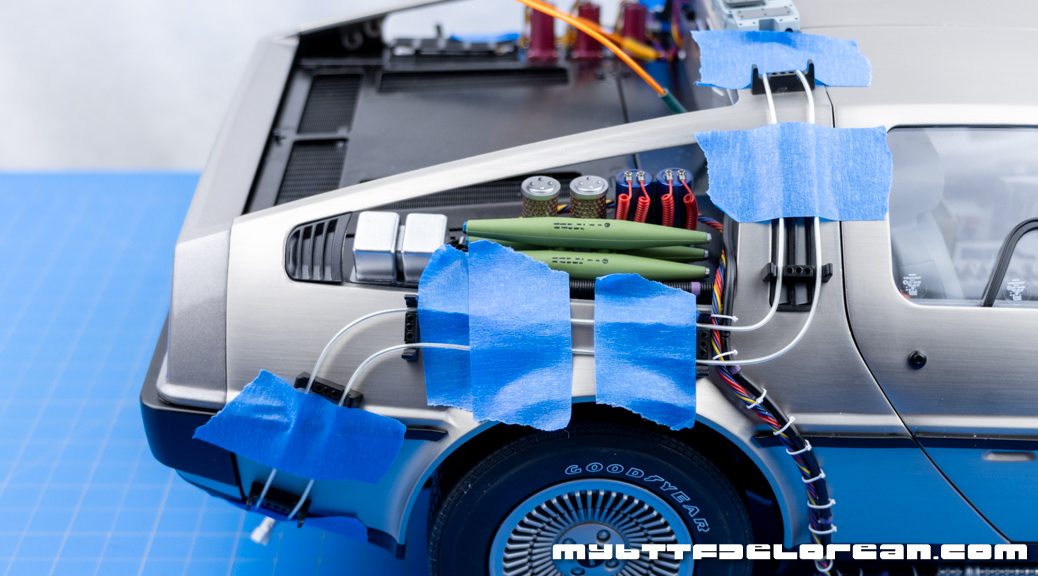 Fit these joined parts into the passenger-side end of the Support Bar, ensuring the Filaments/Wires fit down into the notch as shown.

EL Light Mod change: At this point, I did have to turn the car upside down. Be sure to use a thick cloth or towel to protect the roof parts. Both EL wires should feed into the box, but only the ‘plug’ wire comes out the other side. Also, there was a small length of extra EL wire on the ‘cap’ end, so I just gently folded the end over, as shown: 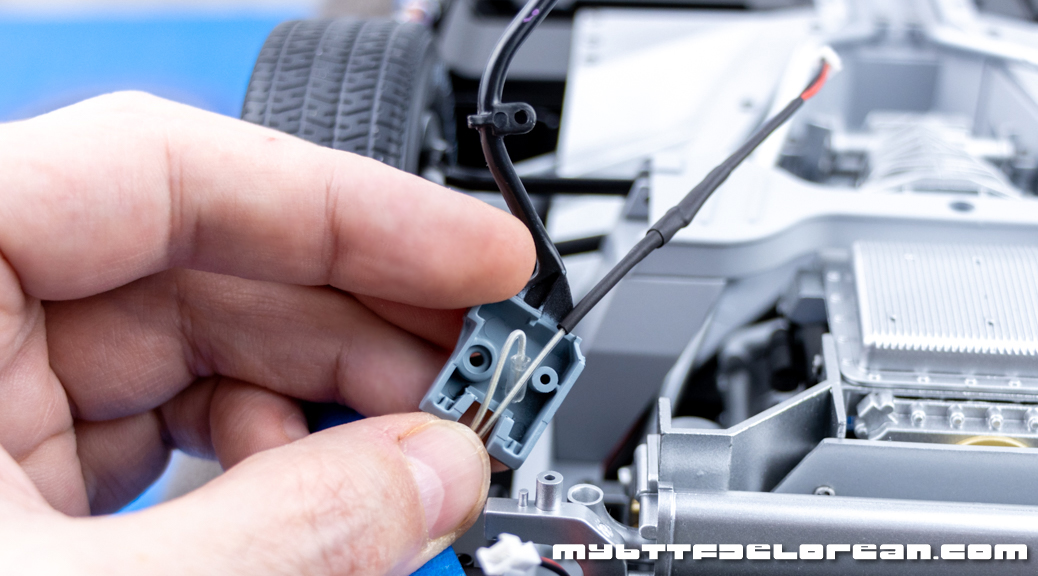 Place the Cover (106D) on top of the opening, ensuring you do not pinch anything, and secure with one (1) AP screw: 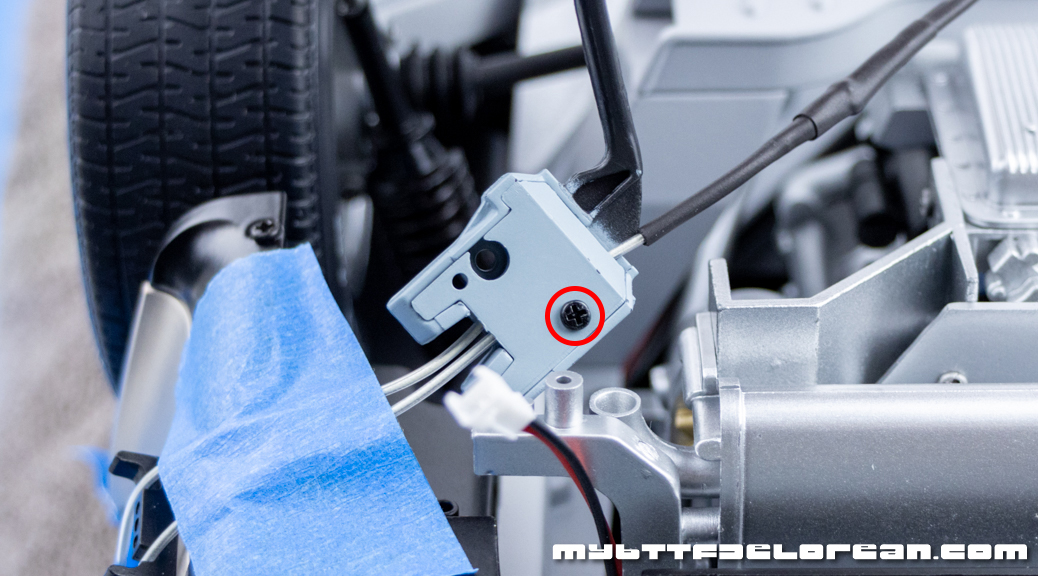 EL Light Mod change: I noticed that there was a little bit of the EL wire exposed on the ‘plug’ side of this box, so I removed the Cover and used a Black Sharpie marker to darken about 0.5 inch of the wire next to the heat-shrink. Then, the Cover was replaced. This worked perfectly to block any stray light: 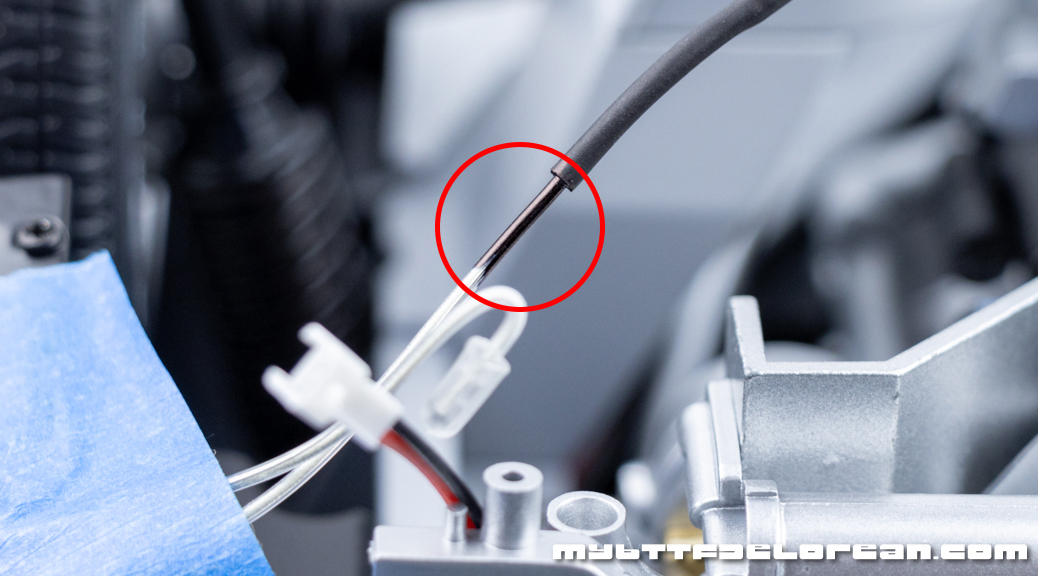 EL Light Mod change: I went ahead and did the same Sharpie darkening to the right side EL ‘plug’ wire as well: 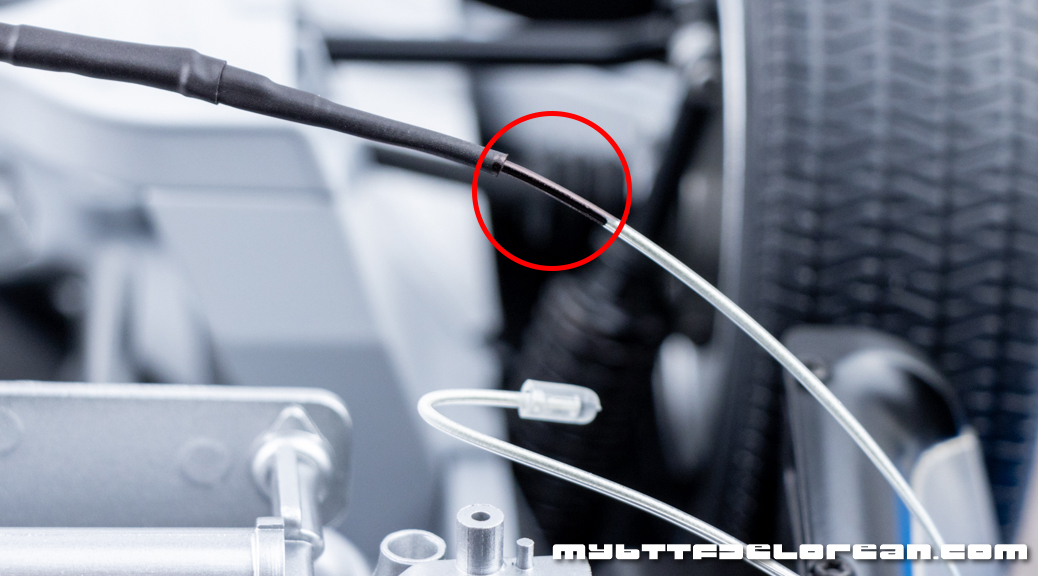 I could not photograph these steps either. I picked up the EL Light Mod install below:

Fit these joined parts into the driver-side end of the Support Bar, ensuring the Filaments/Wires fit down into the notch, as shown.

EL Light Mod change: As on the other side, both EL wires should feed into the box, but only the ‘plug’ wire comes out the other side. And as before, there was a small length of extra EL wire on the ‘cap’ end of this side as well, so I just gently folded the end over in the same way: 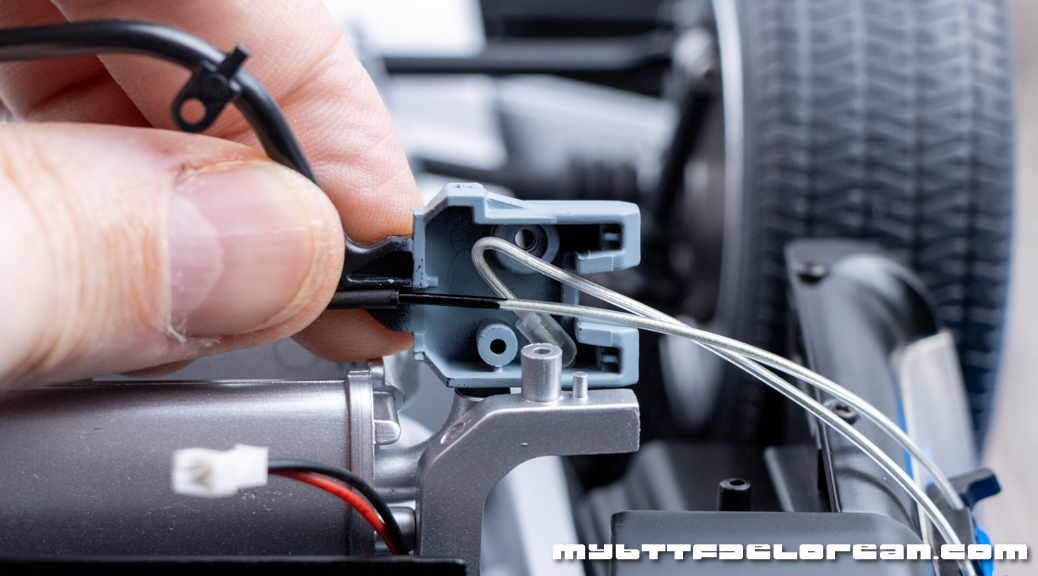 Place the Cover (106C) on top of the opening, ensuring you do not pinch anything, and secure it with one (1) AP screw: 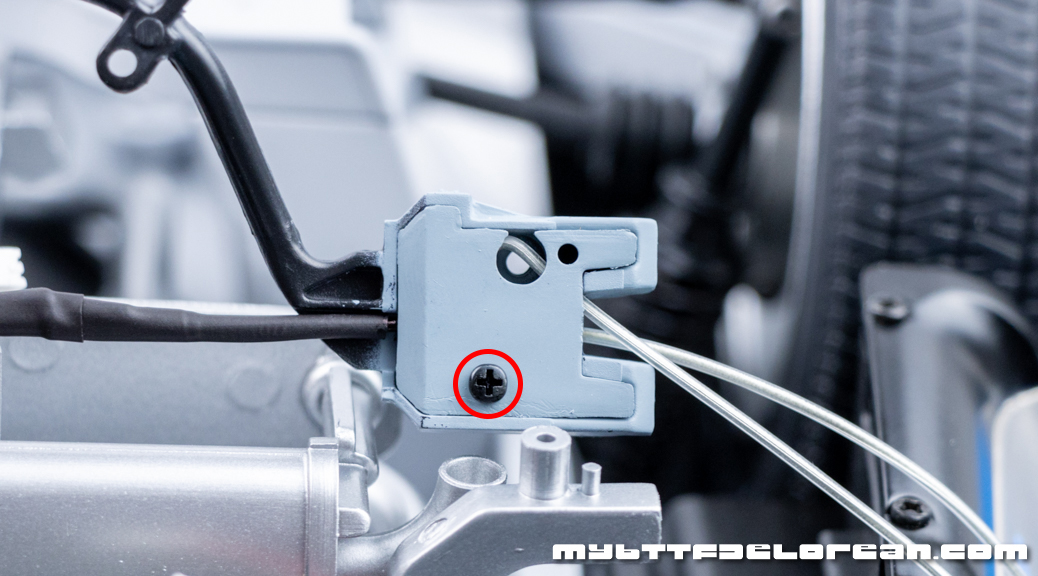 Carefully turn the Support Bar over and position it over the matching posts on the Connectors as shown. You may need to rotate the two Connectors vertically to fit this correctly.

Again, make sure you do not pinch any wires here: 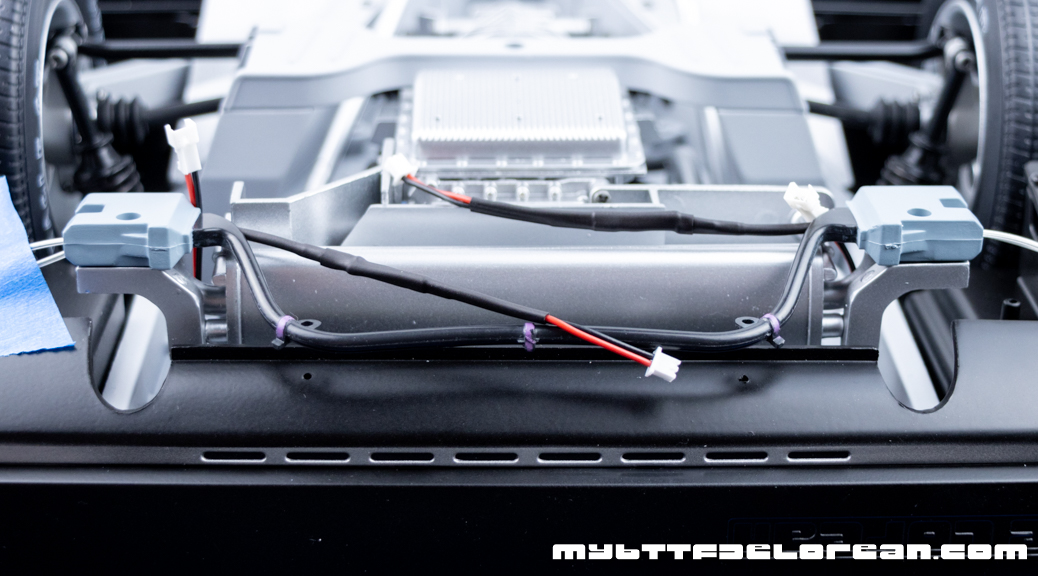 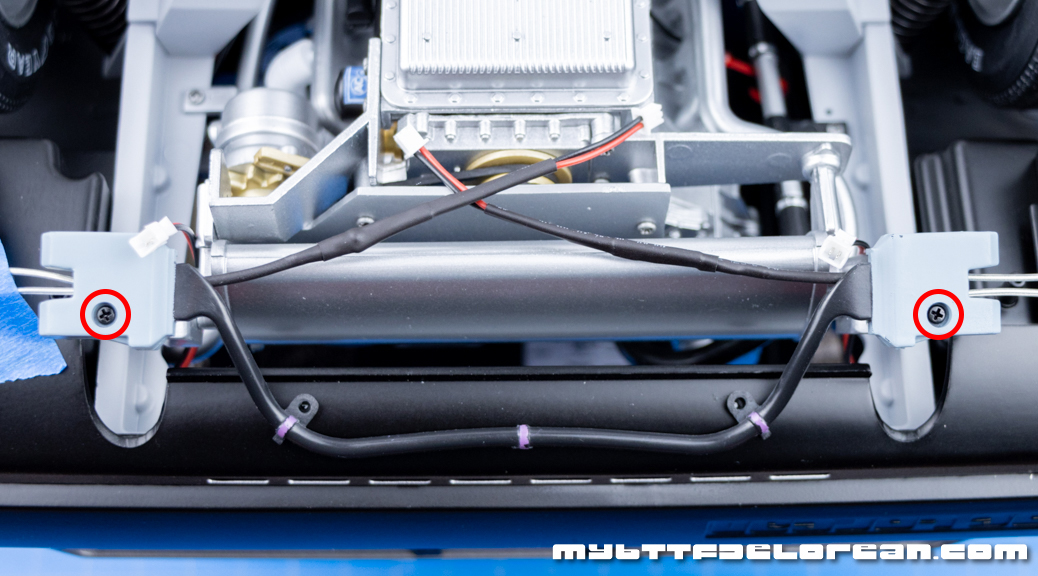 EL Light Mod change: I connected the two EL wires to the nearby supply cables we installed back in Part ONE of the EL Light Mod installation: 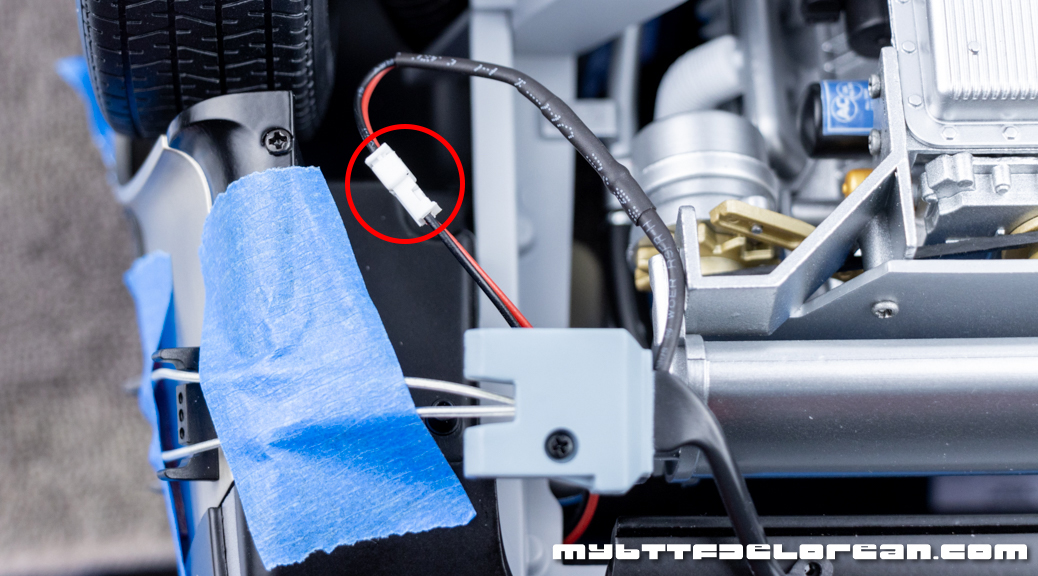 Then, I tucked the excess wire down and behind the bumper: 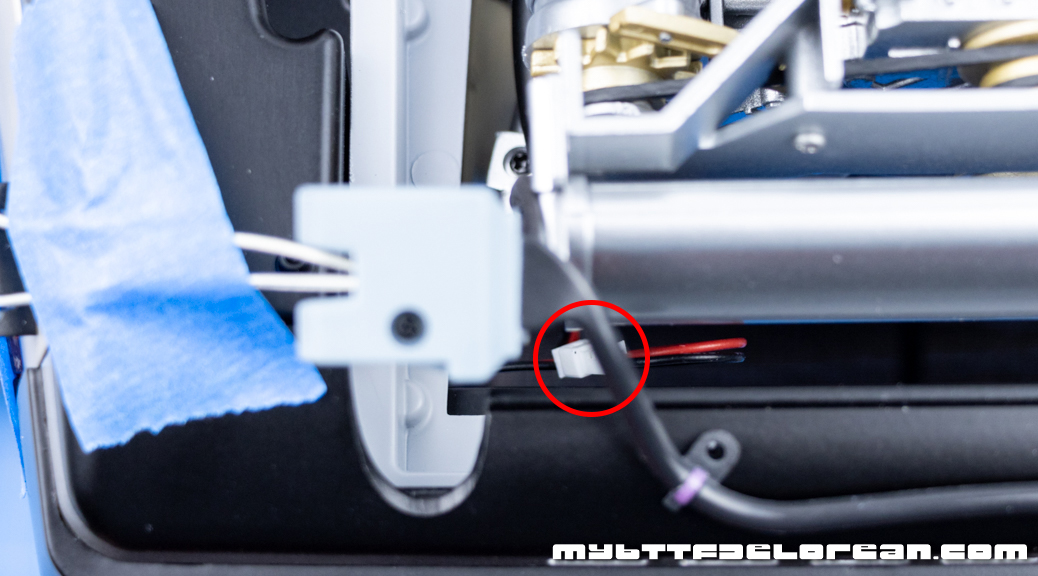 I did the same on the other side: 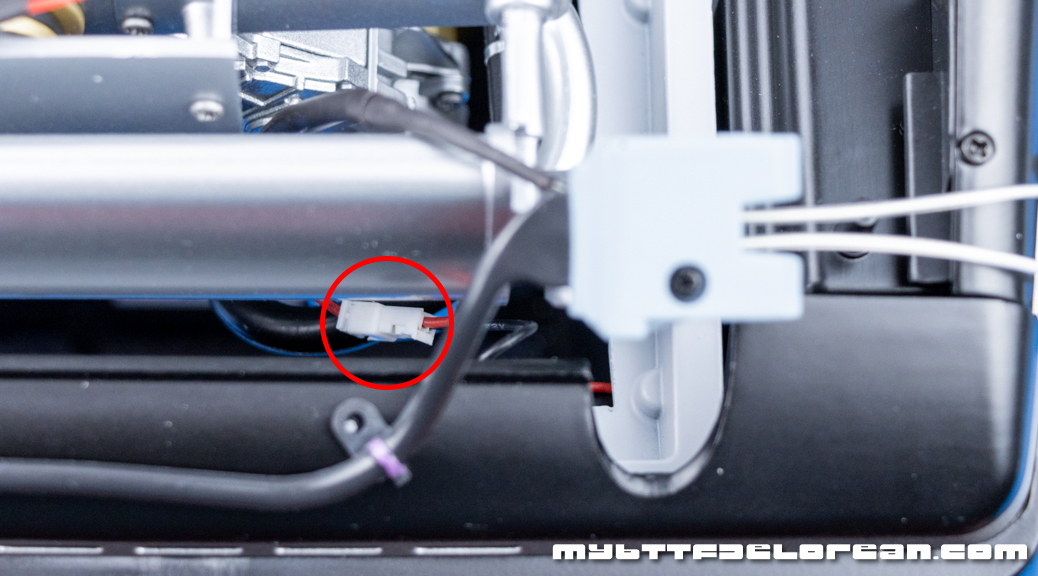 Secure the black ‘cable’ of the Support Bar to the rear valance with two (2) AP screws.

If you are not using the EL Light Mod, you may want to spiral the LED Wires around this ‘cable’ part of the Support Bar before you secure this. Make sure you leave enough slack to connect the plugs in the next steps.

EL Light Mod change: With the mod, there are no wires to attach to this Support Bar anymore. However, as you can see below the ‘A’ Car absolutely has them, so I needed to add something to have this look right: 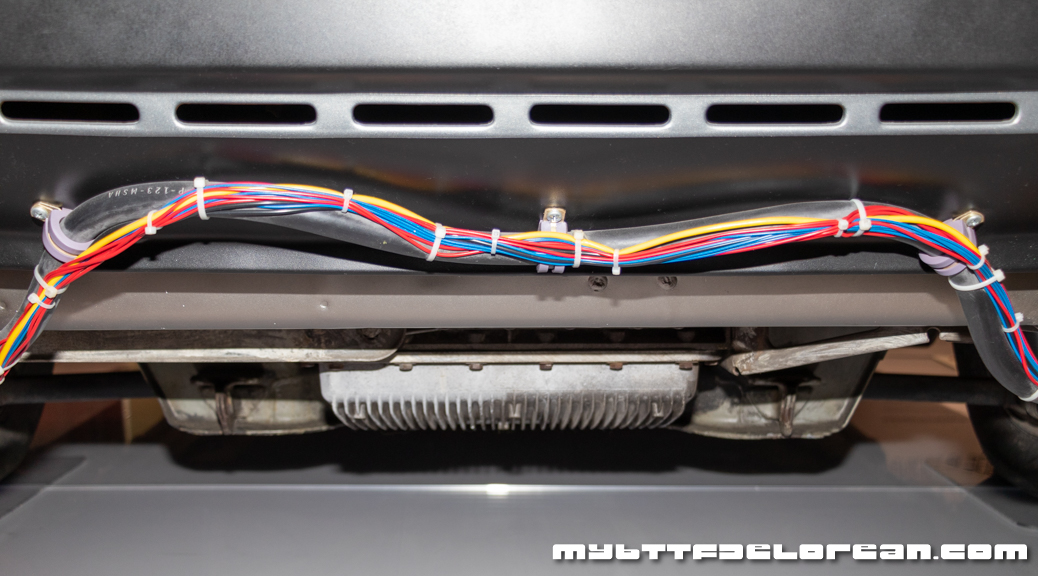 Luckily, some of the leftover wiring I removed to install the EL Light Mod had the right colors. In my case, Wire 19 and Wire 21: 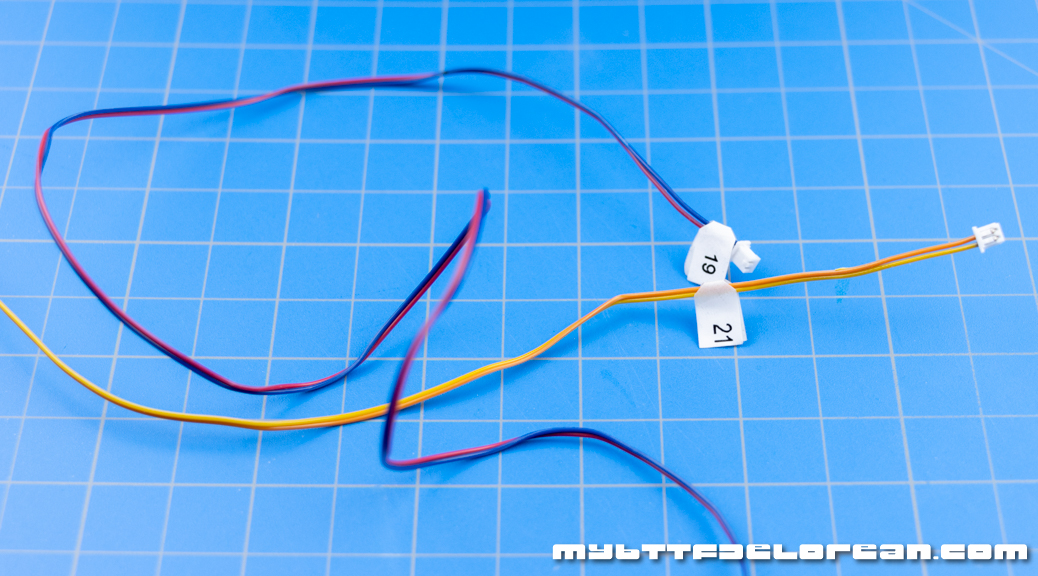 I cut the plugs off both ends of these wires and even cut Wire 19 in half. Next, I separated the wire pairs and removed the orange wire. This left me with two red, two blue, and one yellow wire. Then, I taped one end of each wire to my work surface: 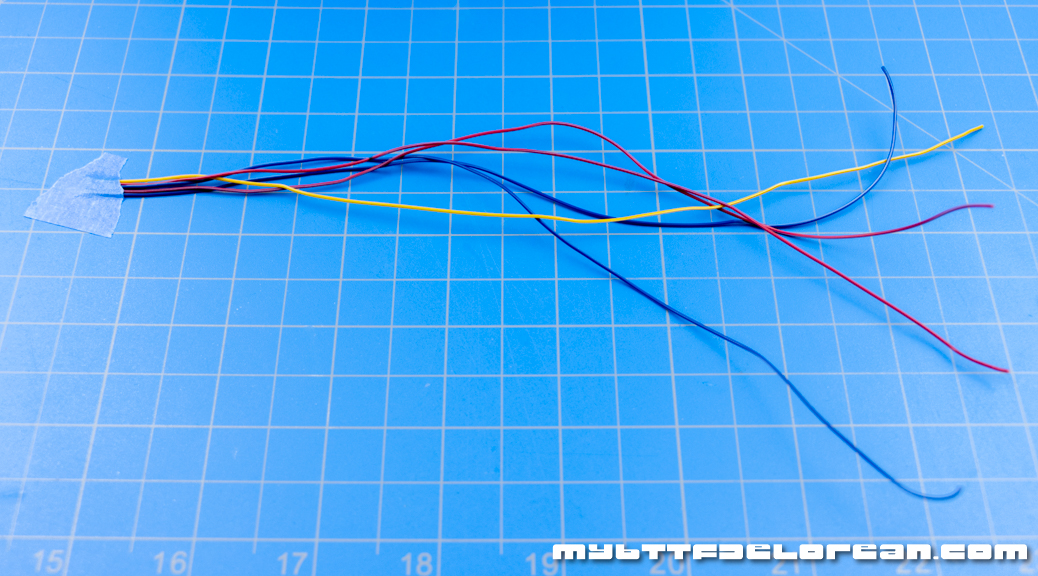 I tightly twisted all of the wires together to create a nice bundle. I taped the other end down to take this picture: 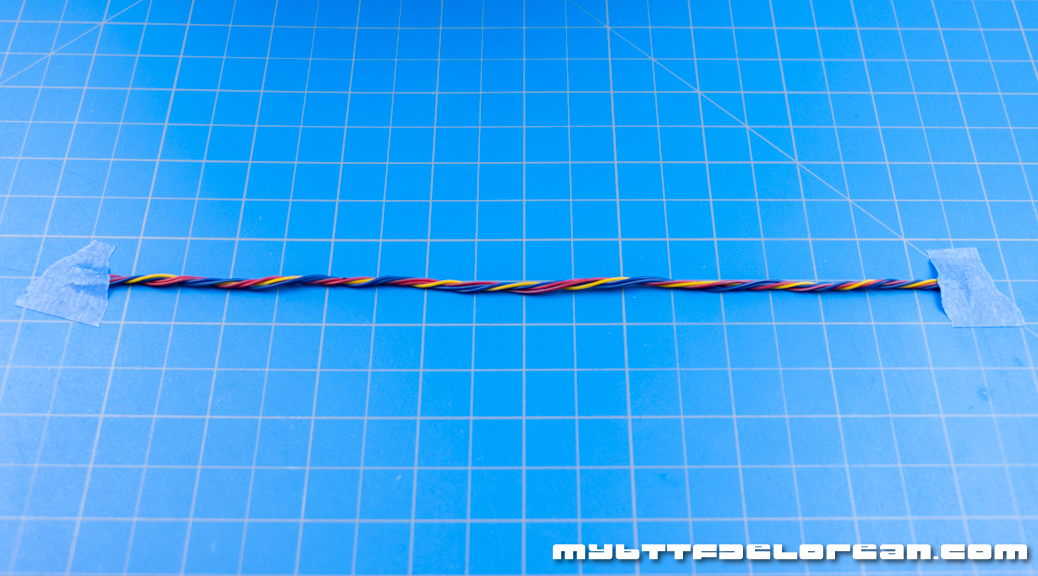 EL Light Mod change: There is an open slot where the EL wire comes out of the ‘junction box’. With some tweezers, I was able to feed all five wires at one end of my bundle into the extra space. It took a bit of time, but they all fit! 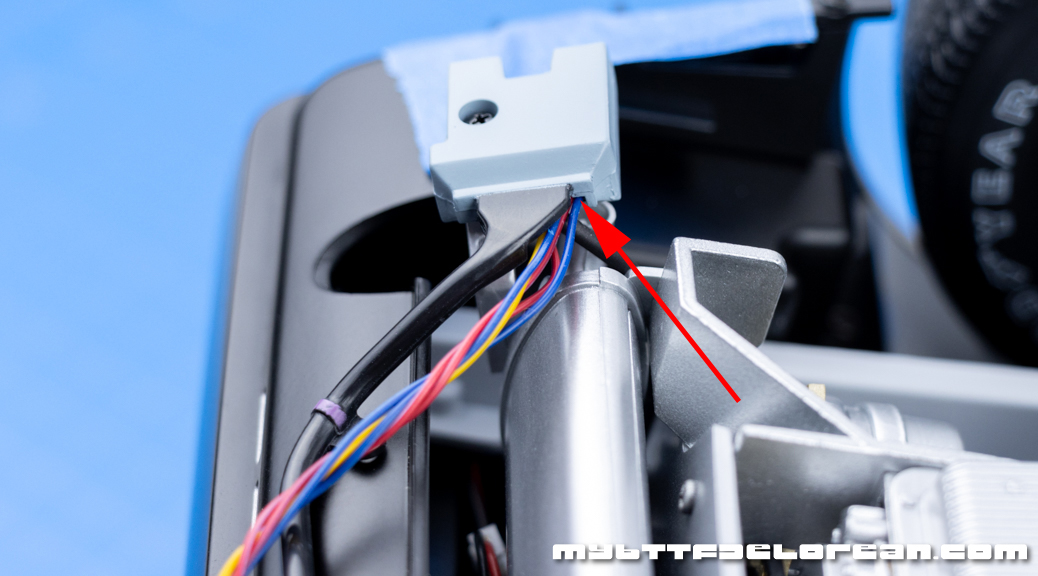 Then, I ran the bundle along the thick black cable of the Support Bar to try and match the appearance of the real car: 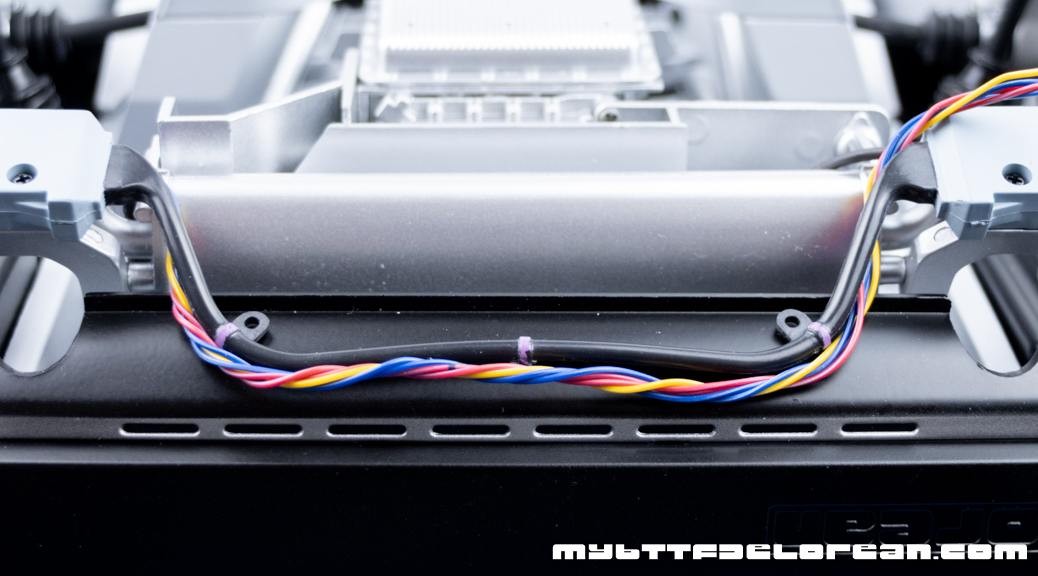 EL Light Mod change: On the right side, I cut the bundle down and fed the remaining wires into the same slot on the other ‘junction box’: 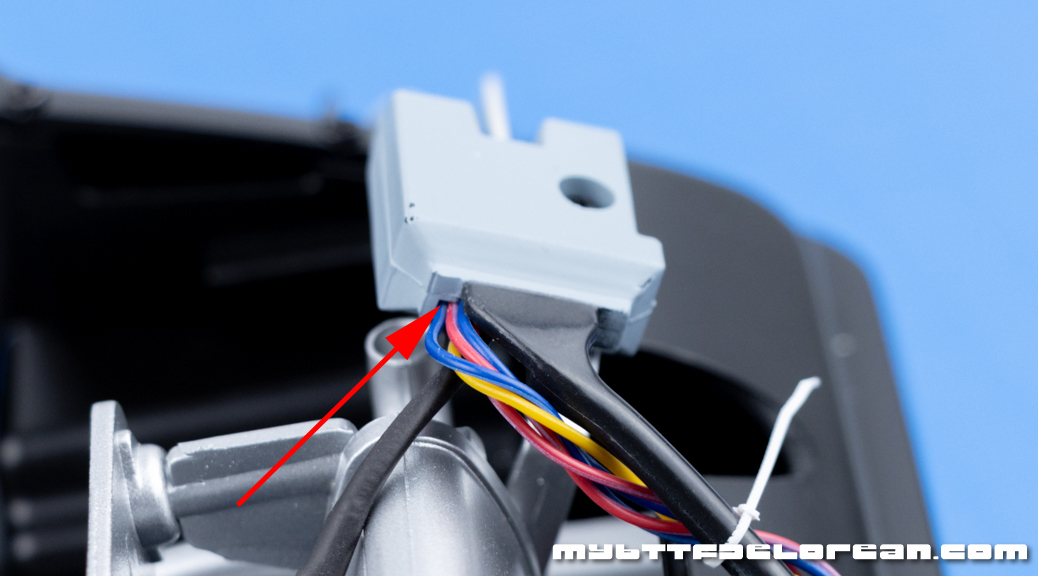 Next, I attached the wire bundle to the Support Bar using white Mini Cable Ties from Mike Lane. These cable ties really make a huge difference! 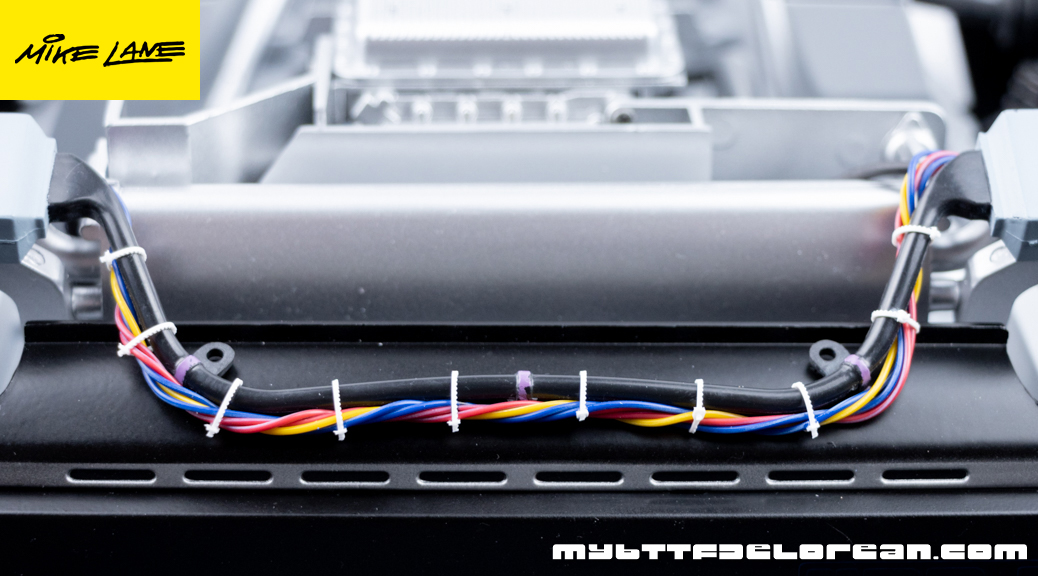 Finally, I attached the Support Bar to the lower bumper as per the instructions. I did have to rotate the Connectors towards the back of the car to align these two holes. Also, be warned, I cracked both tabs under the screw heads here, so do not tighten these screws that much! 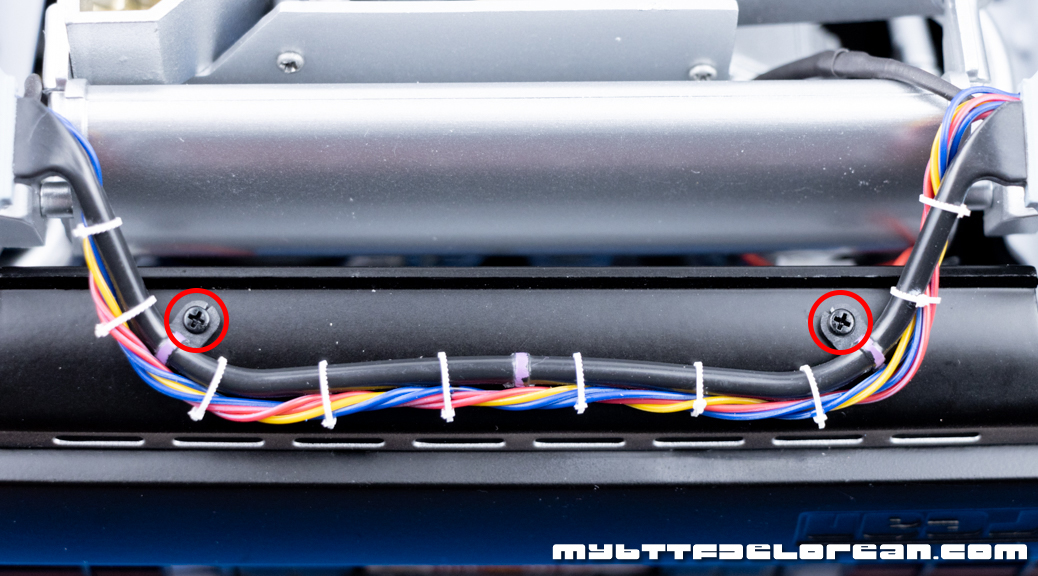 On the passenger side, find the exposed plug for red/blue Wire 23 and connect it to the plug of the LED Wire matching the color-coding.

I do not have this wiring, so there are no pictures for the rest of this issue’s steps.

On the driver side, find the exposed plug for red/blue Wire 22 and connect it to the plug of the LED Wire matching the color-coding.

Align the LED Wires along the Support Bar.

If you spiraled these in Step 11, so this was already complete.

Using the Wire Tie, secure the LED Wires to the Support Bar in the center. You may need pliers to twist this tight.

Cut off the excess Wire Tie, leaving a nice tie.

The remaining portion of the Wire Tie is used in the next steps.

Repeat securing the LED Wires to the Support Bar four more times, as shown. Dispose of any leftover Wire Tie.

Tuck the plugs and any remaining wire up inside the body and out of sight.

I feel like this actually turned out really good and is pretty close to the real film car! I do apologize for not having many of these steps illustrated, but with the body and chassis of the car now connected, I can’t get inside to display both stock and modified versions. On a high note though, we never have to turn the car upside down again after this issue!