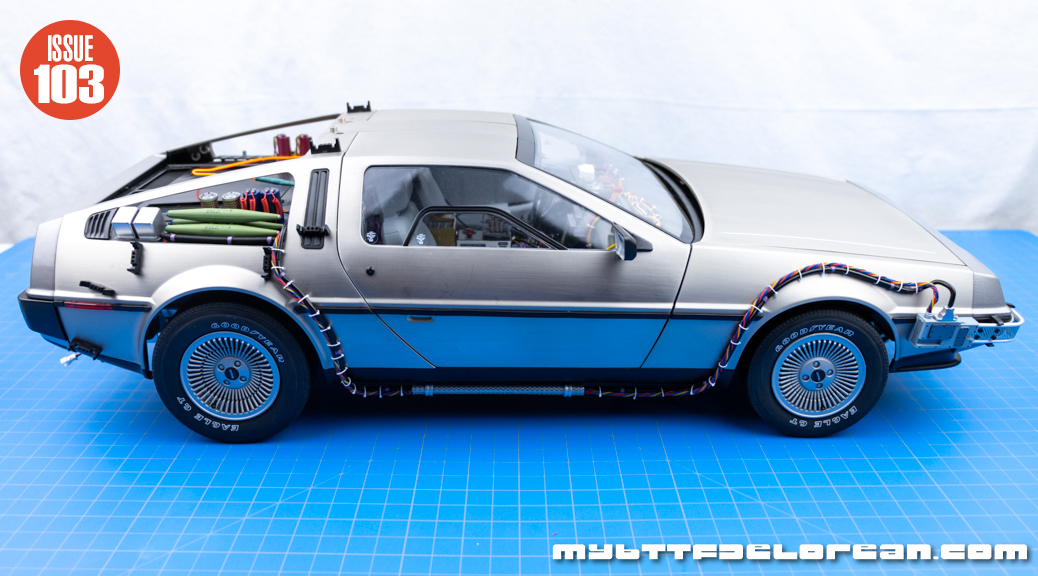 “Add another cable and a bundle of multicoloured wires to your DeLorean.”

This issue is near copy of Issue 101, just on the other side of the car. You can reference that issue for additional details. Materials: The Mesh is photo-etched metal, and the rest of the parts are plastic. Cable and Wires, Right Side

Align the three holes along one side of the Mesh with these holes in the Tube: Carefully roll the Mesh around the Tube until the holes on the other edge of the Mesh align over the first. Secure the Mesh to the Tube with three (3) MP screws.

I did this in a little different way to make sure the ‘roll’ was straight. First, I secured the outer two screws to hold the Mesh in place, then rolled the Tube over the Mesh: Next, I removed end one screw, rolled the Mesh at that end to align the holes, and replaced the screw: Then, I removed the other end screw, finished rolling the Mesh, and inserted both remaining screws: Slide a Bracket over each end of this assembly, as shown.

These Brackets are not symmetrical, so make sure they both are added in the same orientation: Retrieve your DeLorean and carefully turn it upside down. Align the holes in the Brackets to these holes under the driver’s side edge of the car as shown, and secure with two (2) KM screws.

I rotated the Tube/Mesh inside the Brackets so the screws were hidden behind it. This is also your friendly reminder to try using 3-in-One Oil on all screws going into metal: These Brackets will only sit flush to the bottom of the car in one way. If it doesn’t sit right, flip the Tube around. Also, once these are secured, the Tube/Mesh can slide through the Brackets fairly easily. I just centered it between them: Push the pins of the longer Cable (103E) into the matching holes of the Right Side Rear Panel, as shown: Fit the pin on the end of the shorter Cable (103F) into the hole at the top of Cable (103E) and route the other end as shown: Fit the pin on the straight end of Cable (103F) into this hole of the Front Body Rear Panel: Locate and unwrap this multicolored Wire Loop (83K) we left in place back in Issue 83. Pass the free end along the inner edge of the blue capacitors and out the right side of the car, as shown: I did not use this Wire. See this Mod Zone:

Instead of using the very inaccurate black Wire supplied by Eaglemoss to tie these wires up, I am using the amazing Mini Cable Ties by Mike Lane. I recommend using tweezers and magnifying lenses to add these. As in Issue 101, I tried to arrange them to look like the real car: Carefully push the ends of this front Cable and Multicoloured Wires into this front end of the Tube.

Unfortunately, I did not get a picture of this, but it should be just like the left side of the car. UPDATE: After I completed the car, I installed the Faraday Conduits mod from Model Modz. This issue is where you would want to install them if you are interested: Both sides of our DeLorean are now finished. I love how good this is turning out! We will start on the rear Flux Bands in the coming issues.