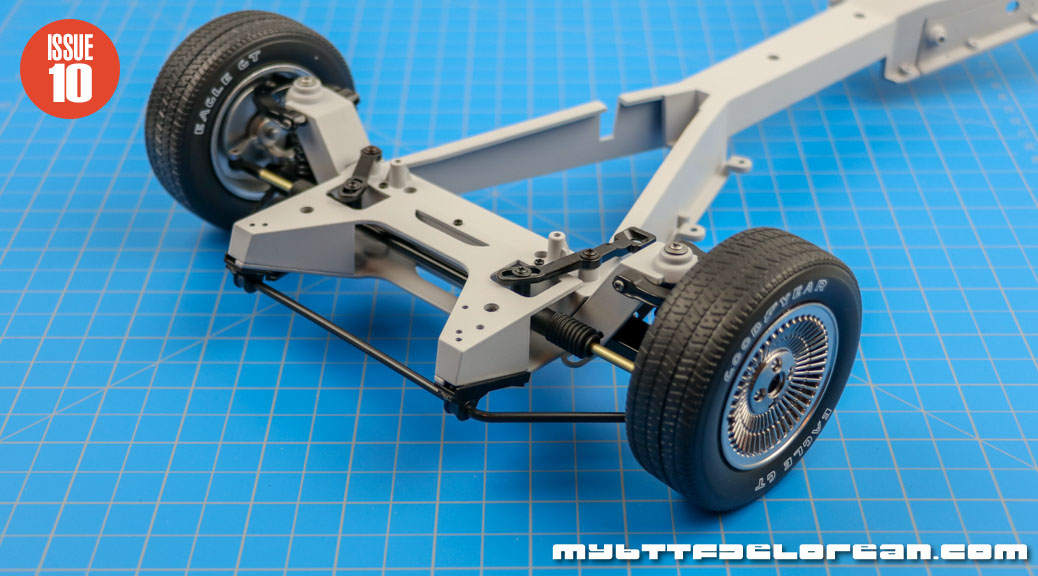 “The parts of the DeLorean received with the stage are the frame and its fixing screws.”

Phillips Head Screwdriver (appears to be size #0 or 2.5mm) 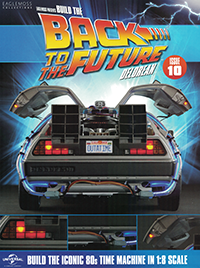 As I have done up to this point in preparation for this issue, I painted the Frame itself with Tamiya Fine Surface Primer in Light Grey. Also, you may notice some brass colored items in this issue I painted back in Issue 07. 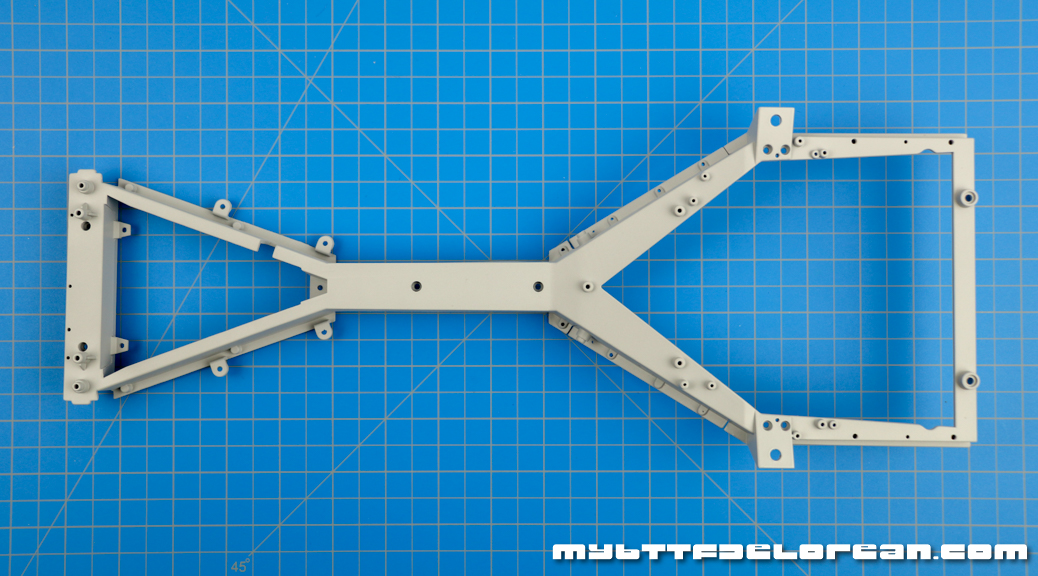 Attach the left front suspension assembly (from Issue 05) to the underside of the Frame using two (2) BM screws. 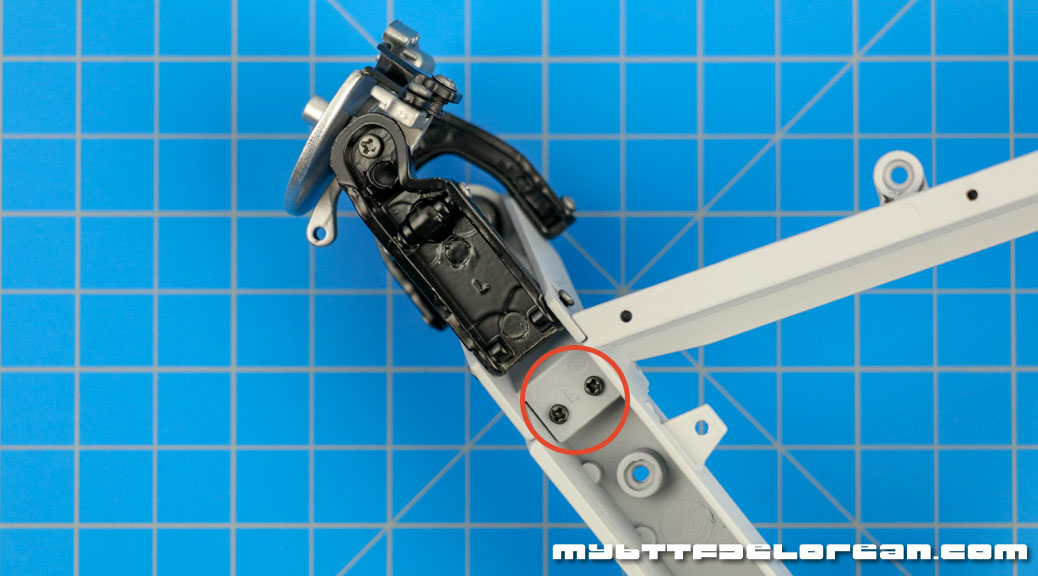 Attach the right front suspension assembly (from Issue 06) to the underside of the Frame using two (2) BM screws: 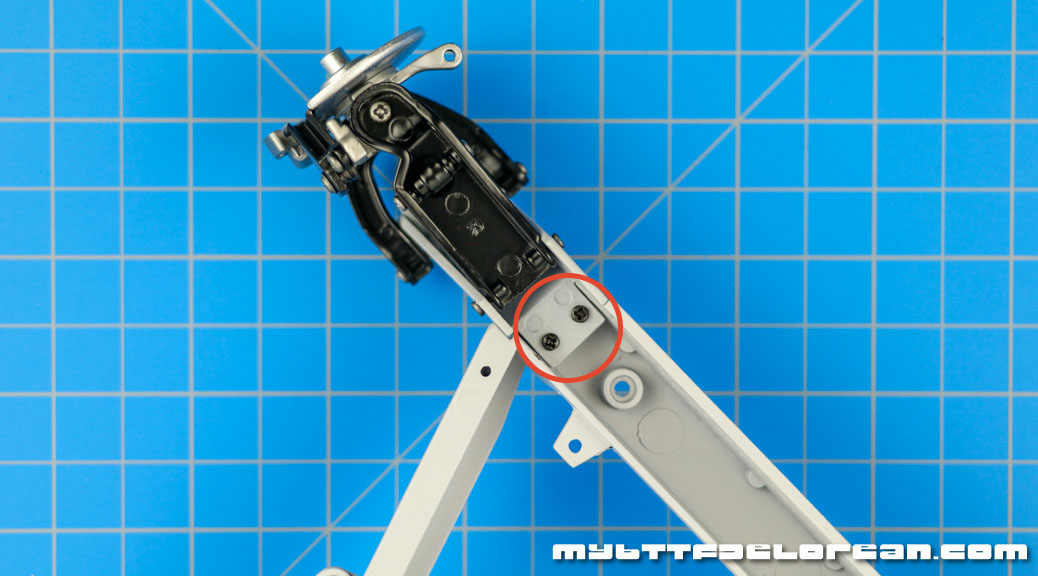 With both suspension assemblies attached, it should look like this: 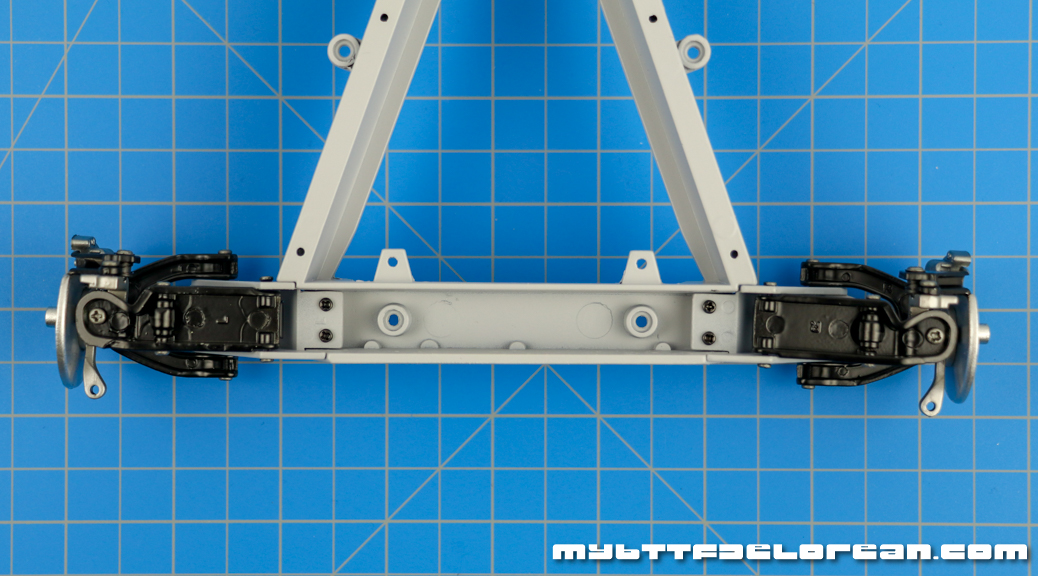 The Front Plate And Steering

Attach the Front Plate (from Issue 07) to the end of the Frame using three (3) AM screws: 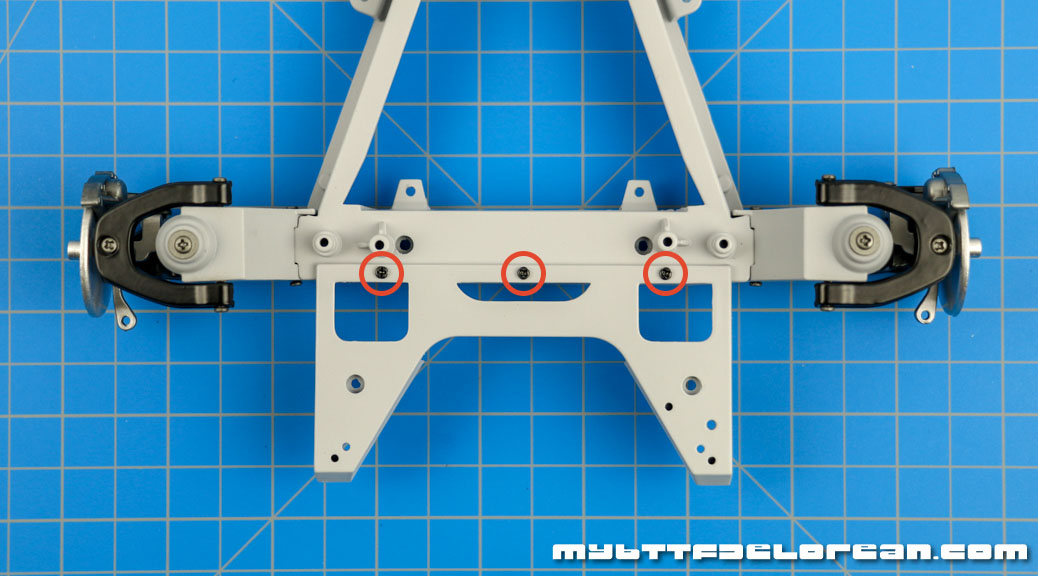 Slide the Pinion and Pull Rod of the Steering Rack (from Issue 07) up through the Front Plate and attach to the Frame with two (2) GM screws.

I made sure these two screws were all the way in, as loose screws here can cause the Pinion/Pull Rod to bind up on the holes in the Front Plate. However, I backed them out just a bit to allow the pieces to move: 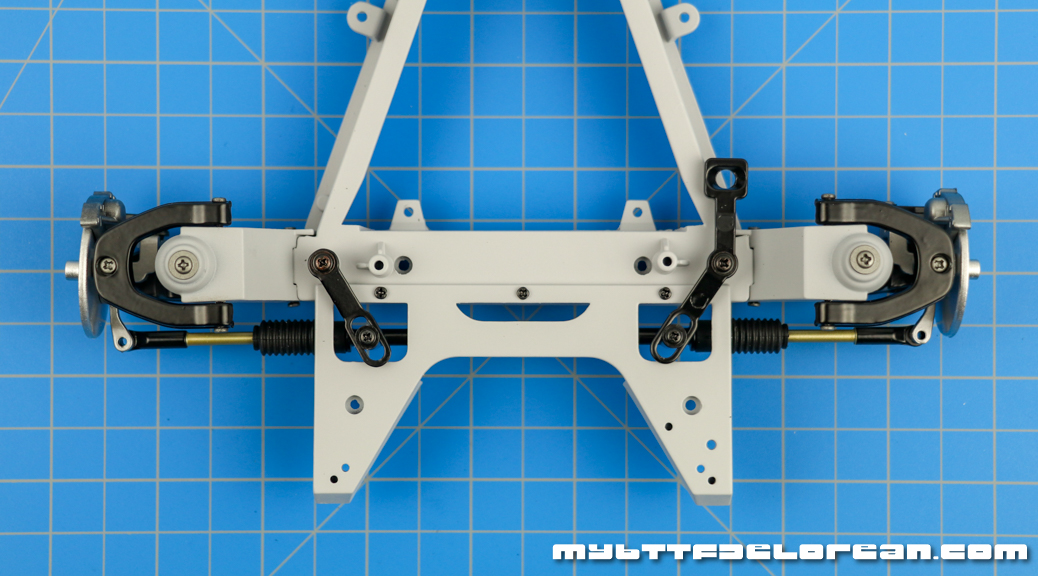 Flip the Frame over and attach the tie rods ends of the Steering Rack to the Left/Right Front Tie Head (steering knuckle/spindle) with two (2) DM screws.

These screws go in really tight, so I pre-threaded the holes and supported the Brake Disc piece that the Steering Rack attaches to (I had heard that others have broken this off). Pre-threading makes actual assembly much easier. I tightened these all the way, then backed off a bit to allow movement. Do be aware that these will may back themselves out as you handle the model as I had to tighten them again later in the build. 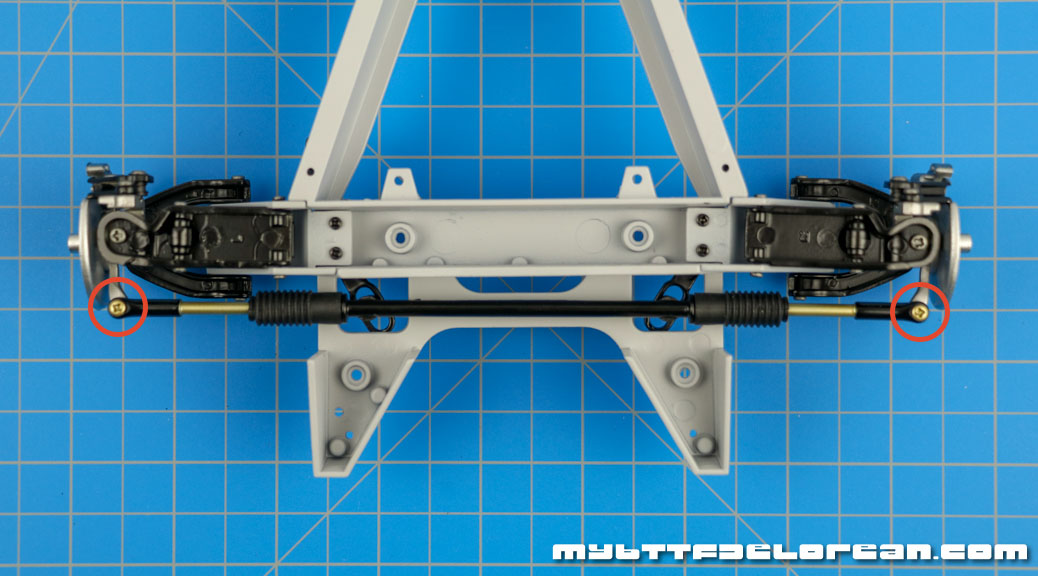 Place the Bottom Plate (from Issue 08) into position: 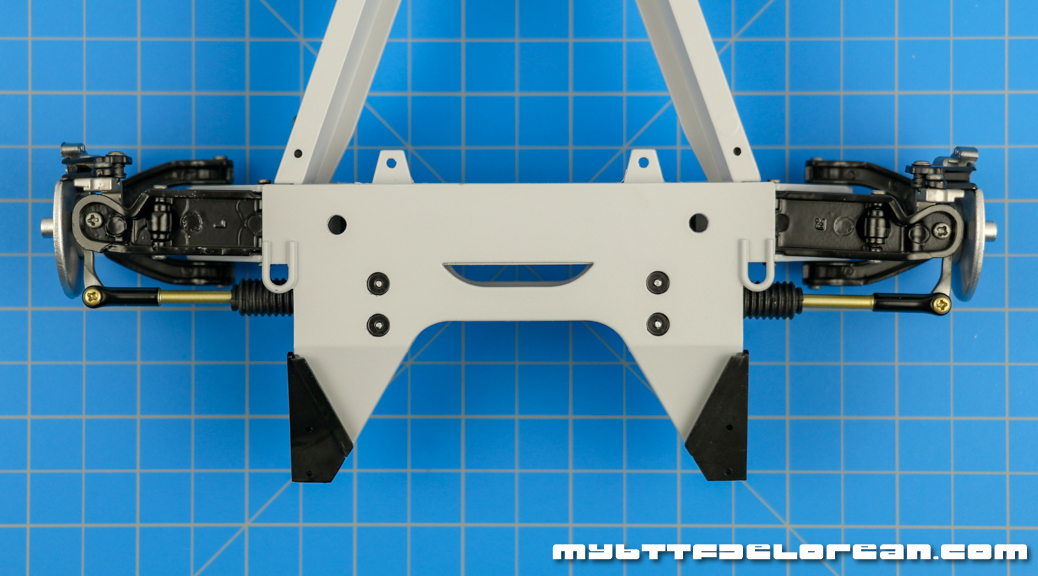 Then turn it all over again and attach it to the Front Plate and Frame using four (4) DM screws: 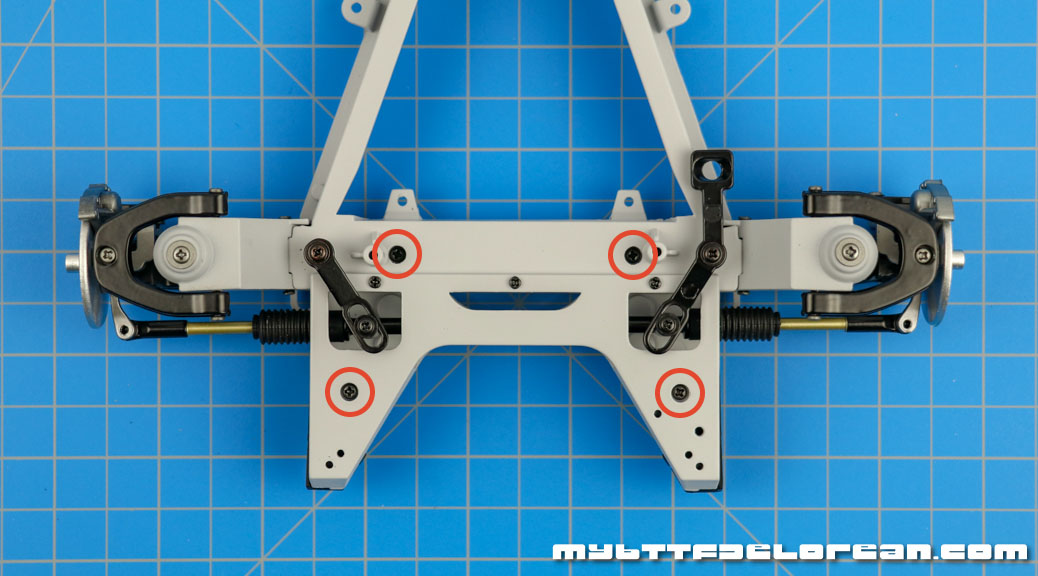 Turn it all over again, then slide the ends of the Anti-Roll Bar (from Issue 08) into the holes on the Lower Links. Attach to the Bottom Plate with four (4) AP screws: 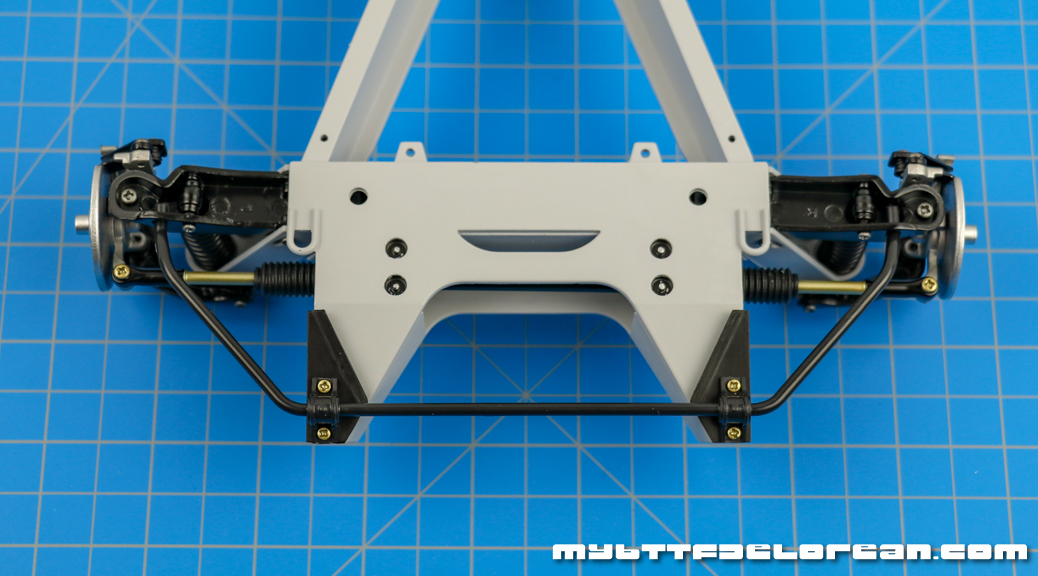 Attach a front wheel assembly (from Issue 03 and Issue 09) to each Brake Disc the using one (1) GM screw.

If you previously pushed the Hub (DMC center cap) into the wheels, you can poke them out with the screwdriver. Try not to lose the washer! The GM screw goes through the washer, then the wheel, then into the Brake Disc. Others have had issues with these wheels being wobbly, but I was able to tighten them enough to barely turn and not wobble at all. I don’t need the wheels to freely turn as this will be a static model.

Finally, I recommend to not put the Hubs back in yet since the wheels may loosen as the build continues and getting the Hubs out again is not easy once the wheels are mounted. An even better solution is to replace all your Hubs with Mike Lane’s Magnetic Wheel Caps! 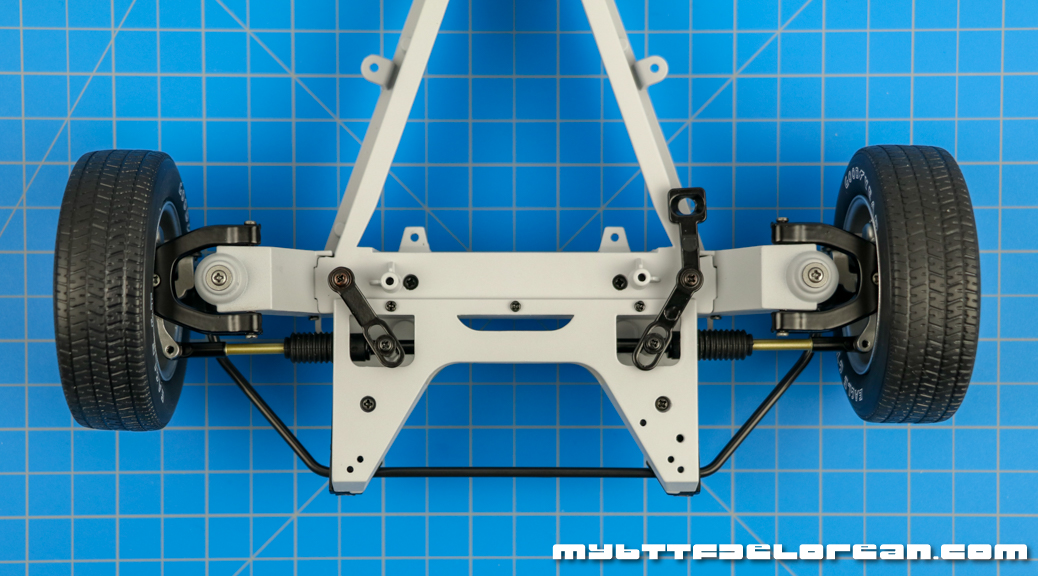 Now we are getting somewhere! The Frame is solid metal and, with all these bits added, this assembly now weighs about 2 Lbs (0.9 Kg). Plus, we are starting to get a good idea of how big this model is going to be. There is still a long way to go…