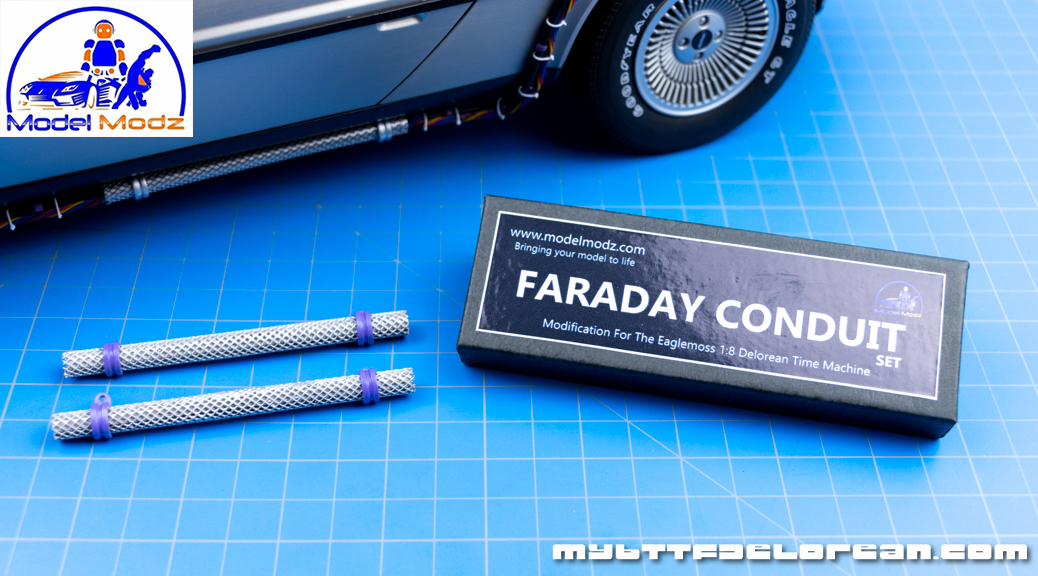 Below the doors of our Eaglemoss 1:8 scale Back to the Future DeLorean

model are these mesh tubes (conduits), seen here on the ‘A’ Car: 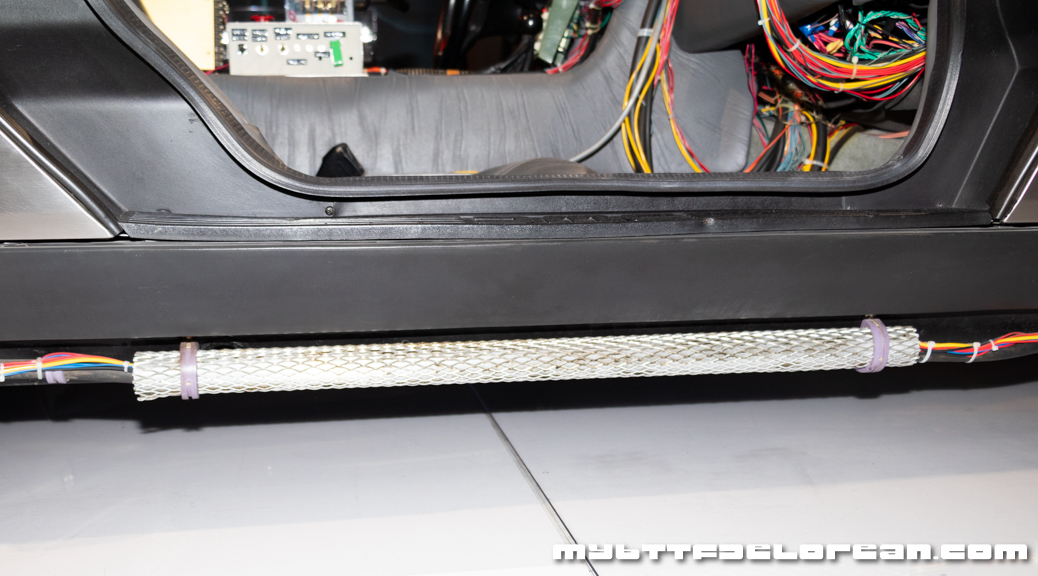 The tubes supplied by Eaglemoss have two things that bug me. First, our tubes should be about 1/2″ forward from where they have us mounting them. Unfortunately, there is not much we can do about that other than drill and tap new holes in the floorboard.

The second thing is the size of the tube and the colors of the clamps. This we *can* fix thanks to Model Modz! They have just starting selling a set of replacement Faraday Conduits. These consists of a pair of metal tubes with a 3-D printed mesh exterior. Two purple clamps are then slid over the mesh to allow mounting to the car using the original screws.

Remembering back to Issues 101 and Issue 103 where we installed the original tubes, we will need to flip the car upside down. I recommend taping the hood and doors closed beforehand and putting the model on a soft towel.

Then, we just have to temporarily remove these two (2) KM screws, remove the stock tube, and put the new Model Modz version instead: 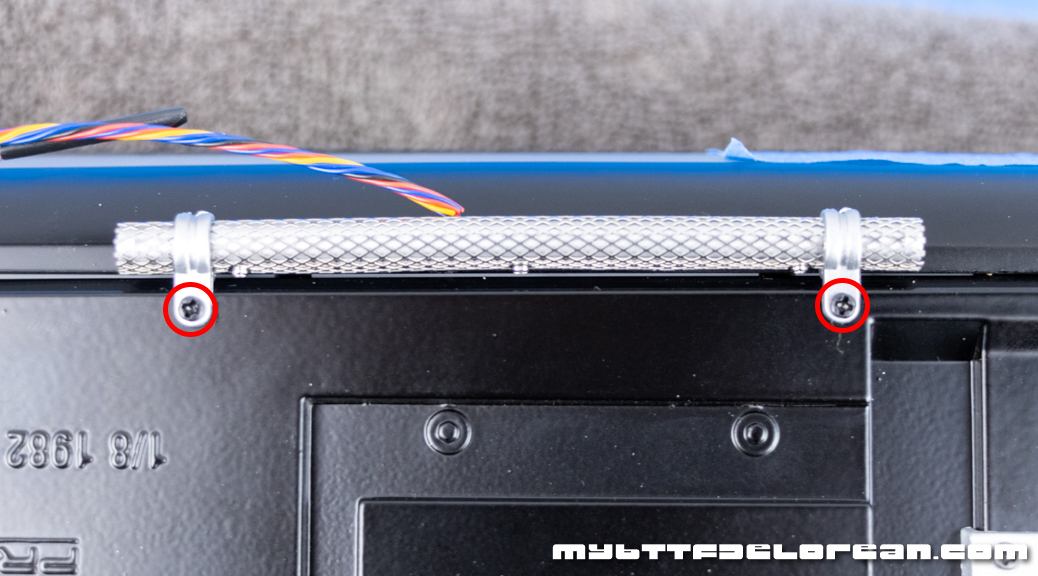 After tucking the wires back into place, you can repeat this on the other side. Then, when you flip the car back upright, the tubes look like this: 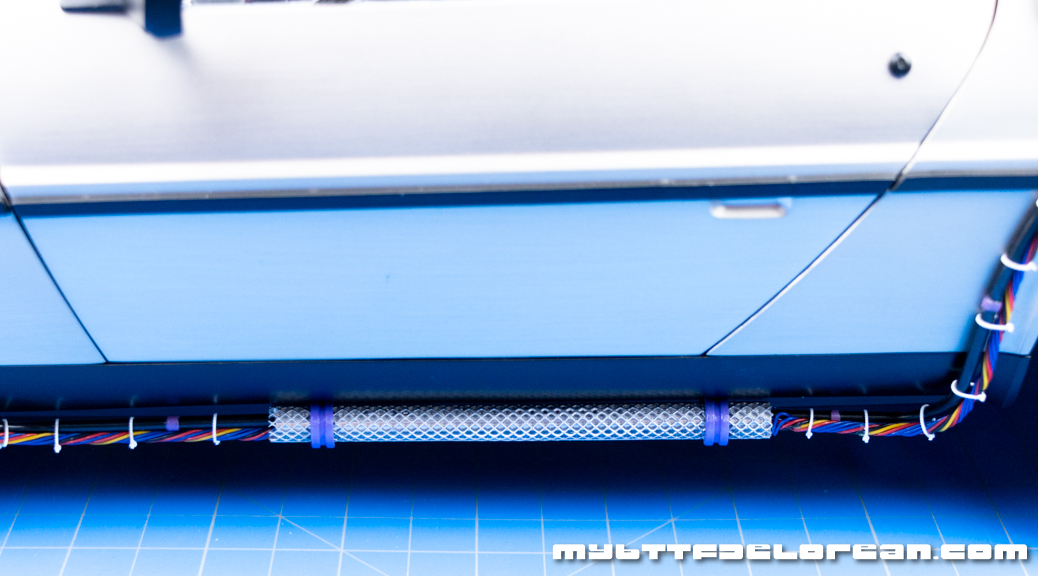 And that’s it! When you compare the two tubes against each other, you can really see the improvement: 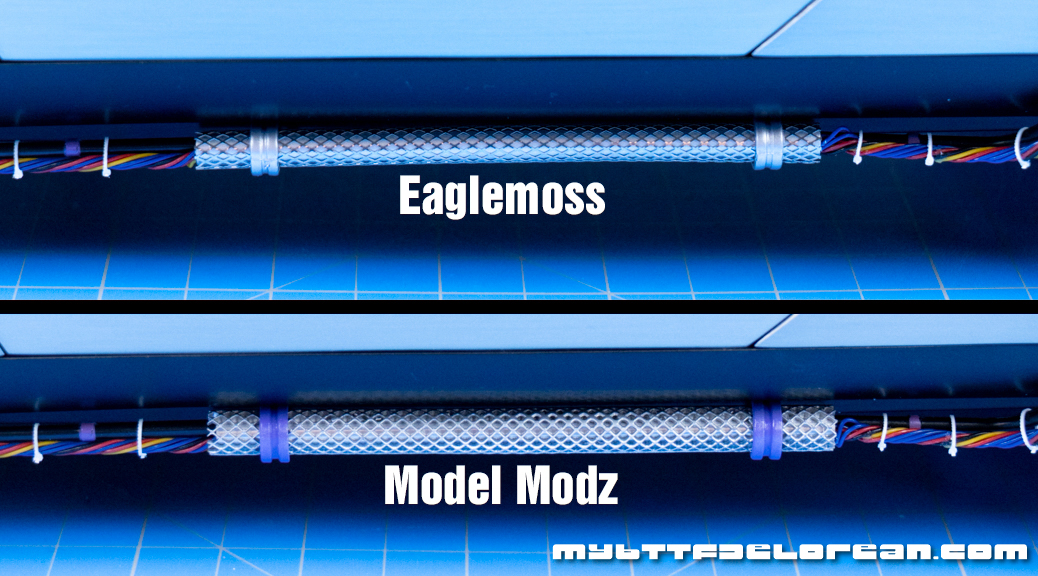 Model Modz is always striving to bring us some of the best mods for our partwork builds and this one is no different. I think these new Faraday Conduits are great and I really love the purple clamps. A big shout out to Chloe and her crew for helping to make our models really come to life, thank you! 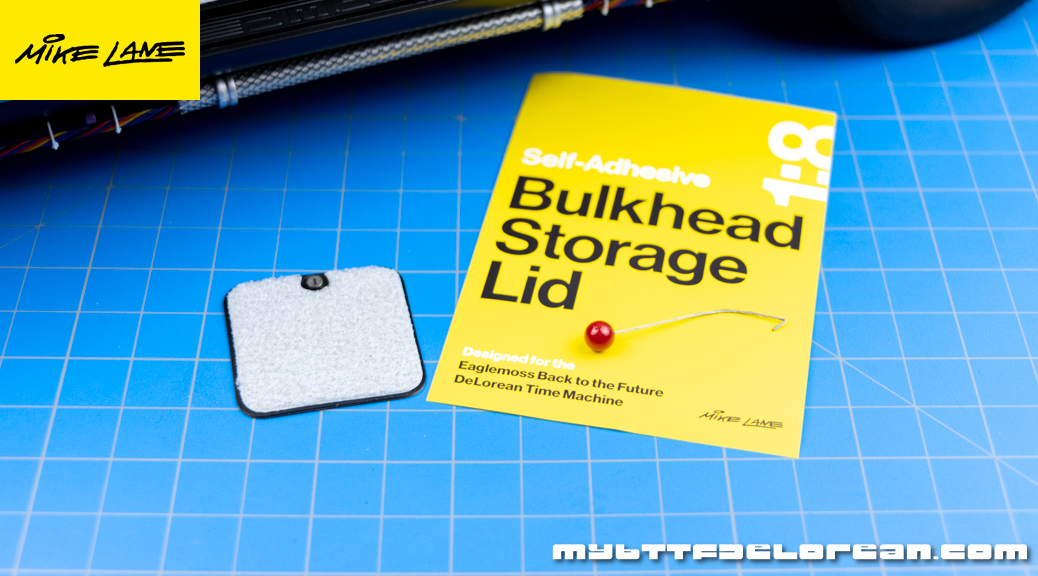 Behind the driver’s seat on a real DeLorean is a small lockable storage compartment. You can see it clearly in this photo of the actual ‘A’ Car, even though Eaglemoss neglected to include it on their 1:8 scale Back to the Future DeLorean 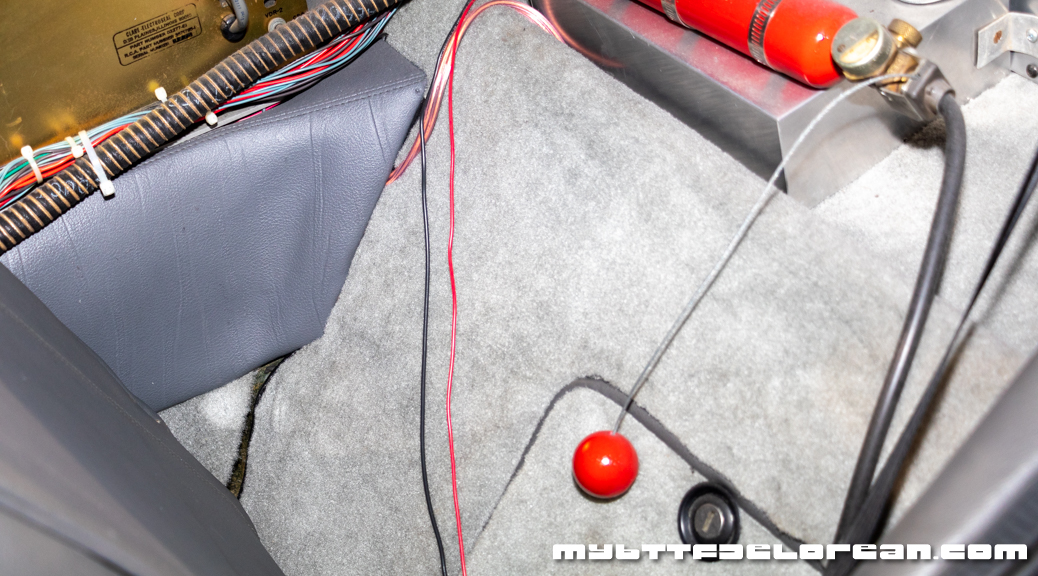 While this may seem like a minor oversight, it also meant that Mike Lane could give us yet another fantastic detail mod for our DeLorean! This is his Bulkhead Storage Lid with ‘Bailout’ Ball and Wire mod:

Thankfully, installing this mod is as simple as peel-and-stick (even after the model is completed as you see here): 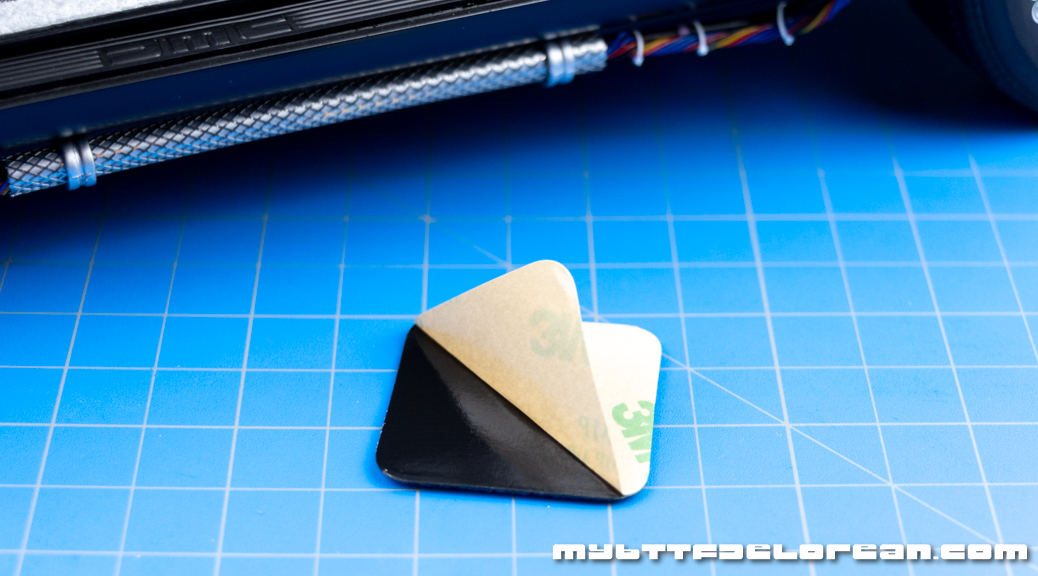 To better match the real car, I actually placed this all the way down the bulkhead (towards the ground) and as far to the left side of the car as possible. This meant the lower edge of the Bulkhead Storage Lid did not follow the angled part of the lower bulkhead and stuck straight out. However, the adhesive is good enough that I only needed to run my finger along the bottom and it bent and stuck to the bulkhead just fine, as seen here: 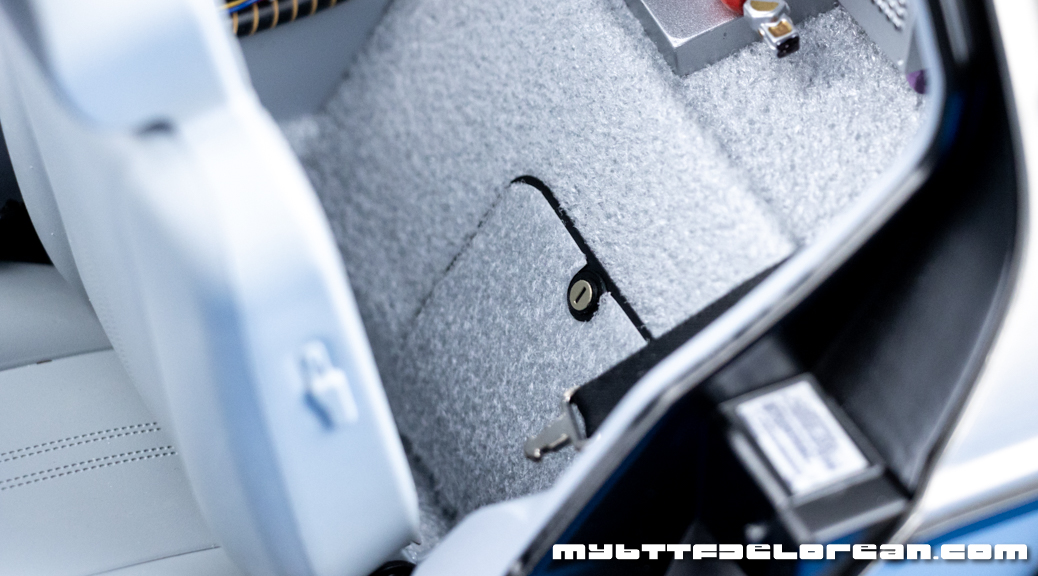 As a special bonus, Mike Lane also includes a replica ‘Bailout’ Ball and Wire. This ball does exist on the real car, attached to the red bottle on the rear bulkhead, as shown below. This particular prop is an O2 bottle that was used by aircraft pilots that needed to eject or ‘bailout’: 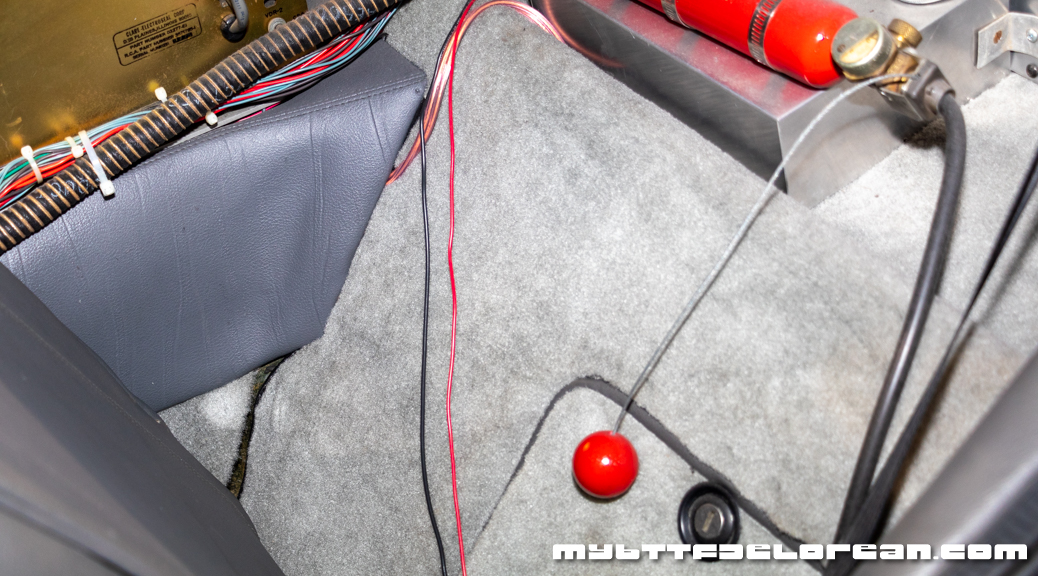 Since I had already completed the car, drilling a small hole in the gauge end of the bottle was near impossible. Instead, I came up with an alternate solution. I used a lighter to heat the end of a piece of 22 gauge Craft Wire I had inserted into the end of my Pin Vise Hand Drill. If you chose to do this, it is at your own risk as you could easily burn yourself, so please be careful! 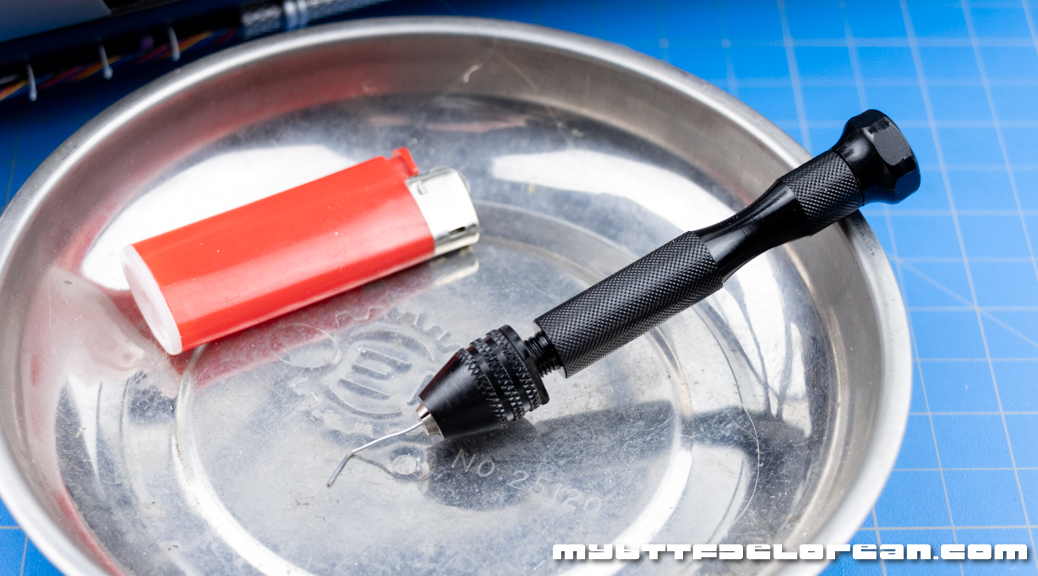 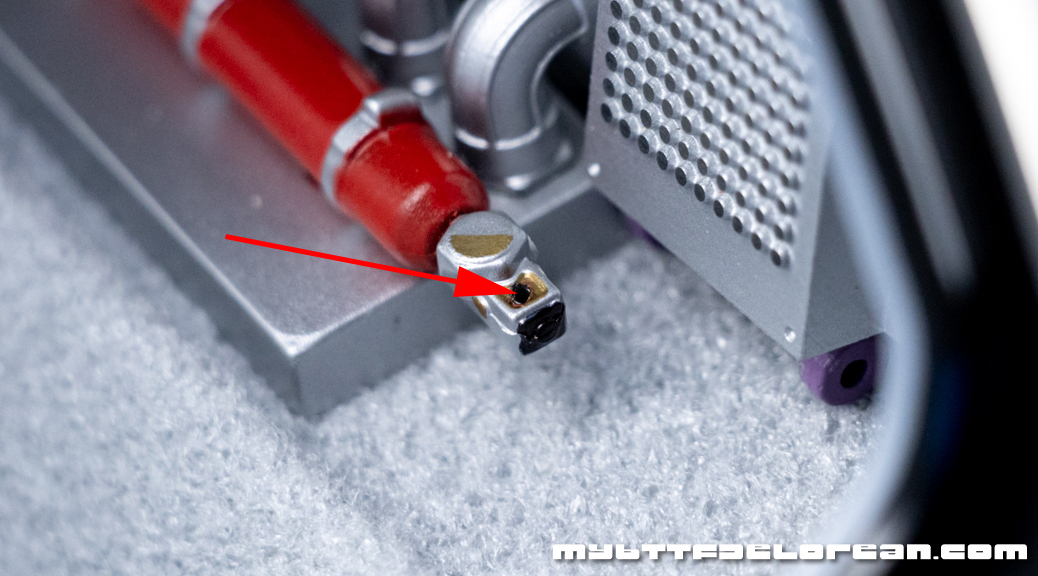 This hole was the perfect size to then super glue the wire end of the ‘Bailout’ Ball and Wire into place: 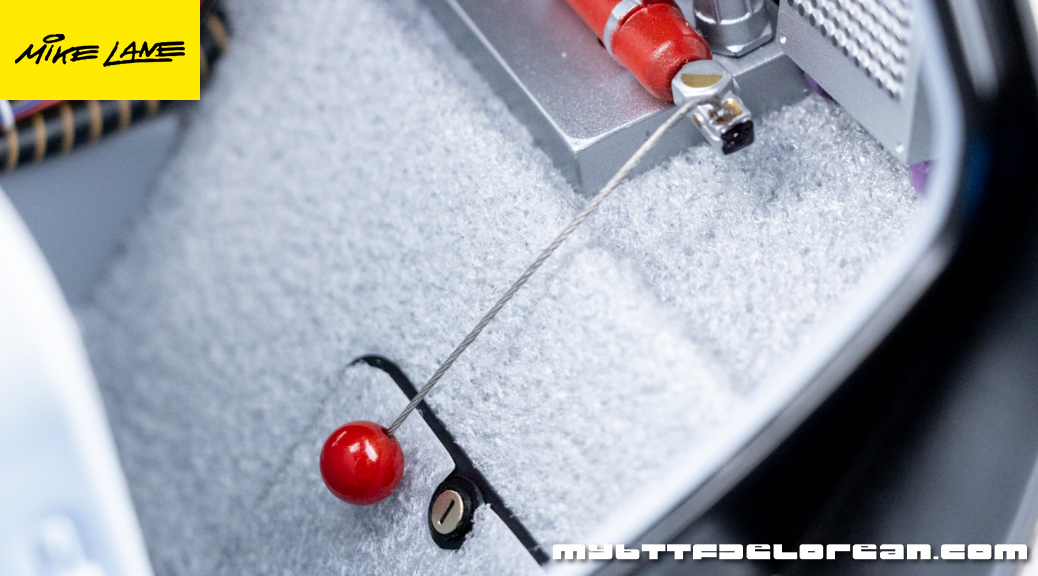 When I compare the final picture of this Bulkhead Storage Lid with ‘Bailout’ Ball and Wire mod to the real car, it is almost the exact same! This is a quick and simple mod and looks great. Thanks again to Mike Lane, keep them coming! 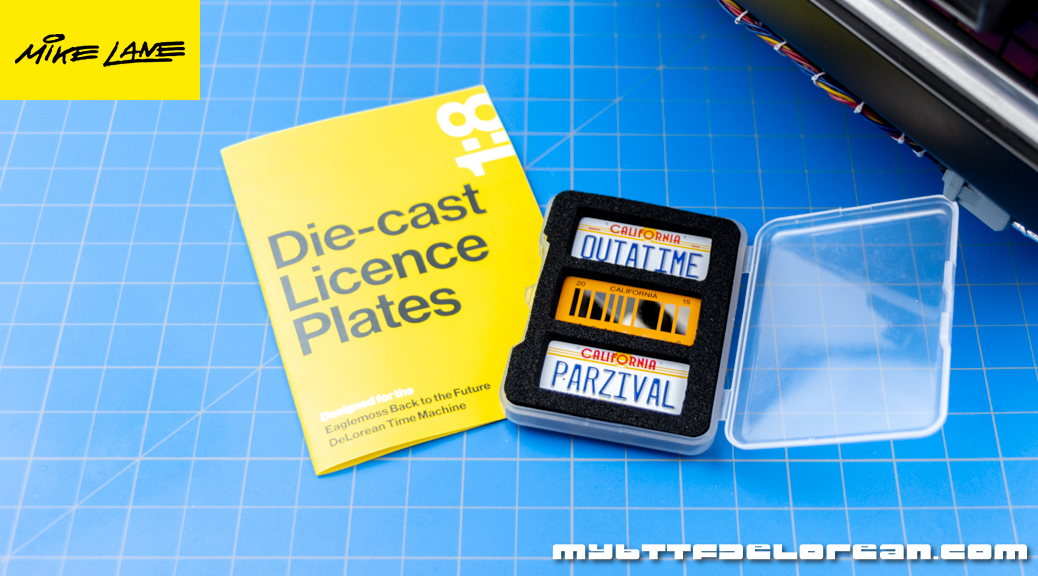 If we go all the way back to Issue 01 of this Eaglemoss 1:8 scale Back to the Future DeLorean

partwork build-up, you can find my very first Mod Zone where I installed the original plastic Magnetic Licence Plates from Mike Lane. Since then, Mike has upgraded this product! Now, his new Die-cast Licence Plates come with three plates in a nice storage case (including the more recent Ready Player One version). All of these plates are metal:

As I am keeping with the original film, I chose to use the OUTATIME version. Accurate registration stickers are included and must be applied: 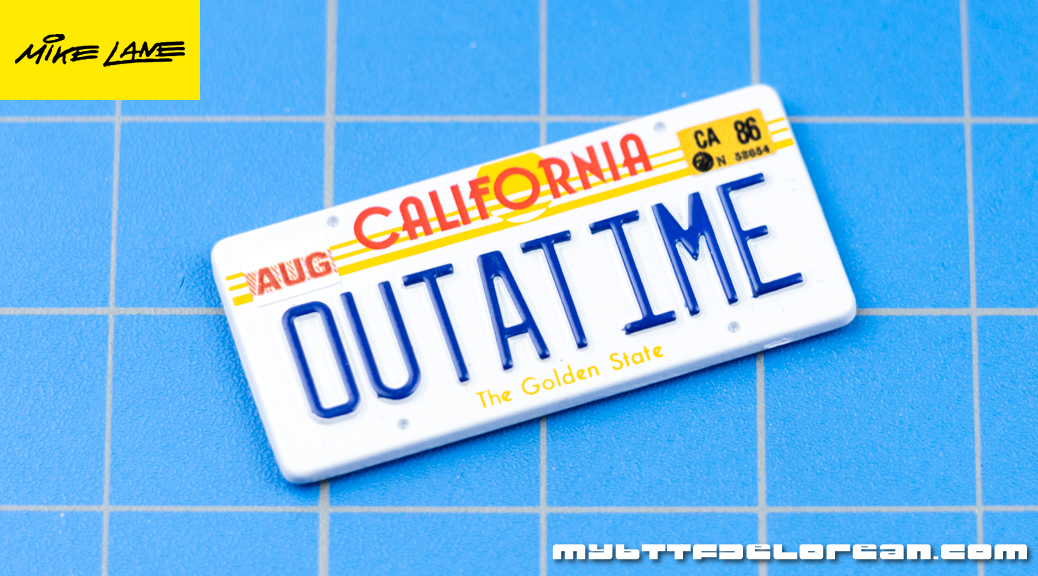 These new plates are then attached in the same way as the originals. There are two options: either we can stick them in place permanently, or use the included adhesive magnetic sheet like I did: 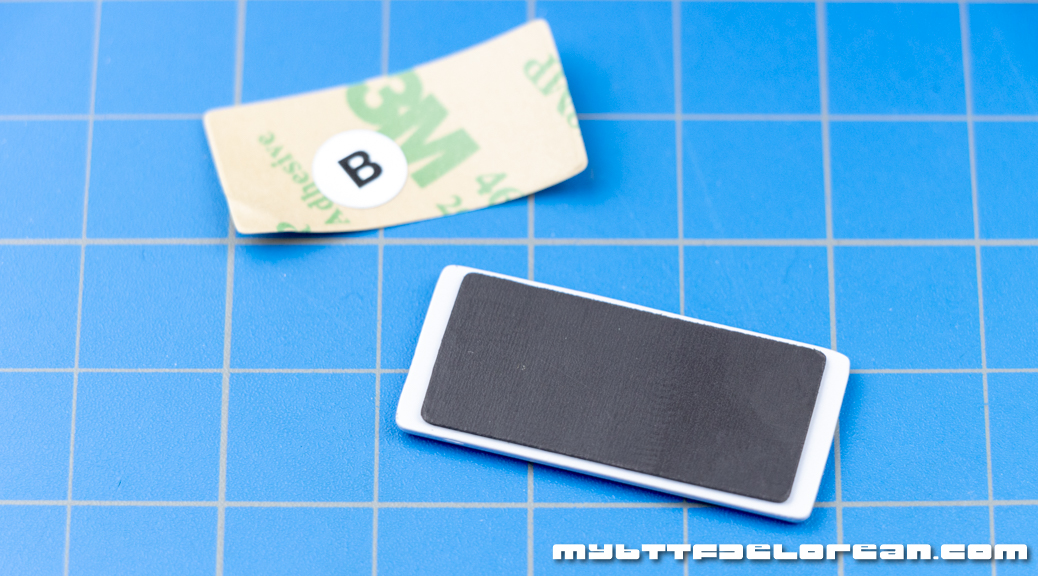 I already had the other magnetic sheet from the original plate still installed in the bumper recess, so I did not need to install the new one: 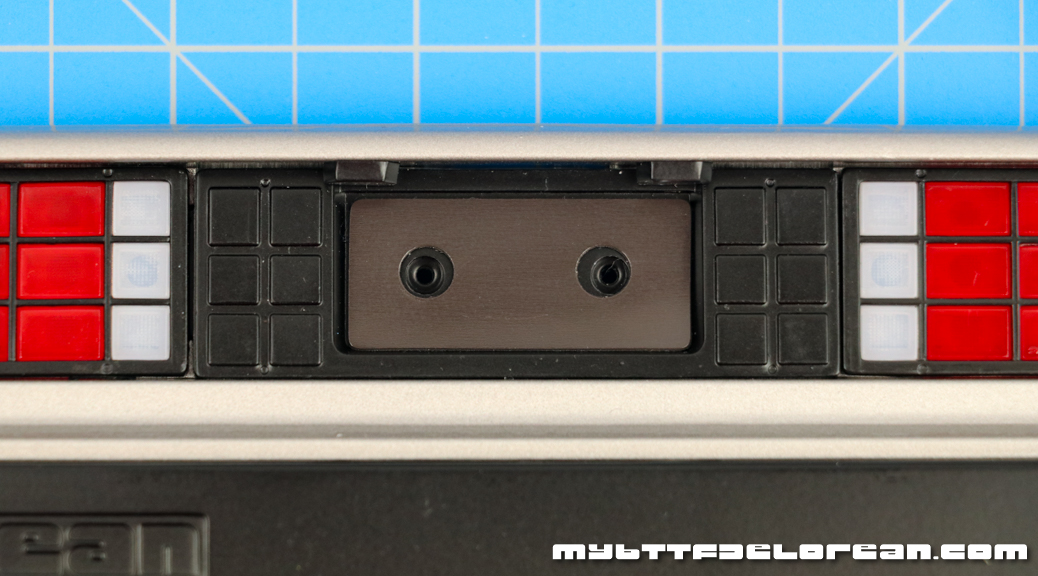 Therefore, all I needed to do was get these magnets together and, poof, the new die-cast plate is installed. Doesn’t it look amazing! 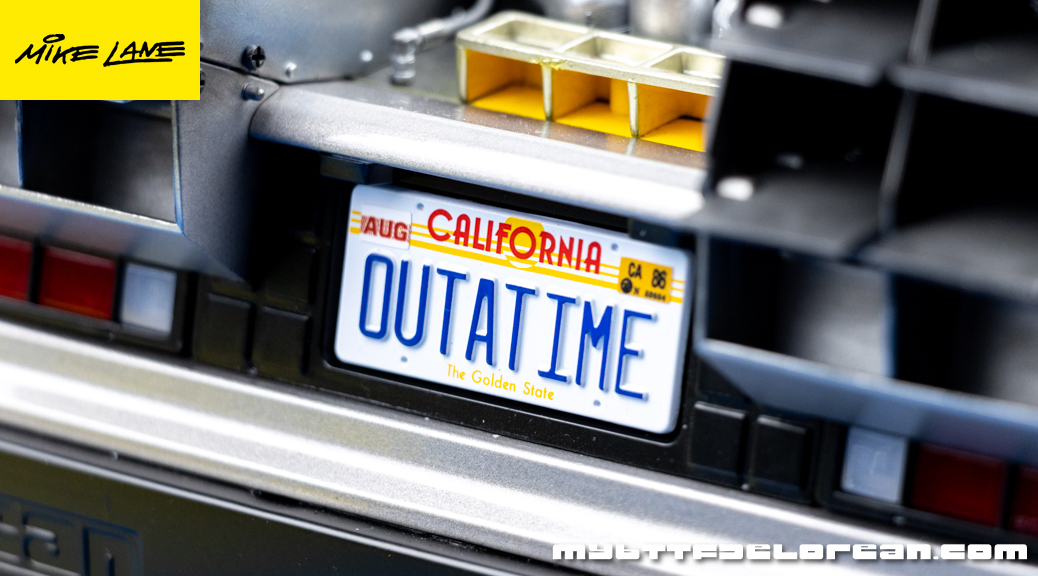 Removing these metal plates, or swapping them, is easily done with the included removal tool (guitar pick).

While these look nearly identical to the previous plastic plates, they have much nicer raised lettering. This means they are even more accurate to the license plates on the real car. I am extremely happy with this mod. Furthermore, I really appreciate that Mike Lane not only comes out with new products, but goes back and improves on the ones he already has. That is someone who loves what they do. Thank you fine sir!