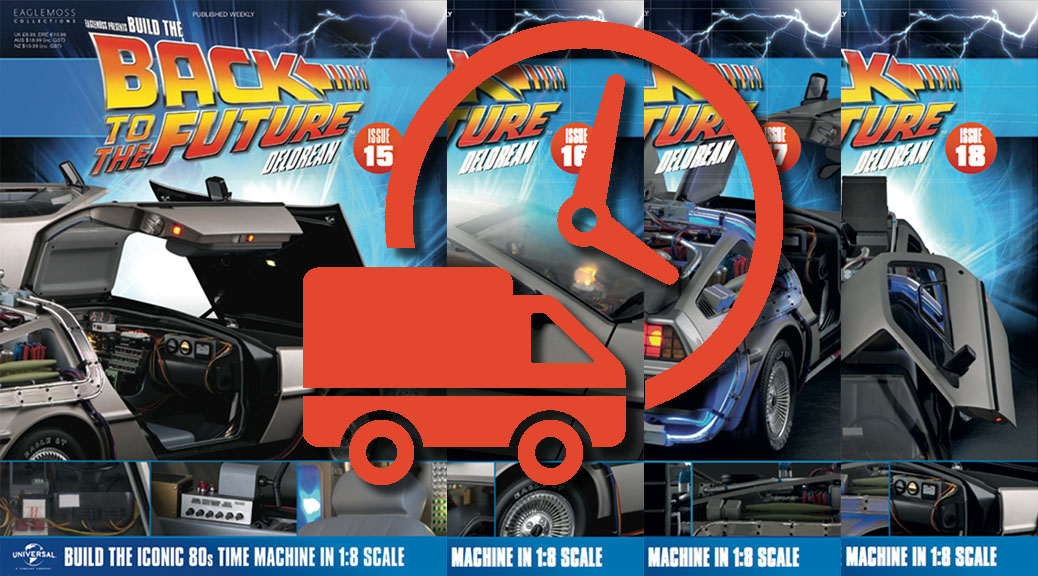 My February 2019 shipment of Issues 15 through 18 of this Eaglemoss 1:8 scale Back to the Future DeLorean did not show up as expected. They should have shipped about 10 days ago, but I didn’t hear anything. I reached out to Eaglemoss yesterday and they apologized and said they would ship the first week of March. It seems they are trying to make sure people get the correct manual transmission parts (the build originally shipped with incorrect automatic transmissions). I commend them for this and am willing to wait to get the right pieces. They also said at the time this delay will not affect my March shipment.

UPDATE: On March 8, I received my delayed February shipment with the correct manual transmission. The total delay was exactly 3 weeks. My March shipment should go out normally around March 15th.

UPDATE: My March shipment was also delayed until March 26 and arrived on April 4th. It appears the transmission parts delay pushed my entire subscription back three weeks as the April shipment is now scheduled for April 16th. Good times! 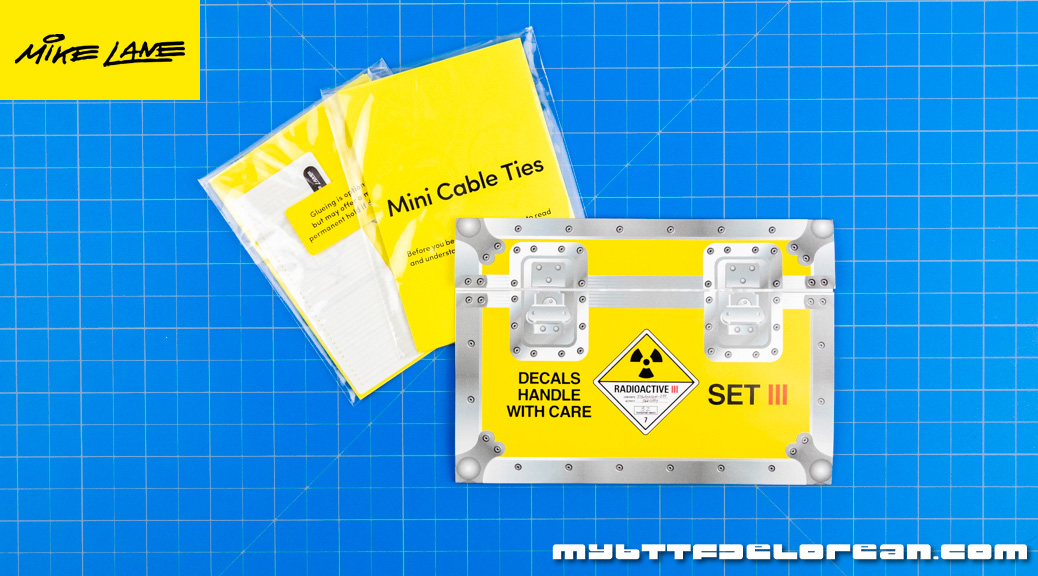 I cannot seem to get enough of the modifications Mike Lane creates for our 1:8 scale Back to the Future DeLorean model.

I had been racking my brain thinking of ideas on how I would tie up the decorative wiring when I got to those issues. And wouldn’t you know it, Mike comes along and creates 1:8 scale Mini Cable Ties in both white and black! I was ordering his Decal Set III anyway, so I picked up two sets of the cable ties in white.

I have since gone back to my Issue 02 and Issue 04 pages and added some of his mods such as: the rear bumper vent decals (Decal Set III) and the reactor lid radioactive symbol transfer (Decal Set II), respectively.

Head on over to the new Mike Lane Mods website to get yourself a treat too! 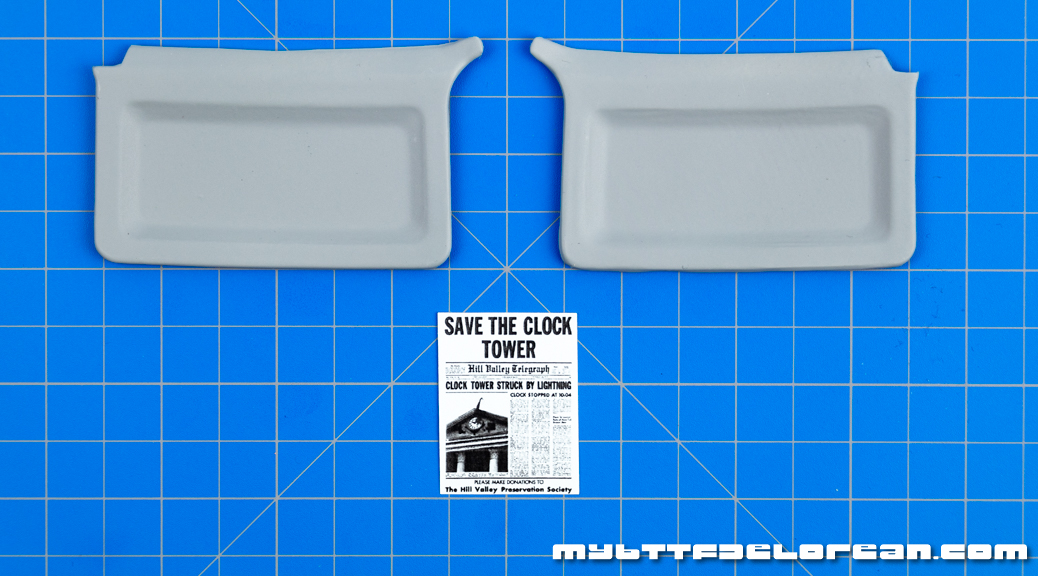 Thanks to the wonderful people over at the Build the BTTF DeLorean – 1:8 Custom Parts Facebook group, I was introduced to Bill Will Green. Bill creates a simple, yet fantastic mod for this 1:8 scale Back to the Future DeLorean partwork build-up.

This is a pair of vacuum formed headliners for our model! The stock headliners have four screw heads exposed and, when the doors are displayed open, it is very unsightly. This mod covers them with thin 0.25mm molded polystyrene painted in Plastikote grey primer to better match the interior. They are attached with double-sided adhesive tape that he pre-installs. Bill even includes a 1:8 scale ‘Save The Clock Tower’ flyer with purchase! The picture above doesn’t really show it, but the flyer is printed on the correct light blue paper. If you are interested, reach out to him via Facebook at Bill Will Green.

I am going to keep these safe until I receive Issues 70 and Issue 74 when the doors are installed. Thank you Bill! 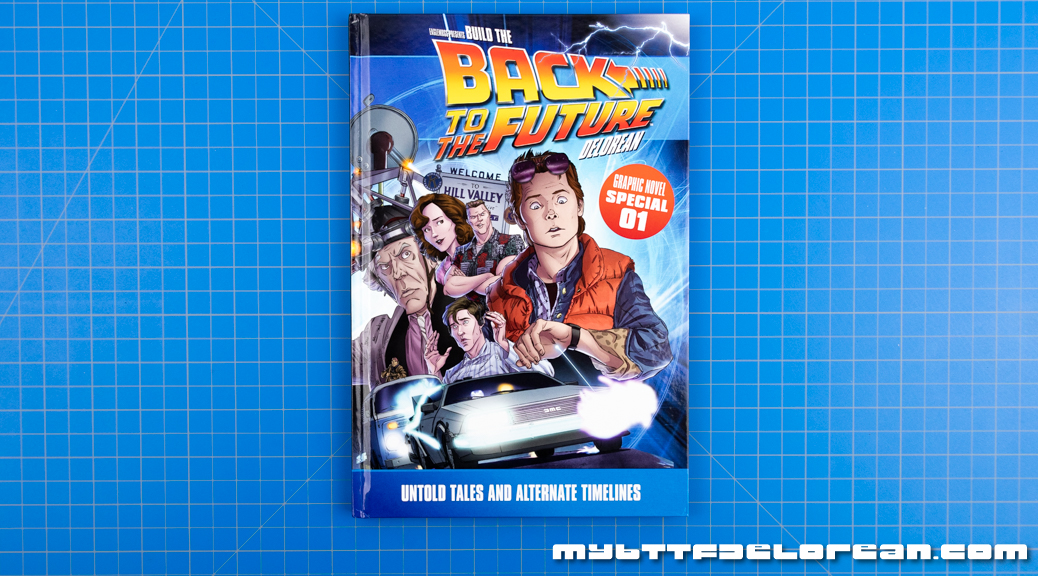 Throughout the subscription build of their 1:8 scale Back to the Future DeLorean model, Eaglemoss offered three ‘Special Issues’. These issues were automatically sent and were billed in addition to the monthly subscription.

The first of these Special Issues is this collection of graphic novels titled Back to the Future: Untold Tales and Alternate Timelines. It costs $24.95 USD and is the first volume (issues 1-5) of the IDW Back to the Future Comic Series by Bob Gale, John Barber, and Erik Burnham. Eaglemoss describes it as such:

From the Old West forward to the 1980s, from the 21st Century back to the Jurassic Period… and every time in between… Doc, Marty, along with their friends and enemies, embark on time-space continuum adventures of epic proportions!”

The Eaglemoss version is a 64-page full color hard cover book. Inside, there are tales of the adventures of Doc and Marty outside the movies such as: how Doc and Marty met, Doc’s involvement with The Manhattan Project, Biff’s trips in time, Doc’s other inventions, and more. It was a fun read and gave a lot of backstory to many of the characters in the Back to the Future universe.